A narrow passageway allows boats to pass on the northern edge of Antelope Island in Lake Powell, one of the Colorado River’s main reservoirs.

Lake Powell is completely dry at the Hite Marina in Utah.

This map shows a potential pipeline from Davenport, Iowa, to Rock Springs, Wyoming, which would run adjacent to Interstate 80 and deliver floodwater to a tributary of the Colorado River system.

FILE - In this Sept. 11, 2019, file photo, is an aerial view of Lake Powell on the Colorado River along the Arizona-Utah border. A set of guidelines for managing the Colorado River helped several states through a dry spell, but it's not enough to keep key reservoirs in the American West from plummeting amid persistent drought and climate change, according to a U.S. report released Friday, Dec. 18, 2020. (AP Photo/John Antczak, File)

CASA GRANDE — A plan to transfer Mississippi floodwaters into the Colorado River system, once broad speculation, is now seen as a realistic proposal that Arizona state officials want to investigate.

Earlier this month, both chambers of the Arizona Legislature passed a bill asking for the federal government to conduct a feasibility study for the pipeline project.

The pipeline project has been pushed locally by Casa Grande City Councilman Dick Powell, who said he was “thrilled to death” to hear the bill had gone through.

Sen. T.J. Shope, R-Coolidge, described the bill as a “postcard to Congress” that would hopefully generate a discussion among the Colorado River Basin states and in Washington, D.C. The study stage of the pipeline has gotten bipartisan support within Arizona’s statehouse.

“Sometimes these things seem far out conceptually,” Shope said, “but until you explore them, you never seem to know what is possible.”

Powell, who is concerned about the water shortage and effects of excessive groundwater pumping in the area, said that the pipeline would benefit not only the Colorado basin states but represents a novel way of dealing with new weather patterns caused by climate change.

“It has been something that I’ve wanted for the longest time, and it has come to fruition,” Powell said. “But it’s not finished until it’s approved and we start getting some pipe in the ground.”

The “Powell Pipeline” is not the only major water infrastructure plan being considered by state legislators. Shope said that in the latest state budget proposals, there is a $200 million provision to explore how to bring new water into the state.

Shope said that the latter money would be focused on prospects for desalination in the Sea of Cortez. One option would be to use desalination plants to satisfy Mexico’s allotment of Colorado River water, which would in theory keep more water in the CAP system.

Powell said he planned to spend time in Phoenix this week advocating for the bill, along with the House bill’s sponsor, Rep. Tim Dunn, R-Yuma.

“Arizona has long been at the forefront among Western states in supporting water management policies,” Dunn said. “Arizona and the other six Colorado Basin states are in the twentieth year of severe drought and experiencing a severe water shortage. Diverting Mississippi water, which is otherwise lost into the Gulf of Mexico, would also help prevent the loss of human life and billions in economic damages when such flooding occurs.”

The bill — HCM 2004 — was transmitted to the Secretary of State’s Office on May 13 and awaits a decision by the governor.

It was common knowledge in the fall of 2018 that water levels running low at Lake Mead was a harbinger of impending water shortage. On Sept. 2…

MARICOPA — A water park company is considering building in Maricopa, carving out a wet oasis in the desert complete with water slides, wave pools and a lazy river.

PHX Surf has submitted plans for a sprawling 71-acre water park on the southwest corner of Smith-Enke Road and North Loma Road, directly west of the future Estrella Gin Business Center and West Maricopa Village. Referring to it as the PHX Surf Park in the pre-application narrative, developers touted it as a multi-entertainment area including a water park.

“Active entertainment sits at the helm of the PHX Surf Park, tying together retail, dining and hospitality experiences. A broad range of year-round experiences are planned for all ages including surfing, water play, beach play and fitness,” the narrative states.

Of course, the main excitement for many is the draw of a water park. The water park is to feature some traditional elements found at water parks like water slides and a lazy river, and it would also have real sand beaches, an infinity, or “zero-edge,” pool and surfing experiences.

In addition to the water play areas, early descriptions include a spa, a concert stage, grassy lawn seating and retail spaces. Lots for future restaurants make up the north side of the property, and to the south is an RV park and hotel space.

One of the hotel spaces is designed as a “tiny home village” where guests could stay the night in themed huts. Developers envision a nightlife element too, with restaurants and bars staying open in the evenings for surfers and swimmers alike.

“Hospitality will capitalize on patron demand from throughout the state, other nearby areas and internationally, who will come to ‘stay and play’ with direct access to the sand beaches, aquatic experiences and surfing,” the narrative states. 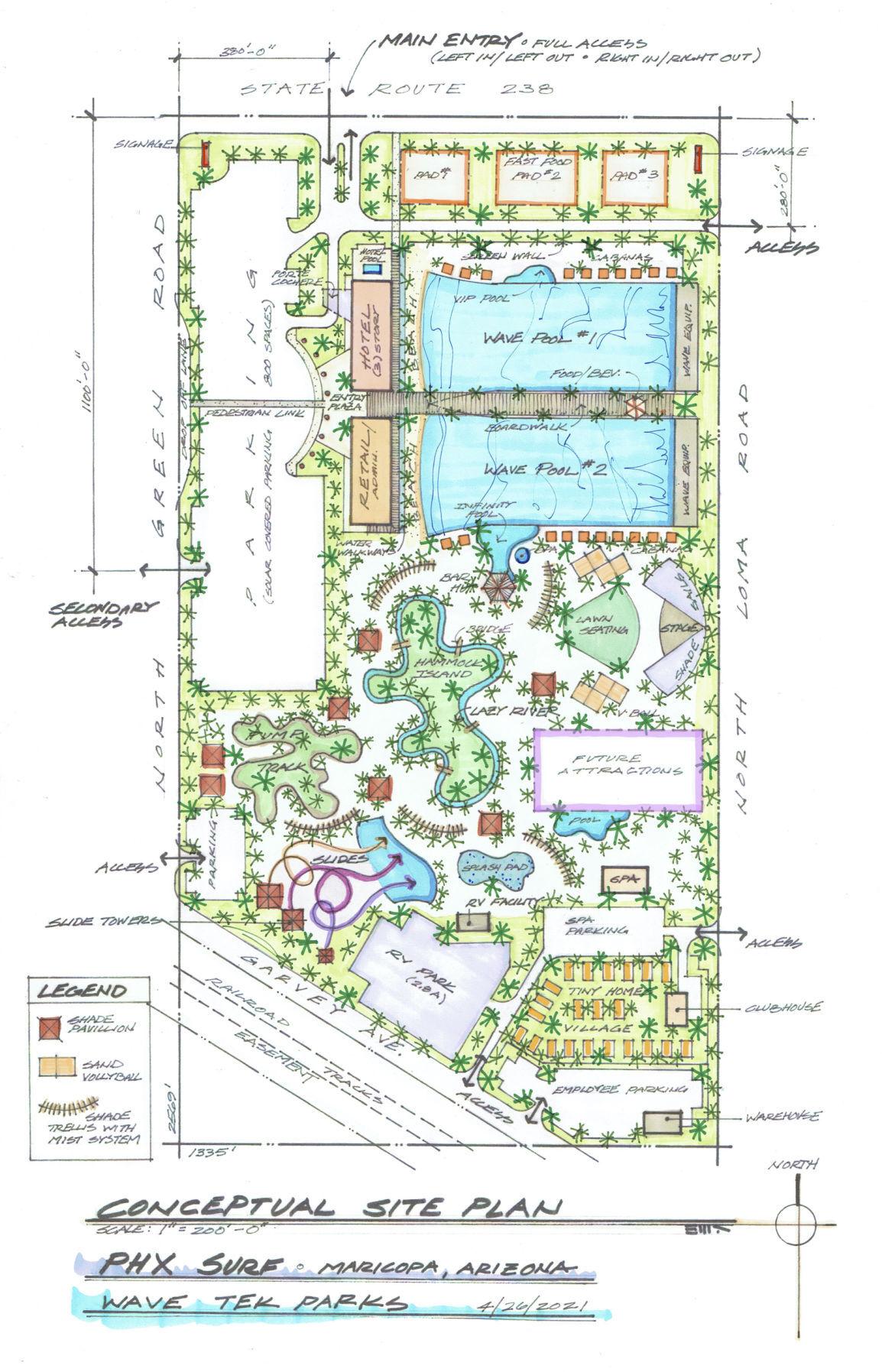 A schematic of what the proposed Maricopa water park could look like.

The Maricopa City Council approved a four-month lease agreement last Tuesday night with PHX Surf, under which the city and the applicant will continue to work on any issues.

“(The approval) is a first step … a very promising first step, but still a first step,” said City Manager Rick Horst. “As with any application, staff will study the issue against all city, county, state and federal guidelines and rules, seek to mitigate any concerns, and ultimately, take our findings to the Planning and Zoning Commission and thus the people for final public vetting.”