A portable air-conditioning unit is hooked up next to a box fan to blow cool air into the living room.

While summer isn’t officially over yet, the National Weather Service in Phoenix is projecting “with 99% certainty” that this will be Phoenix’s hottest summer on record.

“The average temperature for the summer should land at about 96.7 degrees, which would break the previous record of 95.1 degrees set in 2013 and 2015,” NWS Science and Operations Officer Paul Iñiguez said. “We’re also projecting that August 2020 will become the hottest single month on record, with an average of 99.2 degrees, which breaks the record which was set last month.”

According to Iñiguez, the National Weather Service does not have long-term records for the Casa Grande area, but temperatures have been tracking very hot.

Air-conditioning businesses in the area have been swamped with repairs lately.

Those businesses generally recommend that residents not turn off their unit if leaving for a period of time. If leaving for an extended time, it is recommended to turn up the unit 5 to 10 degrees to prevent the house from heating up too much.

Jose Martinez from Desert Sun Heating, Cooling & Refrigeration said the lifespan of an AC unit in Arizona is less than in a cooler climate. According to Martinez, that lifespan in Arizona is somewhere between 12 and 15 years.

According to Martinez, summers are a busy time for repairs, but there has been a noticeable increase this summer.

“Much of that difference can be attributed to the urban heat island influence and more rain-cooled outflow winds from nearby thunderstorms,” Iñiguez said.

The summer is defined as June through August by meteorologists. On Friday, Phoenix hit a record of 50 days of temperatures of 110 degrees or greater for the year.

+2 Wildfire danger to increase across the West this week
By MAURA KELLY Contributing Writer
Updated Sep 1, 2020

PHOENIX — To avoid inhaling wildfire smoke, be sure you’re wearing a mask that will protect you from breathing dangerous smoke and gases into …

The Hidden Fire in the Sierra Ancha Mountains in Gila County had scorched almost 5,000 acres as of Monday.

PHOENIX — To avoid inhaling wildfire smoke, be sure you’re wearing a mask that will protect you from breathing dangerous smoke and gases into your lungs.

As fire crews continue to battle numerous large wildfires across the western third of the United States, no help can be expected from Mother Nature as more dry weather and stifling heat are in the forecast for the region.

A storm system moving through the West the past few days kept temperatures near normal Monday but very little moisture has been associated with this system.

According to the National Weather Service, the low temperature Monday morning at Phoenix Sky Harbor Airport was 78 degrees. That is the second coolest day for August.

The scattered rainfall from the system was hit and miss across Arizona over the weekend. The heaviest rain in Pinal County was in the northern section, with Florence Junction getting .90 of an inch over a 48-hour period, according to the weather service. Florence registered .23 while Maricopa had .20, but Coolidge only measured .02.

Normal high temperatures for the end of August range from the 80s in Portland, Oregon; Boise, Idaho; and Los Angeles to 90 in Sacramento, California, and lower 100s in Las Vegas and Phoenix.

There are three major fires still burning in the Tonto National Forest in central Arizona. The Superstition Fire has burned about 10,000 acres in the Superstition Mountains and was 68% contained as of Monday morning. The Hidden Fire has burned more than 5,000 acres in the Sierra Ancha Mountains. U.S. Highway 60 between Globe and Show Low reopened Monday after being closed for several days due to the Griffen Fire.

All three fires were caused by lightning strikes. 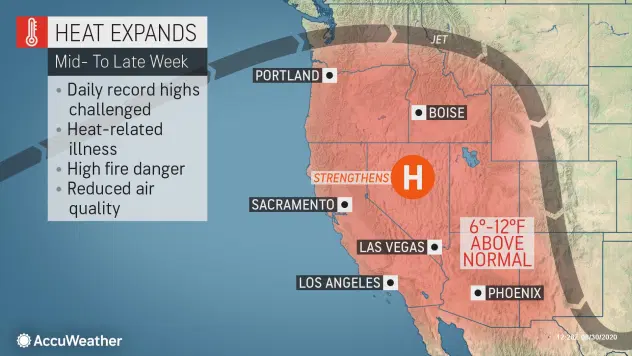 On Monday, the storm system dug far enough south to pull in moisture from what was left of Iselle, currently a non-tropical low in the East Pacific Ocean, but it brought some high clouds to parts of the Southwest.

After this storm sweeps through, an area of high pressure is forecast to build over the region into the middle of the week. As the high settles in at midweek, temperatures are expected to trend higher.

“High temperatures across the region are expected to reach 6-12 degrees above normal for this time of year,” AccuWeather Meteorologist Nicole LoBiondo said. “This will also help to worsen drought conditions that have been building throughout the summer.”

As air stagnates with high pressure over the region, air quality will deteriorate further throughout the week. Dense smoke advisories in parts of the region, including in Tahoe, have been extended through the remainder of the weekend.

A storm system expected to track into the Northwest will act to increase winds, especially across this region. The fire danger with each passing storm will depend on how much precipitation the storm will bring.

Any rain from these storms may be too spotty to offer any relief from the drought conditions or aid fire crews battling the blazes across the region.

Fires have been setting records across the western third of the United States this season. Fires from California to Colorado have grown to some of the largest each state has recorded.

Maura Kelly is a meteorologist for AccuWeather.

A motorcycle officer from Casa Grande Police Department speaks with a motorist who was stopped Friday along Maricopa-Casa Grande Highway. The department is focusing on the roadway after receiving numerous reports of aggressive driving and speeding.

A motorcycle officer from Casa Grande Police Department speaks with a motorist who was stopped along Maricopa-Casa Grande Highway on Friday. The department is focusing on the roadway after receiving numerous reports of aggressive driving and speeding.

CASA GRANDE — The Casa Grande Police Department is becoming increasingly concerned about the amount of accidents, near misses and the number of motorists speeding along the Maricopa-Casa Grande Highway.

The department is using funds from a Strategic Traffic Enforcement Program grant from the Arizona Governor’s Office of Highway Safety to put more resources on the roadway to help educate motorists, reduce accidents and curb speeding and other potentially dangerous activities by motorists, said Sgt. David Engstrom.

“It’s getting too dangerous,” he said.

On a drive out on the highway just before noon on Friday with a PinalCentral reporter, Engstrom pointed out one SUV accelerating at nearly 78 mph out of a series of curves that were rated at 40 mph by a nearby street sign. The vehicle behind the SUV was clocked at 68 mph. Nearly all of the vehicles on the roadway that were picked up by the radar unit in Engstrom’s vehicle were over the posted speed limit of 50 mph.

Highly traveled roads like the Maricopa-Casa Grande Highway always have a number of reports of road rage, speeding or accidents. But Engstrom, who is the supervisor of the department’s Traffic Enforcement Unit, said he decided to take a closer look at traffic on the roadway after he noticed an increase in complaints from citizens. A video from a citizen’s dash board camera in May showed a car being forced off the road by a motorist who was passing another vehicle.

Maricopa-Casa Grande Highway is a bit tricky for law enforcement officers to police, because the roadway runs through at least four jurisdictions: the cities of Casa Grande and Maricopa, Pinal County and the Ak-Chin Indian Community, Engstrom said.

He said he parked his unit out on Casa Grande’s portion of the highway for a few Saturdays and clocked motorists traveling over 70 mph on the roadway. One driver was caught doing 85 mph.

Engstrom said he didn’t pass out tickets but he did try to educate each driver he pulled over about the dangers of speeding and aggressive driving.

“These were drivers from all walks of life and all ages,” he said.

They’re also more likely to change their behavior if they have a good experience with an officer, Engstrom said.

“I prefer to use positive enforcement first,” he said.

When pulled over by an officer, most drivers don’t realize how fast they’re going, Engstrom said. The wide open, rural stretches of roadway that are common in the West and in Pinal County can make some drivers get complacent about how fast they’re driving.

Other motorists are speeding because they’re late for work or an appointment. When you’re late for work, you’re more likely to be in a bad mood and drive more aggressively, Engstrom said.

Speeding is not worth the extra few minutes you might get if you’re late for work, he said. Especially if you get into an accident or get pulled over by a police officer.

Leave a bit early so you’re not in a rush, he suggested.

He also pointed out that Maricopa-Casa Grande Highway is not and was not designed for speeds over 50 mph. It’s an older, narrower, two-lane road with a set of curves in one section and a tricky intersection where West Val Vista Boulevard dead-ends into it. It also has a lot of commercial traffic from industries, such as Abbott Nutrition and Frito-Lay, that line the route.

Engstrom started stationing officers in five-hour blocks of time on the highway using the grant funds from the state in June. In the first 90 days, officers clocked motorists doing an average speed of over 72 mph. One officer pulled over a motorist who was doing 98 mph.

Another officer had 16 stops in a five-hour block of time, he said. Most traffic stops take about 15 minutes, starting from when an officer pulls a vehicle over to when the vehicle merges back into traffic, he said.

The main purpose of the traffic enforcement detail on the highway is to educate drivers and hopefully change their behavior, Engstrom said. The department plans to have traffic officers stationed on the highway for quite some time.

“We want people to think about the other motorists,” he said.

The Arizona Supreme Court has ordered a continuation in its review of a lawsuit filed against the RTA and Pinal County by Harold Vangilder and the Goldwater Institute for the 2017 voter-approved sales tax.

The revenue from the half-cent sales tax is supposed to go toward improving Pinal County roadways, including a north-south freeway connecting U.S. 60 in Apache Junction to Interstate 10 near Eloy, widening State Route 347 north of Maricopa, an east-west corridor connecting Maricopa to Casa Grande, an interchange with I-10 in Casa Grande at Kortsen Road and the widening of Thornton Road.

The sales tax was approved by a narrow voter margin. The Goldwater Institute and other plaintiffs in the case claim the tax is unconstitutional because it creates a variable tax rate on items that cost more than $10,000. According to the wording for the tax, items that cost more than $10,000 are charged the half-cent sales tax on only the first $10,000 of the price tag. The plaintiffs claim this creates a new type of sales tax that has not been authorized by the Arizona Legislature.

The Maricopa County Superior Court’s Tax Court ruled against the county and the RTA two years ago. The case was appealed to the Arizona Court of Appeals Division 1 in Phoenix in 2019. That court overturned the tax court’s decision and the Goldwater Institute appealed that ruling to the Arizona Supreme Court in February.

The RTA has been able to continue to collect the tax while the case has moved through the courts. The money is currently being held in escrow pending a ruling in the case. As of February, the escrow account had about $33.4 million.

The Pinal Partnership organization, along with the cities of Maricopa and Coolidge and the towns of Queen Creek and Florence, have filed amicus curiae, or friend of the court, briefs in support of the tax. The Arizona Tax Research Association and Arizona Free Enterprise Club have filed similar briefs in opposition of the tax.

FLORENCE — In a discussion of transportation needs, the words “state funding” don’t come up often enough, and there’s a good reason for that, …