PHOENIX — A Casa Grande couple reported missing by their daughter was found in her son’s Phoenix apartment earlier this month with the man dead and his wife clinging to life.

George Hogshead and his wife, Sandra H. Knapp, were allegedly killed by Sandra’s son sometime between March 28 and April 2, according to the Phoenix Police Department.

Her son William Knapp, 41, was arrested April 2 after Phoenix and Casa Grande Police found the gruesome scene at his apartment at 304 W. Southern Ave. 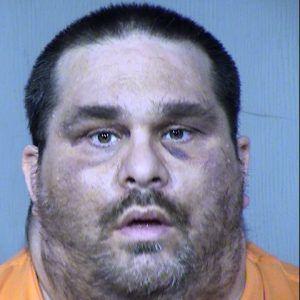 “On April 2, husband and wife George Hogshead and Sandra Knapp were reported missing in Casa Grande by their adult daughter, who lived out of state,” a Phoenix Police probable cause statement reads. “She last talked to her parents on March 28, during which time they informed her they were going to buy groceries for their son William Knapp in Phoenix. She informed police William was agoraphobic, lived alone and had anger management and mental health issues.”

The case was assigned to officers of the Casa Grande Police Department who conducted an emergency trace of Sandra’s phone. The phone was located in Riverside, California, and was turned off.

Phoenix Police attempted to make contact with William Knapp several times at his apartment and did not receive an answer.

Casa Grande Police detectives went to William Knapp’s apartment and “upon approaching the door, smelled an odor of decomposition coming from inside.”

CGPD officers got a key from the manager of the complex and found the body of George Hogshead face down on the living room floor with blood under his body.

“George was in an advanced stage of decomposition,” according to the probable cause statement. “Based on the blood evidence, it is believed George died from an inflicted traumatic injury.”

Sandra Knapp was found face down in the kitchen, which adjoined the living room, and she was alive.

“Sandra had a laceration to the back of her head and was in and out of consciousness,” police reported.

After she was transported to Banner-University Medical Center Phoenix, it was determined that she had suffered multiple rib and facial fractures and was bleeding inside her brain.

Phoenix Police detectives contacted the Riverside, California, police and William Knapp was located at a Roadway Inn on Magnolia Avenue in Riverside.

He was arrested and extradited to Arizona to face charges in Maricopa County for the second-degree murder of George Hogshead and Sandra Knapp.

William Knapp arrived in Maricopa County on April 21 and is being held on $1 million bond.

The couple lived on East Golden Court in Casa Grande.

According to friends, George and Sandy were very active in their Casa Grande community, especially in the area of mental health, as their son had serious issues dating back to at least high school. George was also very proud of his volunteer service with the Pinal County Sheriff’s Office.

William Knapp grew up in Wexford, Pennsylvania, and was at one time a very promising high school football recruit until he got in trouble with the law.

He graduated from North Allegheny High School in Wexford in 1997 and played two years at the University of Rhode Island on a football scholarship but was expelled for violent fights with members of the football team. He then enrolled in Indiana University of Pennsylvania. It was there that he was arrested, tried and sentenced on Nov. 9, 2001, for attempted murder of a police officer.

The Pittsburg Post-Gazette reported on Nov. 9, 2001, that “Knapp, once one of Allegheny County’s most promising high school football prospects, is going into the state prison system for tackling and choking a police officer last year in what Knapp’s lawyer said was a steroid-fueled rage.”

Knapp, 23 at the time, was sentenced to two to four years in prison but allowed 14 months’ credit for pretrial incarceration.

Indiana County Common Pleas Judge Gregory Olson said he came down heavily because Knapp “had a history of violence, a juvenile record and a drug problem — the latter, Ceraso said, a reference to the bodybuilding steroids police found in his car when he was arrested after the midday attack 13 months ago on the Indiana University of Pennsylvania campus,” according to a story in the Post-Gazette.

On Sept. 10, 2000, the Post-Gazette reported William Knapp was charged with flattening an IUP student with a punch to the head during a fraternity party, at which one witness told police he watched Knapp “throw people off the back porch.”

For that, Knapp got two years’ probation.

But two days after the attack, IUP police say, Knapp became enraged when he was stopped for making an improper turn. Police said Knapp threatened IUP Sgt. Gregory Davis, charged him and then — when Davis sprayed Knapp with Mace — knocked him down and tried to choke him.

Knapp avoided trial by pleading guilty to aggravated assault under a deal in which he avoided other charges, including attempted homicide and possessing restricted steroids.

CASA GRANDE — Like other graduating seniors, Nathan Matthews and Rachel Okuagu won’t hear the cheers from their classmates when they make their commencement day addresses on graduation day.

But on Wednesday afternoon, they were greeted with cheers, honking car horns, banners and balloons as the staff and teachers from Vista Grande High School visited their homes and paraded down the streets of their neighborhood.

Matthews is Vista Grande High School’s Class of 2020 valedictorian, and Okuagu is the class salutatorian. Because graduation ceremonies will be held online this year, the school’s top students will deliver their commencement addresses online from home.

Teachers and staff gathered at the school, then paraded in their cars through the students’ neighborhood.

Both Matthews and Okuagu live in the Highland Manor neighborhood.

“We are hoping this will help ease the pain and heartache of not having a live, normal graduation,” Wilhite said.

The procession stopped briefly at each of the two students’ homes to deliver awards, medals and honor cords while still observing social distancing protocols.

“We wanted to include students in the celebration but decided it may be a challenge making sure they all stayed in their cars,” Wilhite said.

Both Matthews and Okuagu are scheduled to speak during the school’s online graduation ceremony.

But Matthews said it won’t be the same as standing before his class on a stage.

He was happy and surprised to receive a visit from the school.

Wednesday’s visit was a surprise to both Matthews and Okuagu, although school officials had made arrangements with their parents.

“I’m so glad they’re doing this for these kids,” said Ana Matthews, Nathan’s mother. “They worked so hard this year, and I know they’re disappointed about not having a normal graduation.”

CASA GRANDE — For this year's graduating seniors, having commencement ceremonies moved online means they won't have a chance to celebrate thei…