More than 200,000 flags were planted in Washington in November to represent the number of people killed by COVID-19 — a number that has since grown to almost 430,000. The nearly 13,000 COVID-19 deaths in Arizona are believed to be the driving force behind a 25% increase in the number of deaths in the state last year.

WASHINGTON — Total deaths in Arizona rose 25% in 2020 over the previous year, with Pinal County seeing an increase of 28% for the year in which COVID-19 became the leading killer in the state.

While data on the causes of death is not expected until later this year, experts attribute the “exceptional increase” in deaths to the COVID-19 as well as to fatalities that may be indirectly caused by the pandemic.

“COVID appears to be the reason,” said David Sklar, a professor at Arizona State University’s College of Health Solutions. “Other problems have also increased, such as opioid-related deaths, and some have decreased, such as pedestrian-related deaths because people were driving less and were out less. But COVID has been a large contributor to our increase.”

Holly Poynter, a spokesperson for the state health department, said while it’s likely “COVID-19 deaths are a factor” in the increase in deaths, state officials will not be able to say for sure until complete data on cause of death is available later this year. 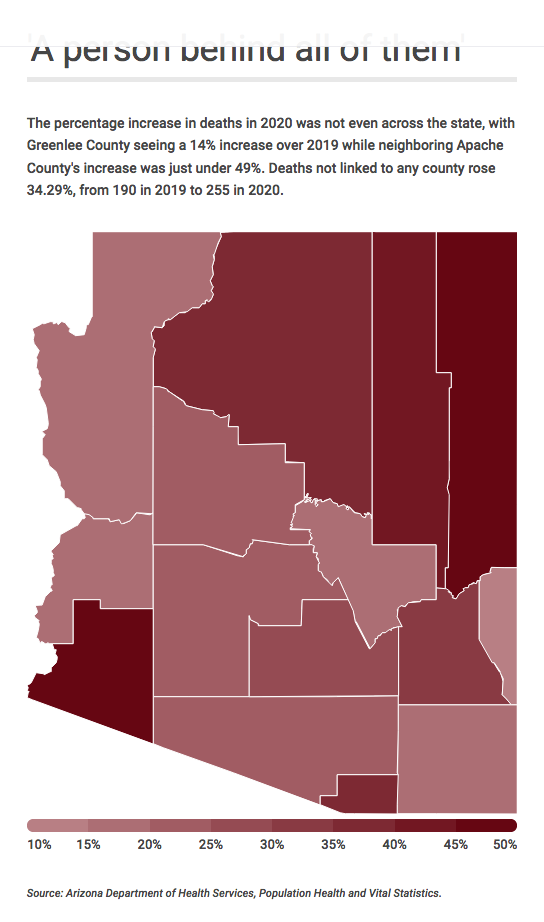 The increased death toll was not spread evenly across the state, with Apache and Yuma counties reporting increases of 48.9% and 48.8%, respectively. On the other end of the spectrum, deaths increased by 14.29% in Greenlee County and 16.2% in Cochise County.

In Apache County, where the total number of deaths rose from 734 in 2019 to 1,093 in 2020, county Health Director Preston Raban said COVID-19 was a driving force, but not the only factor in the increased deaths.

“If you put it down on paper, there was X amount of COVID deaths and then Y amount of regular deaths and so they were a contributing factor,” Raban said. “But there was as many other deaths to really make you raise your eyebrow and say, ‘Wow I wonder … 2020 was an interesting year,’”

Yuma County Communications Director Kevin Tunell was busy helping the county “in full vaccine mode” Wednesday and was not available for an interview. But he did say that “it’s a fair stretch that COVID has had a large part in the number” of increased deaths in the county last year.

The report on the increase in deaths comes as COVID-19 surpassed cancer and heart disease to become the leading cause of death in Arizona last year. And Arizona is not the only state seeing such surges, said Justin Lessler, an associate professor of epidemiology at Johns Hopkins University’s Bloomberg School of Public Health.

Lessler said 25% is “really an exceptional increase” that comes “because we have this new cause of death that … killed in the last year as many people as all but two other causes of death,” Lessler said. “Only heart disease and cancer killed more people than COVID last year and it’s almost up to the level that heart disease would kill in a normal year.”

Lessler echoed others who said COVID-19 was not just a killer itself but may have contributed to other deaths in 2020.

“I could have heart disease and maybe I would have some chance of dying in the next few years,” Lessler said as one example. “It was greater than the people around me, but because I got COVID, and had that heart disease made it more severe. So I die.”

Lessler pointed to the possibility of a “more ancillary effect” from the pandemic, such as the social pressure of lockdowns leading to increases in overdose or suicide deaths, or overburdened hospitals being unable to deliver needed, and possibly life-saving, care to patients. 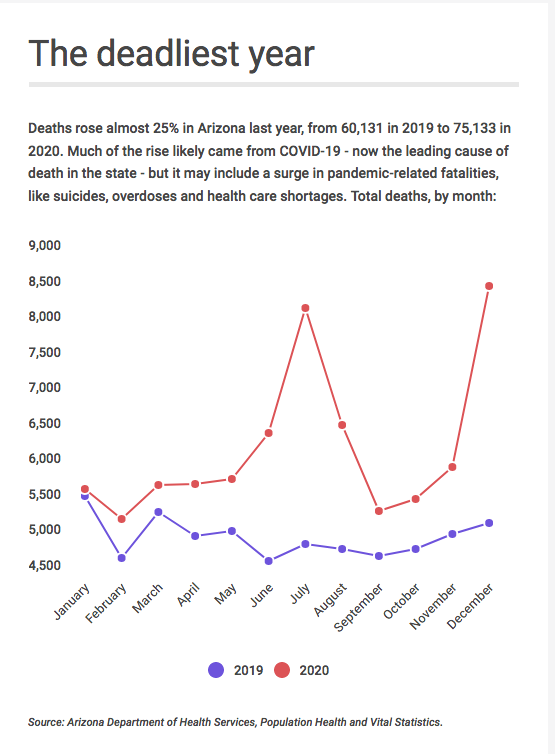 Jeffrey Engel, the Council of State and Territorial Epidemiologists’ senior adviser for the COVID-19 response, said what Arizona saw last year “may be typical,” but that it could have been felt more acutely in the state because of the relatively large number of seniors in the state.

“I think after this is over, this pandemic is over, we as a society will be looking ourselves in the mirror and really try to ask how we take care of our elderly,” Engel said.

For the time being, he said, it’s important that people not get numb to the rising numbers.

“There is a person behind all of them,” he said.

PHOENIX — A second-term Republican lawmaker wants to allow the Arizona Legislature to overturn the results of a presidential election, even after the count was formally certified by the governor and secretary of state — and even after Congress counted the state’s electors.

The proposal of Rep. Shawnna Bolick of Phoenix contains a series of provisions designed to make it easier for those unhappy with elections to go to court. That would include allowing challengers to demand a jury trial and, more to the point, barring a trial judge or an appellate court from throwing out the case, even for lack of evidence, before the jurors get to rule.

That actually would affect the rules of court procedures which are set up and overseen by the Arizona Supreme Court, on which her husband, Clint, serves.

But the most sweeping provision says that, regardless of any other law, the legislature retains ultimate authority in deciding who are the state’s presidential electors. And it spells out that lawmakers, by a simple majority, can revoke the formal certification of the results and substitute their own decision at any time right up to the day a new president is inaugurated.

Bolick is not the first Republican to advance the argument that lawmakers can trump voter decisions.

Only thing is the legislature was not in session and House Speaker Rusty Bowers rebuffed his efforts to call a hearing of the House Federal Relations Committee, which Finchem chaired last year, to look at ways the 2020 election could have been tainted. Bowers said state law is clear that the electors are selected based on the certified voter count.

So Finchem and others decided to conduct their own unofficial, away-from-the-Capitol hearing in late November to hear allegations from Trump’s legal team on how the election was rigged.

That had all the legal authority and effect of a political rally.

Bolick seeks to get around that with her law specifically authorizing a legislative override.

Less clear, though, is exactly how that would work.

It’s not just a question of the fact that Congress actually counts each state’s electoral votes and announces two weeks before Inauguration Day who was elected, her deadline for state lawmakers to make a final decision whether to change the electoral tally. Absent Congress reconvening to recount the tally — something that may not be legal under federal law — there is no way to recount or change the vote.

Potentially more problematic, Bolick’s HB 2720 says that lawmakers can take that action “without regard to whether the legislature is in regular or special session or has held committee or other hearings on the matter.’’

That by itself would appear to violate the Arizona Constitution which spells out when the legislature is, in fact, in session and when it can act.

More practically, Bolick’s proposal does not explain how there even could be a majority vote if there is no formal, on-the-record vote at a non-existent legislative session.

Bolick did not respond to multiple requests to discuss her measure or answer questions. But Secretary of State Katie Hobbs wasted no time in reacting, calling the proposal “breathtaking.’’

“So really, we should just get rid of the presidential election altogether?’’ she said in a Twitter message. “In reality, that’s what this bill would do.’’

Bolick isn’t alone in trying to alter the state’s electoral system in the wake of results which showed that Democrat Joe Biden had outpolled incumbent Republican Donald Trump in Arizona. Other GOP lawmakers have their own ideas.

For example, it would require counties to create digitized images of all ballots which would be available to the public to review.

She also wants the public to be able to monitor what happens when a ballot cannot be read by tallying equipment, perhaps because of stray marks or an individual votes for more than one candidate for an office.

That normally involves election workers from both parties reviewing the ballot and creating a new one attempting to determine the voter’s intent that could be fed through the machine. Bolick wants the images of these duplicated ballots posted on a county website within 24 hours.

And she wants to expand an existing law that now allows for up to three observers representing candidates or political parties at the counting center. HB 2720 would require there also be at least 10 individuals from the general public who are registered voters in the county.

Then there’s the issue of how courts have to handle election challenges.

There were a series of lawsuits following the results showing a Biden victory. That includes one by Kelli Ward who chairs the Arizona Republican Party who contended that there were mistakes made in the process of duplicating ballots.

Ward argued those mistakes denied votes which should have gone to Trump.

A trial judge did agree to have a review of a random sample of 1,626 of these duplicated ballots. And that did turn up errors.

But the Arizona Supreme Court, reviewing that case, said the error rate was no more than 0.55%. And Chief Justice Robert Brutinel said extrapolating that out over the 27,869 ballots that had been duplicated would have gained Trump no more than 153 votes which would not have affected the outcome of the election.

Bolick’s bill would have required the case to go to a jury regardless of merits and precluded the trial judge — and, ultimately the Supreme Court — from concluding ahead of that the case had no legal merit or practical chance to succeed. And the same would apply to challenges to future election returns.

PHOENIX -- The victory of Joe Biden over Donald Trump in Arizona has left many Republican lawmakers grumbling about the results and insisting,…