The largest number of new construction permits this year were for new single-family homes, which clocked in 549 permits. Last year, the city saw a total of 225 single-family home permits pulled by the end of November.

Most of the new houses are being built in subdivisions that have lain dormant since the housing market collapse in 2008.

“About two years ago, there were approximately 6,000 lots located within subdivisions which had been platted but remained vacant or largely vacant,” city Planning and Development Director Paul Tice stated in an email. “Since that time, a significant number of those lots have been purchased by builders who are actively constructing homes on them.” 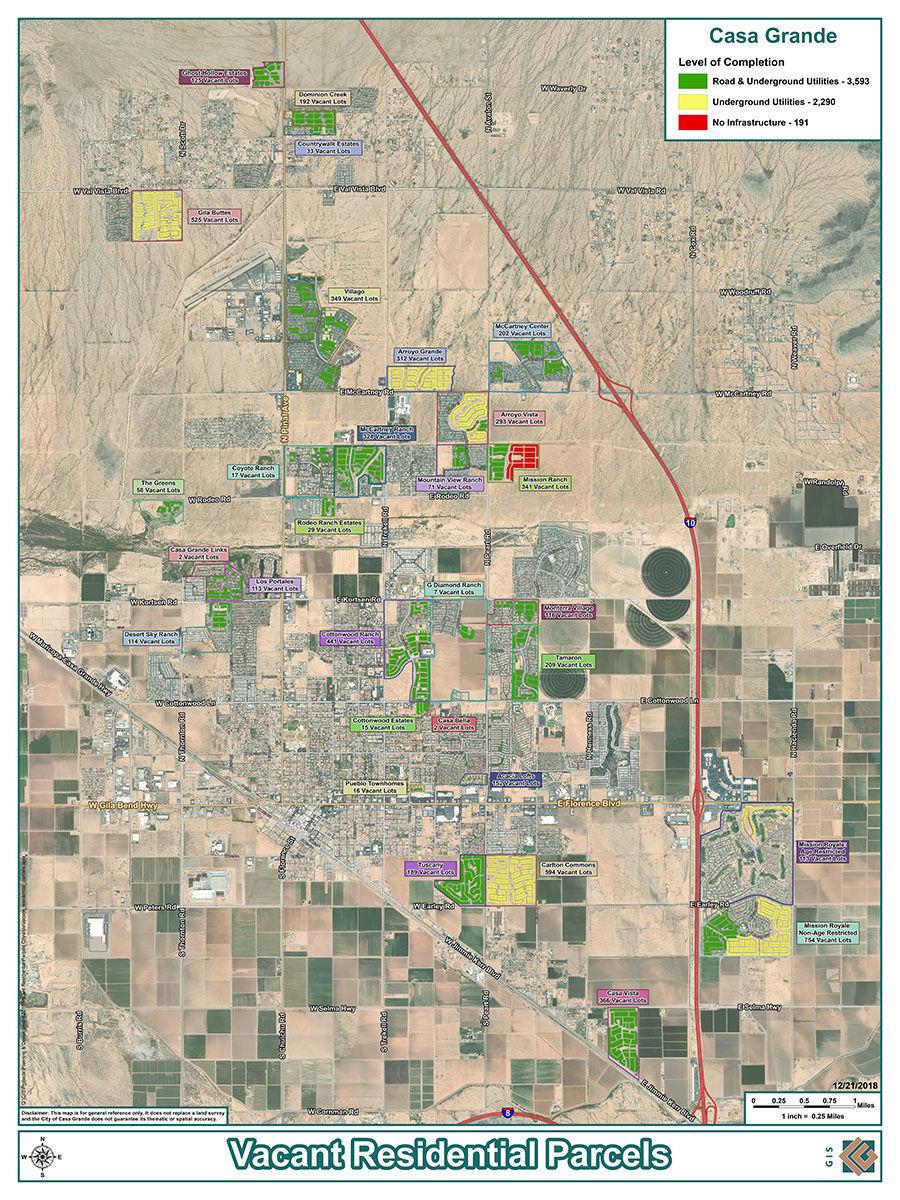 A map of some of the vacant parcels left in various subdivisions within the city.

There are a number of factors that may be driving the increase in new housing permits, Casa Grande Public Information Officer Latonya Jordan-Smith stated in an email. Arizona and Pinal County are prime locations for new business, job seekers and retirees.

“There is also a recent trend of Pinal County residents electing to ‘upgrade’ to new homes in our city (as) more and more East Valley cities are growing closer to ‘full’ build-out, which impacts our local market,” she said.

Amenities such as the city’s new Community Recreation Center and upgrades to Carr McNatt and Dave White parks are also a draw, Jordan-Smith said. The city has also streamlined the permitting process and reduced local development impact fees to attract new construction.

However, builders are being more cautious about how many homes they are building at one time.

“We anticipate that existing developed lots with certificates of assured water supply will continue to be identified first for future home sites,” she said. “We have also experienced a transition to a more ‘phased’ approach to building-out a development. For instance, builders are constructing the infrastructure for 50-100 lots versus the massive 300+ lot developments that Casa Grande witnessed in 2006-2008.”

So developers are building on a smaller scale, he said. In order to accommodate this new approach by builders, the city revised the code requirement for subdivision improvement financial assurances. These assurances pay for the installation of streets and water and sewer lines if a builder files for bankruptcy and can no longer complete the subdivision.

However, the number of new homes being built in the community can be expected to grow.

Tice estimated that there are about 4,000 platted lots out of the total 6,000 lots available that have not been purchased by new builders. He expected that these remaining lots will probably be purchased and have new homes on them in the next six to eight years.

Allyson Siwik of the Gila Conservation Coalition speaks out against proposals that call for diverting a portion of the Gila River during a rally Nov. 10, 2014, outside the Interstate Stream Commission meeting in Albuquerque, N.M.

The river in the Gila Box Canyon in eastern Arizona near the New Mexico border.

FILE - In this Nov. 10, 2014 file photo, a group of activists chants no to diverting the Gila River in southwestern New Mexico during a rally outside the Interstate Stream Commission meeting in Albuquerque, N.M. The U.S. Interior Department has decided not to extend a deadline involving a proposal to divert the Gila River to aid rural communities, a move that cuts off access to more than $50 million in construction funds. (AP Photo/Susan Montoya Bryan,File)

ALBUQUERQUE, N.M. (AP) — The U.S. Interior Department has decided not to extend a deadline involving a proposal to divert the Gila River to aid rural communities, a move that cuts off access to more than $50 million in construction funds.

U.S. Sen. Tom Udall, a New Mexico Democrat, and environmentalists praised the recent decision, saying the river that flows through southwestern New Mexico and into Arizona will be protected.

“We cannot sacrifice the Gila — and the benefits it provides to our tourism and outdoor recreation economy — to this project,” Udall said. “I urge all parties involved to move forward to invest in more cost-effective, high-priority community and agricultural water and restoration projects in southwestern New Mexico.”

The fight over the Gila has raged for years. Under a 2004 settlement, an entity overseeing the project had faced a deadline this month to have an environmental review completed and approved by federal officials in order to free up the additional funding.

Timothy Petty, Interior’s assistant secretary for water and science, stated in a Dec. 20 letter that the “slow pace of progress” reflected a lack of urgency and priority for delivering water to rural communities that could be served by a diversion project.

“Even today, a feasible project with necessary funding and contractual commitments has not been identified to enable project success,” he wrote. “It’s a disappointment this project, that would bring critical water supplies to rural communities in New Mexico, has faced such scrutiny and a lack of support.”

Supporters have argued that the project is vital to supplying communities and irrigation districts in southwestern New Mexico with a new source of water as drought persists. But environmentalists contend the proposed diversion project could amount to a $1 billion boondoggle.

Under the Arizona Water Settlements Act, New Mexico is entitled to 14,000 acre-feet of water a year, or about 4.5 billion gallons. State officials opted to build a diversion system, as that alternative opened the door to more federal funding. The state would have received less funding had it pursued other water projects in the region.

Despite the missed deadline, the New Mexico Central Arizona Project Entity still has more than $60 million it could spend on a diversion and regional water projects.

Allyson Siwik, executive director of the Gila Conservation Coalition, said it’s time to focus on using the money on cost-effective projects that don’t involve diversion. She said her group is looking forward to working with Gov. Michelle Lujan Grisham’s administration to determine the best way to spend the funds.

The Democratic governor is among those opposed to diverting the river. In April, she vetoed more than $1.6 million in funding requested by the Interstate Stream Commission for diversion planning and design. She followed up in September with a letter to the Interior Department, urging that the deadline not be extended.

Betty Martin Chandler, 90, is the oldest living member of the Martin family. She lives near Coolidge.

George Martin, 89, a longtime Casa Grande farmer and teacher who now lives in Scottsdale, is one of the oldest members of the family.

The grave marker for Samuel Martin

The grave marker for Margaret Martin

And because of his research, when more than 40 descendants of the early Arizona settler family met recently for a reunion in Casa Grande, the group was able to celebrate a century of farming and living in the region and honor their family ancestors.

By uncovering homesteading documents, notices of delinquent taxes and several newspaper articles that mentioned his great-grandparents, Martin was able to piece together the story of his family’s history in Arizona. On a warm June day, he found the burial sites of Samuel and Margaret in a cemetery in Mesa. There was no gravestone to mark the burial place.

Although members of the Martin family have gathered for decades for reunions, the 2019 gathering was special. Samuel and Margaret Martin moved to Casa Grande from Bryson, Texas, along with their 11 children in 1919, and the 2019 reunion marked the 100-year anniversary of the family’s arrival in Arizona.

“We decided to do something different to celebrate,” Martin said.

He and his wife Nikki hosted a reunion event for extended family, and relatives visited from across the country.

A cousin, Jim Crouch, created a banner-sized family tree showing all of Samuel and Margaret’s descendants. During the family reunion, all living descendants of the couple who were present posed with the banner.

“This allowed every family member to contribute and feel a part of the anniversary celebration,” Martin said. 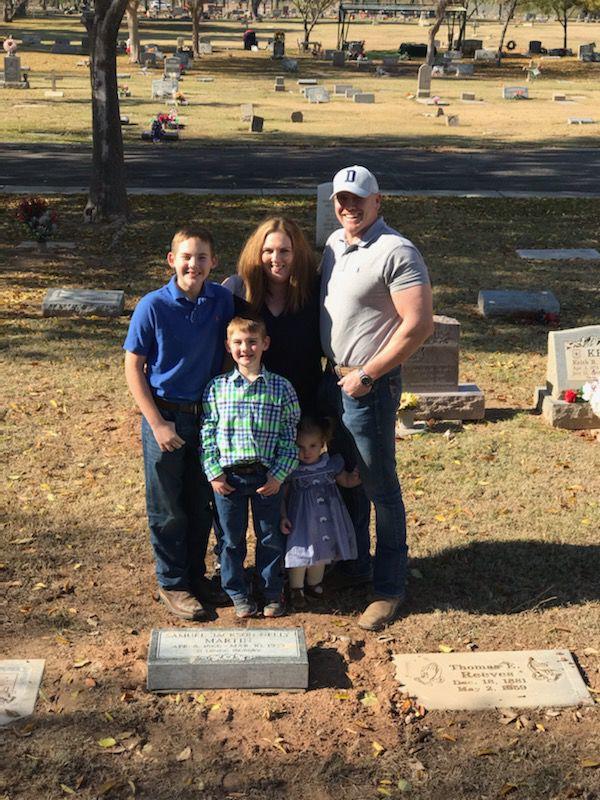 “Everyone was excited to memorialize these individuals who brought the family to Arizona,” he said. “So instead of being long forgotten relatives who no one could recall where they were buried, it provided us with a sense of reality and at the same time, a sense of closure.”

Martin’s research was also a topic of conversation for the descendants. Over the years, he had used various online resources and websites, but he said scouring the Casa Grande Dispatch archives was the best source of information.

“In short notices and occasional references, I discovered my great-grandparents were deeply religious individuals who held church services under the shade of a tree in a city park, and later in their own home,” he said.

He also learned more about the couple’s early Casa Grande days. They had settled near the newly established San Carlos Project because at the time, it was planning an expansion beyond its original boundaries. Samuel and several adult children filed homestead claims in 1920 on about 160 acres that bordered the project.

“As the farm economy grew during the 1920s, the Martins prospered,” Martin said. “They carved farms out of their desert homestead claims. In 1923, they were able to afford a vacation to New Orleans.”

But unable to pay their property taxes when the Great Depression caused a collapse in the cotton market, the family eventually lost their land.

“They never lost their faith and devotion,” Martin said. “In the Dispatch, I found the advertised postings of their homestead claims in the 1920s and their farm being sold for delinquent taxes in the 1930s. There were successes, disappointments, setbacks and outright failures, all of which were chronicled in (the Dispatch).”

After the family lost its farm, some of the couple’s adult children returned to Texas while others moved to other parts of Arizona.

While research led Martin to discover many answers to questions about his family’s past, he said the more he learned, the more he wanted to know.

Through a cousin in Texas, he learned that one early member on the family tree had arrived in the United States about 20 years after the founding of Plymouth Colony (Massachusetts) and was a surveyor who helped establish some of the earliest roads and infrastructure in the colonies. Another ancestor had fought in the Revolutionary War.

The Martin family has only a handful of living relatives who knew Samuel and Margaret. Betty Martin Chandler, 90, who lives near Coolidge, is a granddaughter of the couple and she remembers them fondly.

“Every Sunday my little brother George and I would visit our grandparents’ homestead at the base of the little mountain on the west edge of town (Casa Grande). We loved climbing it. We called it ‘Grandpa and Grandma’s mountain.’ The mountain is still there but now has a water tank sitting on top of it,” she said. 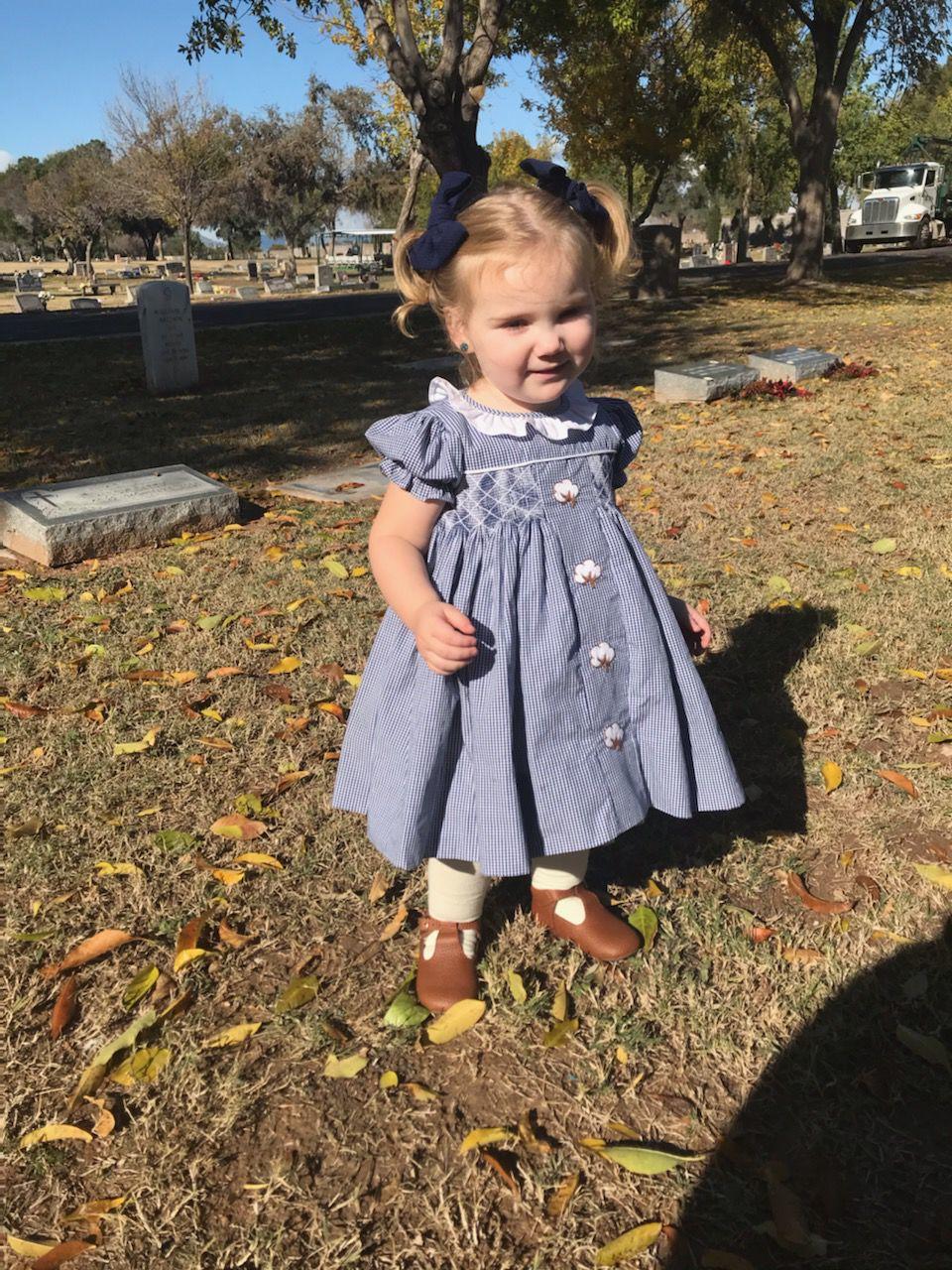 One of the youngest Martins is 1-year-old Kimber, who wore a cotton dress with cotton blooms as buttons to signify her heritage during a recent visit to the gravesite of Samuel and Margaret Martin.

There are currently about 100 direct Martin descendants. About 38 live in Arizona and 20 live in the Casa Grande area. Others live throughout the country.

“Sam and Margaret instilled a deep love of God, country and family into their children,” Martin said. “We have been carrying on those traditions for the past 100 years and still gather as a family each year to give thanks for being a part of something bigger than ourselves.”