Police surrounded an apartment at North Kadota Avenue and East Saguaro Street in Casa Grande after a man reportedly threatened the manager of the complex with a shotgun late Tuesday morning.

Police surrounded an apartment at North Kadota Avenue and East Saguaro Street in Casa Grande after a man reportedly threatened the manager of the complex with a shotgun late Tuesday morning.

CASA GRANDE — An armed standoff in Casa Grande ended peacefully Tuesday when members of the Pinal Regional SWAT team forced entry into an apartment and found the suspect drunk and passed out on a couch.

Police surrounded a unit at Bella Vista Apartments at North Kadota Avenue and East Saguaro Street about 11 a.m. Tuesday after a man reportedly threatened the manager of the complex with a shotgun.

After four hours, SWAT members forced their way into the apartment and reportedly found the suspect, Michael Laughing, 31, drunk and passed out on the couch. 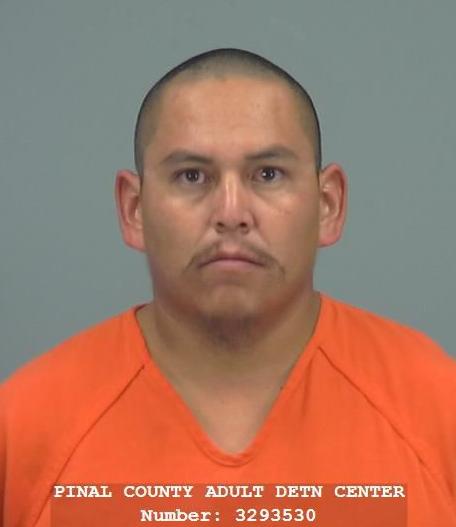 Casa Grande Police spokesman Thomas Anderson said the standoff began when managers were just walking past Laughing’s apartment and he pulled a shotgun on them.

“They were looking at another apartment and just walking by and he opened the door and pointed a shotgun at the manager,” Anderson said. “When we made contact he refused to exit. There just happened to be a large SWAT team in town already. So they arrived and took over the tactical portion of this.”

The scene was turned over to the members of the Pinal Regional SWAT team, who happened to be practicing in Casa Grande when the incident began.

About 1:30 p.m. Tuesday an estimated 50 Casa Grande Police and Pinal County Sheriff’s deputies had surrounded the apartment complex. The SWAT team entered the apartment at 3 p.m.

Casa Grande Elementary School District alerted parents of students who live in the apartment complex that the district would hold their student at their respective school until Casa Grande Police said it was safe to send the students home, said district spokesman Michael Cruz. The students were released following the end of the standoff.

“It was peaceful and done,” Anderson said. “He will be charged with aggravated assault and maybe some other things.”

Laughing has been charged with disorderly conduct with a weapon, possession of drug paraphernalia, misconduct involving weapons, resisting arrest and threats and intimidation.

He remains in the Pinal County Adult Detention Center without bond being set at this time.

CASA GRANDE — An estimated 15,000 people are expected to descend on downtown Casa Grande for the 20th annual Casa Grande Street Fair this weekend.

Some downtown streets will be closed to motor vehicle traffic to accommodate the street fair.

Most vendors will be lined up along both sides of Florence Street and Fourth Street. The fair food court and beer garden will be located on Third Street.

A juried car and bike show is from 10 a.m. to 3 p.m. on Saturday on Second Street and features vehicles from across the region competing for trophies and prizes.

A kids zone on Second Street will offer activities and attractions for children.

This year, a whole section of the street fair, on Fourth Street west of Florence Street, will be dedicated to artists and vendors who focus on vintage goods and items made from reclaimed materials.

Live entertainment will be provided throughout the day on the Main Stage on Fourth Street.

Entertainers on Saturday are:

Taking the stage on Sunday are:

CASA GRANDE — The City Council got an update on the possible creation of a partnership between the city and the Greater Casa Grande Chamber of Commerce to create a marketing organization for the city.

Chamber President Renee Louzon-Benn said the new marketing organization, if it is approved by the city, would include an advisory board made up of representatives from the city, chamber, downtown alliance, local hotels and other private businesses.

“We have a unique opportunity to collaborate,” she said.

The cost to operate the organization would be around $360,000 a year, including $200,000 for a marketing campaign for the city.

The money to pay for the organization would come from an additional 3% hotel tax, she said. The city’s bed tax is currently 2%, paid by people who stay in the city’s hotels. The money from the bed tax currently goes to support youth services, such as the Boys & Girls Clubs of the Casa Grande Valley. Two percent of the increased bed tax would still go to youth services, she said. And some of the cost could be covered by a $50,000 grant from the state’s tourism commission.

Louzon-Benn said her organization has already reached out to local hotel owners and all but one have signed onto the project. The one remaining hotel is going through internal restructuring and wanted to wait until that process has ended before making a decision, she said.

If the city can get a marketing organization like this rolling, it could not only draw new residents and businesses to move into town but also make the city more attractive to tourists who are looking for places to visit.

Councilman Matt Herman pointed out that the city’s residents are also a good means of advertising the city’s charms to other people. When people like where they live, they’re more likely to talk about it to others, he said. If the city can advertise its services, events and attractions more to its own residents, they will spread the word to all of their friends who will come and visit and talk about the city with their friends, he said.

Louzon-Benn said one idea that’s already been discussed is an “I love my city” marketing campaign that would encourage residents to use social media to advertise their favorite parts of the city.

Councilwoman Donna McBride asked how the organization would get local businesses involved and keep them informed of how well the marketing campaign was doing.

Louzon-Benn said the information would be spread through the chamber’s business newsletter and on social media.

Because the topic was a discussion item, no action was taken by the council. However, City Manager Larry Rains said staff will bring language for the tax increase advertisement to the council sometime in the next few weeks.

The council also approved a $131,024 contract with Audio Visual Innovations for new audio and video equipment for the council chambers. The city had budgeted around $150,000 for the upgrades.

CASA GRANDE — Kids may have more new playground equipment to play on. The Casa Grande City Council is expected to approve nearly $60,000 for t…

CASA GRANDE — Food trucks and other mobile food vendors have until January to come into compliance with the city’s new vendor fire codes.