“I’m going to continue what Supervisor (Anthony) Smith had and that’s the Sessions with the Supervisor, so I’m going to do at least one a quarter,” he said. “If you contact me with issues that you have, we can address those at that time.”

McClure added that street repairs will continue in the area. When he was campaigning he sent out surveys, and a majority of the responses included local health care, local employment and a sense of community.

The construction of a new Desert Senita health care facility is underway near the newly built Family Dollar store, so McClure can check local health care off the list of what the Arizona City community wants.

During the luncheon he admitted that he does not know what he can do to bring local employment to the area but he does have some ideas so that there’s a sense of community.

Arizona City has a library but it’s not very big. McClure pointed out that other libraries have a separate room to hold meetings or different types of after-school and summer programs for kids.

McClure added that the space could be set up with TVs and kids could come play video games.

Besides wanting to continue the Sessions with the Supervisor and the road repair program in Arizona City, McClure didn’t have real concrete plans after having been elected a few weeks ago.

McClure told the luncheon attendees that he’s working on getting an administrative staff.

Arizona City Chamber Treasurer Nancy Hawkins asked McClure about the RV parking limitation that was previously a topic of discussion at one of Smith’s supervisor sessions.

McClure said Smith did not find any support for that issue. 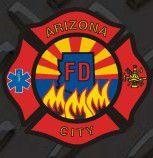 Reelected board members Randy Wittenburg, Dewayne Hill and Dean Craun as well as newly elected member Randy Johnson are hoping to get the training out of the way but due to COIVD-19, that is highly in question.

“The January conference in Laughlin has been canceled and it does appear that we will have a Glendale conference but I wouldn’t count on that for sure at this time. With the additional cases of the last two weeks, I can see in the foreseeable future that we’re probably not going to have that conference either. It wouldn’t surprise me if these classes get canceled as well, there’s some up north and in the Tucson area and the Phoenix area as well.”

Heaton added that if the cases continue to rise, those classes will likely be canceled even though there is social distancing.

The district is still working on more grants and Heaton confirmed that the district recently received three grants.

“We’re currently only being funded by the state side of FEMA (Federal Emergency Management Agency) so that approximately $142,000 is only afforded through that grant and roughly the same amount is also available from the federal side,” Heaton said. “As we all know, the federal side moves slower, but it is exciting to get specifically for our extra expenses from COVID another $142,000 to the budget.”

Heaton added that the federal government could provide an additional $292,000 from the CARES Act.

“Through the CARES Act we’re able to recoup those costs for not only time but equipment and the associated cost from that,” Heaton said.

ARIZONA CITY — The Arizona City Fire District board swore in its newest member on Sept. 14 as Randy Johnson was selected to fill the vacant se…

ARIZONA CITY — The Arizona City Fire District has established many different programs and events to assist the community.

+4 AZCFD grateful for all the support during Water Days
Staff Reports
Updated Nov 18, 2020