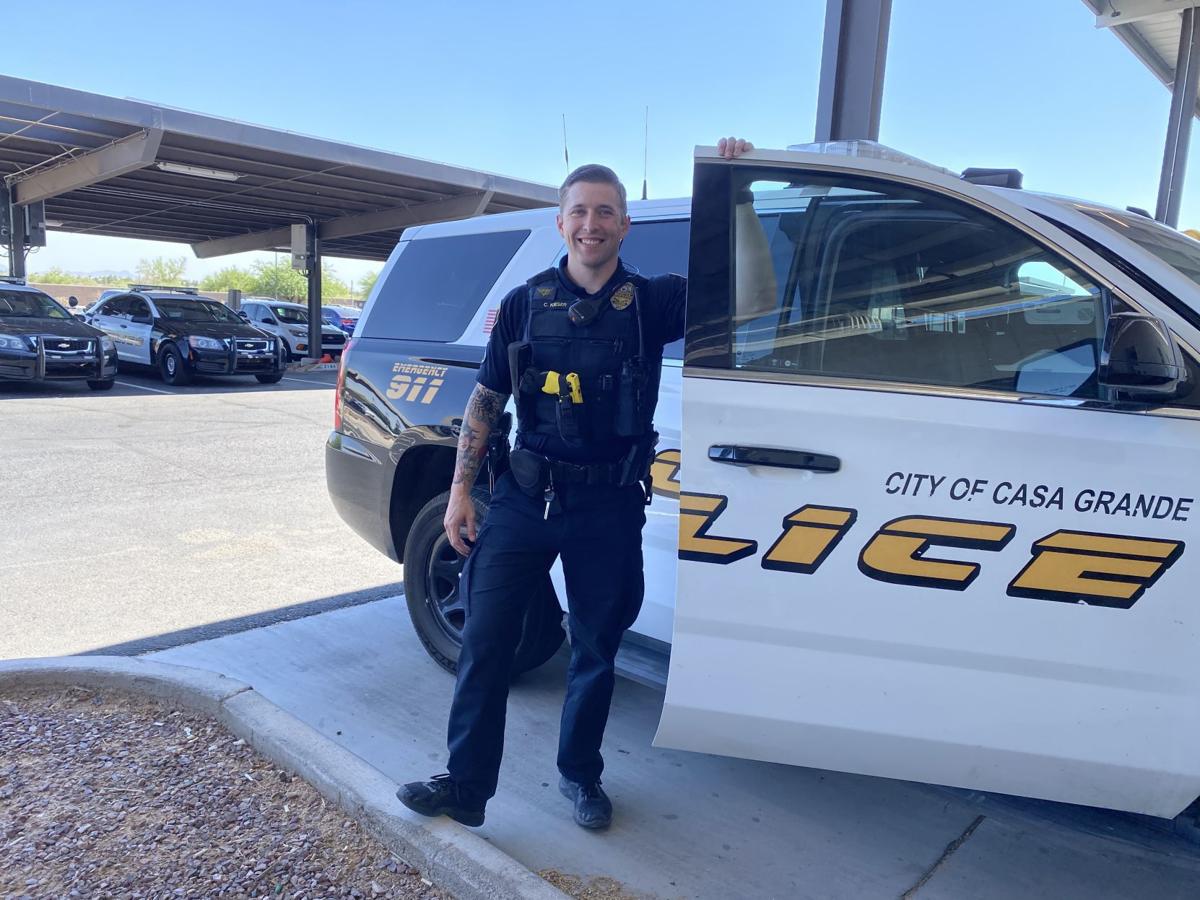 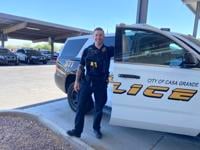 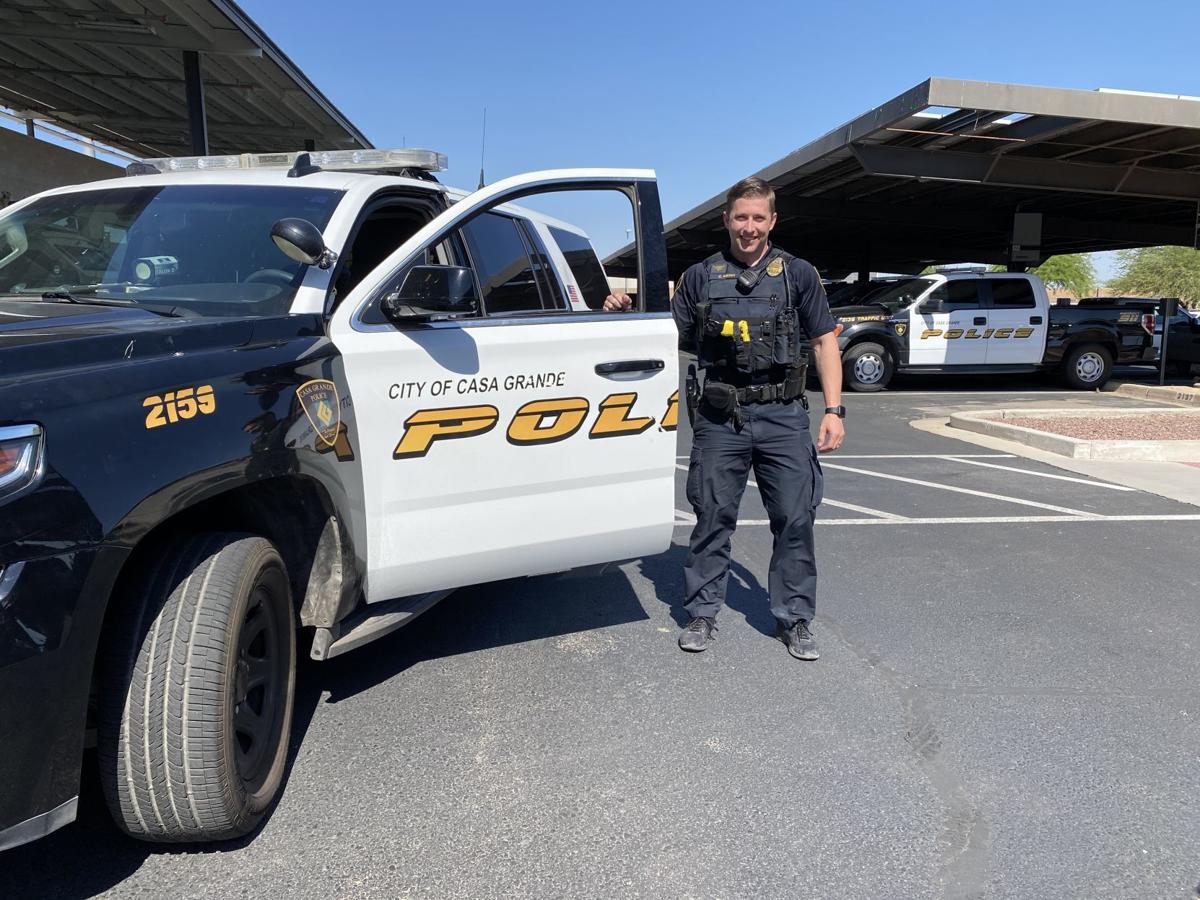 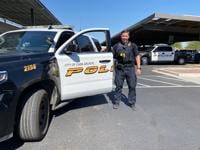 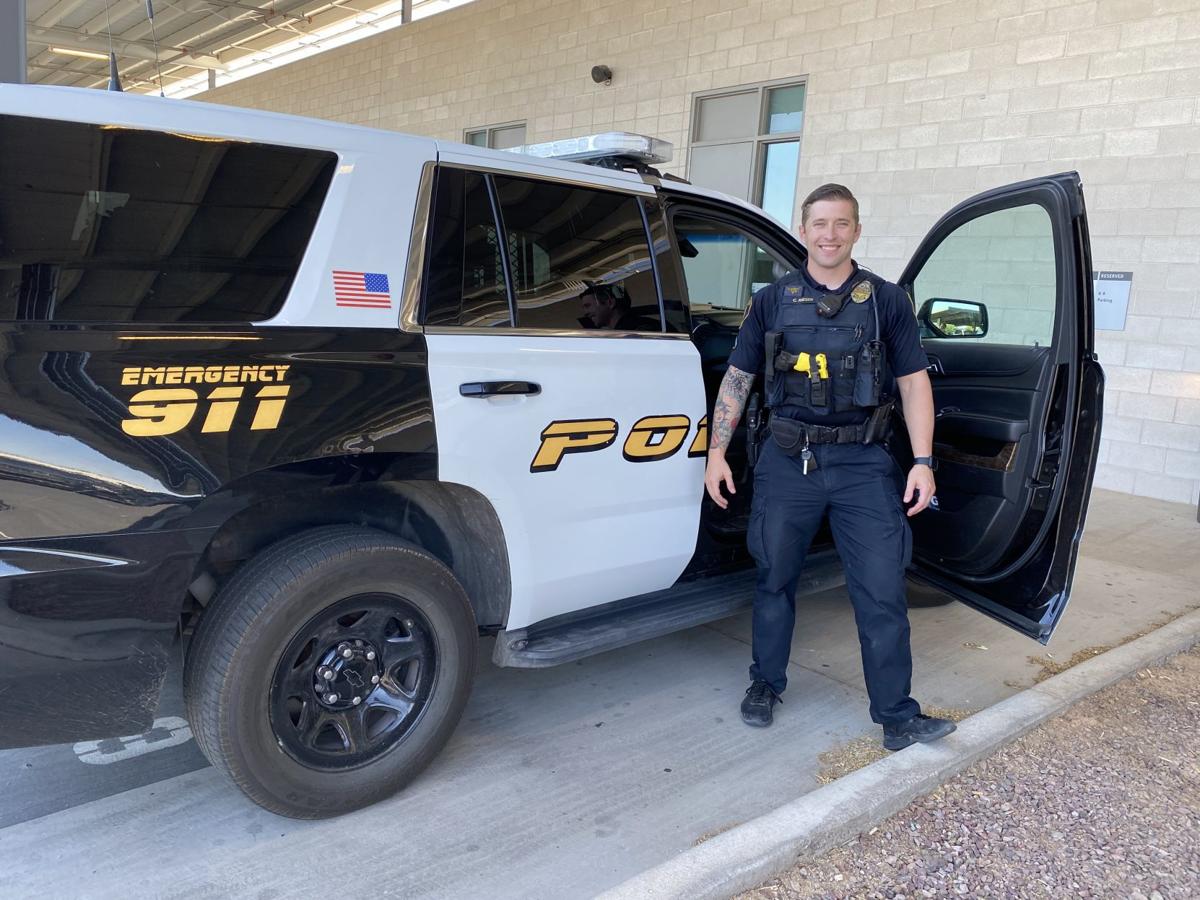 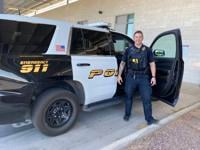 CASA GRANDE — To keep his family safe from the coronavirus, Casa Grande Police Department Officer Curtis Kieser has a checklist of things he does when he arrives home after a typical workday.

Before he enters his house, he removes his shoes, then he proceeds inside via the garage. He immediately places his uniform in the laundry, then heads straight for the shower, being careful not to bring any items into the house that might be contaminated with the virus.

“I can’t even sit on the sofa or pick up my two-year-old before I get in the shower,” said Kieser, who has worked for the agency for six years.

His wife keeps the checklist posted in the garage for him so he doesn’t forget the safety steps he must take.

As a police officer, Kieser is one of the community’s essential workers who have gone to work every day throughout the coronavirus pandemic, while others practice social distancing.

He said he doesn’t mind the time it takes to go through the checklist at the end of each day as it helps to keep those he loves safe and healthy.

“My biggest concern is that I’ll bring the virus home and pass it to my two-year-old or my grandparents,” Kieser said. “I’m not personally worried about getting sick, but I don’t want to get anyone else sick.”

He also takes extra safety precautions at work to keep the community safe from COVID-19.

“It’s been a crazy time, these last few months,” he said. “The job is the same, although it’s slowed down, but now, we have a different approach to doing things.”

Due to COVID-19, all officers with CGPD are minimizing contact with people and approaching incidents including traffic stops, warrant enforcement and other incidents in ways that aim to prevent the spread of disease.

But even during a pandemic, law enforcement is a high-contact career, said Officer Thomas Anderson, spokesman for CGPD.

“Officers are going to come into contact with people and through that, they’re going to be exposed to viruses as well as other dangers. Safety is always at the forefront of their mind,” Anderson said.

While officers with the department have always paid close attention to safety and cleanliness, concerns of the coronavirus have prompted them to ramp up cleaning.

“We’re used to dealing with things like sweat and saliva, but in the past few months, they’ve paid more attention to cleaning things like radios and other equipment,” Anderson said.

Vehicles are sanitized between passengers, including the seats, steering wheels and floors, to provide a barrier of defense against germs for officers as well as those who are arrested, he said.

“If a suspect is in the back of the car and sneezes, that can cause the virus to settle anywhere in the car or on the back of a uniform,” Anderson said. “So constantly cleaning is important.”

Kieser said normal, everyday policing has changed in small ways to decrease risk of exposure to the virus.

Kieser is the department’s field training officer, a position in which he is part of a team that teaches new hires the ins-and-outs of working at CGPD.

“COVID-19 has made field officer training a little more difficult. I have to show trainees how we do things normally and how we’re doing them now, because of COVID-19,” he said. “We’re still responding to calls, we’re still pulling over drivers and enforcing the law, but there’s differences in how we approach these things now for safety reasons.”

He became a police officer with CGPD about six years ago. Last year, he was credited with saving a Casa Grande man’s life.

“The man was stuck in an armchair. He’d had a heart attack and had stopped breathing,” Anderson said. “Curtis got him out of the chair, started compressions and brought him back to life.”

Kieser said he was inspired to become a police officer after watching the television show “Cops” as a teenager.

“I was never one to stay inside,” Kieser said. “I considered teaching but it wasn’t for me. I decided to become a police officer because I wanted to help people in my community. And I feel like I’m doing that.”

The Casa Grande Police Department has not had any positive COVID-19 cases among its employees, Anderson said.

CASA GRANDE — For pharmacist Jose Cortez, the safety of the staff and patients at Casa Grande Pharmacy has been a top priority throughout the …

COOLIDGE — Watching her arrange the shelves down an aisle that is home to products like allergy relief medicine, nasal spray and pain reliever…