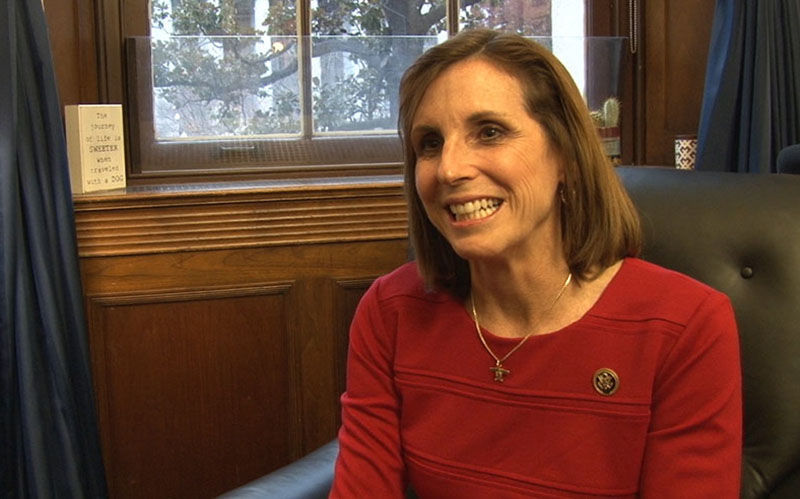 McSally touted provisions in the latest coronavirus relief bill that passed Congress last week. Those provisions include $1,200 cash for individuals, $2,400 in cash to couples and $500 per child for families that will be directly deposited into people’s bank accounts.

“We’re in an unprecedented situation where we’re asking people not to work,” she said. “We had a strong economy but we’re asking people to stay home in order to save lives. So this element of the bill is just trying to help people get through this unprecedented pandemic, where they can provide for basic rent, mortgage, food and other basics that they need to get through this very difficult time.”

McSally said the U.S. Treasury will be using bank information from residents’ income tax returns to make the deposits into bank accounts. The department is also working on setting up a web portal so people who have not filed a tax return in several years can enter their bank information and avoid having to wait several weeks for a check from the government.

There is also relief for small businesses in the bill, she said. The Paycheck Protection Program is designed to give small businesses, the self-employed or independent contractors a chance to get a forgivable loan from their financial institution to cover businesses expenses. The loans are forgivable as long as they are used to help cover the cost of payroll, rent, mortgage and utilities.

The Treasury Department is working with banks and lenders on the guidelines for the program but loans could be available to small businesses as soon as Friday, she said.

“(We) really hope that we will see those who were laid off or furloughed brought back on the payroll and allow the small businesses to kind of hibernate and hang on and get through this together and then when we get back to whatever is normal they can turn the switch and be back in business much more quickly,” she said.

It also provides employees with a steady paycheck, which is better than applying for and then waiting for unemployment benefits to kick in, McSally said.

The bill also has funding for more medical equipment and more funding for research into treatments and a vaccine.

One problem is that even though there is now more money for medical equipment and supplies like tests, masks, gowns and other items, there aren’t enough of those items to purchase, she said.

However, companies across the nation and in Arizona, like Honeywell, are retooling to make the items, McSally said.

“It’s an all hands on deck approach here,” she said.

At the same time, work on a vaccine is progressing rapidly, she said. There are at least 12 different vaccine efforts taking place at the same time and the first phase of vaccine testing is taking place. However, it will still take between a year and 18 months to get a vaccine available. That could help combat a second wave of the virus, if this coronavirus turns out to be seasonal like the flu.

Work on treatments to help people who are already sick are in the works as well, McSally said. Scientists are testing current drugs and looking for new drugs to help treat the disease.

The medical community is also working on a process to test for antibodies for the virus, McSally said. An antibody test could determine who has had the virus and recovered and who may have the virus but is not showing symptoms of COVID-19.

This could make it easier to control the spread of the disease through people who are asymptomatic and allow people who have recovered and may have an immunity to the disease to care for others who are at risk of catching it, she said.

McSally does not expect to see a nationwide federal stay-at-home order from the president. The guidelines that President Donald Trump and the states have put out are important to follow, but spread of the virus is progressing at different rates in different communities around the country.

“We’re a big country and a big state. So what’s happening in New York City is not necessarily what’s happening in Cochise County, Arizona, as far as the rates of infection and what’s happening in the community with potential community spread,” she said. “So it is really important, from my view, to have some broad federal guidance and federal understanding, but then things will be managed at the state and county and city level as we move through this.”

McSally also pointed out that the U.S. is not like China and a lockdown like the one that China imposed would probably not fly in the U.S.

Residents also should not expect to see a lot of medical help from the military, she said. The Navy has sent two of its hospital ships to New York City and California to provide relief but the military’s staff of medical officers is not as great as some people think.

Those officers also have to take care of military personnel and make sure that the military can meet its mission of protecting the country, she said.

However, McSally said she had been in contact with Arizona military bases and the Defense Department to see if there is some capacity to provide aid to communities.

CASA GRANDE — Health care, education and water are just a few of the issues Eloy resident Sharon Girard wants to tackle if she’s elected to th…