FLORENCE — Residents in unincorporated Pinal County will be "highly encouraged" to wear face coverings in public to slow the spread of COVID-19 in a resolution pending before the Pinal County Board of Supervisors.

A majority of the board opted not to “require” face masks, or impose the resolution on the county’s cities and towns. 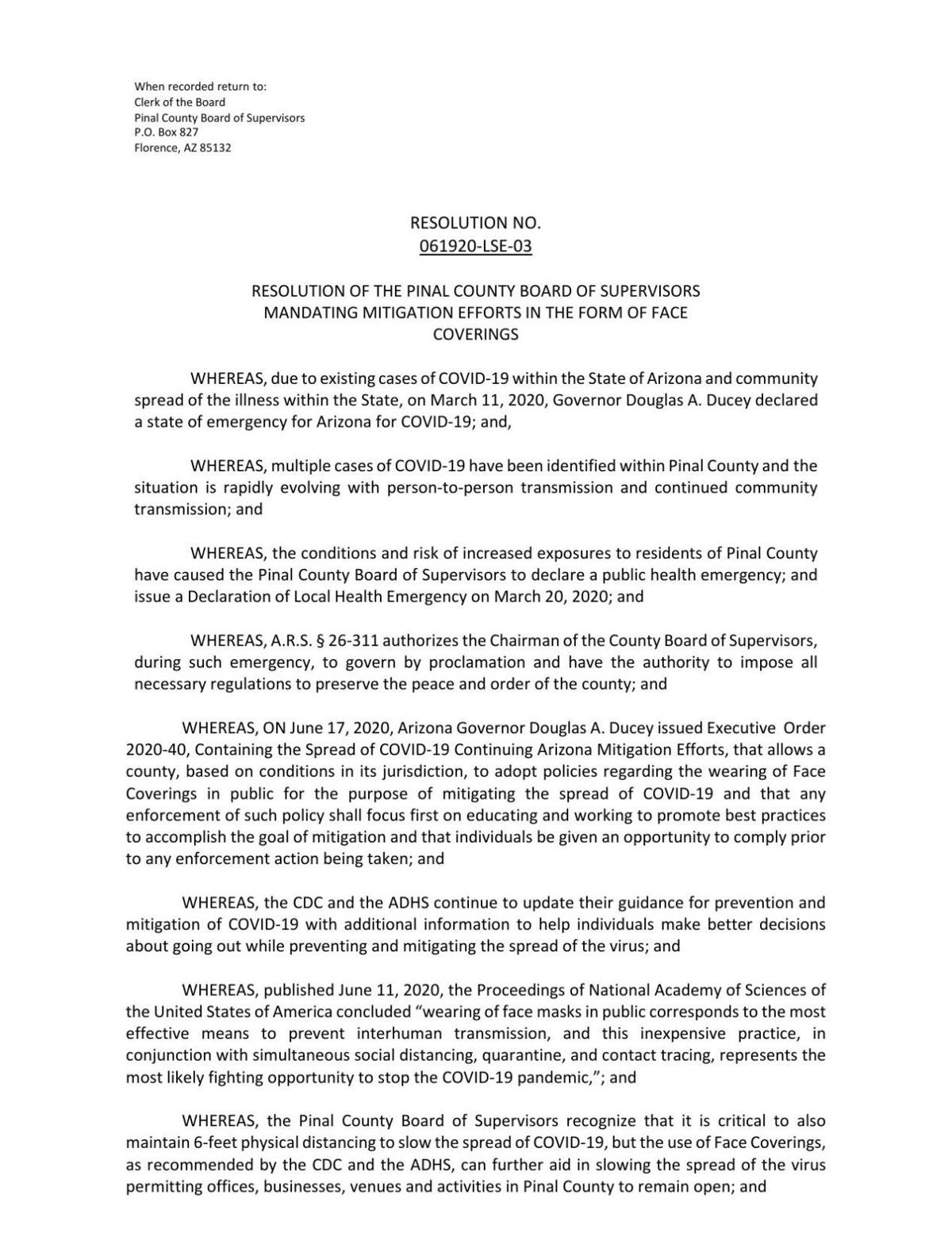 The board met in special session Friday to consider a resolution, but ultimately tabled it until their June 24 meeting. Supervisor Steve Miller, R-Casa Grande, attended the meeting by phone, and due to technical difficulties, was unable to read the final version of the resolution Friday afternoon.

“I need some time to look at it,” Miller said. Also attending by phone was Supervisor Mike Goodman, R-San Tan Valley, who was awaiting the results of a COVID-19 test.

The resolution could be in effect for two years until a great majority of Pinal County has immunity to the coronavirus, either from antibodies from fighting it off or with a vaccine.

Supervisor Pete Rios, D-Dudleyville – the only supervisor who advocated for “requiring” masks -- said under the circumstances there was no urgency in passing the resolution Friday. He said the county has been encouraging social distancing and wearing masks for the last 2 ½ months, “and it’s not working. So the urgency is gone for me, since we’re not requiring it.”

The board has the authority to require masks throughout Pinal County if it wished to. Deputy County Attorney Chris Keller told the board, “when it comes to public health declared emergencies, you have the authority countywide for public health and safety in those situations. In other situations you do not. But once you declare a public health emergency for the county, you do have certain powers that go with that.”

Supervisor Todd-House, R-Apache Junction, said this would put the county at odds with cities such as Apache Junction who have already opted not to require masks. Goodman said the town of Queen Creek is also not mandating masks, although “they’re strongly encouraging it.”

Rios responded he didn’t disagree, “but at the end of the day, we have a lot of individual folk out there who don’t give a hootenanny. They may have COVID-19, they’re asymptomatic, and they’re out there spreading this. … And if they’re not doing their due diligence to protect the rest of society, that is my concern.” He said cases are increasing statewide.

He continued if 84% of the county’s intensive care beds are filled now, and the disease continues to spread, “we are going to wind up in a situation where we don’t have enough beds.”

Goodman said he and family members were tested Friday and hadn’t heard the results, but “we’ve been feeling great, we’ve been feeling good.” He said he appreciates those who’ve offered prayers for him and for Sheriff Mark Lamb, who has tested positive.

But Goodman continued that government shouldn’t “get in the way of personal responsibility. When we start to do that, we take away the liberties, we take away people’s rights. I’m not in the habit of doing that, nor will I ever be.” He said people already “have the responsibility of being good citizens.” Goodman also thanked Rios for wearing a mask Friday.

The resolution recommends that children under age 2 not wear a face covering. Miller said he has seen people trying to put masks on children, “and I don’t see that being very effective.”

Miller asked how long the resolution would be in effect. Dr. Shauna McIsaac, Pinal County public health director, said the emergency can end when there’s 60% to 70% immunity in the community. This can be achieved when people have antibodies from having had the infection, or the availability of an effective vaccine, hopefully in about 18 months.

“So somewhere between 18 and 24 months of an effective vaccine being developed and then distributed, and achieving 60% to 70% immunity in our community, would be the goal,” McIsaac said.

“Absolutely,” McIsaac replied. She added there is currently a lack of effective tests for the antibodies and there are a lot of errors. She told the board that health officials strongly encourage washing a cloth mask every evening and letting it dry.

Miller said he doubted people would continue wearing masks for the next two years.

At the suggestion of Board Chairman Anthony Smith, R-Maricopa, the resolution adopts the requirements for businesses issued in conjunction with Gov. Doug Ducey’s executive order on June 17.

The resolution specifies that “face covering” means a covering made of cloth, fabric or other soft or permeable material, without holes, that covers the nose and mouth and surrounding areas of the lower face, or a full plastic face shield.

All members of the public are “highly encouraged” to wear a face covering inside or outside a facility as they seek or receive Pinal County government services. Masks are also encouraged when people are boarding and riding public transportation or paratransit or are in a taxi, private car service, or ride-sharing vehicle.

COOLIDGE — With the hopes of stemming the spread of the coronavirus, the city of Coolidge is requiring individuals to wear face masks in publi…

FLORENCE — Despite receiving comments in favor of face masks that outnumbered opponents more than 3-to-1, the Pinal County Board of Supervisor…