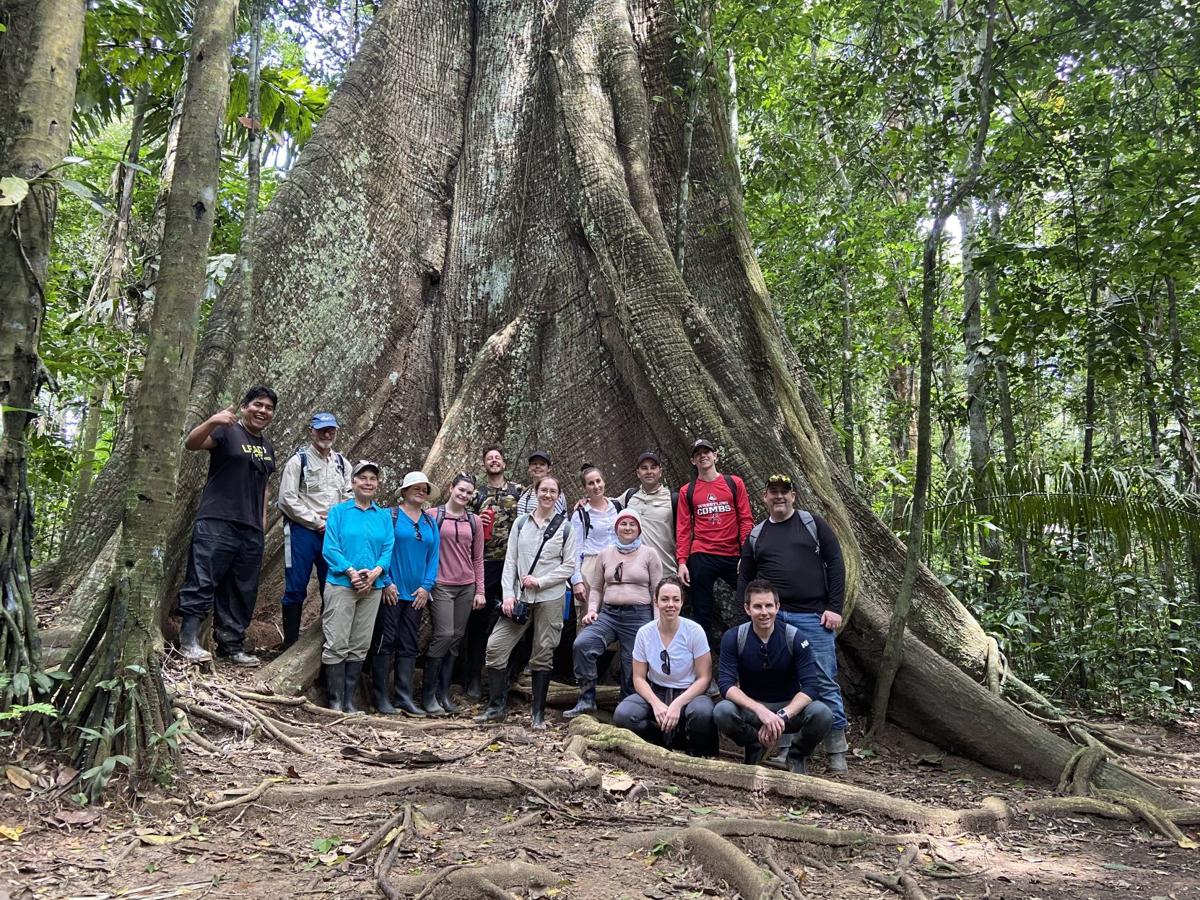 Shawn McDougal, back row in red shirt, explores the Amazon rainforest with his tour group. 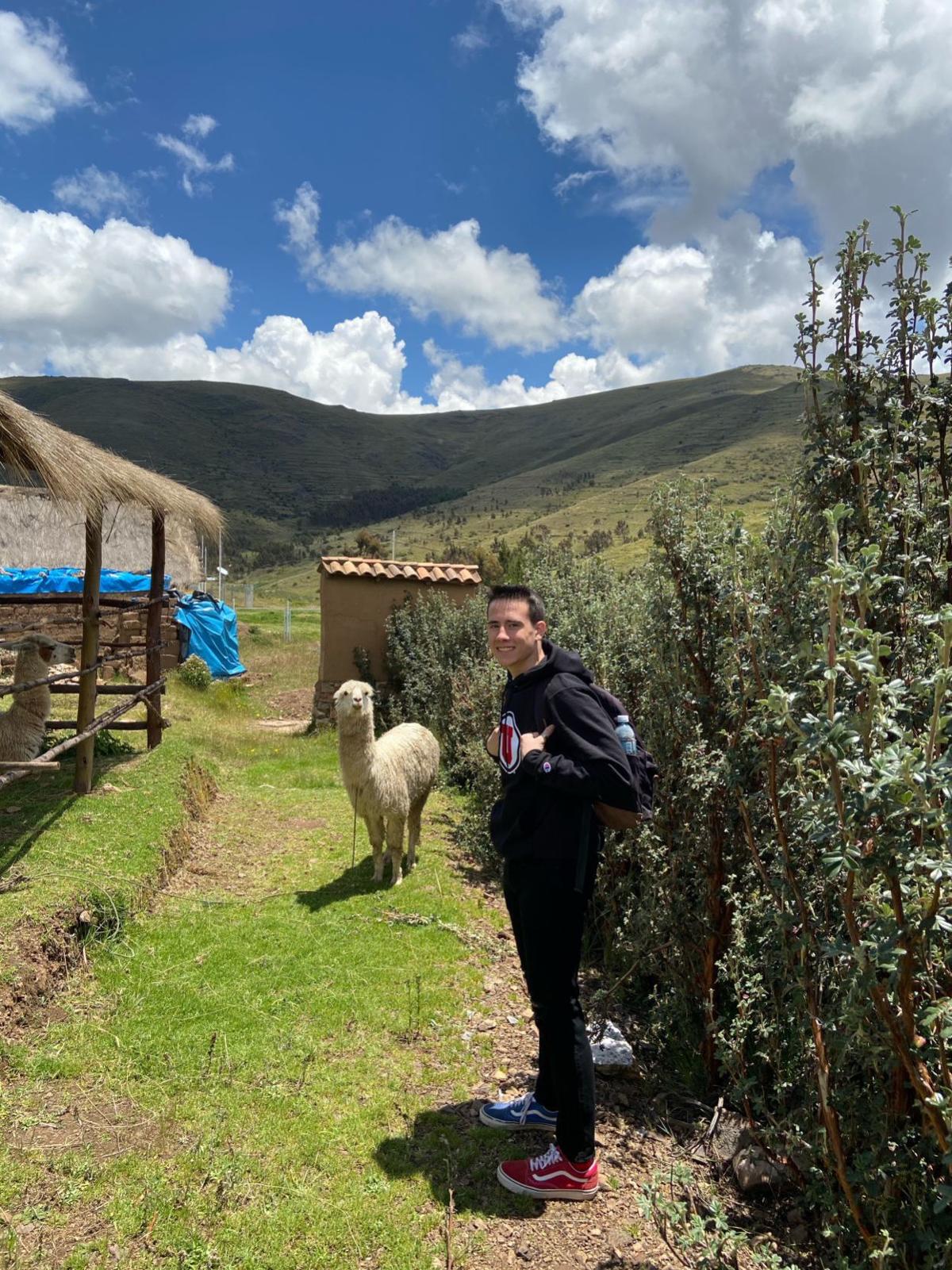 Shawn McDougal poses next to an alpaca at a potato farm in Peru. 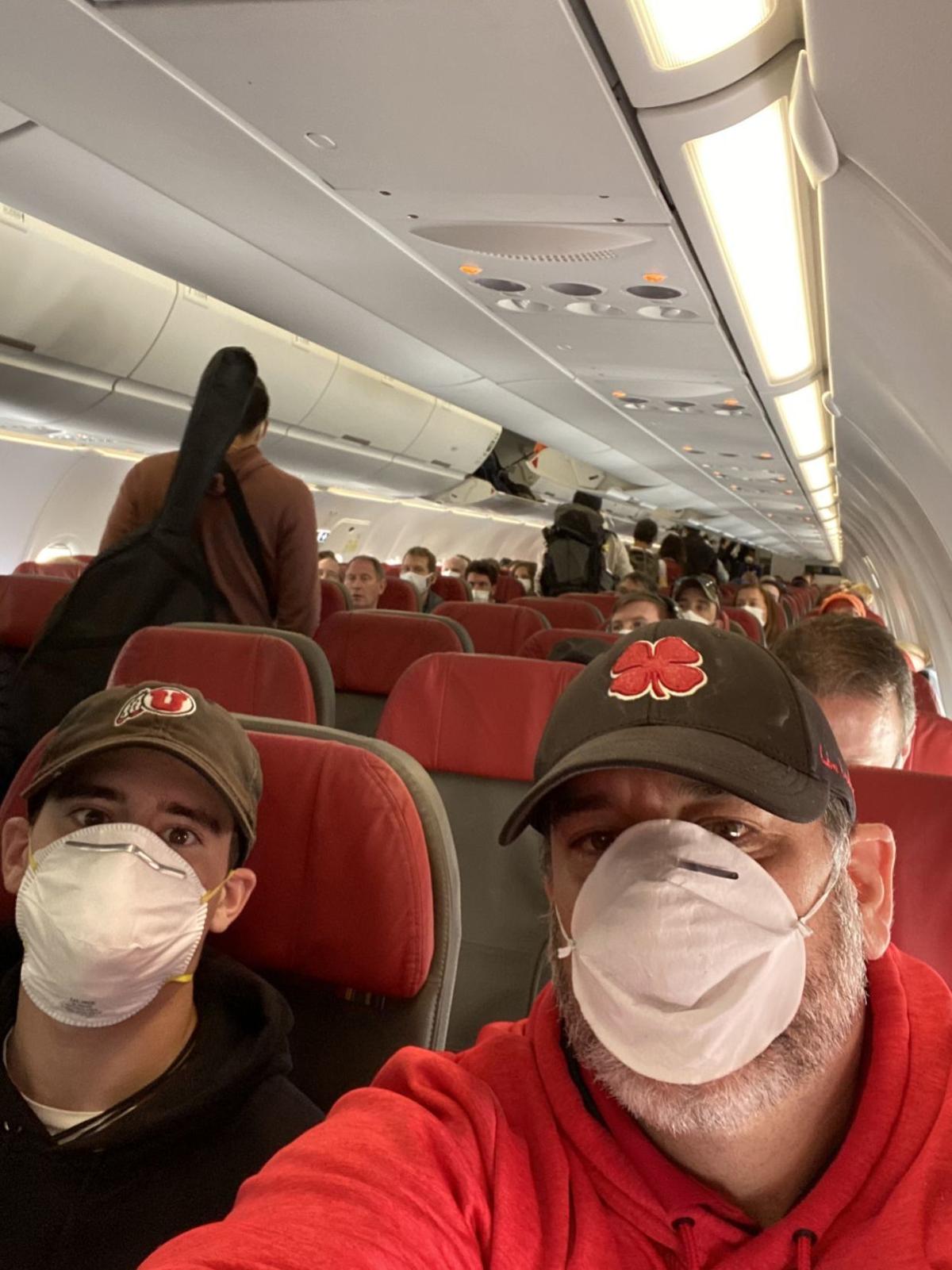 Shawn McDougal, left, and his father Mike don face masks as they board a U.S. embassy plane March 29 to fly back to the United States. 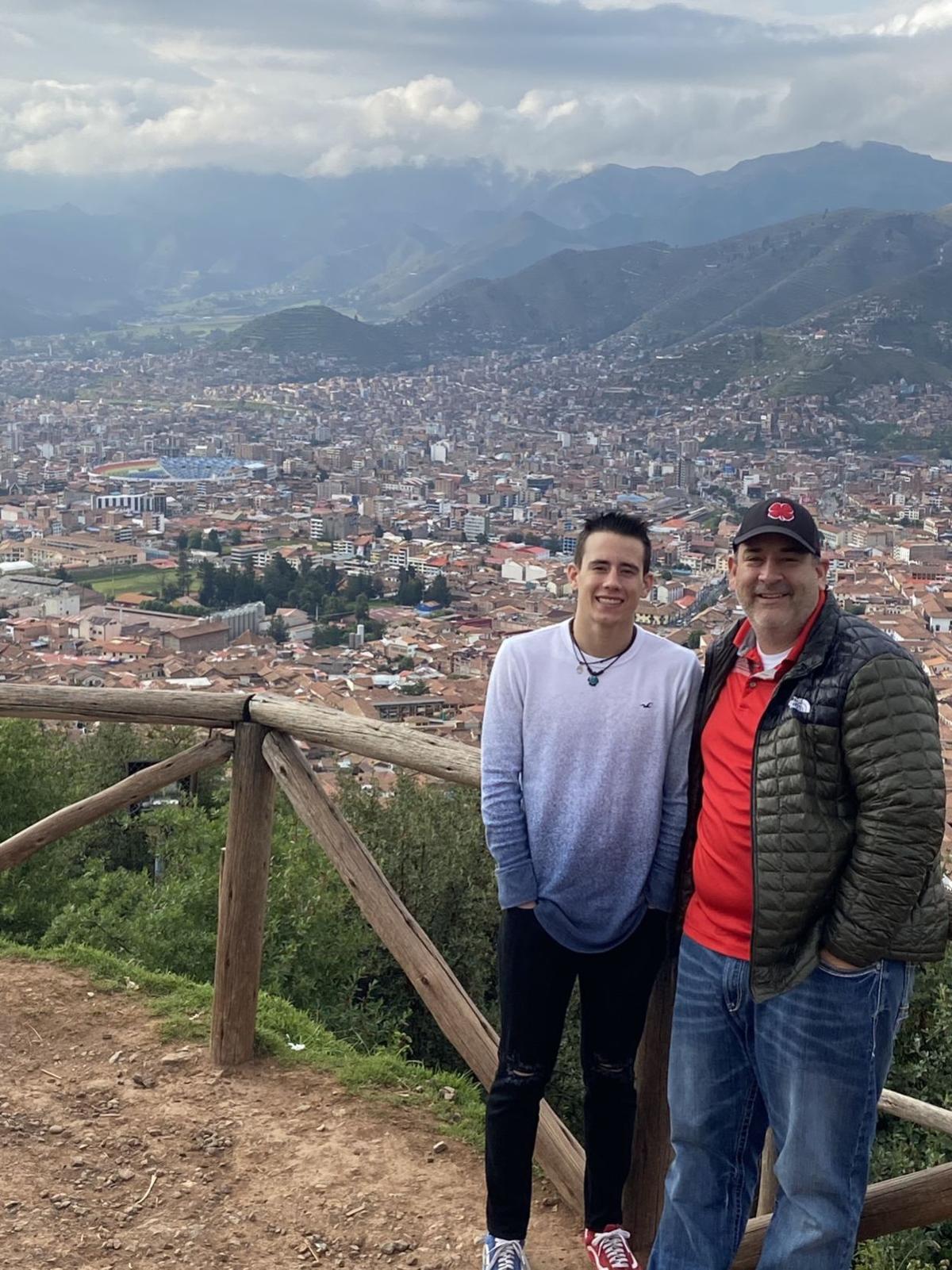 Shawn McDougal and his father, Mike, pose for a photo with the city of Cusco, Peru, in the background.

Shawn McDougal, back row in red shirt, explores the Amazon rainforest with his tour group.

Shawn McDougal poses next to an alpaca at a potato farm in Peru.

Shawn McDougal, left, and his father Mike don face masks as they board a U.S. embassy plane March 29 to fly back to the United States.

Shawn McDougal and his father, Mike, pose for a photo with the city of Cusco, Peru, in the background.

Shawn McDougal’s father made him a promise before he started high school. If he received perfect grades all four years, he could travel anywhere in the world as a senior.

Little did McDougal know, he would ultimately be trapped in that dream destination during the global COVID-19 pandemic.

McDougal lived up to his father’s challenge, and then some.

With graduation approaching next month, McDougal has earned straight A’s throughout high school. With weighted AP classes, he has a 4.7 GPA, good enough to be the valedictorian at Combs High School.

A two-sport athlete, McDougal was on the varsity wrestling team all four years and also played varsity football the last two years. In February, he was a top-eight finisher in the 120-pound weight class at the Division III state wrestling tournament in Prescott Valley.

When it came down to making his decision on where to travel, McDougal seriously considered Scotland, where most of his ancestors are from.

“But it’s very rainy there,” he told PinalCentral, adding he didn’t want to spend his spring break in a location where it was raining the whole time.

McDougal then focused on South America and chose Peru, a country of 32 million people that includes the Amazon rainforest and the ancient city of Machu Picchu.

On March 8, McDougal and his father, Mike, arrived in Peru. They were to stay until March 17, but the coronavirus outbreak changed everything.

Near the end of their trip, the president of Peru, Martin Vizcarra, closed the country’s borders and ordered that no one would be allowed to enter or leave Peru until March 30.

About a week later, McDougal said that order was extended from March 30 to April 14.

McDougal and his father tried frantically to get on a plane out of the country March 16. They took a train to Cusco, but when they arrived at the airport, all the flights had been canceled.

They scrambled to find a hotel to hunker down, knowing they were stuck in Peru for at least two weeks.

“Once we got to Cusco, that was when we thought there was no hope,” McDougal said. “[March 16] was a tough day emotionally because you didn’t know what would happen or what to expect going forward.”

Fortunately, the hotel where McDougal and his father stayed had enough food for the two weeks they were holed up there during the lockdown. Peru had imposed very strict orders about who could leave their homes and when, and it was mainly just to purchase food.

McDougal said the hotel had a restaurant that was fairly well stocked with food. He was able to eat breakfast and dinner every day. But as the two weeks dragged on, he said the food supply started to dwindle. He ate a lot of bread.

Knowing he wasn’t going anywhere for some time, McDougal tried to make the best of the situation. He became friends with some other people in his travel group, and he said they became like another family. He also used some of the time to work on school assignments.

Travis Miller, who coached McDougal in wrestling and football and is also his Spanish teacher at Combs, had been in Europe during spring break and had to come home early because of the pandemic. When he got home, he reached out to McDougal to see how his trip was going.

Miller was concerned when he first heard about his student being stuck in Peru.

“My first reaction was oh no!” he said in an email. “But to be honest, Shawn being intelligent and tough from wrestling and football, I knew he was going to be fine ... Of all the athletes and students I have, if any were to be stuck in a foreign country, Shawn is the one I would worry about the least.”

During this time, McDougal said he and his father were working with elected officials for help in getting back to the United States. They communicated with the office of U.S. Sen. Kyrsten Sinema, D-Ariz., and also talked with two members of the Arizona Legislature, Kelly Townsend, R-Mesa, and Tony Rivero, R-Peoria.

McDougal said Townsend and Rivero were especially helpful in efforts to get them on a flight to the U.S. On March 27, the U.S. embassy in Peru, located in Lima, started sending out one plane each day to fly U.S. citizens back.

On March 28, McDougal said the embassy announced commercial flights would resume. He thought he would hop on a plane at the airport in Cusco the next day. But the embassy then reversed course on that decision.

McDougal and his father had already checked out of their hotel and were told they would not be allowed to check in again. There was a stressful time of uncertainty before McDougal learned he would be able to get on an embassy flight the same day.

They flew from Cusco to Lima and then to Miami. Upon their arrival, Miami International Airport was strangely empty.

“It was completely dead,” McDougal said. “It really was crazy because in this country nothing is ever like that. It was a weird experience.”

What was also “surprising,” he said, was how little time they spent going through customs. It was one question about what country they had traveled from, and that was it. No one was tested for COVID-19 or received any sort of health screening.

After staying in a Miami hotel that night, McDougal and his father were on a plane back to Phoenix the next morning, March 30. He said the plane was almost empty, excluding flight personnel.

When the plane made its descent into Phoenix, a wave of relief and happiness washed over McDougal.

“I never loved the city of Phoenix more than I did that day,” he said. “I felt at peace and that this is my home. It felt great to be back to what is normal.”

Despite the drama and involuntary extended stay, McDougal looks back on the trip fondly. He’s happy with the choice he made on what country to explore.

“I love Peru now. It’s such a cool country,” he said. “The landscape is so diverse ... it’s completely green.”

However, McDougal chuckled, he doesn’t have plans to go back anytime soon.

With all schools in Arizona closed for the remainder of the academic year, McDougal won’t experience some memorable senior events. But the idea of missing prom and other things didn’t concern him.

As valedictorian, he will really miss the graduation ceremony and giving his speech to the Class of 2020.

McDougal still plans on writing and delivering a speech, he just doesn’t know what that will look like. School administrators are discussing options. He may end up doing some sort of video address to his classmates.

McDougal is headed to the University of Southern California and will study through its World Bachelor in Business program. He will spend his first year at USC in Los Angeles, his second year in Hong Kong, his third year in Italy and then return to USC for his senior year.

But while many lessons can be learned in the classroom, some things can only be learned through life experience. McDougal said living through the pandemic, and his experience in Peru, taught him a couple of things.

“You have to make the most out of life that you can,” he said. “Do things you want that make you happy so you don’t have regrets.”

The Wright Perspective: Pinal's best on gridiron in last 3 years

Now is as good a time as any to look back, and it’s of course a great time to make lists. He…