Tiny particles are subject to Brownian motion, where they dart about randomly. This allows cloth masks to have more efficiency than expected. Image composed by Christine Lewis 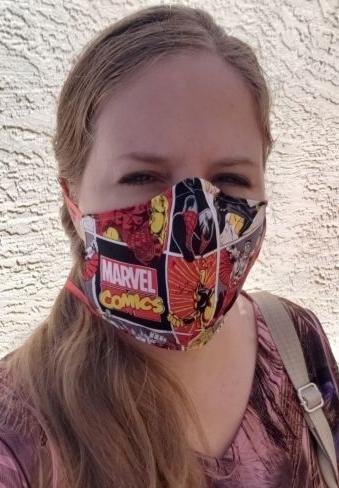 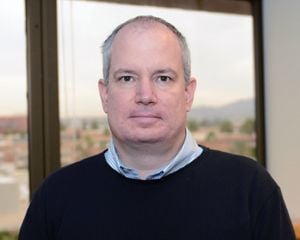 TEMPE -- Sarah Arrowsmith, a scientist and lab coordinator with the Arizona State University Biodesign Swette Center for Environmental Biotechnology, was stuck at home starting in mid-March — just like the rest of us. But unlike others, she pulled out her sewing machine and set to work making masks.

Arrowsmith was prompted to action after Diana Calvo, a doctoral candidate in the center, asked whether the center could donate face masks to her husband’s medical facility. The global shortage of personal protective gear has resulted in countless medical facilities scrambling for supplies. Unfortunately, the center had already donated its masks elsewhere, but it occurred to Arrowsmith that she could still help.

“Sarah searched for masks everywhere — online, Home Depot, fire departments and veterinary offices, to name a few. But she could not find any,” Calvo said.

After looking at a 2013 publication that studied the effectiveness of cloth masks against viral particles, Arrowsmith was convinced that homemade masks could work. So, she made a pattern, pulled out some cloth and constructed some masks on her own. In just 48 hours, she not only sewed masks for the medical facility but also for several local first responders, totaling 50 masks in all.

“She did this without asking for anything in return and even made them sustainable — a quality we really prize in environmental engineering,” Calvo said. “The medical facility can autoclave and reuse them.”

Arrowsmith was ahead of the curve for a nationwide mask-making movement that was just gearing up. Countless people under quarantine are dusting off sewing machines to make masks for health care workers who are pleading for help. A general consensus is that they are better than nothing. The American Hospital Association (AHA) agrees. In late March, the AHA launched the 100 Million Mask Challenge calling on manufacturers and individuals at home to produce essential gear for medical facilities across the nation.

Cloth masks are the first line of defense

As of May 13, the U.S. reported 1 million confirmed infections and 84,243 fatalities, far surpassing the statistics of other countries. With the spread of COVID-19 so rapid and red zone eruptions unpredictable, the Centers for Disease Control and Prevention redirected its guidelines to advise all individuals leaving their homes to wear masks made from cloth.

“This absolutely helps,” said Pierre Herckes, a professor in the ASU School of Molecular Sciences and an expert in aerosolized particles that can affect health. “The most effective action right now is social distancing, but the cloth masks offer a first line of defense if you have to go out in public.”

“Tiny particles don’t just move in a straight path — they are subject to Brownian motion — darting about randomly,” Herckes said. “Due to this —the masks catch more than you would imagine in both directions. They protect and prevent much of the viral particles in droplets from dispersing into ambient air.”

Infected individuals can shed the virus for three to 10 days before showing symptoms — if they show symptoms at all. So, foregoing a mask because you feel well can still pose a danger to others.

“Imagine someone sneezes at the grocery store. The droplets expelled can actually stay in the air from 30 minutes to hours. This is because airborne droplets evaporate, and the smaller particles left behind remain suspended,” Herckes said.

Maskless crowds are especially daunting when considering air transfer through a ventilation system to rooms where people think they are isolated.

Herckes does point out that it’s uncertain as to how long the virus is "active" indoors when suspended since there are very few studies on this. Although, there was a recent report from the U.S. White House that shows when the virus suspended in the air outside, it is active for one to 1½ hours.

N95 masks are the gold standard for catching tiny particles but should be reserved for COVID-19 health care workers. So, Herckes began testing different materials he found at home to see what would be effective for public use. Even with one layer of a T-shirt, the test results showed the masks captured larger droplets pretty efficiently.

Herckes and Arrowsmith decided to put her multilayered, home-made mask to a real test; mask versus particle.

“I really did want to know if my masks were making a difference,” Arrowsmith said. “There are such mixed messages about masks in the media right now.”

Zhaobo Zhang, a graduate student in Herckes lab ran the test. The lab used a special device that disperses particles of different sizes against the mask material that is clamped in place.

“These results are quite good,” Zhang said. “But we must remember that this test was run quickly under controlled conditions, different from official testing methods. Our set-up presses the mask material tightly together and the material will be much looser when you are actually wearing it.”

Arrowsmith’s mask caught roughly 95%-99% of particles that ranged in size between 0.07 and 0.209 microns — that is at least 1000 times smaller than the diameter of a human hair. These small particles, some smaller than virus particles, are typically the most challenging to capture. Larger particles or droplets are more readily stopped.

“A lot of the coughing and sneezing droplets are in the range of a few microns to tens of microns (a human hair is approximately 75 microns). However, studies show that we exhale smaller particles too, called microdroplets — not only related to sneezing or coughing — but also just speaking and exhaling. These can be hundreds of times smaller,” Herckes said.

“It is always true with cloth masks that there can be particles that make it through the gaps between the face and the mask edges, so the tighter the fit, the better. I must admit Arrowsmith’s did much better when compared to other homemade masks — which is great,” he said. The secret was that she used two layers of cotton and had a HEPA filter she placed inside to catch even the tiny particles.

“Actually, this makes me really happy and now I know it was worth the effort. I guess the moral of this story is that using homemade masks will make us safer,” Arrowsmith said.

Arrowsmith tried several patterns before she found a mask that fit well and had a pocket that could fit a HEPA filter.

How to make a mask

Arrowsmith constructed the masks with ties rather than elastics to avoid sterilization or disinfectant breakdown.

Double-layered masks constructed from all-cotton tea-towels show the most filtration promise. However, there is a tradeoff between comfort, breathability and filtration. A double layer of high-weave, all-cotton material is a safe bet. If sewing yourself, pre-wash the material to make sure to account for any shrinking.

“I used a 100% cotton cloth with two layers. I theorized that the mask should capture more than half the particles it came into contact with. I also added a pocket between the layers for an insertable HEPA (high-efficiency particulate air) filter which would make the capture rate even higher. I purposely stayed away from synthetic blends since I wanted my masks to withstand under high heat or chemical sterilization,” said Arrowsmith.

Christine Lewis is PhD candidate and science writer at the Biodesign Institute Center for Applied Structural Discovery and the School of Molecular Sciences at Arizona State University. She can be reached at 480-727-8678 or christine.lewis@asu.edu.