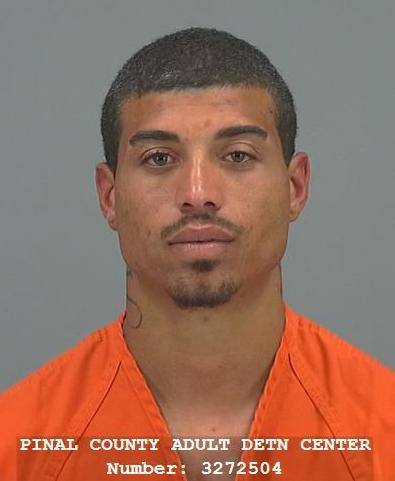 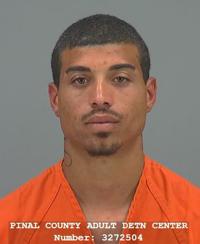 On March 8, police attempted to conduct a traffic stop on a speeding vehicle being driven by Deatrich Vaughn. Instead of stopping, Vaughn allegedly spun the vehicle around and drove past the police, and into the Desert Palms apartments. Vaughn and a passenger allegedly fled from the vehicle on foot. After interviewing several subjects and identifying the driver, police have determined Vaughn should be charged with unlawful flight from law enforcement, but the case was suspended for further follow up.

On March 14, police stopped a car for speeding and learned that the driver, Ariel Perez Jr., had had his license suspended. A records revealed Perez had four active Coolidge warrants. Perez was transported to the Coolidge Police Department, and then Core Civic.

On March 17, police stopped a car with its right tail light out and made contact with Marcel Brown and Savannah Valenzuela. Police allegedly identified a piece of tin foil with residue in the driver’s door, as well as a cut straw in Brown’s pocket. Similar paraphernalia was located in Valenzuela’s purse. The two were cited for drug paraphernalia and released.

On March 19, Brian Manuel was arrested during a traffic stop when police found that he was driving on a suspended license. A search of the vehicle revealed a broken glass pipe, as well as bag with 3.8 grams of meth. The passenger, Kristen Antone, was also arrested.

On March 19, Gabriel Sanchez and Tonie Jaworowski were arrested during a traffic stop when police allegedly found fentanyl pills in their vehicle. A records check also showed Sanchez had active Pinal County warrants. Jaworowski reportedly told police they were planning on selling three fentanyl pills for $30 to a buyer in Florence. Sanchez and Jaworowski had charges forwarded of narcotics possession and for sale, and Sanchez had an additional charge of DUI. Jaworowski was released but Sanchez was transported to Pinal County Adult Detention Center.

On March 20, police made contact with Dantaysha Richardson about a recent shoplifting incident. Richardson reportedly admitted to stealing the items and identified a second suspect as Brian Araujo. The two of them concealed several items in suitcases. Richardson and Araujo were both cited for shoplifting, although police could not locate the latter at their confirmed residence.

On March 21, Miguel Magallanez was arrested during a traffic stop when police noted an open container of alcohol in the vehicle. Magallanez did not have a valid driver’s license and a records check revealed 11 active warrants out of Eloy and Florence. A breath test allegedly showed Magallanez had a BAC of .133. Magallanez was cited for DUI and consuming liquor while operating a vehicle, and was transported to Pinal County Adult Detention Center for the outstanding warrants.

On March 21, Jose Viola was arrested after a search of his vehicle allegedly revealed several plastic bags with one gram of meth. Viola was turned over to his family for medical care, and charges were forwarded to the Pinal County Attorney’s Office.

On March 24, police executed a search warrant in the 400 block of West Bealey Avenue for a subject who had allegedly burglarized a local building several days prior. Police made contact with Gerardo Nunez, who reportedly attempted remove a rolled up sock from his person before arrest. The sock contained a baggy with 3.8 grams of meth. Inside the residence, the police found two people with active warrants, Luis Alvarez and Christopher Jones. All three were arrested.

On March 26, police were notified of a shoplifting incident and identified the suspect’s vehicle on Arizona Boulevard. The driver, Isaiah Phillips, was stopped by police and reportedly admitted stealing a can of Four Loko, which was open in his vehicle. Phillips was cited and released for shoplifting and having an open container. The alcohol was valued at $3.29.

On March 27, Joel Martin Rico-Sanchez was arrested during a traffic stop when he allegedly failed a sobriety tests and a breath sample showed a BAC of .259. Rico-Sanchez admitted to drinking earlier that evening and was transported to Pinal County Adult Detention Center for Aggravated DUI.

On March 27, police conducted a traffic stop on a vehicle driven by Maria Lopez. A search of Lopez’s belongings allegedly revealed aluminum foil with a burnt fentanyl pill, as well as a glass smoking device on the floorboard. Inside the glove box police found a bag with 1.1 grams of meth. A records check also showed Lopez had two active Coolidge warrants. Lopez was arrested for drug possession and paraphernalia, and was transported to Core Civic.

On March 28, Malcolm Thornton was arrested for a probation violation during a traffic stop. The driver said Thornton had asked them to speed away when they saw the police. Thornton was transported to Pinal County Adult Detention Center.

On March 31, police responded to a call about suspicious suspects in the 800 block of West Pima Avenue. At the scene, police made contact with Jorge Rascon and Alicia Garcia, both of whom had active warrants. Rascon initially gave a false name and police found a bag with trace amounts of meth in Rascon’s pocket, and a glass smoking pipe in Garcia’s. Both were transported to Pinal County Jail.

On March 31, Lucrecia Long was allegedly found passed out in the driver’s seat of a parked vehicle with the engine still running. Police identified paraphernalia used for smoking fentanyl in Long’s hand. A records check confirmed Long had an active Pinal County warrant. Long asked to go to the hospital for her ankle and was transported to Florence Anthem Hospital, but was arrested after leaving there for Aggravated DUI. In Long’s vehicle, police found four fentanyl pills and pieces of aluminum foil. Long was transported to Pinal County Adult Detention Center for the DUI and drug possession.

On April 1, Alfonzo Villalobos was arrested for DUI during a traffic stop. Villalobos was cited and his drivers license was suspended before being released.

On March 4, police were notified of a possible phone theft. The victim said they’d lost their phone while shopping and after calling the phone, thieves on the other end were demanding $20 to return it. The victim said they offered $10 during a potential hand-off but was refused. The case is open as there is potential photographic evidence of the suspects and their vehicle.

On March 11, police were notified that Dantaysha Richardson and an unknown suspect had shoplifted at the Walmart in Coolidge. The two were allegedly asked by a store clerk to pay for the items before they left, but the suspects ignored them. Altogether the suspects stole several items valued at $140. Police recognized Richardson in the video surveillance footage, while the second suspect was not identified until later.

On March 12, police filed a report to help assist a victim recover funds from a credit card theft. According to the victim, a company called Strand products charged them almost $375 across six transactions, none of which were actually made.

On March 16, police were notified by a victim of credit card fraud. The victim offered bank statements which showed fraudulent charges totaling $1520. The victim also said they’d received a notification that another person, named, had been attempting to log into their account. At the moment the case is suspended.