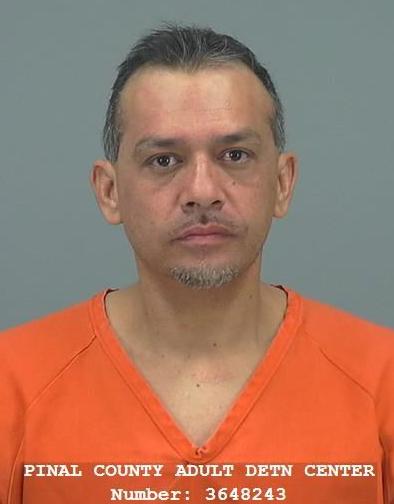 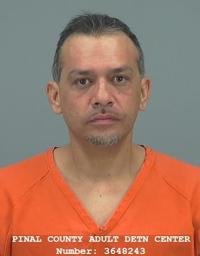 On Feb. 20, police stopped a vehicle that had been driving around in a circle, with a cracked windshield and missing driver-side mirror. The driver, Tonya Heidel, agreed to a search and police reportedly found nine fentanyl pills in her pockets, as well as a small amount of cocaine. Full charges are pending lab results.

On Feb. 22, police arrested Omar Mejia when they found him in driving a vehicle without a license. A records check showed Mejia had two active warrants out of PCSO and Eloy. Mejia was transported to Pinal County Adult Detention Center.

On Feb. 25, police received a report that Brandon Bolinsky was acting suspicious and trying to retrieve drugs he’d given someone by mistake. Bolinsky confirmed to police he was trying to get drugs back. Police were able to recover the contraband item, which turned out to be 0.5 grams of meth. Bolinsky also had a glass pipe with him. Bolinsky was transported to the county jail for charges including drug possession and paraphernalia.

On Feb. 26, Ashley McDaniels was arrested for three active Coolidge warrants, and upon arriving to Core Civic jail, McDaniels was allegedly found to have a glass pipe with burnt residue in her pocket. Charges of drug paraphernalia were forwarded to the Pinal County Attorney’s Office.

On Feb. 27, police conducted a traffic stop on a vehicle being driven by Terence Springer. A records check showed that the passenger, Cobie Slaughter, had an active warrant out of Eloy. A search of the vehicle reportedly revealed 1.3 grams of cocaine concealed inside a toy rubber hamburger. Slaughter was charged with narcotics possession, and Springer was cited for driving on a suspended license.

On Feb. 27, police arrested four persons in the same vehicle who had active warrants out of Coolidge and Casa Grande: Anessa Triste, Juan Armenta, Daydrian Sherman and Christian Goodin. Armenta, Sherman and Goodin all allegedly had drug paraphernalia on their persons and received citations. For the active warrants, Goodin and Armenta were transported to Core Civic, while Triste and Sherman were sent to Pinal County Adult Detention Center.

On Feb. 27, Austin Weissenborn was arrested during a traffic stop when police reportedly found 2.2 grams of meth in his pants pocket and in the driver’s door handle. Weissenborn was transported to Pinal County Adult Detention Center for possession of narcotics.

On Feb. 27, Taaja-Enchante Munir was stopped by police for swerving and stopping in the street for a prolonged period. Munir failed several sobriety tests and a breathalyzer reading showed a BAC of .154. Munir was transported to Pinal County Jail and charged with one count of DUI.

On Feb. 27, police stopped a vehicle driven by Christopher Lennon for speeding. A records check showed Lennon had his driving privileges suspended and that his vehicle had no insurance. Lennon also had an active warrant out of Pioneer Justice Court. Lennon was cited for driving without insurance or privileges, then transported to Pinal County Adult Detention Center for the warrant.

On Feb. 28, Juan Vera was charged with criminal damage when he was identified as breaking the windows of several vehicles in the 700 block of West Gibson Avenue. Police could not locate Vera at the time but charges were forwarded and a summons was requested.

On Feb. 28, Jason Posey was cited for smashing someone else’s phone and shattering the screen. The phone was valued at $200. Posey reportedly admitted to breaking the phone when police arrived on scene.

On Feb. 28, Anna Charabirra was involved in a single vehicle collision, and was determined to have been driving under the influence. A breath test back at the police station showed a BAC of .185, and Charabirra was transported to Pinal County Jail for aggravated DUI.

On Feb. 28, Dominique Fields was stopped for a traffic violation and was arrested for DUI after reportedly failing several sobriety tests. A breathalyzer test showed no alcohol intoxication, however Fields told police “unknown persons” had put illegal substances into her body. The case is open pending lab results.

On March 1, Angela Stuen was charged with dangerous drug possession when police conducted a traffic stop and reportedly found 0.4 grams of meth inside her wallet. Stuen was released but charges were forwarded to the Pinal County Attorney’s Office.

On March 1, James Crouse was cited for trespassing when he parked his vehicle on someone else’s property and fell asleep after they asked him to move it. Crouse agreed to move his vehicle.

On March 1, police were dispatched to the 1400 block of South Navajo Lane to investigate a reported assault. Video footage reportedly shows Lucrecia Long getting into a car, driving at the victim, and damaging a couch and drywall at the back of a garage. Long did allegedly strike the victim with her vehicle, however the victim reported no injuries and refused medical treatment. The damage to the couch and wall were estimated by the victim to cost around $275. Charges against Long of aggravated assault and criminal damage were forwarded to the Pinal County Attorney’s Office.

On Feb. 24, a vehicle was allegedly stolen in the 600 block of North Main Street. The victim still had keys in their possession and so was not sure how the vehicle was broken into. The victim also reported that they’d received a text message taunting them about the theft. The vehicle is valued at approximately $10,000. The following day, the vehicle was located in Las Vegas, in drivable condition and with no damage.

On Feb. 24, police were dispatched to the 900 block of West Lindbergh Avenue in regards to theft of a large amount of copper wire. The wiring, which was removed from a home going through a remodeling, was valued at $12,000. With no suspects identified, the case was suspended.

On Feb. 24, police were notified of an alleged vehicle collision with a building on Central Avenue by an orange car. The police later made contact with a man who said the vehicle had rear-ended them and fled towards Central Avenue. Surveillance footage from across the street shows the orange Dodge Charger hitting the building and driving away. The building sustained minimal damage with some irrigation tubing broken, valued at $80. The case was suspended.

On Feb. 28, police were notified of cars driving recklessly in the parking lot of the Pinal County Fairgrounds. A witness identified vehicles performing maneuvers such as “donuts” and then confronting them. Cell phone video from the witness shows at least one driver taunting them before driving away.

On Feb. 28, police were dispatched to a reported accident on Central Avenue and found a Toyota Camry with heavy rear end damage. The driver said a vehicle had hit the back of their car, but then they had both pulled over and the other person had agreed to give the victim $400 in cash for the damage.