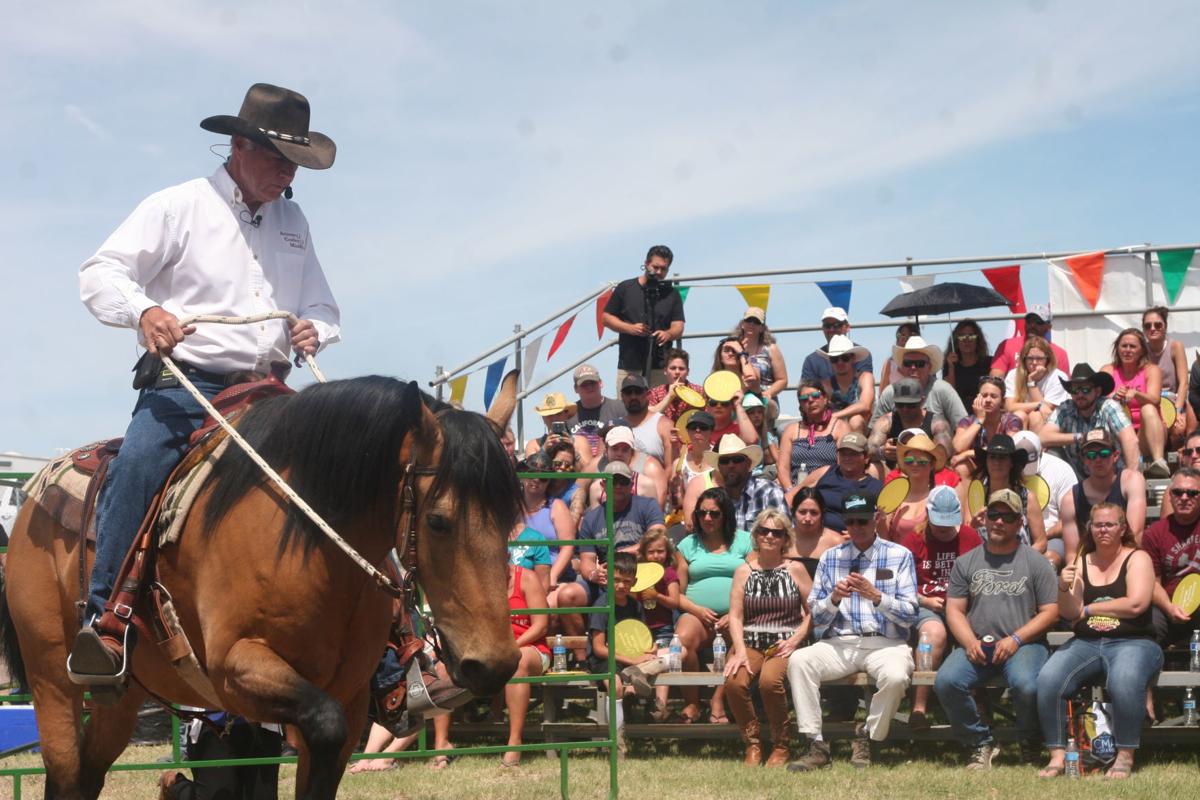 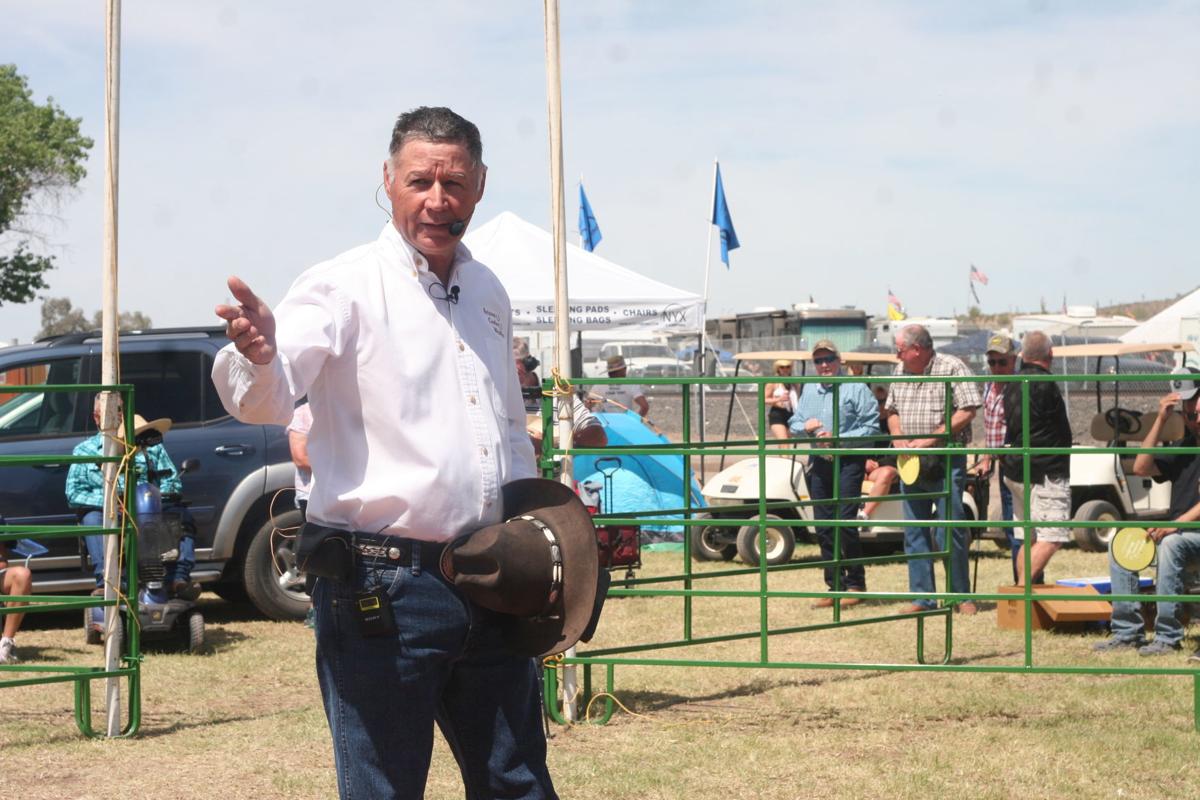 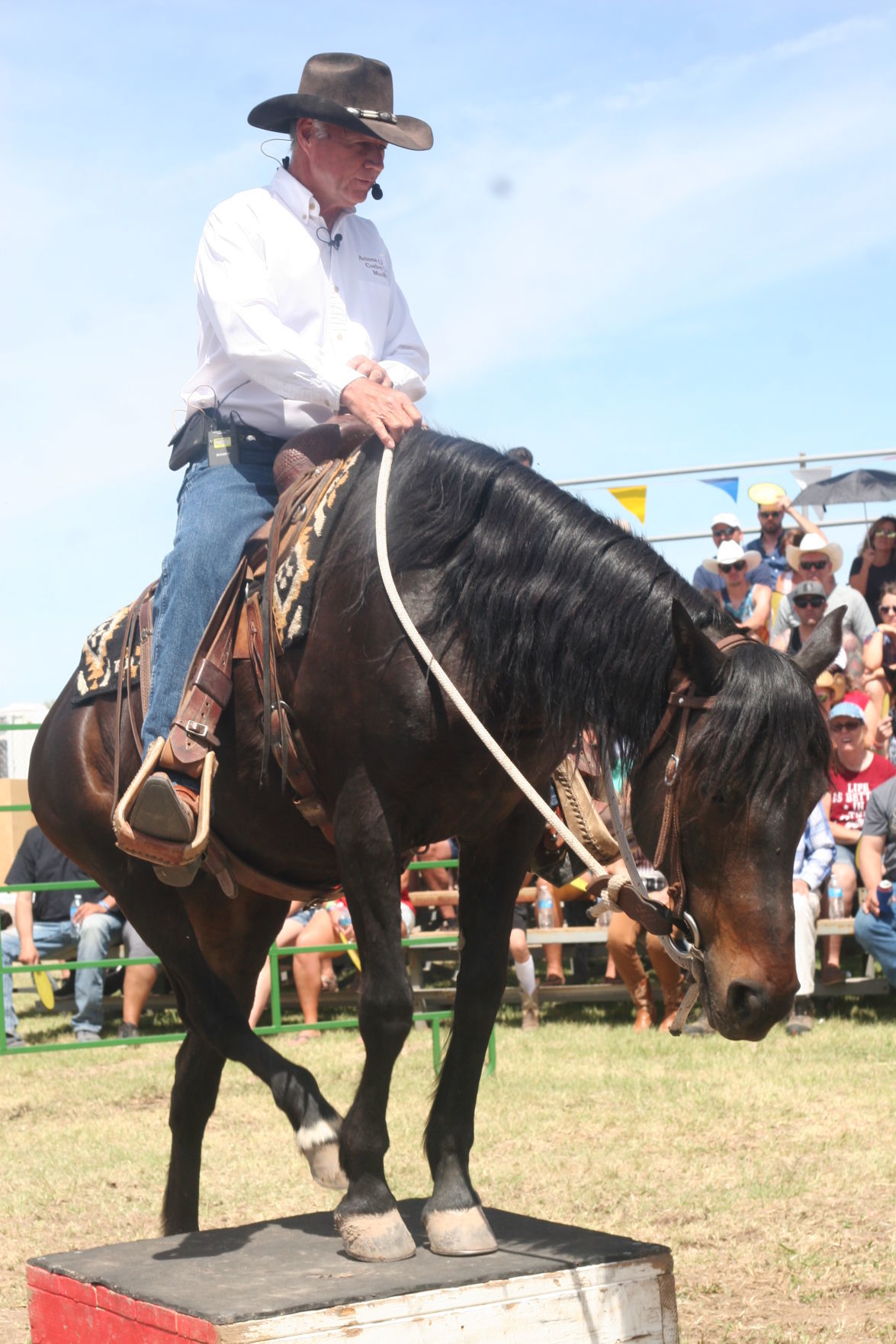 As he leads a horse named “Sidney” over obstacles, Pastor Randy Helm discusses how a person can respond to obstacles in life during Cowboy Church Sunday at Country Thunder.

As he leads a horse named “Sidney” over obstacles, Pastor Randy Helm discusses how a person can respond to obstacles in life during Cowboy Church Sunday at Country Thunder.

FLORENCE — They came dressed in hats, sunglasses and concert T-shirts, some low-cut or strapless. Rachel Feldmeir, 33, of Arizona City, even brought a little dog, and took her place with 200 others on warm metal bleachers at midday Sunday at Country Thunder. More people brought their own seats to listen just outside the arena. A couple of dozen more people stood.

A choir could be faintly heard singing “Church in the Wildwood” out of the speakers, before a spurs-wearing cowboy came forward, took off his hat and opened the meeting with prayer.

Cowboy Church was more apropos than ever. It was Palm Sunday, the beginning of Holy Week. Pastor Randy Helm noted it’s the day Christians celebrate Jesus riding into Jerusalem on a colt.

Helm also rode a couple of horses — ones he knows well from Arizona State Prison’s wild horse training program, which he supervises. His sermons draw connections between people, horses and Biblical principles.

The only people to openly find fault with having church at Country Thunder, he told his congregation, are Christians who don’t get it. But it was no mystery to those in attendance Sunday.

“I thought it was really cool, It’s super-unique, something I’ve never gotten to see before,” Sierra Smith, 22, of Fresno, California, said afterward.

“I like how he used real-life demonstrations of what he was talking about – getting over obstacles and showing that more experience leads to higher chances of success over those obstacles,” added Alli Martin, 21, of Fresno.

But does it break the rhythm of everything else going on at Country Thunder?

“I think it fits in right,” Smith said. “I think it’s refreshing to have something like that.”

“I don’t think Jesus is ever out of place anywhere,” Martin said.

Loren Witt, 61, and his wife, Lisa, 54, of Tucson, came early for front-row seats. They’re longtime Country Thunder fans and have been to Cowboy Church before.

“We like it,” Witt said. “We used to have horses and we understand his sermons.” His wife added, “It’s like a visual aid, it’s hands-on. You feel like you’re getting what he’s throwing down. Because he’s showing you with the horse.”

Helm told the congregation when a wild horse enters his program, it’s like a person, dealing with things he doesn’t understand and that don’t seem fair.

As he led a horse named “Starbuck” over obstacles in the small arena, Helm preached that part of the answer is not seeing obstacles as the enemy, “but part of what God’s doing.” An obstacle may ultimately give you the reach, height or perspective to do what you couldn’t do before, Helm said.

Helm preached that even the apostle Paul said in his letter to the Philippians that he wasn’t perfect; he still had a ways to go, but he pressed on. Helm said that goes double for him.

“I try to preach to myself and hope I hit somebody. … When I get more perfect, I might start telling you how to live your life.”

Helm quoted Mark Twain, who said the two most important days of your life are the day you’re born and the day you find out why; and Picasso, who said the meaning of life is to discover your gift, and the purpose of your life is to give it away. Helm said it would be great if someone can look back someday and say, “I found my purpose in God at Country Thunder 2019.”

Some of the congregation clapped in time and sang along as members of the local band 10th and Main played “I Saw The Light.”

At the end of the hourlong service, Helm chatted with attendees, signed books, and prayed with a young man. He commented as the last of the congregation was leaving that the festival put him in a new location Sunday – his fifth year at Country Thunder -- and it appeared to be for the best.

“I think this was the best one. You’re reaching people who are actually out in the campgrounds.” He used to be tucked away in the VIP area, but Sunday he was in the northeast corner of the grounds near the campers. “When you get more on their turf, they’re more relaxed and engaged. This gives me an opportunity to be where people are who would not normally go to church.” He said the audience appears to grow a little each year.

He told his listeners that people sometimes ask him if they’ll see a beloved dog or cat again in heaven. He tells them he doesn’t know. Horses, however, apparently do go to heaven, because the Book of Revelation says Jesus will return on a horse, he said.

He also said next year he’d try to have more seating in the shade. For more information, visit azcowboyministries.com.