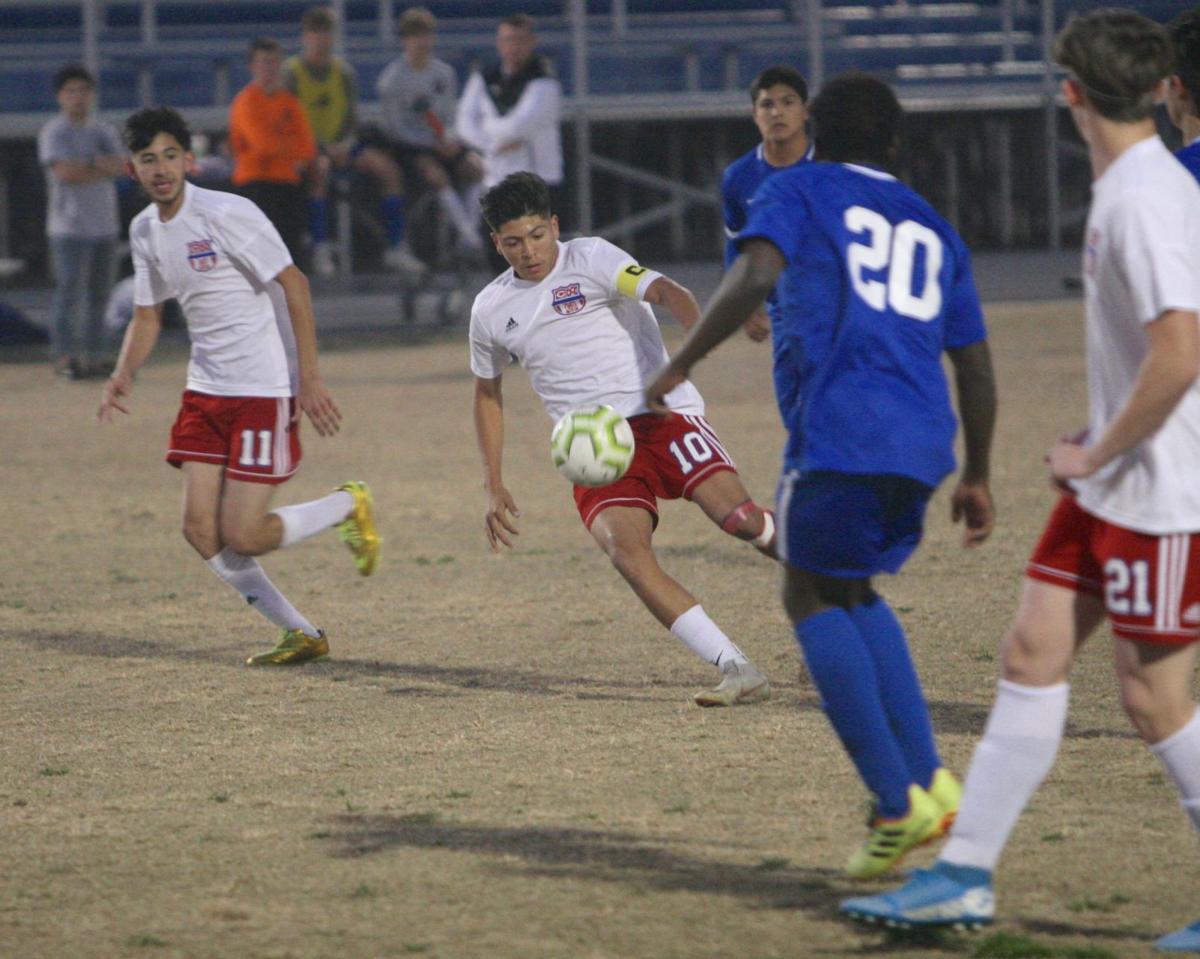 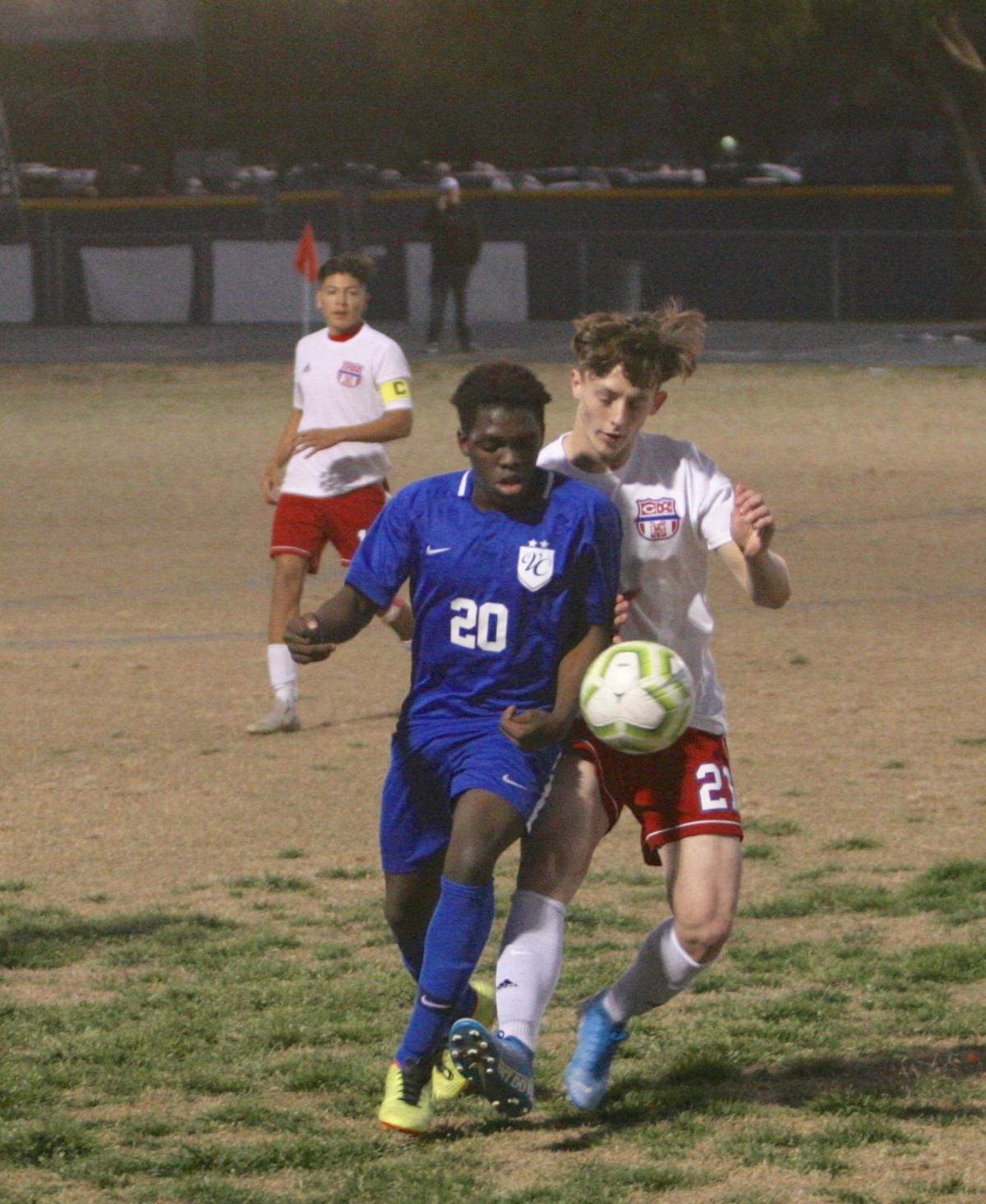 Chandler Valley Christian’s Telese Kamiang battles for the ball with Coolidge’s Eddie Whipple during the 3A state play-in game Friday. 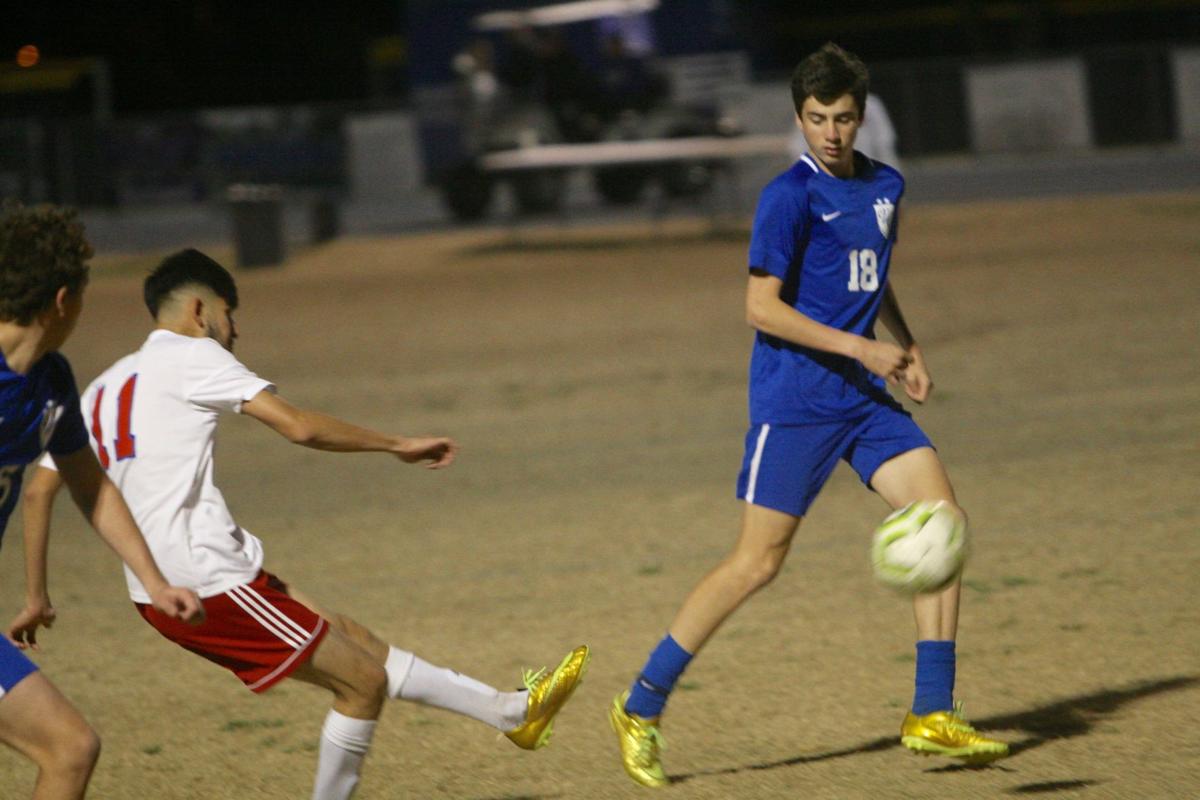 Coolidge’s Julian Valles gets a shot off late in the play-in game against Chandler Valley Christian on Friday.

Chandler Valley Christian’s Telese Kamiang battles for the ball with Coolidge’s Eddie Whipple during the 3A state play-in game Friday.

Coolidge’s Julian Valles gets a shot off late in the play-in game against Chandler Valley Christian on Friday.

CHANDLER — The Coolidge boys soccer season ended Friday in a game where both sides showed plenty of aggression, but included two too many mistakes by the road team.

In the play-in round of the 3A state championship, the No. 20 Bears fell to No. 13 Chandler Valley Christian 2-0 in, with both goals coming as a result of some miscues by the young “Osos” roster.

“If we can get rid of the mistakes, even though we’re really young, this team can be really strong,” said Coolidge coach Terrance Rowe. “But these mistakes have cost us throughout the year.”

Both sides played about even for the whole first half. The Trojans were the first to get some successful runs of attack in, but they were unable to locate their shots anywhere near the goal to trouble Coolidge keeper Jaser Cervantes, who only needed to make one save despite all the pressure.

The Bears, meanwhile, maintained possession by playing out of the back and completing through passes to their sprinting forwards. A few times, they were able to find some space around the box, but the Valley Christian defenders did a good job recovering and forcing weaker shots that were easily saved.

After coming out of the half still scoreless, the Trojans were able to get consistent pressure and force the Bears to play mistake-free soccer. Unfortunately for Coolidge, they couldn’t meet that standard. The deadlock was broken less than two minutes into the second when a long ball bounced toward goal, and the Bears defenders let it travel by until it found the feet of Dominic Zvada, who knocked it in to give the Trojans the 1-0 lead.

“When you’re just watching the ball go through, there’s not much you can do,” Rowe said. “You have to get your head on it, and they didn’t. … It’s hard to explain.”

The Coolidge defense was able to stabilize a bit after that, but they failed to get many successful runs on the other side of the field. The Trojans were able to take a lot of time off the clock without ever feeling too threatened to giving up the lead.

Then with 13:35 left in the game, Valley Christian was able to seal the game. The Coolidge defense had trouble clearing a low cross, and the ball bounced off several people before Brooks Butcher poked it into the right side of the net.

The Bears continued to fight the rest of the way, getting several shots up in the final minute. They all missed the target, though, and the season ended with a shutout.

With only two seniors on the team, Rowe is hoping this will be a positive learning experience. Captains Eddie Whipple and Yovani Ramirez are both sophomores and are set to lead the team on for years to come.

“I have high hopes for this team next year,” Rowe said. “We’ll touch on stuff at the beginning of next year to clean this up, but they had tremendous growth this season. We made big strides, and I can’t complain besides the mistakes. I hope learning those leadership skills moving forward is a big things for them.”