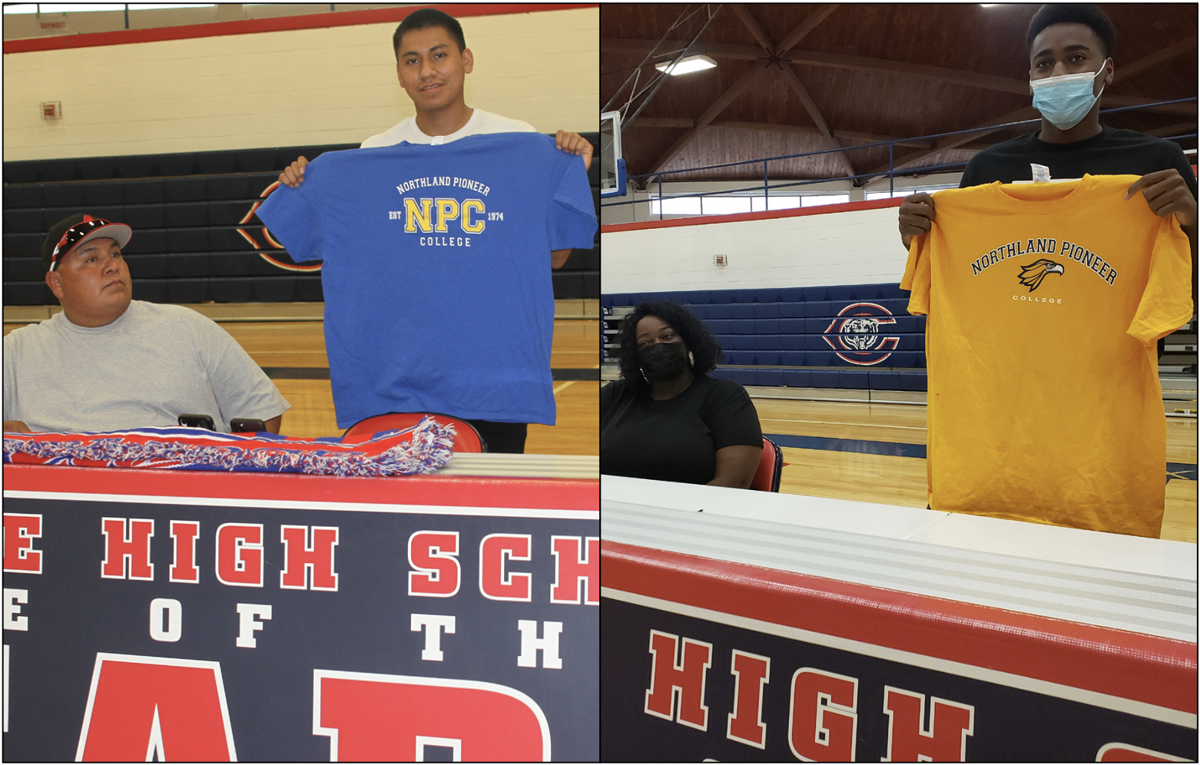 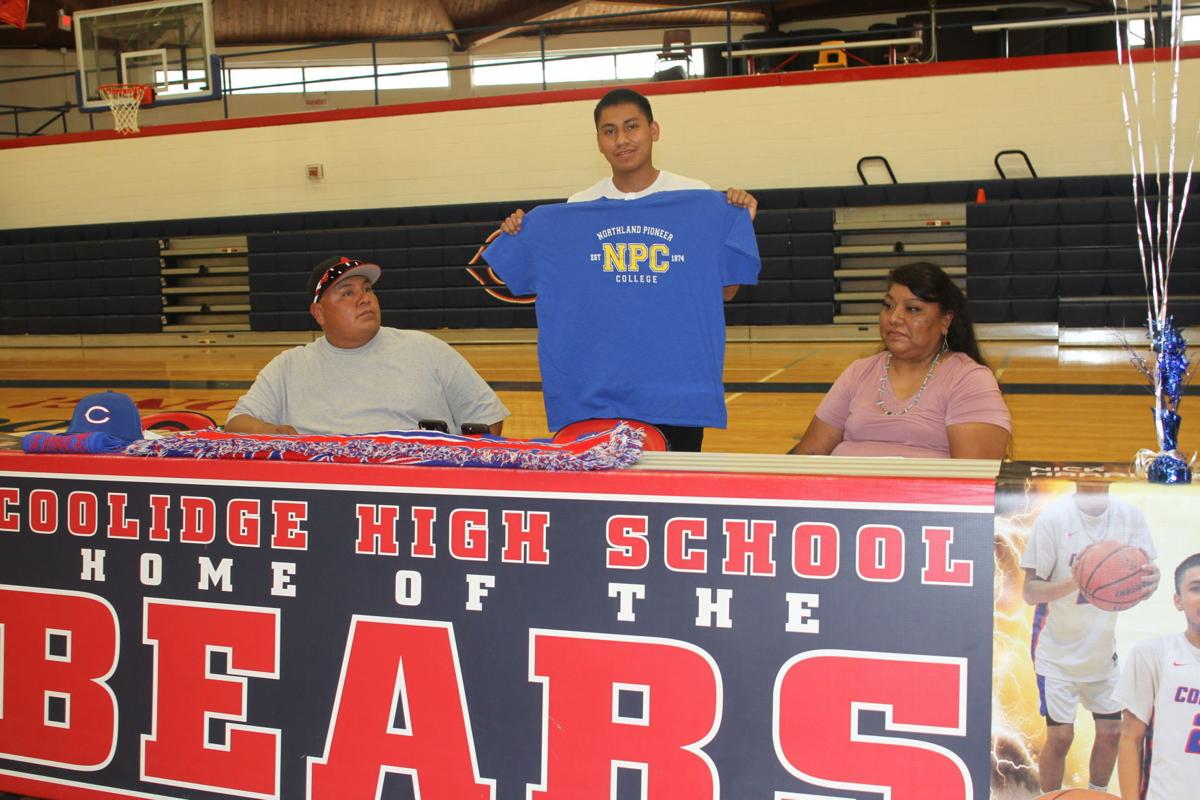 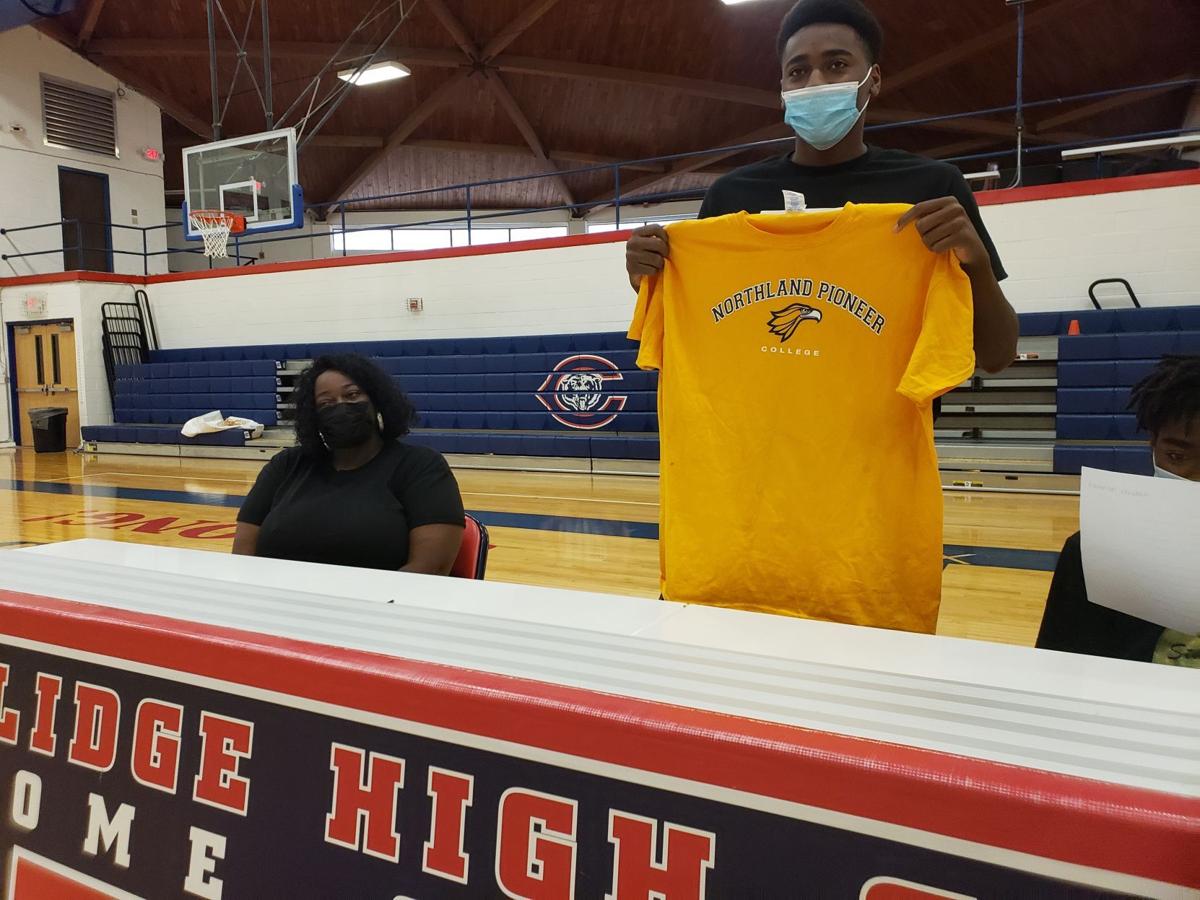 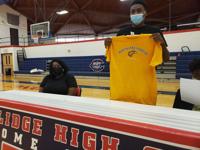 COOLIDGE — At least two Bears whose connections on the court lifted their team to new heights will stay together at the college level.

Nick Harrison and Kam Steward, who formed a dynamic two-man game between the former’s constant perimeter threat and the latter’s repertoire of post moves, will both be attending Northland Pioneer College in Holbrook.

The two held signing ceremonies almost a week apart, with Harrison keeping his decision under wraps from seemingly everyone but his parents on where he would be attending. He thanked all the other schools that had offered him a spot on their teams — Arizona Christian University had been particularly close — before pulling out a Northland shirt.

“It was a very tough decision,” Harrison said. “There were a lot of good schools, and I wasn’t sure if I wanted to go to a four-year or a two-year college. Mainly, it was about who recruited me the hardest, and their team and their education.”

Harrison broke out as a star shooting guard his sophomore year, lighting up the scoreboard from beyond the 3-point line. Then, an ACL injury took away his entire junior season. He came back this year much improved off the ball, allowing him to find open shots even when opposing defenses were singularly focused on stopping him.

Hailing from Sacaton, Harrison will also be playing for the newly formed Apache National Team, which has the same head coach as Northland. The national team is part of the United Nations of Basketball, and Apache will be playing tournaments in the American Southwest and Central America. Harrison hopes to be an inspiration to other kids growing up in the area.

“Pursue your dreams. It’s up to you on how far you want to make it and how dedicated you are,” Harrison said. “There’s a lot of peer pressure out there, and you have to face a lot of adversity. You just need to block out the hate and have a ton of vision.”

Then on Friday, Steward pulled out that same Northland shirt. Unlike Harrison, who has been well-known in youth basketball circles since he first walked on the Coolidge High School campus, this wasn’t a moment Steward always knew was coming. But after his grandfather died in December and he was faced with the possibility that his senior season would be canceled, he gained a focus on doing whatever it took to play in college.

That meant working one-on-one with head coach Dave Glasgow to develop post moves to unlock all his potential as a big man. The improvement from one year to the next was obvious, and his work on the other side of the court led to him being named Region Defensive Player of the Year.

But there was also plenty of work to be done in the classroom. Steward credited his teacher at the Coolidge Alternative Program, Matthew Radostits, for helping him catch up on all his credits, including well more than a year’s worth since the end of September. Steward said basketball was what motivated him to do all that work, and now it’s paid off with a college offer.

Those who might not know much about the Northland Pioneer basketball program have good reason. The White Mountains school eliminated basketball about 20 years ago, and only brought it back in 2020. But even beyond that, it’s not a traditional college program, instead functioning more like a club team that can play any kind of opponent who agrees to compete.

Northland is part of the National Club College Circuit, which includes a lot of teams that have dropped out of the NCAA system, or developmental programs for Division I schools. Scott Catt, who brought the team back as head coach along with assistant Madut Bol (son of NBA legend Manute Bol and brother of Denver Nuggets player Bol Bol), said this allows the team to pick opportunities that will provide players with the most exposure so they can catch on with bigger schools. He said all the players on his inaugural squad have signed on with four-year programs.

“They’re gonna have the same college experience anyone else would have, but we’re going to play in a different league,” Catt said. “I tell all the recruits, you don’t need to define yourself by anything other than being a great basketball player. You’re gonna be surrounded by very good players, and I think (Harrison and Steward) were attracted to the unselfishness of the team. I couldn’t tell you who the leading scorer was unless I go into the stat books.”

Catt, who lived in Tucson, said he models his gameplan off of University of Arizona great Lute Olsen, relying on outlet passes and nonverbal communication that keep defenses guessing, something that should be an ideal fit for Harrison and Steward. He said he is also a huge fan of Glasgow, who he got to see when the Coolidge coach was in Sierra Vista at Buena High School.

In fact, he has his eyes on some other kids from the Bears team. He wouldn’t mind turning the college into “Coolidge North.” He raves about how much he expects Harrison and Steward to bring to the team, though they will be adapting their games for the college level. Harrison will be playing more point guard, while Steward will be moving to the wing. But he believes they are ready for the challenge.

“What a job both those kids’ parents did,” Catt said. “I think the sky is the limit for both of them.”