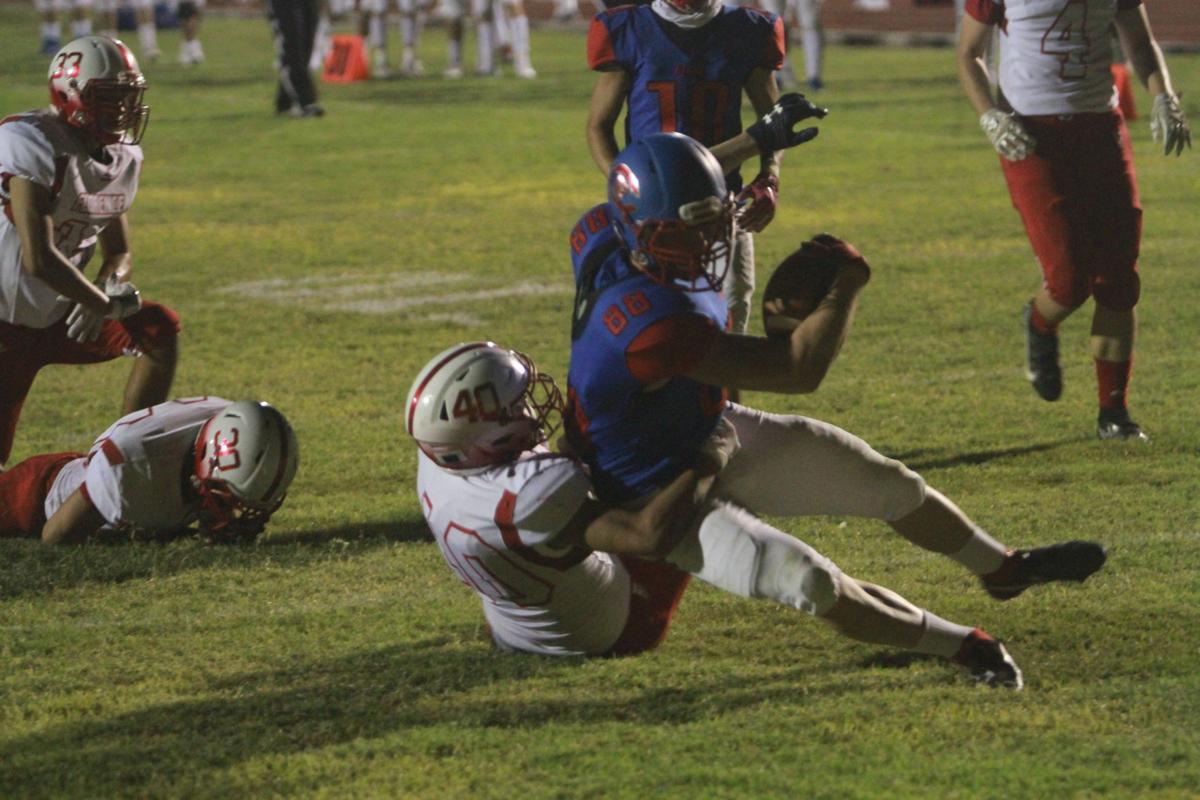 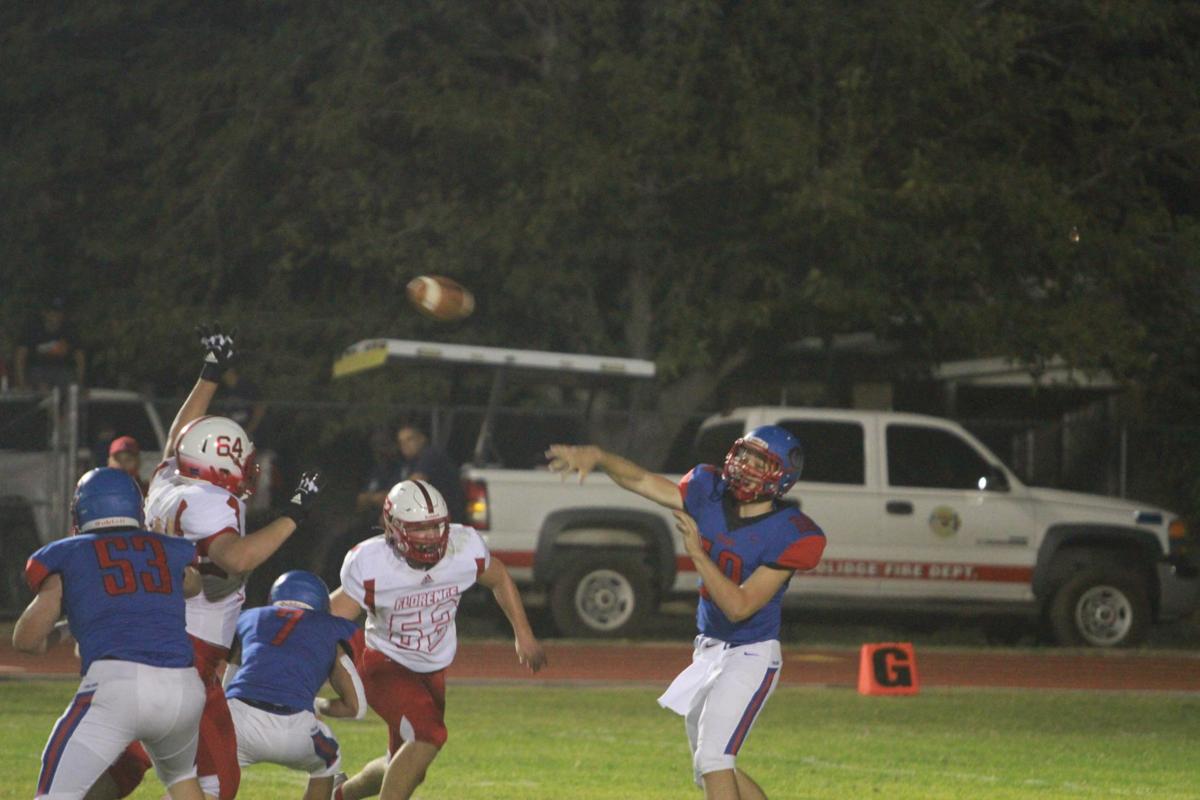 Coolidge quarterback Jacob Gunter throws a pass against Florence on Friday in Coolidge. 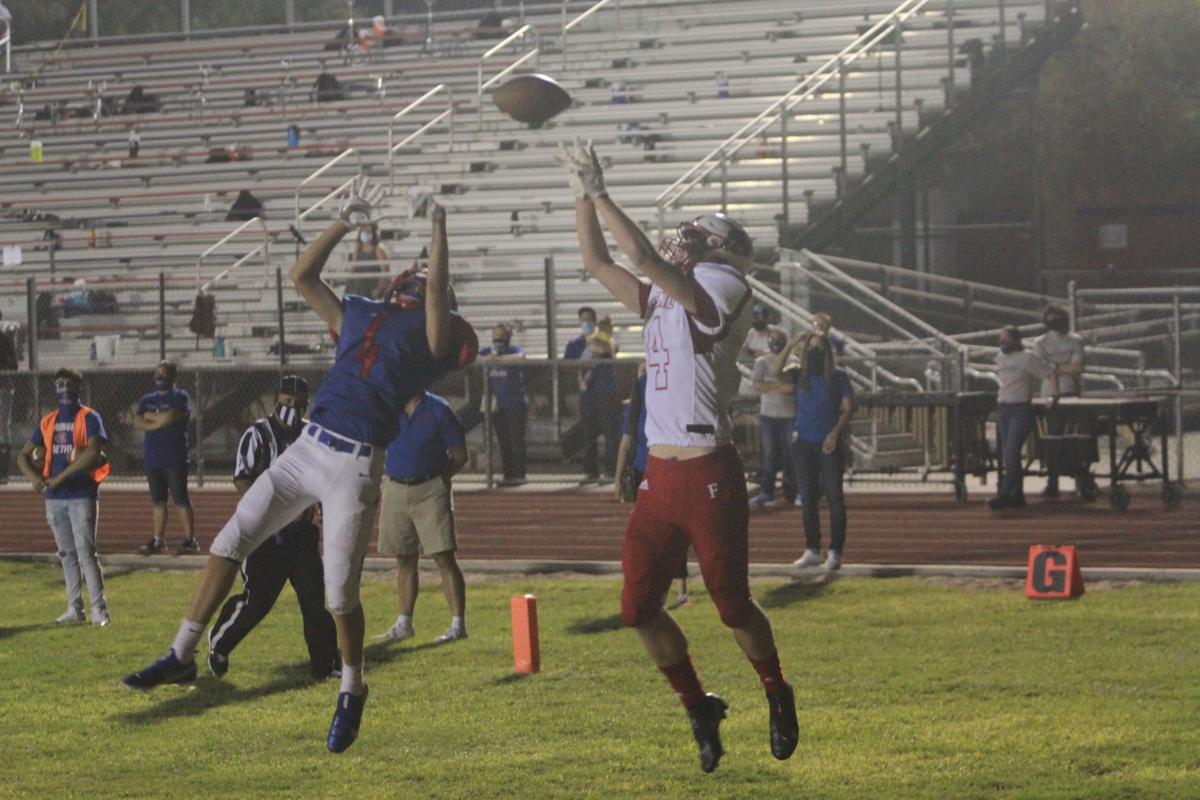 Florence receiver Cade Stenson goes up for a catch against Coolidge on Friday in Coolidge.

Coolidge quarterback Jacob Gunter throws a pass against Florence on Friday in Coolidge.

Florence receiver Cade Stenson goes up for a catch against Coolidge on Friday in Coolidge.

COOLIDGE — Jacob Gunter had been waiting for three years for a moment under center. After serving three years as backup to Valentine Rodriguez in Coolidge, he was finally able to win the starting spot after a close offseason competition. Finally on Friday night, it was his time.

He made it worth the wait.

Gunter threw 18-22 for 302 yards and four touchdowns in the air, along with 30 yards and a touchdown on the ground. And what’s more, he did it against the Bears’ main rivals in Florence, leading the way for a thrilling, come-from-behind 47-43 win.

“It was kind of nerve-wrecking at first,” Gunter said. “But after the first play, I just had a feel for it.”

Friday’s game was a dramatic shift in style compared to the matchup a year ago, which was run-heavy. This year was a passing shootout between Gunter and Florence’s Christopher Walter, who three 11-20 for 266 yards and three touchdowns.

Walter had the upper-hand at first, putting his team up early in the first quarter, and not giving it up until the fourth. Florence was able to hold Coolidge’s highly respected running game at bay for much of the game. Nothing came easy for Bears star Greg Rodriguez, but eventually he broke through the defense and tallied up 146 rushing yards and a touchdown.

The Gophers got on the board first, as Walter found Josh McEvoy for a 32-yard touchdown. But the Bears quickly hit back with Gunter making the short pass to Tad Lynch, who then made Florence defenders pay for trying to tackle him, all the way 27-yard touchdown to tie the game.

Not to be deterred, Walter completed a 33-yard pass to Isaac Sandoval to get the Gophers back into the red zone. McEvoy finished the job, getting a 1-yard rushing touchdown to regain the lead.

In what seemed like a blink of an eye, Coolidge again answered right back. Gunter this time found Connor Ferguson up the middle, and the junior ran the rest of the way for a 40-yard touchdown. However, a blocked extra point meant the lead stayed with Florence.

After that was the game’s first series of stops, including a crucial forced fumble by Coolidge as the Gophers were only one yard away from opening up a big lead as the first half came to a close.

“We would have buried them. They would have been done,” said Florence coach Scott Howard. “But we didn’t. We let them live and they got us.”

The Gophers did start the second half strong. After a drive full of penalties, Walter completed a good fade pass to Cade Stenson for a touchdown to give Florence some breathing room at 28-13.

Then, the Bears really got going. It started with another touchdown for Lynch, who brought in a 23-yard touchdown catch despite pass interference being called against the defense. Coolidge then recovered a fumble on the kickoff and quickly scored on Gunter’s lone rushing touchdown to bring the Bears within two.

Now in the fourth quarter, Gunter executed a play-action that seemed to confuse the Florence defense and allowed Connor Ferguson to be wide open for the touchdown, giving the Bears their first lead of the game.

Florence didn’t go away lightly, though. Another fade route gave Stenson his second touchdown of the game, and the Gopher re-took a 3-point lead with 5:37 left in the game.

Finally, Rodriguez put his stamp on the game, sweeping around the Florence defense for a 16-yard touchdown that proved to be the difference. On the ensuing drive, Florence tried to run a trick play, but Ferguson saw it coming and picked off a wide receiver’s throw. He then ran 52 yards on his own to give Coolidge a 47-36 lead with 1:18 left.

Because it couldn’t end that easy for the Bears, Walter managed to get off a 70-yard touchdown pass to Isaac Sandoval with 17 seconds left. However, they weren’t able to recover an onside kick, and the game was over.

“I need to step it up a little bit,” Schenks said. “Maybe I allowed too much fluff this summer, and I didn’t stick enough to our discipline.”

As for Florence, this adds another heartbreaking loss two a recent history filled with them. Howard said the team will be looking back on its poor tackling and botched coverage to realize how the game got away from them.

“We have to play hard for four quarters,” Howard said. “We’re still working on that.”