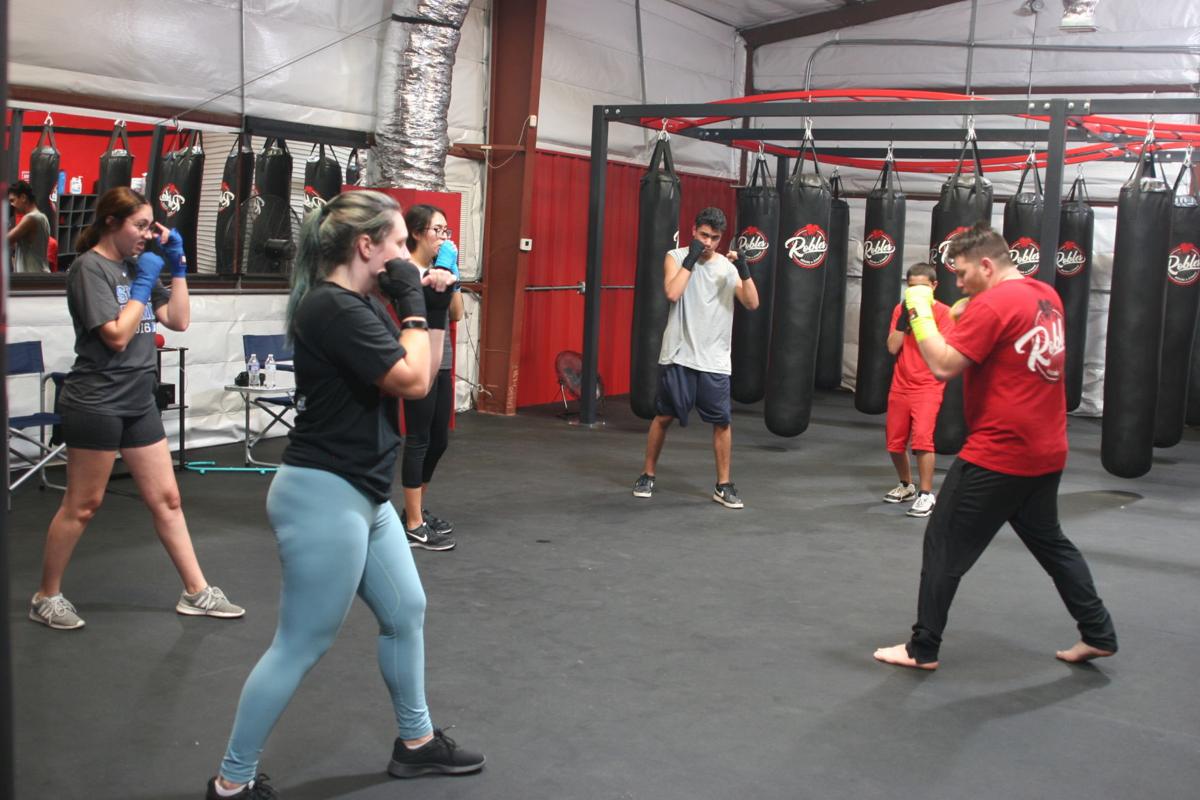 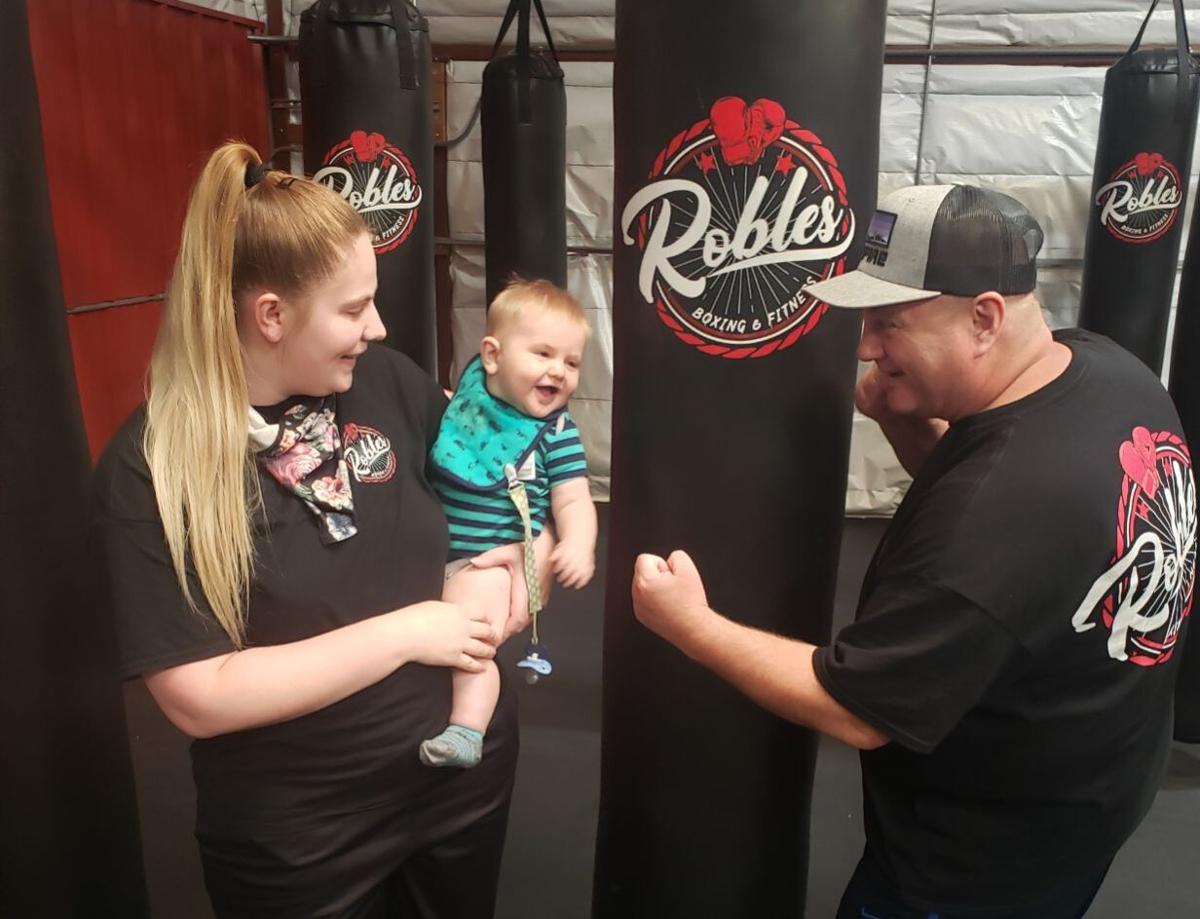 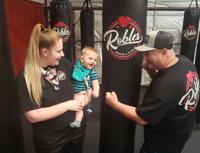 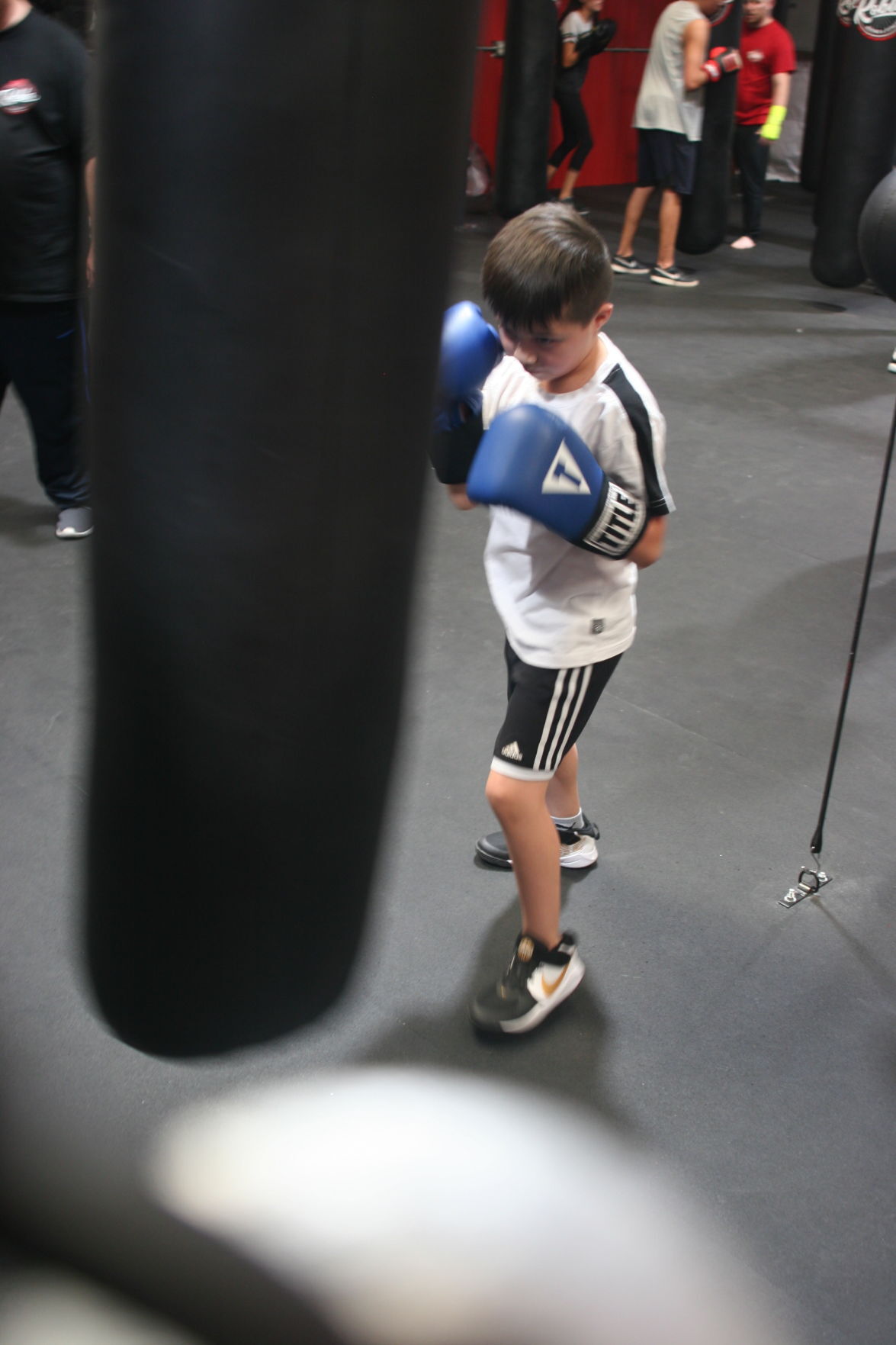 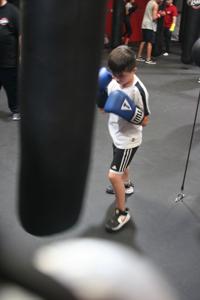 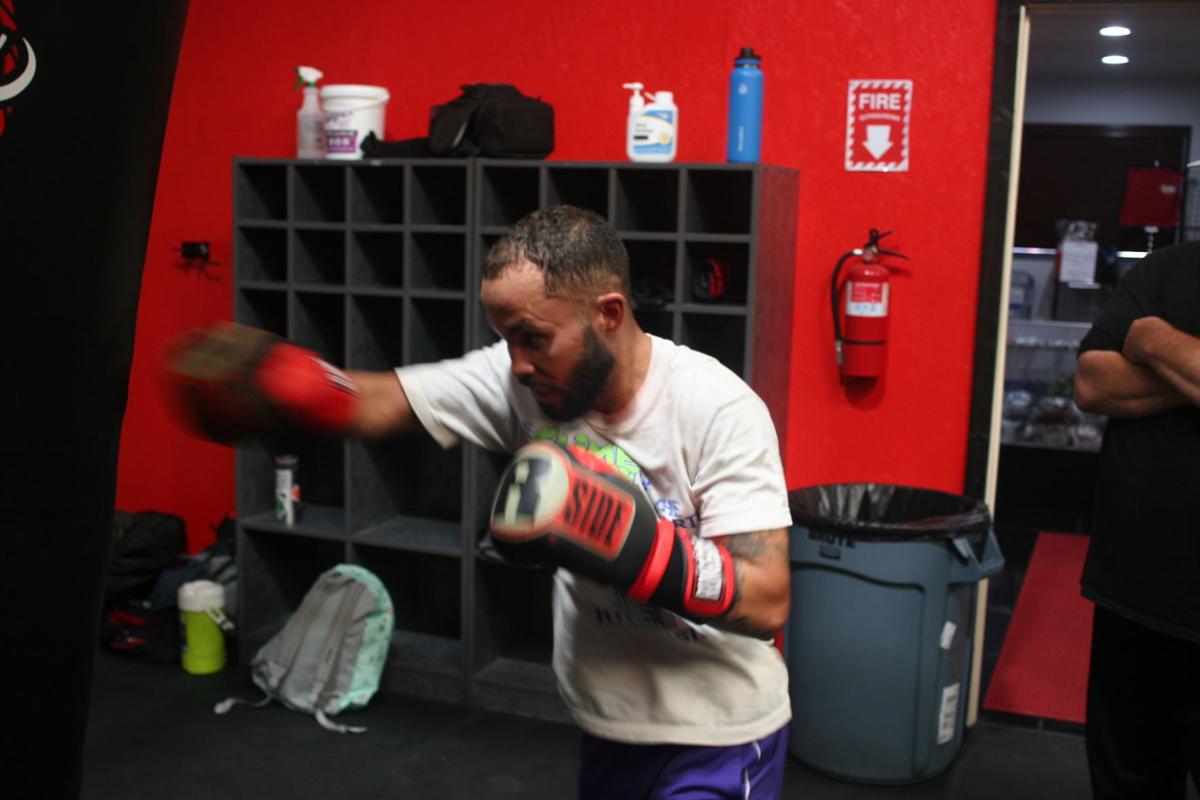 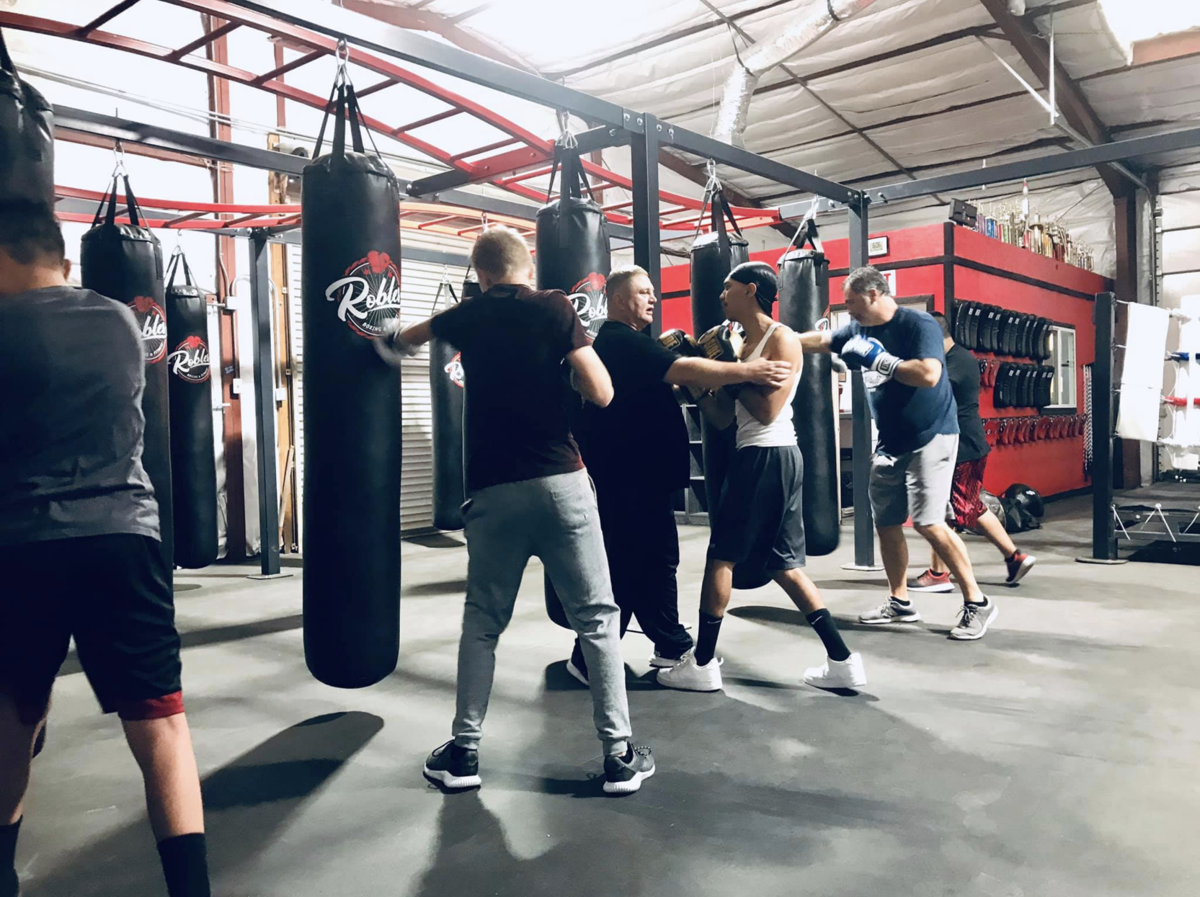 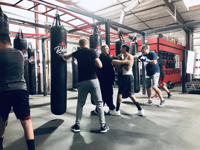 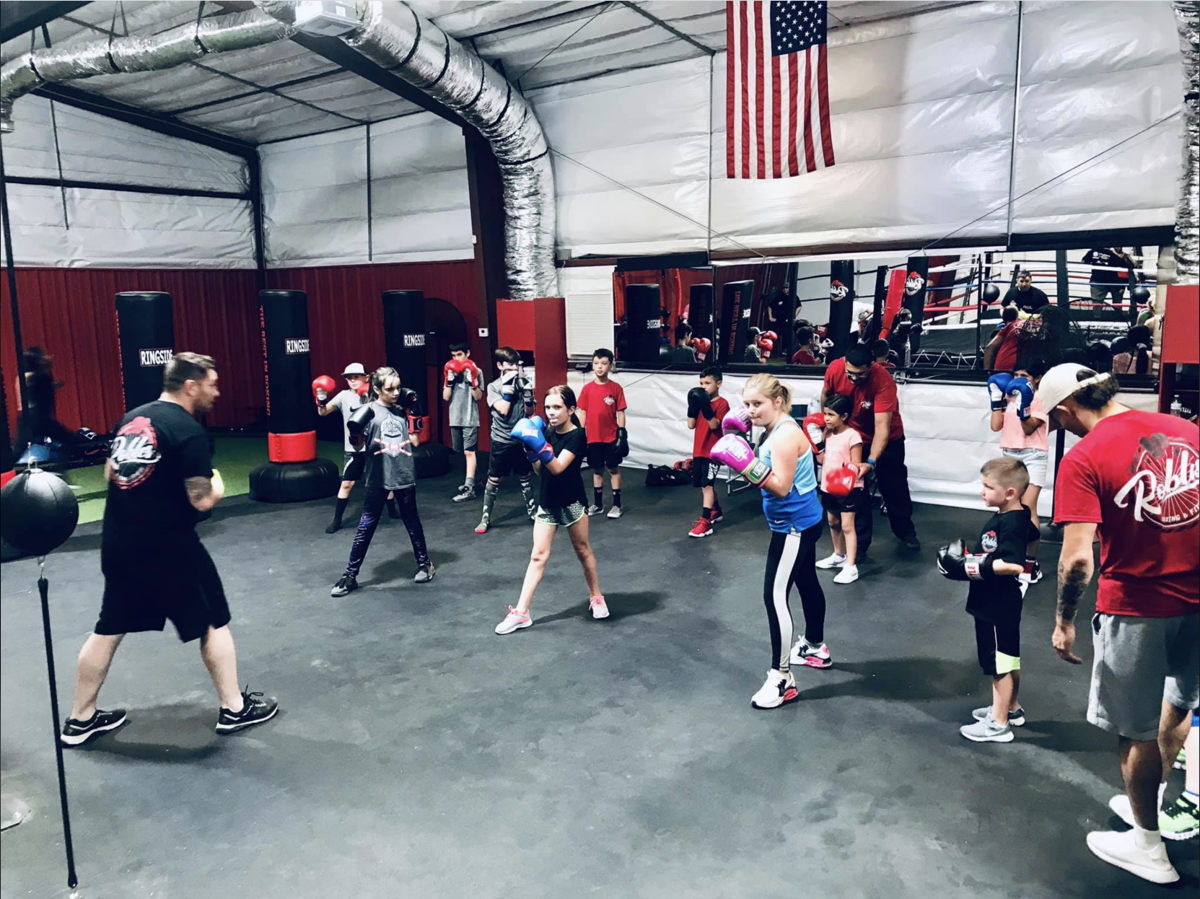 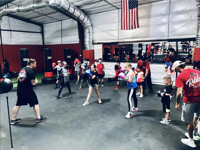 COOLIDGE — At 9 years old, Jonathan Palma is learning how to manage his aggression. He and his mom, Mikki Sanchez, make regular trips from the Florence area to Coolidge so he can work out and get fit.

Jonathan’s sessions are of a physical nature, not emotional. He’s learning how to box at Robles Boxing & Fitness, which completed a move from Florence to Coolidge and opened to the public Aug. 17.

But Jonathan does experience a range of emotions while participating in the program.

“It’s good and it’s a little bit of aggression,” he said before a workout at the facility last week. “It makes me feel good, toughens me up. I get a lot of enjoyment. (I feel) a little bit nervous, a little bit shyness. I have to fight in front of a bunch of people. But you get used to it after a while.”

In six organized bouts since he started with Robles, Jonathan has won once while two of the losses were close fights, said his mother, who lives in the Magic Ranch subdivision of Florence.

“I love it,” she said of watching her son trade punches in the ring. “That’s what he wanted to do from the first time he saw it. That’s why we put him into it. He lives and breathes boxing. I get excited and hopeful for him but at the same time nervous. I want him to win, of course.”

With only one year of boxing experience, Jonathan is competing and training against youths with more fights under their belt while at the same time some of those same guys are showing him the ropes of the sport.

“He’s going against kids who’ve been fighting for four, five years,” Mikki said. “He’s only got one year. He got in late in the game. I think it’s motivated him to train more. He’s like a little brother to them. They push him to be better.”

Randy Robles and his wife, Julie, moved their boxing and fitness training business from Florence to Coolidge this year mainly because a bigger facility became available. Randy had been working at the Speedway convenience store when he saw a nearby building at 640 N. Arizona Blvd. with a for rent sign planted in the ground. And, besides, operations in Florence had hit a rough round after about 18 months.

Robles had been conducting his training sessions in a pecan orchard, a school’s field and at the Florence Community Center, but space was cramped and equipment limited.

“We outgrew it. We’re appreciative they allowed us to use their facility, but it was hard because we were limited to two days, certain hours. We only had a little bit of equipment, four bags,” Julie Robles said. “Some days we’d have two rooms, some days we’d have one room. Couldn’t have a boxing ring. It just got too hard.”

So the 3,000-square-foot building in Coolidge that formerly was an auto shop fit the Robleses like a glove.

“Coming to Coolidge just opened up doors,” Randy said. “It was so much easier to open our business here. The town council, the mayor, the Chamber of Commerce, they all reached out to us. We were right there in the heart of Florence. Mayor never showed up, Town Council never showed up. Privately they weren’t helping us. And we didn’t need anything. Just don’t put up so many roadblocks. We’re a small, mom-and-pop gym and we can’t afford $100,000 to fix up a building. Coming to Coolidge was night and day. (On our first day) I saw so many kids in here. We tripled the amount we had (in Florence.) It wasn’t like we hated Florence. It’s just that we got to grow. We either fold or we advance.”

Robles, a former amateur and 1980 and 1984 Olympics hopeful with more than 400 fights to his credit, runs a training center that features “old-fashioned, traditional boxing” as well as kickboxing and Zumba classes — but not mixed martial arts, cage fighting or wrestling, real or staged — for boys and girls, men and women anywhere from 6 years old to clients in their 80s.

A slate of 50 classes, including a trainer, costs $65 for one month. It’s not a come-and-go-as-you-please fitness center as with most national-brand gyms. Rather, workouts are scheduled. An average client will attend three classes a week, but others go multiple times a day all week long.

“We don’t have cardio and weight equipment,” Julie said. “We’re not an open gym where you can come in and work out when you want. Everything is structured. You’re never going to come in and say ‘Hmm, what am I going to do today?’ You’re always going to know what to do.”

Most of the focus is on the youth end, and it’s not all about delivering and taking a punch. There’s subtlety at play and a demand that the youngsters pay as much attention to schoolwork as their ring work.

“The girls who come in, they got a point to prove,” Randy Robles said. “But we also reach out to the kids that are shy, overweight. They’re not the strongest. They may not get bullied at school but they just don’t fit in with the football team. We get those kids as well. We get the tough kids and we get the shy kids. We don’t really get the ones who are in the middle, those who were good at Little League and they’re just hanging out here. It’s either you’re a tough kid or you’re not, and we try to bring them together.”

Just as important as the physical training is the camaraderie that develops among the boxers, especially the girls, Randy said.

“It’s confidence-building,” he said. “Most of them are kids that don’t fit into school sports. It’s individual, but they gravitate to each other. We have four girls that we’re getting from different schools and they came here and now they’re friends. They’re going to pizza parties. That’s what I like. It’s more about getting the kids together, building that self-confidence. They don’t compete. They don’t get punched at. We’re not that kind of place. We do offer that, but you don’t just walk in and spar.”

The Robleses foresee their gym and fighters eventually representing the Coolidge community much in the manner the Coolidge Bears do on Friday nights by hosting fight nights and out-of-town boxers. There is a amateur team now, and some pro fighters as well, that carried over from Florence going to tournaments in Tucson, Phoenix and out of state carrying the Robles name. While operating out of Florence, they twice held cards with as many as 18 bouts.

“For those that are actually looking to compete in the sport of boxing, we have steps that they have to take and then they can actually make our amateur boxing team. We do have some pro fighters as well,” Randy said. “We do put on events. When they lift the sanctions for COVID we’ll be holding events here. We’ll do school drives. We’ll do toy drives. We’ll do a lot of things with the community. We’re not just a gym. We like to interact with the community.

Among the most experienced of boxers associated with Robles Boxing & Fitness is Puerto Rico-born, New York-raised Edriech “Kid Flash” Rosa, 24, who’s undefeated in four pro fights and has three knockouts in the super flyweight division, according to boxrec.com. Rosa, a Florence resident, has an upcoming fight that will be televised on ESPN, Robles said.