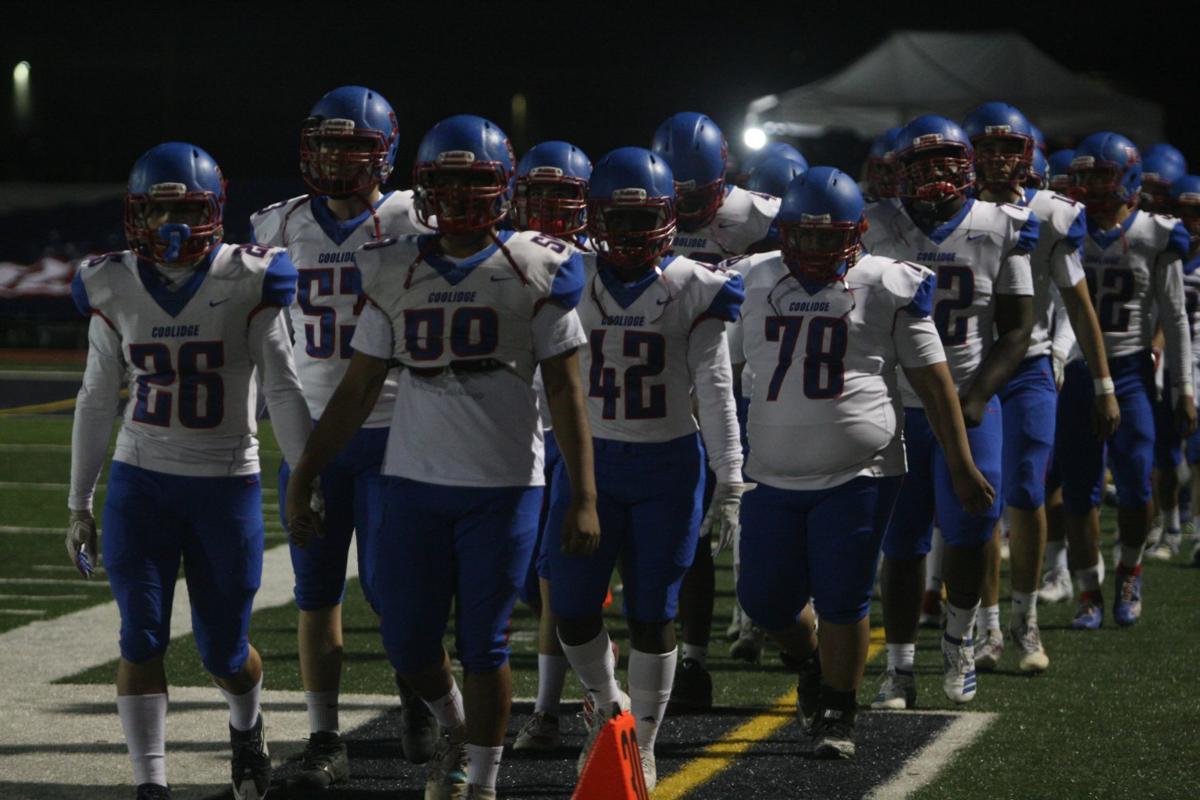 The Coolidge Bears walk onto the field at American Leadership Academy-Queen Creek hand in hand for their regular season finale last Friday. 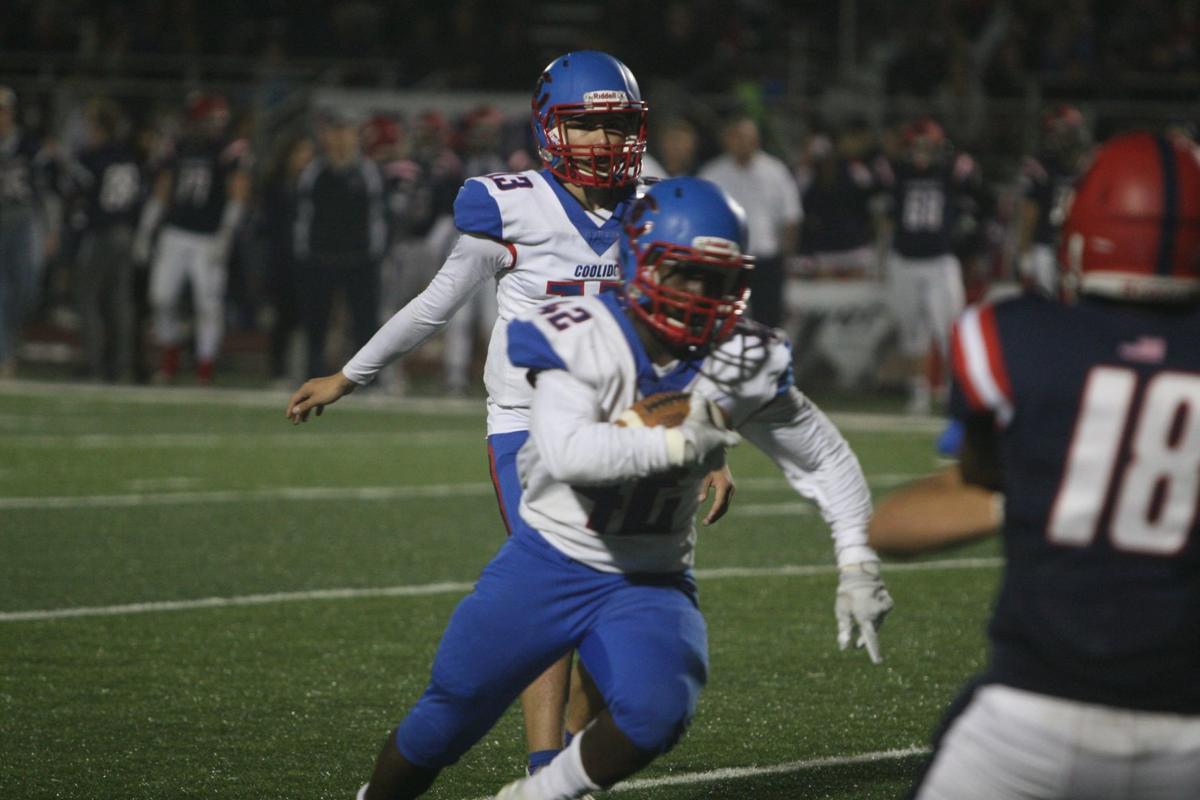 Coolidge running back Comar Jeffries tries to find a gap in the American Leadership Academy-Queen Creek defense on Friday night.

The Coolidge Bears walk onto the field at American Leadership Academy-Queen Creek hand in hand for their regular season finale last Friday.

Coolidge running back Comar Jeffries tries to find a gap in the American Leadership Academy-Queen Creek defense on Friday night.

QUEEN CREEK — The Coolidge Bears might have entered their regular-season finale on Friday night already with the most wins they’ve had since 2014, but they’re still going to have to re-group for next week’s playoffs after being run out of the stadium.

The Bears (8-2, 3-2 in 3A Central) might have had extra hope for the game after Florence beat top-ranked American Leadership Academy-Queen Creek (9-1, 4-1 in 3A Central) last week, and indeed they kept it close early in the game. However, the Patriots were out to show that defeat was just a fluke, dominating both sides of the ball to shut out Coolidge 55-0.

The game actually remained close through the first quarter, as the Bears limited the production of the multi-faceted ALA offense. However, they weren’t able to get much going at all on offense, and eventually the dam was broken and the Patriots were able to pull away the rest of the game.

Perhaps more troubling for the Bears is how they are losing skill players to injury on a regular basis now. After speedy receiver Greg Reece suffered a broken leg earlier in the season, lead running back Greg Rodriguez injured his collar bone last week and won’t be back for the rest of the season. Then in this game, receiver Tyler Tolley left with an apparent leg injury.

“On offense we had stuff we just didn’t execute, and that’s either cutting in the right hole or catching the football, even though the kids played hard,” said Coolidge coach Rodger Schenks. “We’re playing some young kids now at some of the skill positions because they’re replacing kids who got hurt. So this is new to them.”

This was the first time the Bears have played a pass-heavy offense all season, with senior Patriots quarterback Rand Jensen having put together one of the top seasons at the position in 3A. Coolidge represented itself well on that front though, holding him to what for him was a below-average night, completing 14 of 23 for 249 yards and three touchdowns. Most impressive, they were able to intercept him twice, matching Jensen’s season total before Friday.

His first touchdown, coming late in the first quarter, was the most impressive as he tossed it deep to the back of the end zone, where Carter Taylor made an incredible leaping catch when he somehow kept a foot in bounds. Taylor finished with a game-high 153 yards receiving, followed by Easton Lunt with 75 yards and Ethen Cluff with 65.

The story of the night, though, was the Bears’ inability to move the ball consistently. With Greg Rodriguez out, it was up to Comar Jeffries and his power style of running to carry much of the load. The Patriots were able to plug up the gaps all night, though, limiting him to 64 yards on 19 carries.

Quarterback Valentine Rodriguez spent much of the night fleeing the ALA pass rush, and when he was actually able to get the ball away, he wasn’t helped much by several drops. He finished the night 7 of 21 with two interceptions, though he added 51 yards on the ground.

Twice the Bears were able to get to the Patriots’ 5-yard line, but they weren’t able to finish off either drive and they were shut out for the first time this season.

Now they must wait until the next day to see what effect this loss has on their 3A ranking heading into the postseason. With an opponent the quality of ALA-Queen Creek, it is unlikely to hurt them too much, as they just need to stay in the top eight to ensure a home playoff game.

As for when they get there, Schenks doesn’t think Friday night’s result will harm their confidence.

“What we’ve done all year is show up the next day ready to work,” Schenks said. “So we’ll bring our lunch pale and get after it. There’s nothing they can do to fix this game, so all we can do is get better from it.”