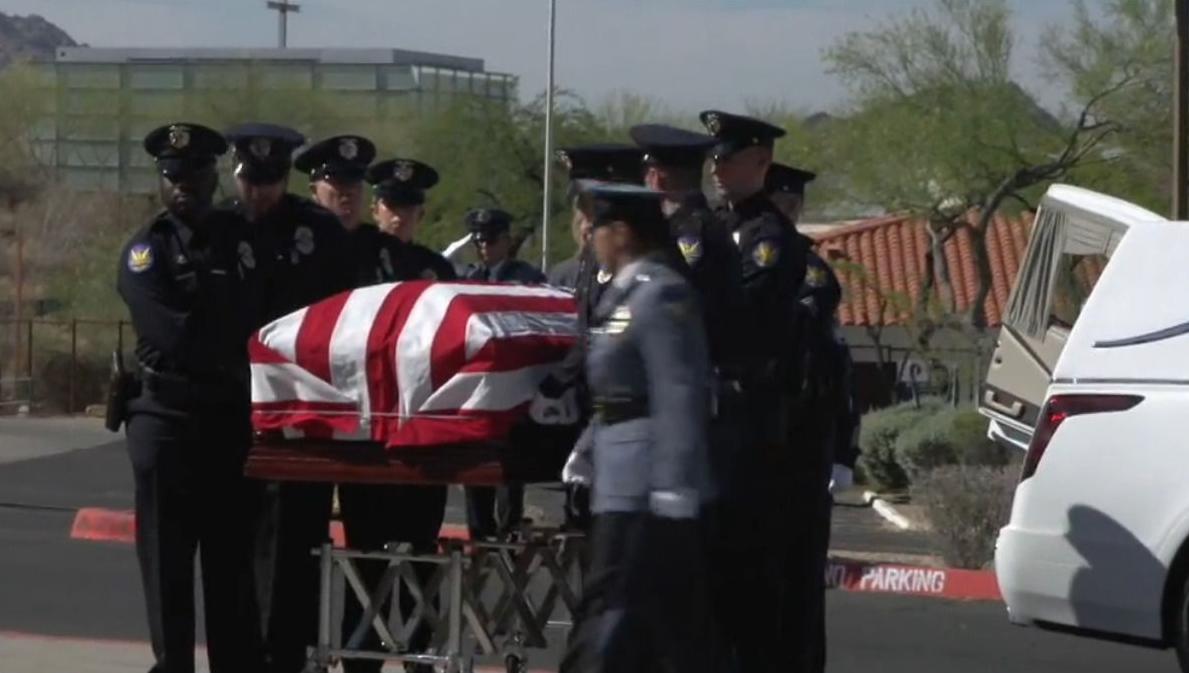 Family, friends and fellow officers filled Dream City Church in Phoenix on Thursday to remember Ginarro New, who died May 31 when his patrol car collided with another vehicle whose driver authorities say ran a red light.

PHOENIX — The wife of fallen Phoenix police Officer Ginarro New said she understood the risk of having a husband in law enforcement, but despite her grief, she would not change anything.

“It feels unfair that we didn’t get to do as many things as we wanted to do, so many milestones we never got to get to,” Kristen New told dozens of mourners. “But I would relive the time I had with him a thousand times over because he was my soulmate.”

Family, friends and fellow officers filled Dream City Church in Phoenix on Thursday to remember New, who died May 31 when his patrol car collided with another vehicle whose driver authorities say ran a red light. The other driver, a 30-year-old man, also died.

New, 27, a graduate of Coolidge High School, joined the department in July 2019, just a few months before he got married. At his graduation, Police Chief Jeri Williams recalled being “struck by the poise and confidence he possessed as a brand new officer.”

“By all accounts, he was on his way to a very successful career,” Williams said, choking up at times.

Officers in his precinct, his commanding officer and a former field training officer spoke of his compassion, integrity and work ethic. He found police work to be the best fit after a career path that included stints as a member of the U.S. Marine Corps, a school nurse and an EMT.

Out of uniform, “Gino” loved spending time with family and being the “fun uncle” to his nieces and nephews. He was also was a pop culture nerd who loved “Star Wars” and comic books.

“Today is the easy part,” Kristen New said. “The hardest part is living the rest of our lives with this loss.”

After the service, New received full police honors in the church courtyard.

Besides his wife, he is survived by his mother, brother and grandmother.