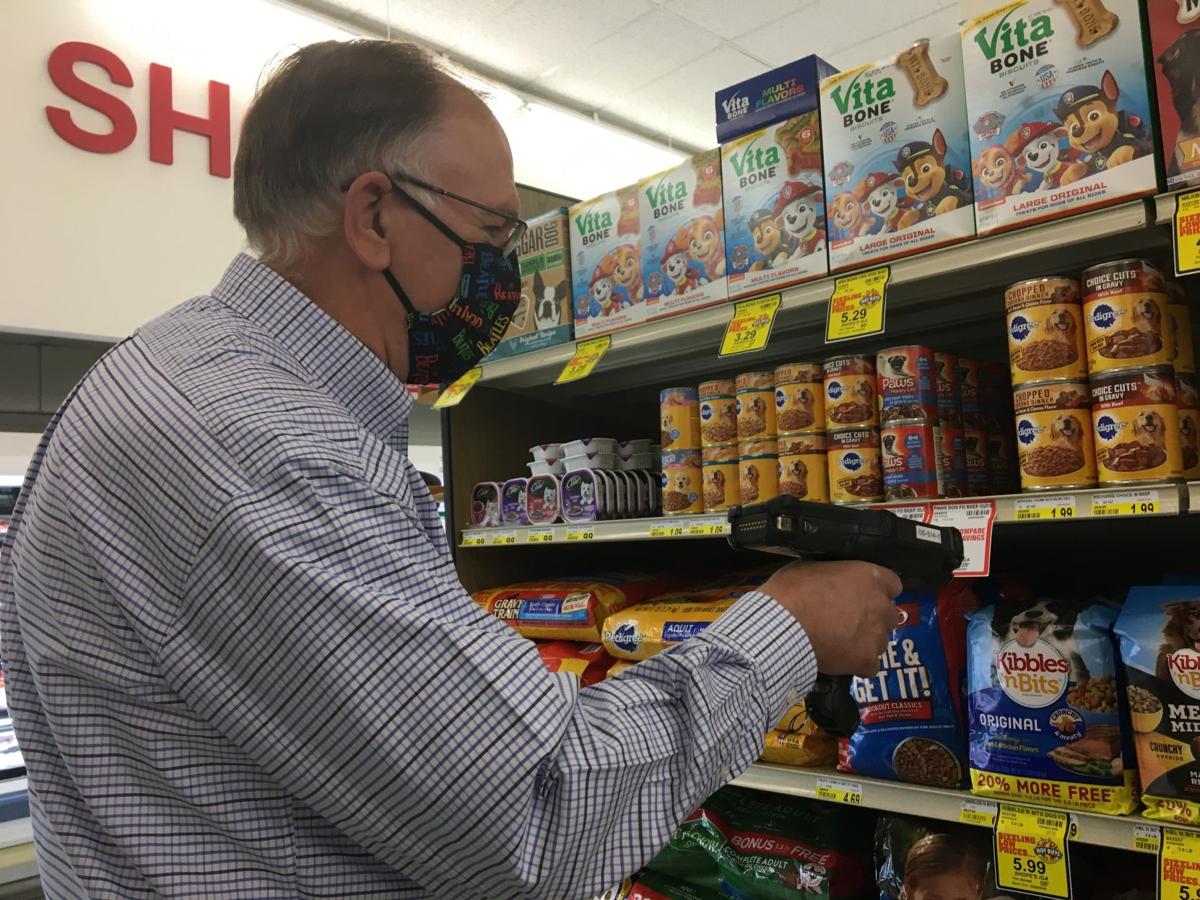 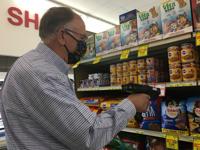 Shope’s IGA owner Tom Shope works on an order for dog food and other items for the grocery store — one he is uncertain will be delivered in full amidst rations warehouses have imposed during the coronavirus outbreak. The rations were sparked by the early onset of panic purchases made by some shoppers. 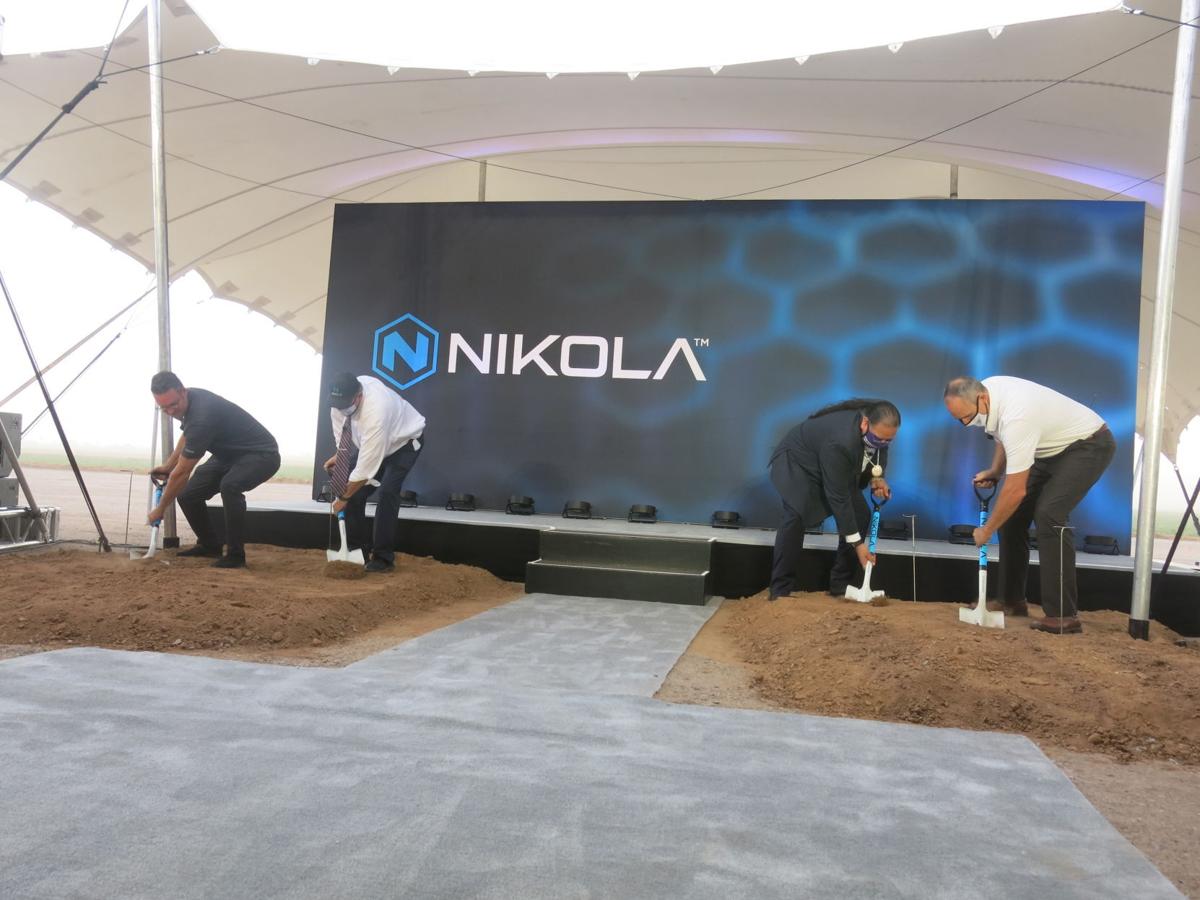 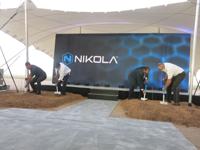 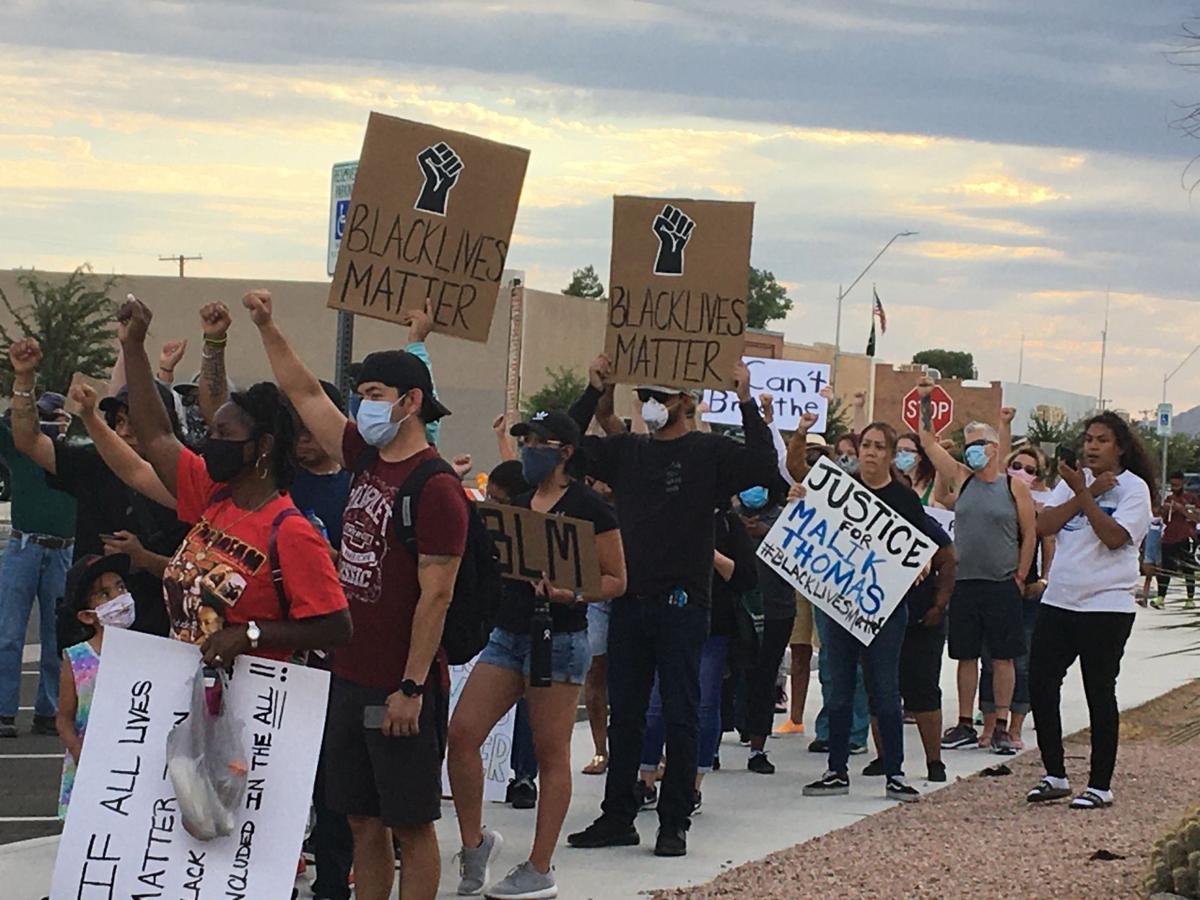 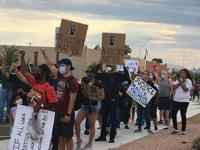 Shope’s IGA owner Tom Shope works on an order for dog food and other items for the grocery store — one he is uncertain will be delivered in full amidst rations warehouses have imposed during the coronavirus outbreak. The rations were sparked by the early onset of panic purchases made by some shoppers.

What else could it be? Never in recent times has there been a story that resonated so strongly for so long, dominating government affairs and everyday lives at the same time. Indeed, many of the entries on this list will feature the virus as a major influence.

The arrival of COVID-19 into the city almost immediately ground everything into a halt. In what turned out to be the optimistic estimate of the century, it was originally thought that this would last a couple weeks, and yet here we are more than nine months later still trying to cope with the virus’s many effects on society.

In Coolidge, that meant sending kids home for virtual learning in March and not coming back to classrooms until October. Even then, everything was on a razor’s edge as the school district tried to prevent outbreaks from shutting in-person learning down again. But like everywhere else, those outbreaks still happened, first among high school administration, then staff and students.

The Coolidge business community, hardly thriving in the first place, took some huge hits as the virus forced many to shut down while keeping customers at home even when they were open. Commerce shifted even more online than normal, hurting mom-and-pop operations. Even with some relief coming from the government, more hope is needed.

In sports, teams in the spring didn’t get the opportunity to show what they were capable of, as their seasons were canceled. This included a softball team that had the potential to make a deep playoff run. When football finally started in October, Coolidge had a promising team, but when numerous starters had to quarantine the final two weeks of the season, everything derailed.

While few would have predicted that Coolidge would still be waiting for life to return to normal going into 2021, the year did end with hope of a vaccine on the horizon.

2. Nikola progresses, only to fall

Back in August, things were looking great for the prospects of Coolidge’s biggest economic development project in recent memory. Nikola Motors announced a partnership with General Motors that brought even more capital into the electric vehicle company. Lots of new products had been announced, and there was even a groundbreaking ceremony on the site in the southern portion of the city.

And yet, it was noted that the project that was initially pitched as ready to go when it was announced as coming to Coolidge in 2018, still hadn’t produced any product or built any part of its factory. This was odd considering the big reason cited as coming to Coolidge was because the city was prepared to get the ball rolling right away.

Then things started to fall apart. A report released by a firm intent on shorting Nikola’s stock described Nikola as an “intricate fraud” and lobbed a number of allegations at the hydrogen electric and electric vehicle manufacturer, including that the company’s prototype of the Nikola One semi-truck was a pusher, or not able to drive on its own.

Nikola issued a press release on Monday calling the report “false and defamatory” and alleging that Hindenburg Research was “financially motivated” to manipulate the market and profit from a dramatic drop in Nikola’s stock price.

Though Nikola zeroed in on a number of statements included within the report that the company described as “false and misleading,” the company did not deny that a 2017 video of the Nikola One prototype was staged.

In the aftermath of the report's release, Nikola's stocks plunged, its eccentric CEO Trevor Milton resigned and GM backed out of its partnership. Despite all this, both the company and the city say the manufacturing plant is still on schedule to be built in Coolidge.

A couple of 20-year-old Coolidge residents are experiencing the year of their young lives in 2020 and soon will be making some very mature decisions affecting and shaping their community.

Eric Daniels was elected Aug. 4 and became Coolidge’s youngest city councilman and the state’s youngest active elected official when was sworn in Nov. 23.

Then for the Coolidge Unified School District, Diana Guerrero will join the Governing Board at the Jan. 13 induction ceremony. She was one of three candidates running for three seats in the Nov. 3 election, after Adriana Saavedra told PinalCentral she was no longer interested. Guerrero is also the only candidate who is not a write-in.

Both teens attended kindergarten through high school in Coolidge, graduated in 2019, are college students while also working part time, and each turned 20 years old at almost the same time — Guerrero on Nov. 29 and Daniels the following day. Each was a high achiever at CHS, participated in student council and served on the Coolidge Youth Council. Each also had aspirations of post-high school public service that will become realities in the coming weeks and months.

The other winners in the city council race were incumbents Jacque Hendrie-Henry and Steve Hudson, along with Mayor Jon Thompson. Linda Heath and Kris Gillespie won the other CUSD board seats.

Bryan Shaw was sentenced to spend the remainder of his natural life plus 7.5 years in prison for the 2012 murder of his estranged wife.

After less than a full day of deliberation, a Pinal County jury found Shaw guilty March 6 of the premeditated first-degree murder of his estranged wife, Denise Padilla-Shaw.

Shaw was charged with killing her on Aug. 26, 2012. He was accused by prosecutors of shooting her in the face and beating her lover Leslie Castillo with a baseball bat early that morning in Coolidge.

Padilla-Shaw’s body was found the following day by Pinal County Sheriff’s deputies wrapped in a blanket and left in the Picacho Reservoir area south of Coolidge.

On an overcast Friday evening, chants for peace and justice rang outside of Coolidge City Hall as about 100 peaceful demonstrators gathered to protest police brutality.

Coolidge locals Bettina Jackson and Frankie Felix organized the protest to stand in solidarity with other demonstrations in cities around the United States and the world, sparked by the death of George Floyd.

Floyd died in police custody on May 25 after a Minneapolis police officer knelt on his neck for nearly nine minutes. The officer, Derek Chauvin, has been charged with second-degree murder. Video of Floyd’s death was captured by onlookers at the scene who were unable to interfere.

“It was heartbreaking to watch,” Jackson said of the footage. “Devastating. And then you think about the people that were there watching it. How did they feel knowing that they couldn’t do anything because they might have been a victim as well? That’s not right. How can you stand and watch someone be murdered because you’re scared to be murdered too? It’s too much.”

Coolidge protesters called for justice not only for Floyd, but also for a number of other individuals who died during interactions with law enforcement officers, such as Dion Johnson in the Valley.

In the past two years, builders of single-family and multifamily housing have reshaped neighborhoods around Coolidge, with the work of Brown Homes and Wade Jurney in subdivisions like McClellan Meadows and Picacho Crossings making the most notable changes.

Other, more established, parts of the city are also witnessing fresh development.

Along streets like Palo Verde Avenue, the changes come in the form of in-fill housing that takes the place of aging homes or vacant lots.

But new builds do so much more than beautify a neighborhood. According to Development Services Director Gilbert Lopez, new residential structures in established neighborhoods tend to benefit more than just the individuals who live there or own the property, they also benefit nearby property owners as well.

With Pinal County set to raise its inmate fees at the start of the new year, the city of Coolidge has reached an agreement with CoreCivic to jail those arrested for misdemeanors at a facility in Florence.

On Oct. 26, the Coolidge City Council approved the contract, which has yet to be finalized but is expected to go into effect before January.

“We thought the county was charging way too much money,” Coolidge Mayor Jon Thompson said. “There’s a world of difference when you start to compare these agreements. CoreCivic’s private general services are far superior to the county’s.”

According to Coolidge City Manager Rick Miller, the city had already approved jailing costs in its budget for the 2020-21 fiscal year when the county revealed the upcoming fee hikes. The county has initiated a four-phased proposal that would see the cost per inmate rise from $72.33 per day to $123 by July 1, 2022.

The Coolidge Bears have their eyes set on returning to the glory days of their boys basketball program, and they believe they have found the man to lead it — the one who previously took the team to the top.

Coolidge has sent ripples around the state basketball scene by hiring Dave Glasgow as their next head coach. That name should sound familiar to longtime residents, as Glasgow coached the Bears to state championships in 1998, 1999 and 2002. These titles, along with a 217-89 overall record and six region titles, led to his induction into the Coolidge High School Hall of Fame in 2016.

He left in 2004 to lead Sierra Vista Buena, where he went 354-121 and won more games than any other coach in southern Arizona during that 16-year period.

Glasgow will replace Bryan Piles, who Principal Ben Armstrong said he did not want to return after two years with the program, including one region championship. Glasgow said he had been thinking about returning to Coolidge for years after being asked by his former players, and when he saw the opening he decided to apply.

The city will be taking over responsibility for Artisan Village of Coolidge’s lease with the Coolidge Unified School District following a 5-0 vote.

According to City Attorney Denis Fitzgibbons, the approval of the item, which was placed on an April City Council agenda, names the city as the assignee of the agreement between the Artisan Village’s parent organization — the Coolidge Performing Arts Center Foundation — and the district.

The option to take over the lease was brought before the council after City Manager Rick Miller received a letter from CPAC Foundation President Mike Henry, declaring that the foundation was having difficulty meeting its lease agreement obligations.

This came after the Artisan Village tore down the controversial Military Honor Park that was established on its campus.

After a lengthy battle between the Coolidge Veterans Commission and Artisan Village of Coolidge that began in January 2018, a jury ruled that the park is moveable. The verdict enabled the CVC to begin removing many items from the park that were initially withheld from the nonprofit veterans organization.

Those items included the original park structure, which was torn down beginning on Jan. 28.

The city of Coolidge has selected a new chief to head up the Coolidge Police Department.

Harry Grizzle was promoted to chief of police on Jan. 9 following the retirement of his predecessor, Jim Malinski.

His background in law enforcement has included everything from serving as an FBI-trained hostage negotiator on the multi-agency SWAT team to serving as interim chief of police for the towns of Kearny, Mammoth, Hayden and Winkelman.

In addition, Grizzle is a graduate of the FBI Academy and a recipient of the Medal of Valor and the Meritorious Service Award.

Now he oversees the entire department, which includes everything from budgeting and staffing to ensuring that officers have access to all the resources they need.