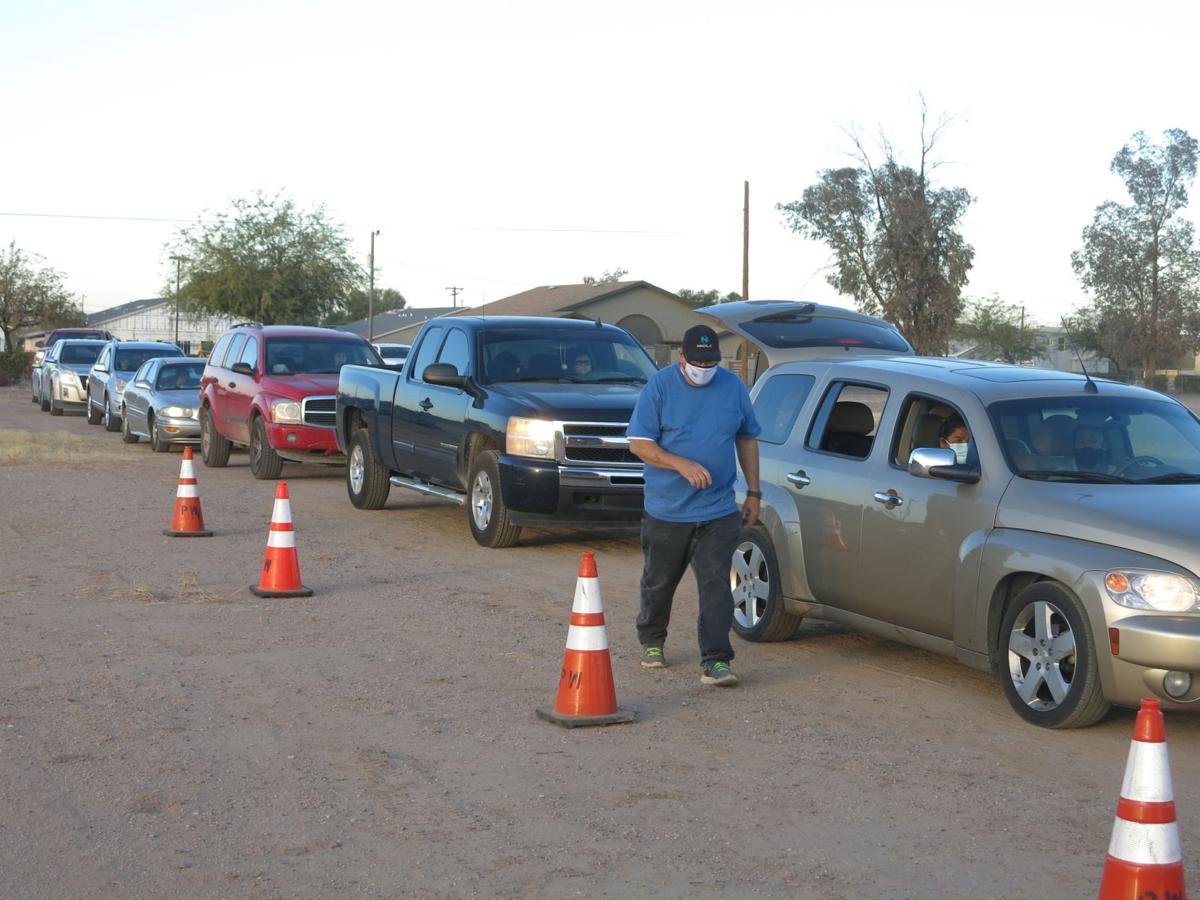 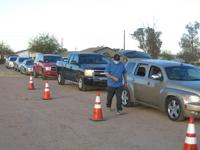 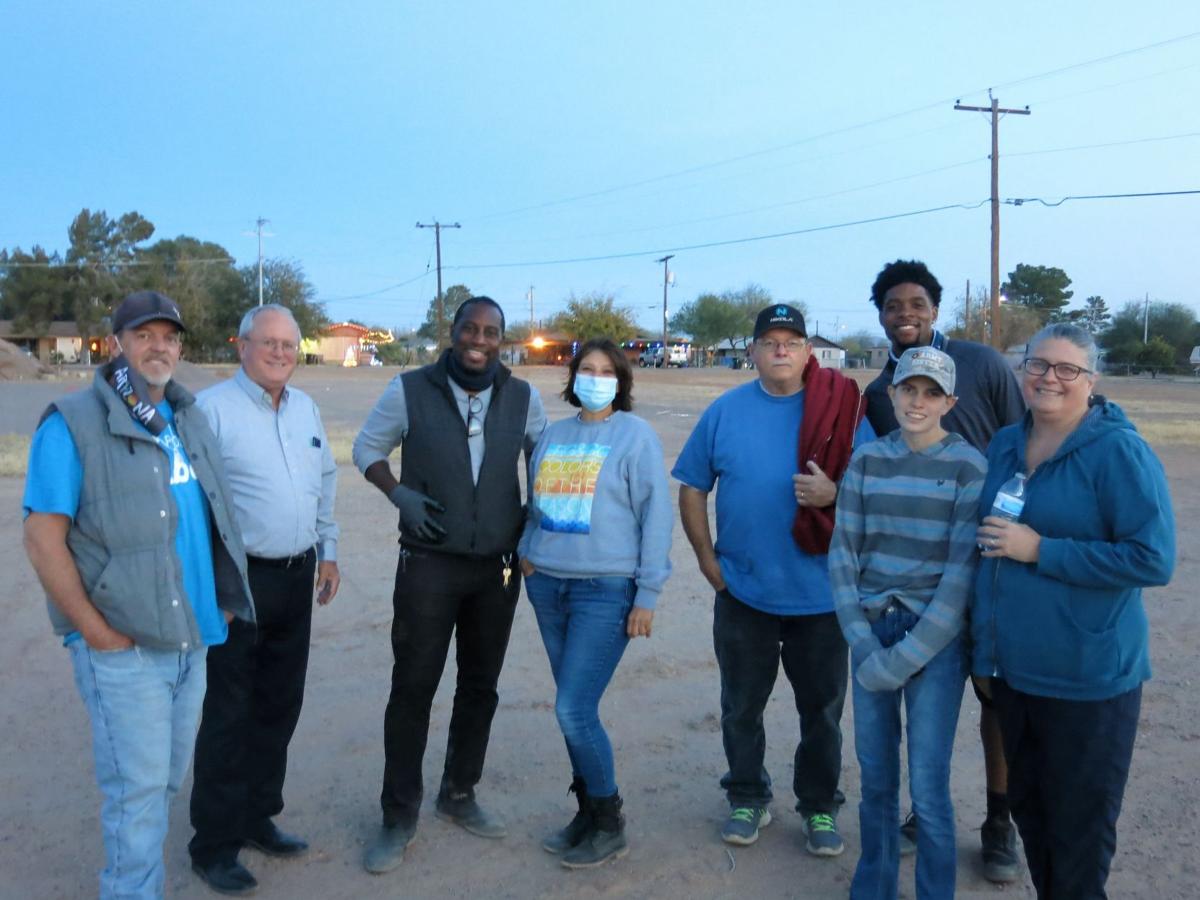 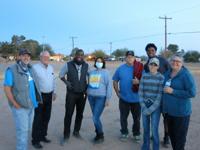 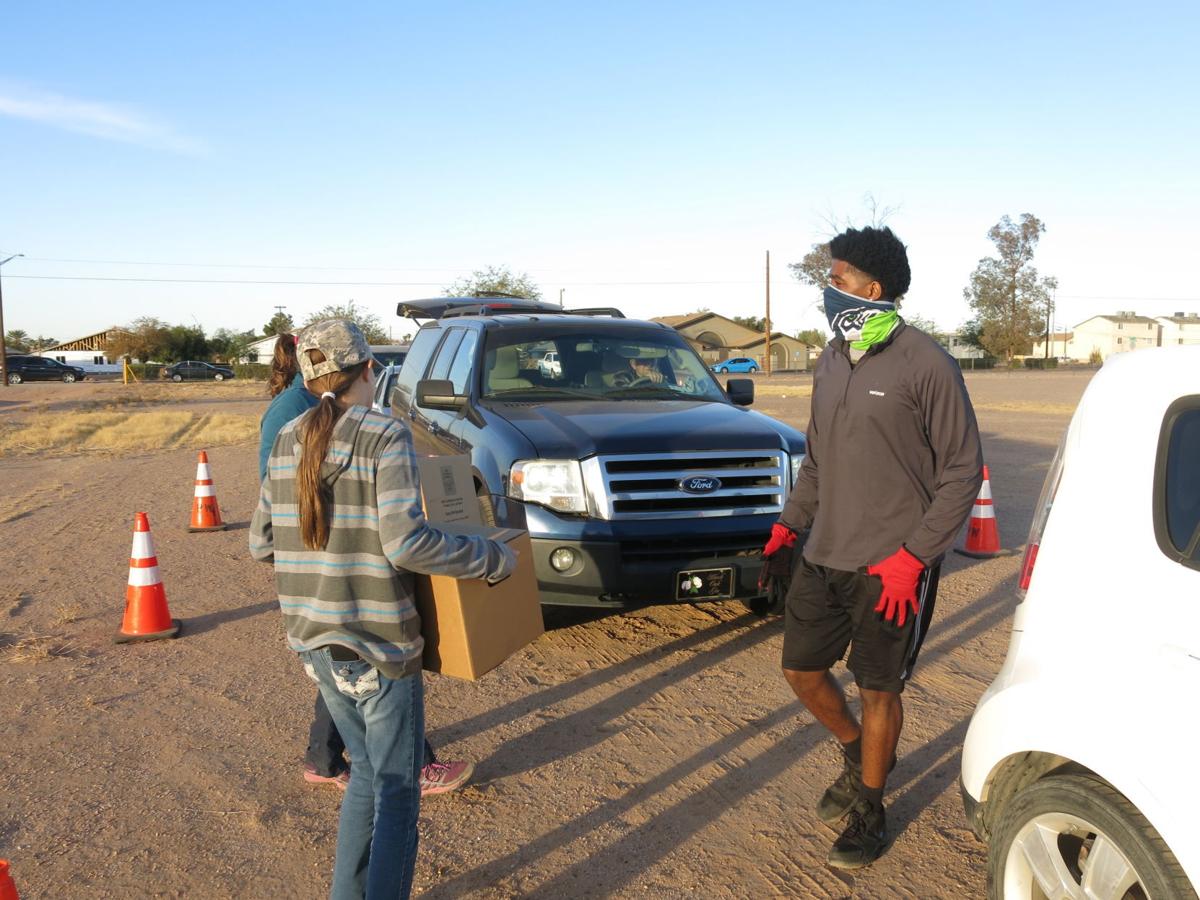 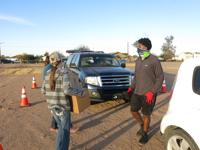 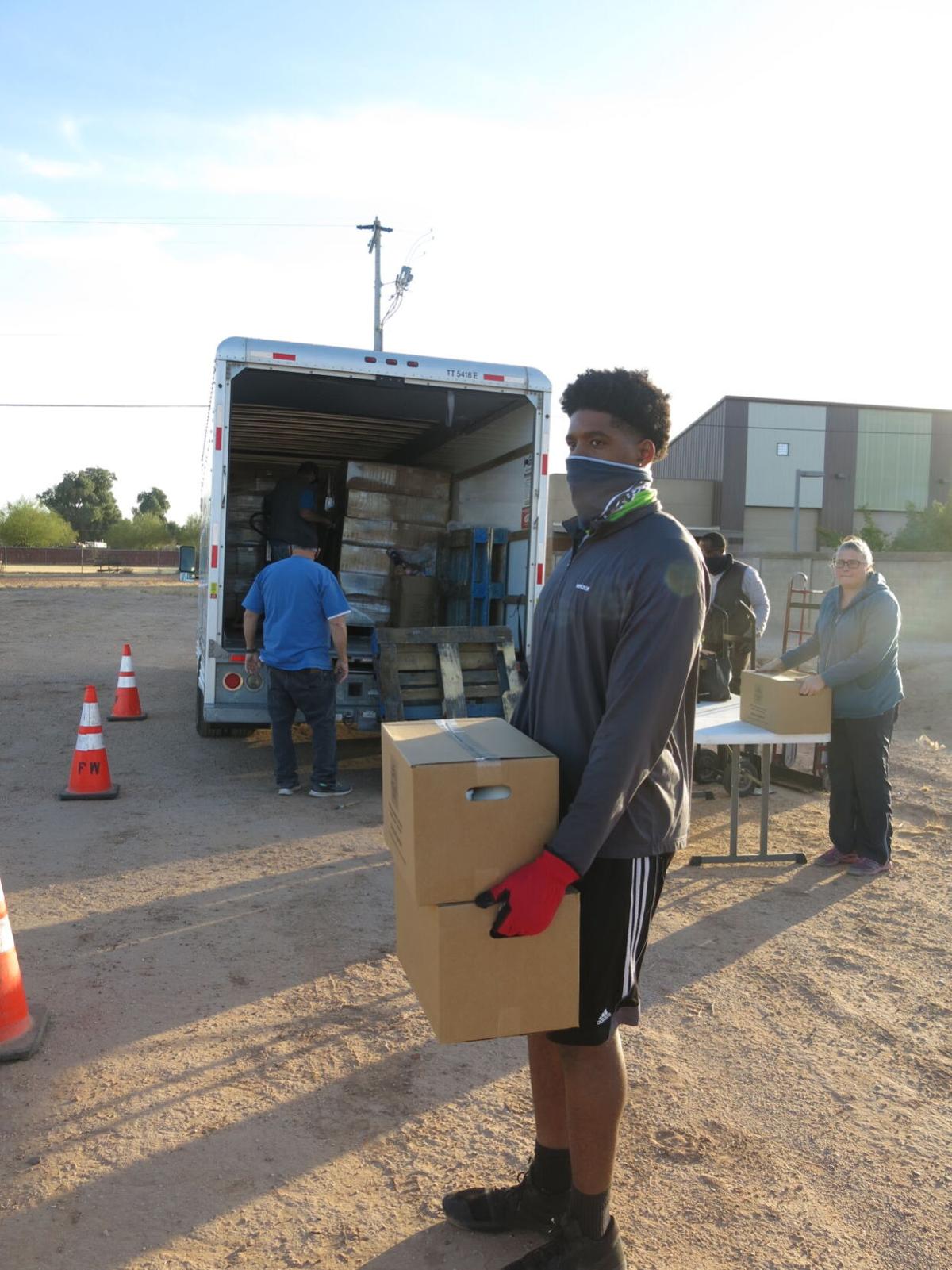 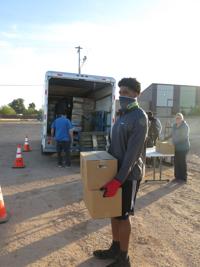 Bernard White Jr. carries food boxes to cars in line at a food drive in Coolidge. 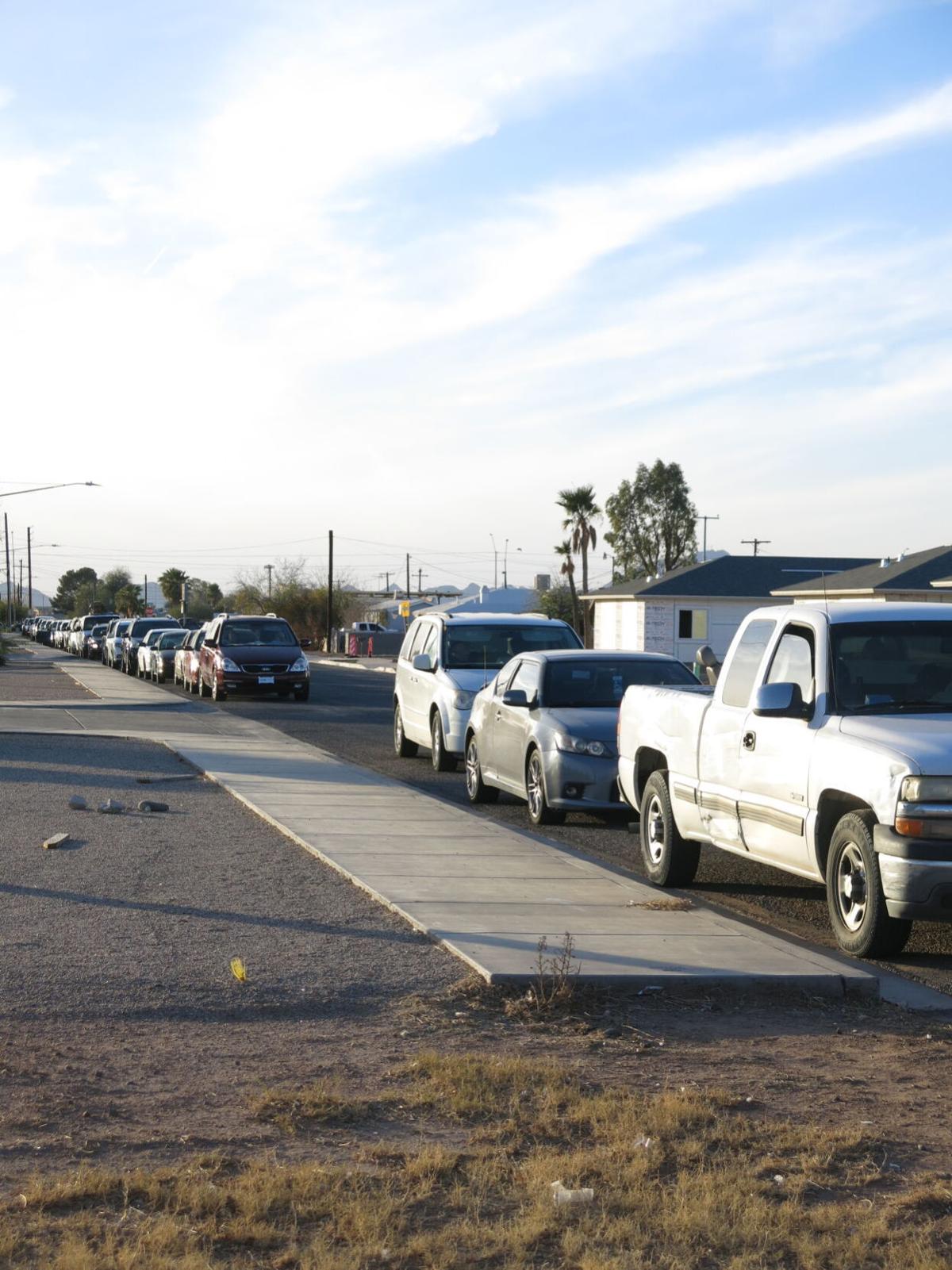 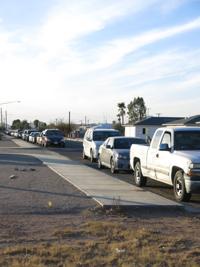 Cars line up along West Palo Verde Avenue in Coolidge for a food donation drive on Wednesday, Dec. 23.

Bernard White Jr. carries food boxes to cars in line at a food drive in Coolidge.

Cars line up along West Palo Verde Avenue in Coolidge for a food donation drive on Wednesday, Dec. 23.

COOLIDGE — City officials and the Community Action Human Resources Agency took advantage of a local organization’s surplus to give out over 300 food boxes in Coolidge.

Hundreds of cars lined up outside the Coolidge Police Department to receive the meals in the afternoon of Dec. 23.

“There is a legitimate need,” said Mayor Jon Thompson. “And now they have something to eat, which is important. It worked out well for everyone.”

Thompson and City Manager Rick Miller were personally on hand to deliver the boxes, along with Coolidge Rotary Club President Julie Leonard and her daughter, Rachel.

The organization responsible for providing the food was Free Fresh Emergency Food Mission, a Chandler-based charity started last year by Bernard White as a way to provide door-to-door service to vulnerable homes.

White said that in addition to delivering food boxes, the organization’s goal is to prevent homelessness and provide solutions.

“Most people suffer in silence,” White said of those facing housing insecurity. “Especially if it is their first time struggling with this, it’s unfamiliar territory, so they become paralyzed and don’t necessarily take action.”

In addition to food, White cited transportation as a major factor in empowering targeted communities, but that help can mean anything from assisting in a phone call to providing work boots. Since the start of the holiday season, White said they’d doubled their food delivery capacity from 30 to 60 tons a week. During the first two weeks of December, Free Fresh delivered over 2,500 food boxes to the towns of Globe and Superior.

The Coolidge operation came together in less than 24 hours. According to Mayor Thompson, Maria Salcido with CAHRA contacted him and said that Feed Fresh was looking to deliver surplus food boxes. Thompson hoped that the city would be able to organize more food donation events, and with greater publicity, in the future.