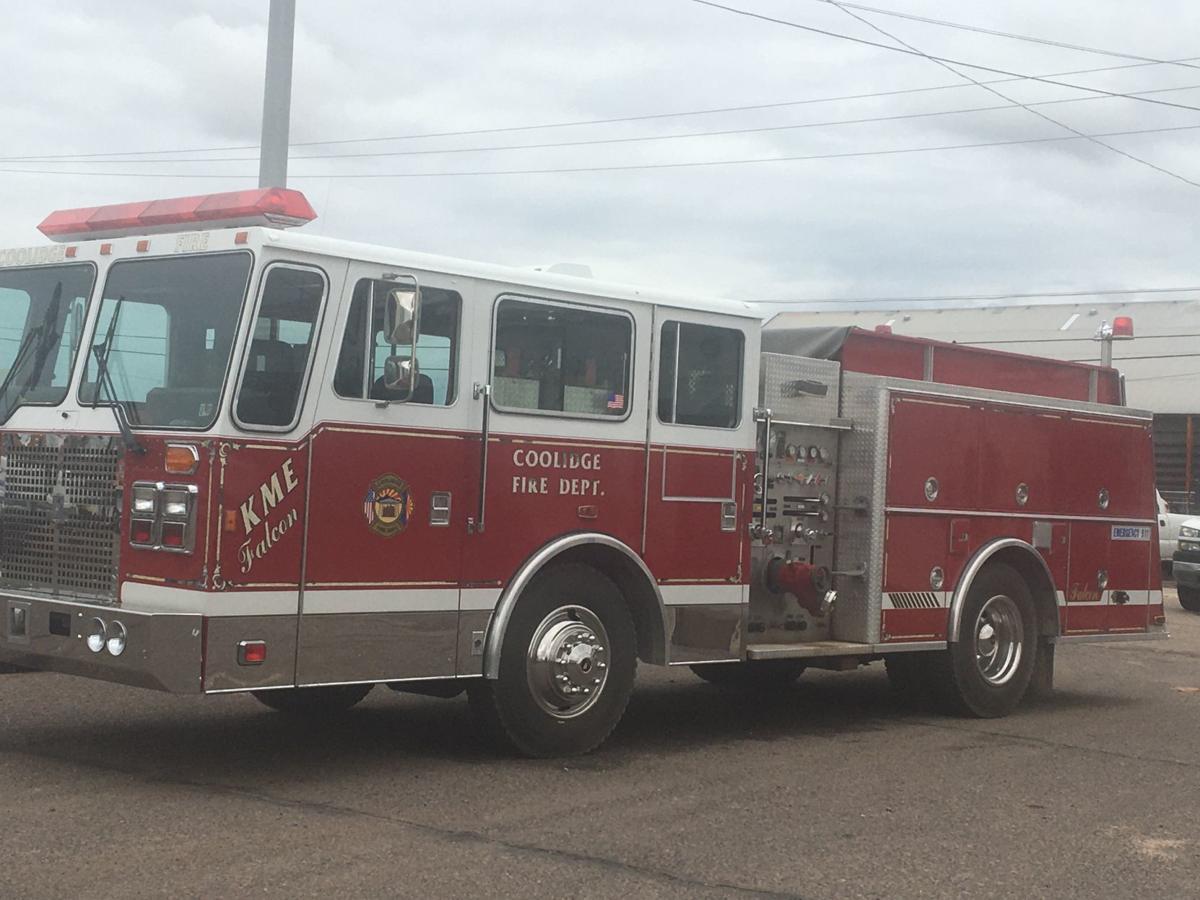 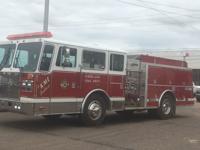 Coolidge City Council first examined the feasibility of refurbishing this 1992 KME Falcon to be used by the Coolidge Fire Department during its March 9 meeting. 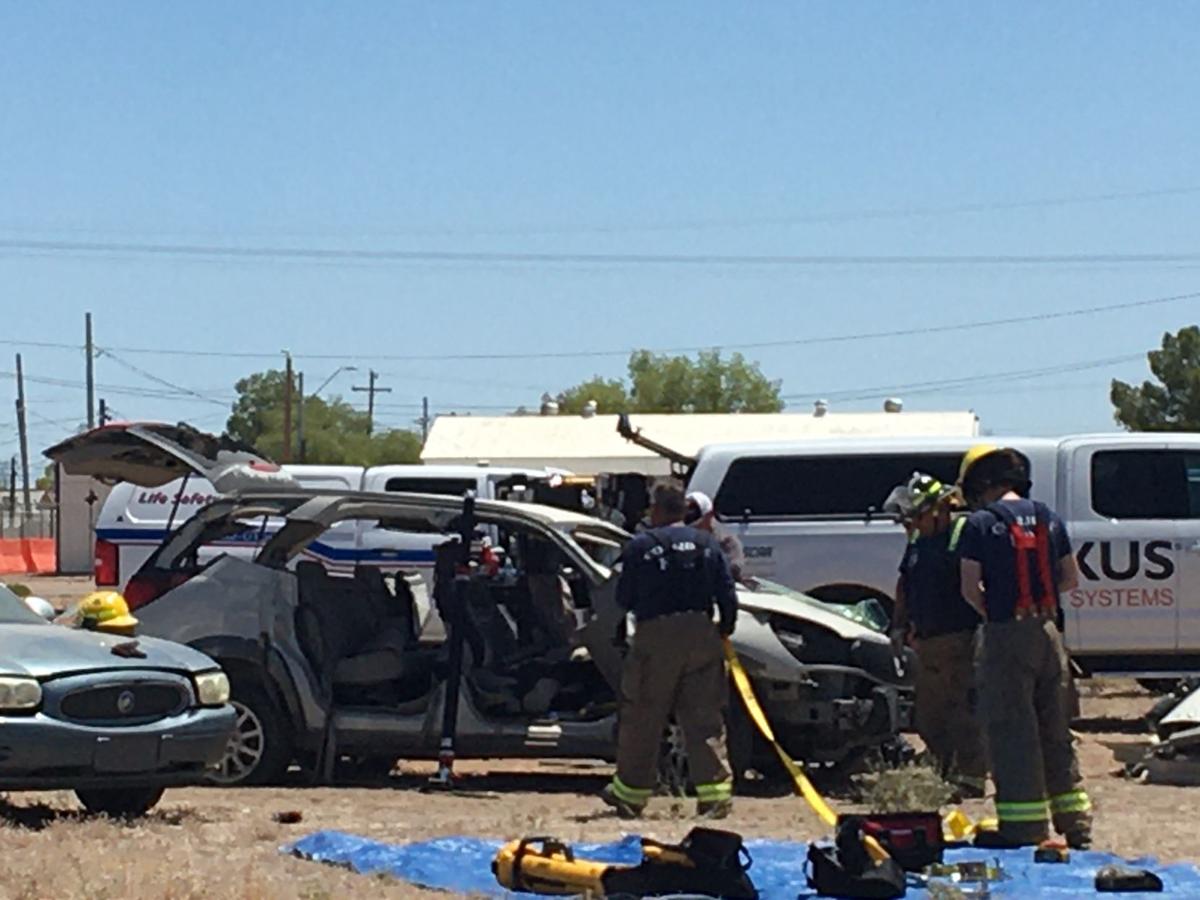 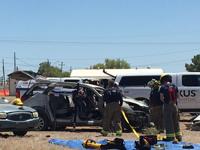 Coolidge Fire Fighters practice with a set of battery-operated extrication equipment, which CFD purchased through a Governor’s Office of Highway Safety Grant it received in August, in May.

Coolidge City Council first examined the feasibility of refurbishing this 1992 KME Falcon to be used by the Coolidge Fire Department during its March 9 meeting.

Coolidge Fire Fighters practice with a set of battery-operated extrication equipment, which CFD purchased through a Governor’s Office of Highway Safety Grant it received in August, in May.

COOLIDGE — Following a lengthy discussion that included plenty of questions from the Coolidge City Council and some disagreement, the issue of refurbishing a 1992 fire truck that would serve as Coolidge Fire Department’s primary response vehicle was temporarily tabled.

The council began examining the possibility of refurbishing the vehicle — a KME Falcon known as Engine 533 — in March. Once refurbished, the older model firetruck would replace Engine 534 as the department’s front-line vehicle to reduce cost associated with consistently repairing Engine 534.

A 2009 Pierce Velocity, Coolidge firefighters use Engine 534 on a day-to-day basis to respond to EMS calls or fires.

In 2018 Engine 533 was removed from service after the vehicle’s pump failed testing, Coolidge Fire Chief Mark Dillon told council during the May 26 council meeting. Among other updates, refurbishing the vehicle would bring the pump back into compliance.

The vehicle currently has about 21,000 miles on it and about 2,000 operational hours. Once refurbished, the CFD could gain another 10 to 15 years of service out of the Engine 533 Dillon noted.

The change would save the city on maintenance costs, as CFD estimates that it spent over $19,000 on repairing Engine 534 during the previous fiscal year. The department’s total annual maintenance budget is $32,000.

Much of the repair costs associated with Engine 534, Dillon said, result from having to take the vehicle to third party maintenance facilities in Casa Grande or in the Valley for specialized service.

Refurbishment of the vehicle would be completed through Fire Trucks Unlimited, a company that specializes in firetruck refurbishments based out of Henderson, Nevada, and would cost about $192,538.

The total estimated cost of the refurbishment would include the addition of a new air conditioning system, brand new injector pumps, suspension components and steering components among other updates.

All updates made to the vehicle would be warranted for one year.

But council members raised some questions about that projected figure.

Councilman Steve Hudson voiced the desire to have more time to look into the matter, citing that it had been brought to his attention that a brand new fire truck could be purchased for about $400,000.

But Dillon warned that the vehicles would not be comparable.

However, some Coolidge firefighters disagree. Speaking to PinalCentral, a CFD firefighter who asked not to be named due to fears of repercussions from the department, said that purchasing a comparable truck new could potentially cost anywhere from $350,000 to over $400,000.

Both Engine 533 and Engine 534 feature Class A Pumpers, which can pump about 1,250 gallons per minute.

According to the CFD firefighter, comparable trucks in new condition can be purchased for a base price just over $410,700 to $442,200. However, he noted that in speaking with an fire equipment company he learned that adding on additional features that would be necessary to meet the department’s needs would likely bring the total to under $500,000.

But as some council members stated during the council meeting, even that price may be beyond what the city can afford at this time.

“There’s no way that we could afford a brand new truck,” Hudson said. “Even if we found one for $500,000, we would still have (debt-service) if we don’t have the cash to pay for it. And so, we have to put aside another $500,000 (so) if something were to happen down the road we could show the state of Arizona that we have the capability to pay that truck off.”

The right solution, however, may not be found in making Engine 533 the front-line vehicle for the department, the Coolidge firefighter noted, as it would put additional pressure on firefighters.

“Bringing that in as the first-out truck, you (would) have a lot of unnecessary concerns,” he said. “Am I going to make it to the call? Am I not going to be able to stop because it doesn’t have the engine brake? Am I setting this correctly? Am I pumping this correctly?”

The vehicle could also expose fire fighters to a hoard of safety issues, he said.

Features like engine breaking work help to quickly slow down large vehicles like fire trucks in tandem with the breaks. The feature is one that is not included on Engine 533, the firefighter said.

“(Engine 533) is a 1992 model so obviously safety standards have changed in the past 30 years,” he said. “The refurbishment that they’re doing will not change the safety of the truck. The way it’s built, the cab (and) the features on the pump aren’t up to today standards.”

The concerns include the height of the vehicle’s cab, side-facing seating inside the vehicle and the lack of a compressed air foam system as part of the truck’s pump.

At the council meeting, Dillon also indicated that upon refurbishment, Engine 533 would be compliant with NFPA II requirements.

To keep the safety of firefighters at heart, the city ought to look at recommendations that go beyond the NFPA 1901 guidelines, the CFD firefighter said, such as those set by the Fire Apparatus Manufacturers’ Association.

A study conducted by the National Institute for Occupational Safety and Health, FAMA and other organizations published in 2015 recommended that seat-to-ceiling measurements inside the cab of a firetruck be 987 mm, approximately 39.8 inches, to more practically protect firefighters in the case of a vehicle roll-over.

Comparatively, NFPA standards require that seat-to-ceiling height be about 35.56 inches for non-suspension seats.

The lack of CAFS on Engine 533’s pump also poses risks to firefighters attempting to control a blaze and the community, the firefighter said. CAFS enables firefighters to reduce flames or smoke on a fire’s edge — or “knockdown” a fire — at a fast rate compared to water.

Using water can take about 50 seconds for knockdown of a fire, whereas with CAFS achieving similar results only takes approximately 11 seconds, a 2001 study conducted by the Los Angeles County Fire Department found.

CAFS not only reduces the amount of water needed to put out a fire, but it can also reduce the amount time firefighters are exposed to high temperatures and smoke in a structure fire and overall property damage.

During council, Mayor Jon Thompson also inquired about a used 2005 Pierce Enforcer listed on the Fire Trucks Unlimited website for sale. At $170,000, the vehicle has approximately 100,000 miles on it and has been previously used as a rental vehicle, Dillon said. The vehicle, he noted, also has not been refurbished.

According to Vehicle Maintenance Lead Mechanic Zach Tate, at about 15 years old, the truck would have to be refurbished before being placed into service.

Refurbishing the 2005 truck would cost at a minimum of $100,000. Tate estimated with the technology aboard the truck, the price could potentially double.

Although purchasing the vehicle would actually cost the city around $30,000 after applying the $140,000 from the sale of Rescue 534, the city would also be required to pay the additional refurbishment costs.

“Don’t get me wrong,” Tate said. “I think of the fire department very highly. I would love to give them the most brand new (equipment), but it just comes back to the money situation.”

In addition, he noted that the operational costs of the KME compared to the 2005 model would be cheaper for the city overall. Parts of the newer model vehicle that would typically be more expensive to maintain, he said, include the Tak-4 suspensions, front tires and disc break system.

Council members, however, were curious to know more about the 2005 vehicle.

According to Dillon, comparing the two vehicles is like comparing “apples to oranges.”

“I don’t know if it actually would be safer,” he said. “It would be easier to probably operate, it would probably look like a newer body style, but as far as maintenance cost it’s going to be more expensive. Safety factors are basically going to be the same because they are both going to meet NFPA requirements for refurbishments.”

But according to the CFD firefighter, even the 2005 model presents many of the same safety concerns firefighters currently have with 1992 KME Falcon. He cited the low-profile of the vehicle’s cab and the lack of CAFS as similar issues.

A motion to table the agenda item at council passed in a 5-0 vote.

COOLIDGE — Setting an expenditure limitation of more than $50 million, the City Council voted to approve a tentative budget for fiscal tear 20…

COOLIDGE — Two weeks to a month.

COOLIDGE — After months of discussion, debate and the establishment of a committee to further study the issue, the Coolidge Fire Department pr…