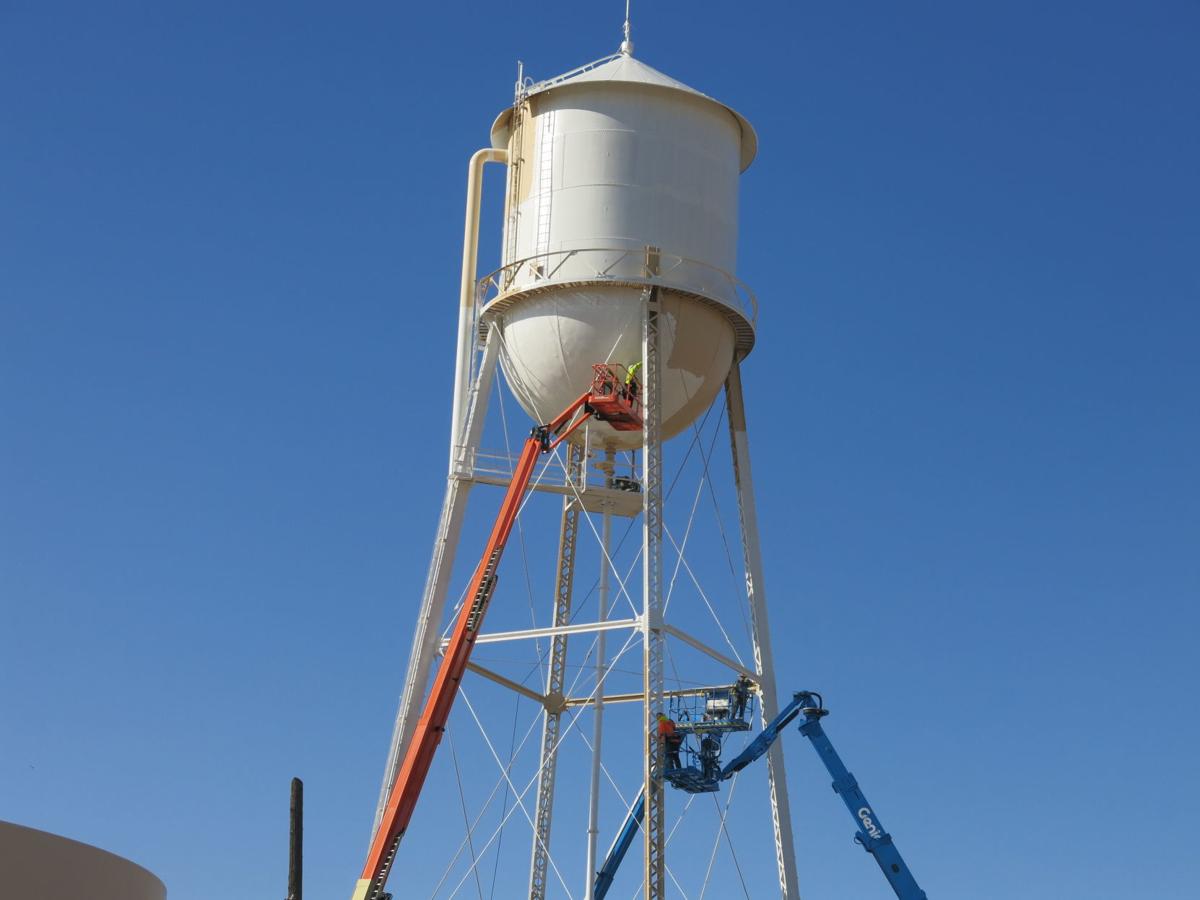 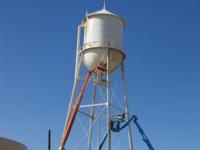 Workers from Revolution, the contractor hired by Arizona Water Company to paint the Coolidge water tower work on applying coating to the tower, just one of many steps to be completed before the tower can be lighted through a joint project between Coolidge and the water utility. 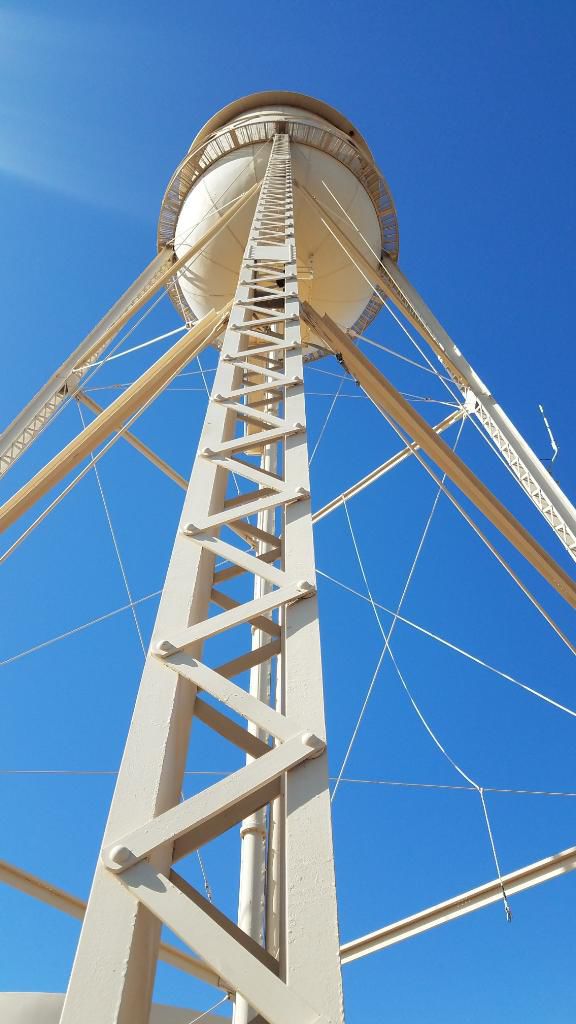 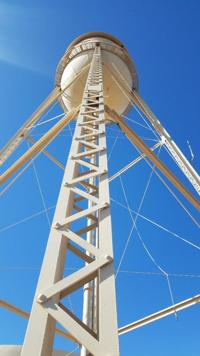 A view of the Coolidge water tower from below. The city of Coolidge, in partnership with Arizona Water Company, is seeking to light the active tank similar to the project that was completed by Gilbert in its downtown square.

Workers from Revolution, the contractor hired by Arizona Water Company to paint the Coolidge water tower work on applying coating to the tower, just one of many steps to be completed before the tower can be lighted through a joint project between Coolidge and the water utility.

A view of the Coolidge water tower from below. The city of Coolidge, in partnership with Arizona Water Company, is seeking to light the active tank similar to the project that was completed by Gilbert in its downtown square.

COOLIDGE — Since the mid-19th century, water towers have played an important role in agriculture and urban development. In some towns, the original water tower may no longer be operational, while in other communities the water tower still plays a key role in supplying water to area residents. The latter is the case for the city of Coolidge.

Located on First Street, the Coolidge water tower is an active unit that is believe to have been first constructed in 1929 — long before Coolidge was officially incorporated.

In the years following construction, the water tower not only served to store water but also as a beacon that could easily be spotted around multiple places in Coolidge.

And decades later, the unit still has an important role to play within the city, servicing about 4,800 Arizona Water Company customers in the area.

So when the water utility approached the Coolidge about re-coating the structure and adjusting the lettering, city officials asked if the company would be willing to explore the idea of lighting the tower.

The inspiration for the idea came from Gilbert’s water tower, located in the heart of downtown Gilbert. According to Kieren, the dialogue between Arizona Water and Coolidge about the tower began about three years ago.

For Arizona Water, the decision was based, in part, on its desire to maintain some of the more easily visible elements it holds within communities in Pinal County.

“There’s just not many things as a company that we can do that would be as visible other than providing donations,” Kieren said. “This is something that would be tangible for the rest of time.”

In addition, at a time when Arizona Water could have opted to do away with the tank altogether, the company instead felt that it was better to maintain the current system to benefit both the utility and the city.

“There are not many water towers left in this region,” Kieren said. “Most everybody, when they are designing a water system, look at those towers as hard to maintain. So most cities, municipalities and private water companies are opting to install ground-based pumping systems.”

But it wasn’t until more recently when Arizona Water began making steps toward repainting the tower. In order to enable the tower to be properly lit, Arizona Water decided that it would swap out the standard desert tan it uses to coat other towers and tanks for a more reflective white coating.

City officials from Coolidge, along with representatives from Arizona Water, then met with Gilbert’s Parks and Recreation Department to understand in greater detail what steps Gilbert took to light its water tower.

“With the city of Gilbert, the lighting was actually done as kind of a one-off for one of their Christmas lighting projects,” Kieren said. “And this is what it’s turned into.”

From the meeting, Coolidge city officials also learned about what pitfalls to avoid when starting the project, including how many lights install.

“The initially effect wasn’t quite what (Gilbert) was looking for,” City Manager Rick Miller said. “There wasn’t enough lights, and you had this effect of shadows between the lights, so it almost looks like it’s candy striped. They suggested putting a couple more lights up there and reflectors so that light spreads out evenly around the tower.”

Both the Gilbert water tower and the Coolidge water tower share a number of similarities when it comes to the size and shape of the structures. The two were also both built in the late 1920s.

Gilbert lights its water tower with varying colors throughout the year to recognize different occasions, from Breast Cancer Awareness week to Memorial Day. Nonprofit organizations and other organizations can also apply to have the water tower’s lighting changed for brief periods of time to raise awareness about a specific cause that is important to them.

The colors change to recognize about 15 different events throughout a month. At other points throughout the month, the structure is lit with white LEDs.

According to Miller, the Coolidge water tower will also likely follow a similar routine once it is lit. The lighting system would be programmable, and the lights may move to create different effects, he said.

Coolidge’s water tank sits about 120 feet in the air — a necessary feature of its function, Kieren noted, as the height is what provides the pressure needed to service the city. The structure features a pipe that emerges from the center of the bowl — an element that is missing on Gilbert’s inactive tank.

The differences mean that the lettering on the tank will have to be readjusted to make up for visibility issues.

To paint the water tower, Arizona Water hired Revolution — a private contractor. Revolution will also be installing the tower’s lighting once the coating process is complete.

According Miller, estimates from Gilbert indicate that the lighting system cost approximately $89,000. However, Miller indicated that Revolution believes the lighting for the Coolidge water tower will likely come in under that figure.

Coolidge is currently accepting donations from community members and local businesses that would like to contribute to the project.

Donations made to Coolidge must be made out in check, Miller noted, and must be dropped off at or mailed to City Hall, 130 W. Central Ave.

Donors, he said, will likely be recognized during an official lighting ceremony once work on the tower is complete.

In addition to any donations the city receives, Miller noted that funding for the project will likely come from $25,000 committed to beautification in the city’s fiscal budget.

“We’re really celebrating history, and pride in the community,” Miller said. “(The project is) allowing us to recognize special holidays and events that people want to celebrate on an iconic structure in the community.”

COOLIDGE — Constructed 90 years ago, the Coolidge water tower was likely designed with functionality more in mind than overall visual appeal.