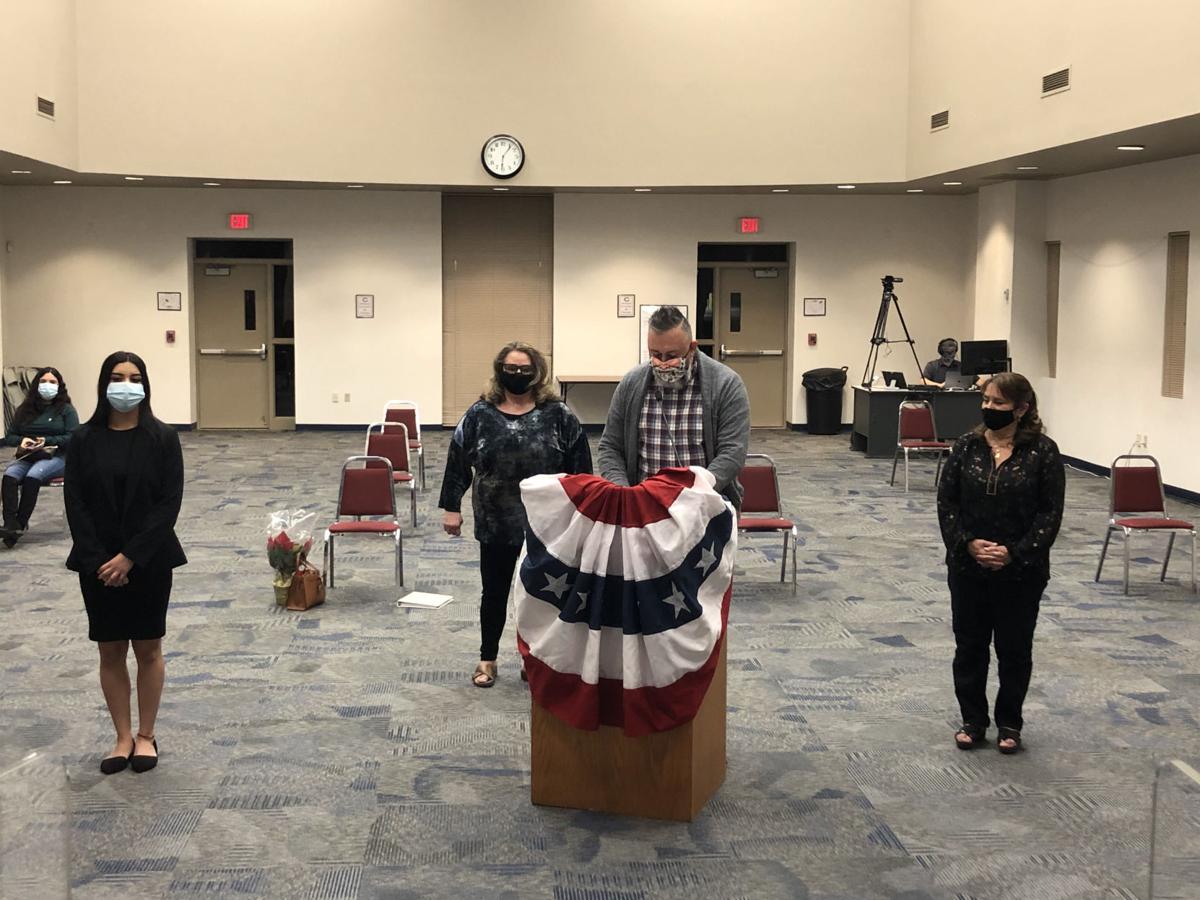 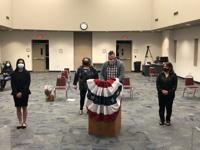 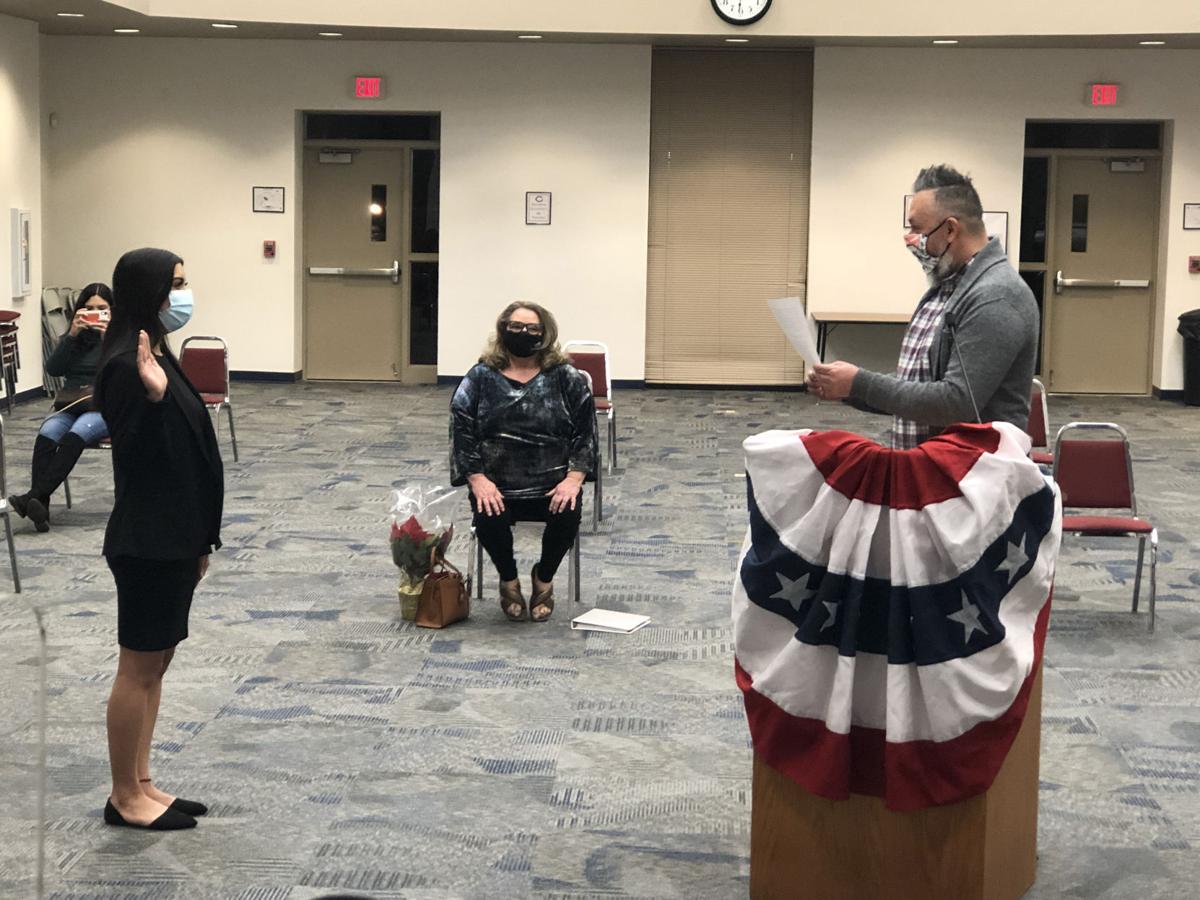 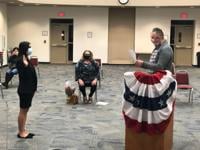 Diana Guerrero, at 20 the youngest member of the Coolidge Unified School District board, is sworn in Dec. 8.

Diana Guerrero, at 20 the youngest member of the Coolidge Unified School District board, is sworn in Dec. 8.

COOLIDGE — Despite a decision the week before to transition to remote learning, the pandemic and its impacts dominated the discussion Dec. 8 at the Coolidge Unified School District board meeting.

Superintendent Charie Wallace announced that within a span of five days, 19 staff members and 18 students were quarantined, including one staff member who was hospitalized and was in serious condition. In addition, six custodial staff members at the high school were quarantined and the school was now using substitutes. Wallace also noted that 112 additional students were absent last week, with parents reporting they either had symptoms, tested positive for COVID-19 or were directly exposed to someone who did.

Wallace did not sugarcoat the challenges facing the district regarding student participation in the upcoming weeks of remote learning.

“Remote learning is not ideal,” Wallace said. “It is difficult for students to stay focused or engaged, or they just don’t log in. … Anybody who has taught high school knows that high school kids, their job is to figure out how to beat the system.”

Wallace said that plans were in place both to help students who may struggle to graduate on time or lose credit hours, including “robust” summer school programming, but also to enforce remote attendance. The school can turn off students’ iPads if they don’t turn in work and/or calls to parents go unheeded.

“We just rolled with non-attendance in March,” Wallace said. “We have made it clear that is not going to be the case next year.”

Board President Michael Flores praised the district’s readiness for remote learning but also questioned the fairness of criticism or ultimatums aimed their way from the community.

“The comment has been made to ‘do our job,’ directed at admin or the superintendent,” Flores said. “What you need to know is from Day 1, last February, we have done an exemplary job. … It just really gets to me to know that people just don’t understand the amount of sacrifice and effort and time that is put into every detail.”

Flores cited the extensive planning the school board had done since early in the year, including a 100-page pandemic planning document and countless special meetings.

“Did we get help from state or city officials? No,” Flores said. “We did what we had to do to keep our school safe, and teachers, staff and students safe.”

Director of Business Services Alyssa Garrett reported to the board that the pandemic needs were still well accommodated by the 2020-21 budget. Despite funding adjustments that became necessary due to students’ designation as hybrid learners, an enrollment stabilization grant helped compensate for a loss of $1 million. District-wide enrollment had also dropped by around 100 over the past year, to just under 2,050 students.

“There will be an impact we all know of in other areas: mental health, students, quality of education,” Garrett said, “but in terms of budget, federal funds coming in will pick up where COVID-19 is causing issues.”

Garrett also mentioned that the district would be looking at potential staffing and hiring changes in February, but that it would be tough to predict what the average daily membership calculation would be for next year. Students who are designated as distance learners are allocated 5% less state funding overall.

Earlier in the meeting, the newly elected and re-elected board members for 2021 were sworn in by chanting the CUSD song. The only non-incumbent, 20-year-old Diana Guerrero, officially became the youngest elected school board member; Guerrero was replacing the outgoing T.J. Shope, who did not seek re-election and who himself had first become a board member at age 23 back in 2009.

Shope, who was elected in November to the Arizona Senate after serving eight years in the House, said his time on the school board had been “a heck of a ride” and that he hoped he provided a good example — along with Flores, with whom he attended school — of Coolidge residents returning to give back to their community. Shope cited raising teacher pay — a 26% increase — as a major accomplishment during his tenure.

“We were the second lowest pay in the entire county, which was embarrassing,” Shope said. “If there is a legacy to leave behind, we got that turned around and hopefully that will continue.”

Shope said that as vice chair of the Senate Committee on Education, he would like to continue to help Coolidge in that capacity.

“We will miss you greatly and consider you an ally,” said board member Kris Gillespie. “I’m always amazed at what you were doing on the state level. It showed a lot of character that you still were on school board.”

Shope will receive an honorary gavel inscribed with the Coolidge logo at the end of the year as a parting gift.