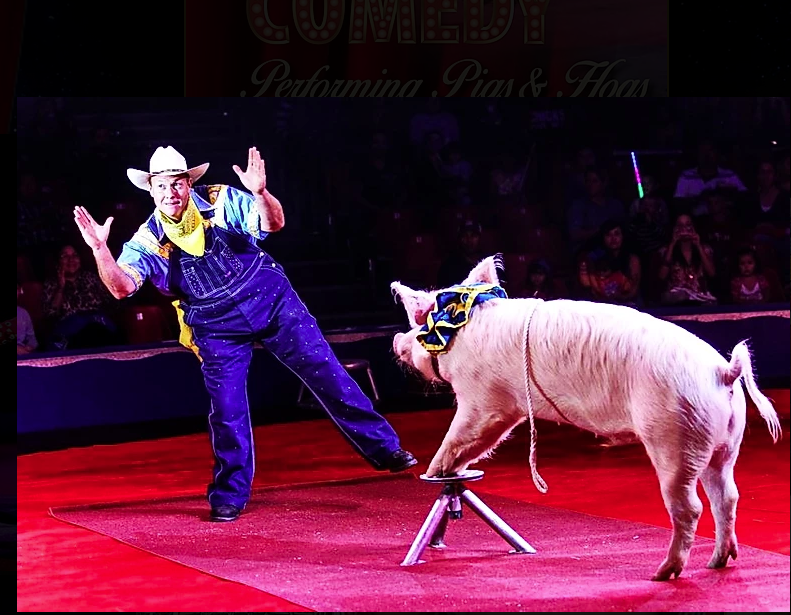 Les Kimes performs with one of his pigs in Pork Chop Revue. 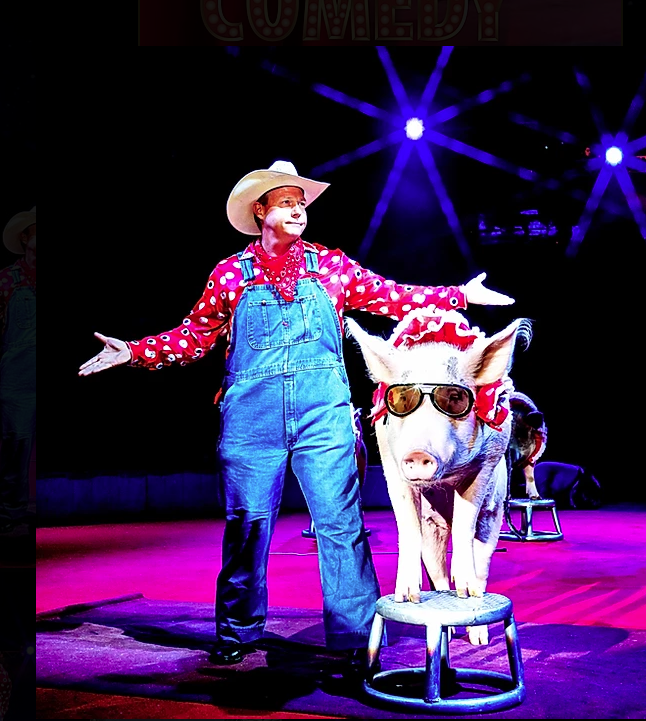 Les Kimes performs with one of his pigs during the Pork Chop Revue show. 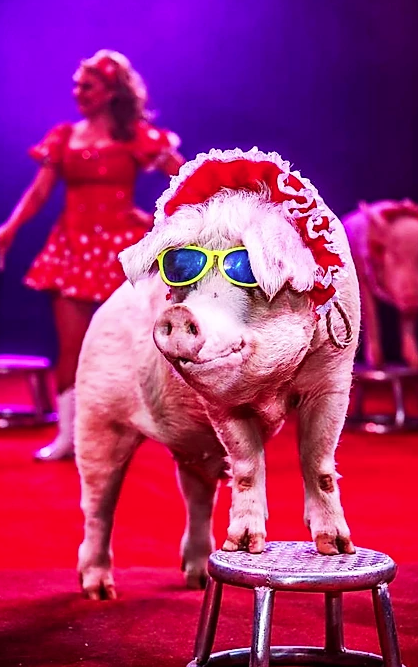 In Pork Chop Revue, pigs are the stars of the show.

Les Kimes performs with one of his pigs in Pork Chop Revue.

Les Kimes performs with one of his pigs during the Pork Chop Revue show.

In Pork Chop Revue, pigs are the stars of the show.

ELEVEN MILE CORNER — Whether the pigs are singing along to “Old McDonald Had a Farm” or pushing a baby carriage, Les Kimes hopes to see people smile when his well-trained swine are onstage.

With its slogan, “No matter what the gig, think pig,” the Pork Chop Revue makes its first appearance at the Pinal County Fair this year.

The Pork Chop Revue features pigs performing stunts and antics aimed at getting a few laughs and “ooohs” and “aahhhs” from the audience.

In some of the skits, the pigs wear hats and sunglasses or jump through hurdles, perform balancing acts or acrobatics. One pig sings, providing the “oink, oink” to a singing of “Old McDonald’s Farm.” Another pig dances.

Kimes, whose pigs have been in television commercials and have made movie appearances, said through each Pork Chop Revue show, he aims to demonstrate how smart pigs are.

In each of the stunts, Kimes said the pigs are not asked to do anything that a pig can’t do naturally.

“Pigs are very intelligent animals. They can learn most tricks in just a few days,” Kimes said.

The show combines the comedy of an animal variety show with a little bit of education about swine, said Kimes, who took the show over from his father, animal trainer Boyd Kimes, in the 1980s.

The Pork Chop Revue touring show started in 1956. Kimes performed in the show alongside his father since he was 3 years old before finally taking the show over in the 1980s.

“The show has existed for more than 50 years. I grew up in this business and my kids also grew up in the business,” Kimes said. “It’s a family business and our pigs are like family. They bond with us like we’re their parents.”

The Pork Chop Revue website describes the show as “an awesome display of some of the smartest swine in the country. These bodacious barnyard buddies present a show featuring amazing stunts and laughable antics. You will laugh as you watch these bundles of bacon jump hurdles, waltz and even sing. But these pigs don’t race. They’re too smart for that.”

Pigs of all sizes are the stars of the show, Kimes said. Among the performers are miniature pigs and medium and large swine, including a 700-pound hog.

“Pigs and hogs are put through their paces with each act leading up to the star of the show,” he said.

The Kimes family adopts their performing pigs when the animals are about two weeks old.

“We hand-raise them and they are with us for their entire lives,” Kimes said. “We work very hard to keep them comfortable. We take very good care of them.”

The Pork Chop Revue show will be performed several times throughout the Pinal County Fair in the carnival area of the fairgrounds.