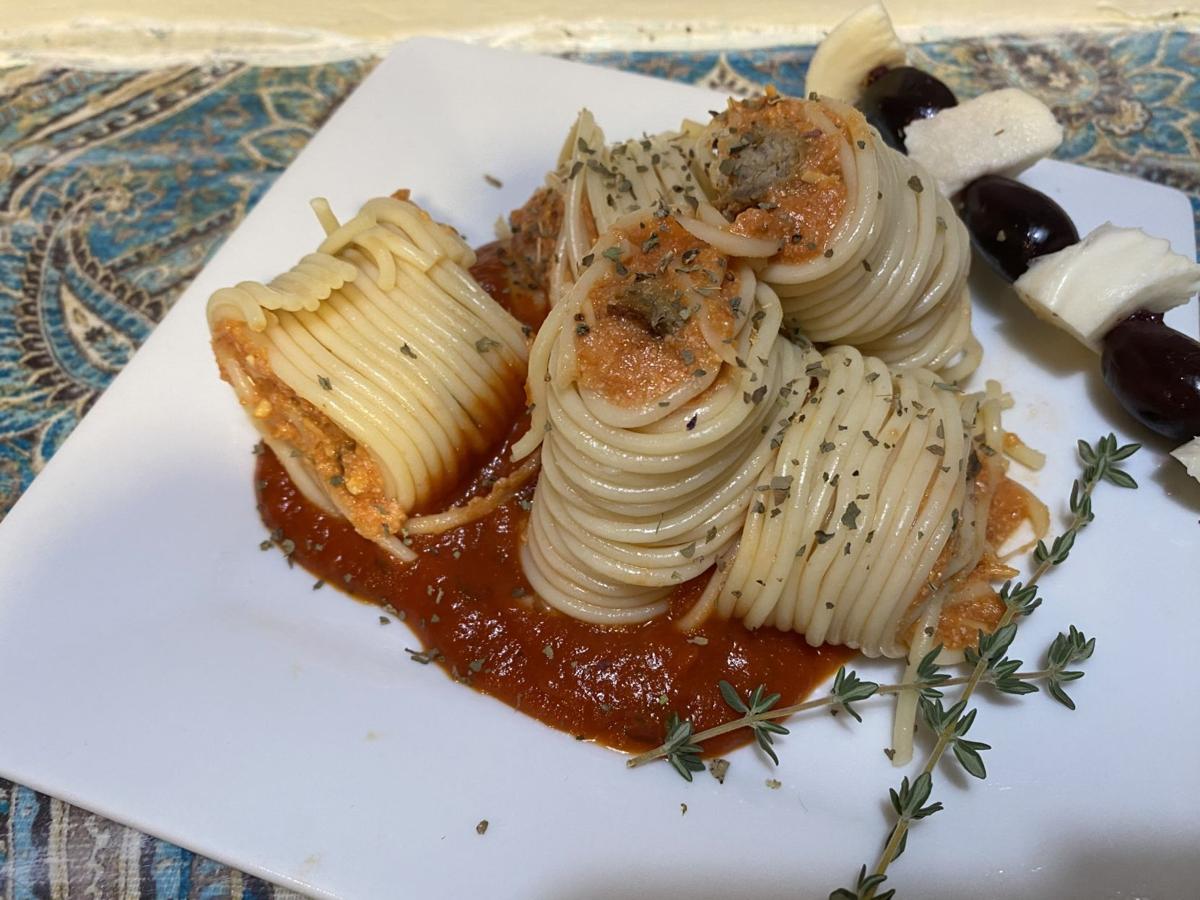 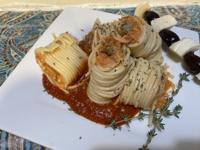 Spaghetti sushi is a fun twist on a classic dish. To make it, sauce, cheese and fillings are rolled into spaghetti. 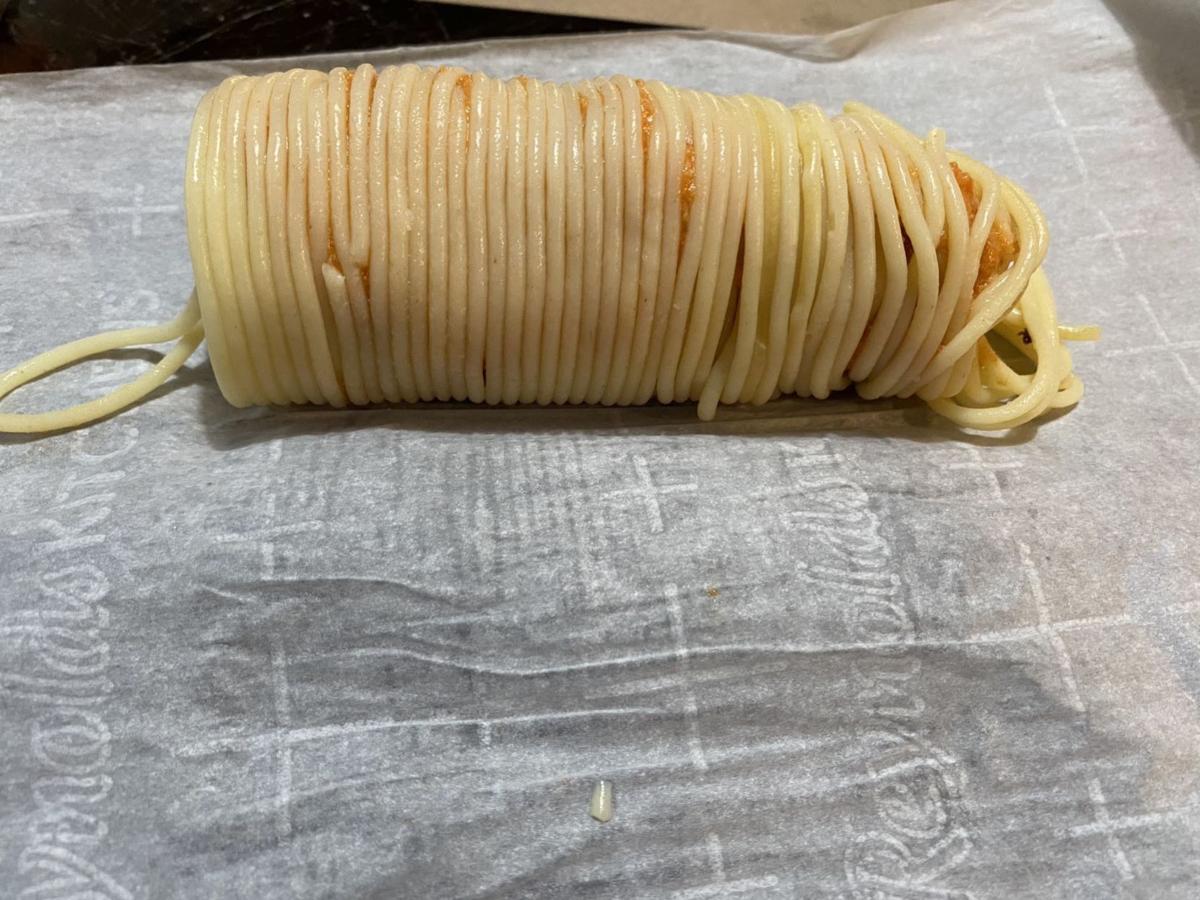 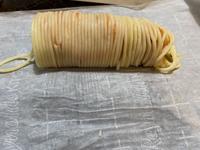 Spaghetti sushi is a new twist on a classic dish. To make it, sauce, cheese and fillings are rolled into spaghetti.

Spaghetti sushi is a fun twist on a classic dish. To make it, sauce, cheese and fillings are rolled into spaghetti.

Spaghetti sushi is a new twist on a classic dish. To make it, sauce, cheese and fillings are rolled into spaghetti.

I saw a video for spaghetti sushi on tastemade.com and had to give it a try, although at first I thought perhaps it was a joke.

For spaghetti sushi, pieces of spaghetti are linked up side-by-side to create a rectangular sheet of pasta. Filling — we used a ricotta-tomato sauce blend and turkey meatballs — is then spread over the pasta and it’s rolled up and sliced into pieces to resemble sushi.

The tastemade.com video made the process look so fun and easy I had to give it a try. With the help of a few of my neighbors, I spent a few hours recently, lining up pasta and rolling it into sushi. It was a lot of fun, but frustrating.

Pieces of spaghetti break very, very easily and although the goal is to get the pieces to adhere to one another, boiled pasta is sticky and tends to stick to the fingers.

Keeping the pasta in a bowl of cold water helps prevent the spaghetti from sticking to the fingers while working, making the task of lining them up a little faster.

While some instructional videos for spaghetti sushi recommend using sushi rolling mats, I found that parchment paper was easier. When I used a sushi rolling mat, the pasta stuck to the mat, making a bit of a mess.

The idea is to line the pieces of pasta lengthwise, one up against the other, to create a fairly wide rectangle. The ends are then cut to make them straight and even and the filling is spread. The pasta is then rolled and cut into sushi-like slices.

The best thing about the filling is it can be customized. We used the ricotta-tomato sauce blend recommended in the tastemade.com recipe and my own homemade turkey meatballs. But any sauce and any filling can be used. Sausage, bacon, black olives, mushrooms and just about any traditional pasta sauce additions or pizza toppings would work nicely with spaghetti sushi.

For this recipe, I made my standard turkey meatballs. Several people in my family do not eat pork, and some do not eat beef, so I use turkey or chicken quite a bit, although I’ve found that they tend to make a much drier meatball. To overcome the dryness of the turkey, I use crushed potato chips as the filling for my turkey meatballs (but don’t tell my health-conscious family members that they’re eating potato chips every time they eat my turkey meatballs). The oiliness from the chips seems to add enough extra oil to the meatballs that they stay nice and moist when cooking.

The turkey meatballs worked nicely in spaghetti sushi, although even though I made them fairly small, we still had to cut them into smaller pieces for rolling. They worked best when they were crumbled.

While spaghetti sushi is fun to try, it is difficult to make the pasta stick together and look good after it’s rolled. Lining up the pasta is a long and frustrating process. Each piece should be about the same length and they do break very easily. Lining up enough pieces of pasta to create a rectangle took about 20 minutes.

Another drawback is that once the pasta and meatballs have been rolled and cut into cute little sushi-like pieces, they are cold and need to be reheated before serving.

Spaghetti sushi is a cute little appetizer, although my first few batches turned out a bit messy. It took a bit of extra care to make the spaghetti sushi look good enough to photograph. And in the end, pretty much what we ended up with was a plate of spaghetti and meatballs, just presented in a slightly different way.

But spaghetti sushi is a fun way to keep kids busy and allow them to play with their food. Kids might enjoy having a spaghetti sushi rolling party or trying it with their friends. Adults might also enjoy it. However, using boiled lasagna noodles might be easier and a lot less frustrating.

1 box, about 16 ounces, of thin spaghetti, boiled and cool enough to touch

About 12 meatballs, cut into smaller pieces

In a bowl, combine cheeses and tomato sauce. Stir well and set aside.

Using longer pieces of pasta, lay pieces of spaghetti side by side on a piece of parchment paper until enough pieces have been lined up to form a rectangular sheet of pasta. Press pieces gently to one another to get them to adhere to each other. Cut ends to even up the edges.

Working carefully, spread sauce and cheese mixture over about a quarter of the pasta sheet. Place meatballs along the bottom edge.

Working from the end with the filling, use parchment paper to gently roll pasta into a long roll. Cut into slices. Cutting between pieces of spaghetti helps keep the pieces together. Plate pieces on a dollop of pasta sauce and sprinkle with cheese. We served ours with skewers of fresh mozzarella and calamata olives.

Mix all ingredients in a bowl until well combined. Roll into small balls. Fry or bake until well done.

CASA GRANDE -- Gougères are traditional puffy French cheese rolls that are light, airy and i…

CASA GRANDE — Few things in life are as delicious as freshly baked homemade bread. And few aromas stimulate the senses like baking bread.

CASA GRANDE -- A beverage that dates back to medieval times is a favorite celebratory Christmas beverage among Arizona adults.

CASA GRANDE -- With the 2021 Girl Scout Cookie season fully in swing, it’s a great time to try a few recipes that feature the annual sweet tre…

Recipe Review: Haitian kremas is a great addition to any Mardi Gras celebration