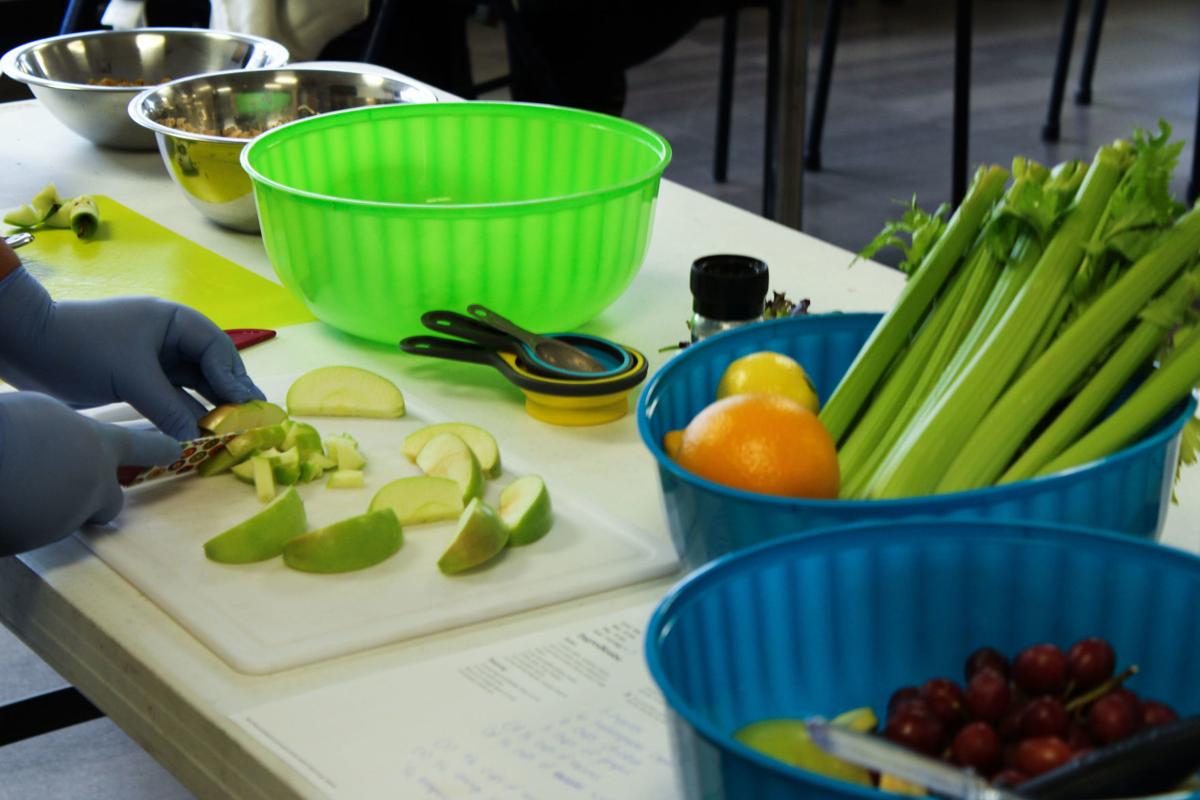 Diabetes nutrition technician Mallory Smith chops an apple for a chicken Waldorf salad on Jan. 23 at Native Health in Phoenix. Diabetics are taught to prepare healthy recipes during the 20-week free “Food for Thought” program. 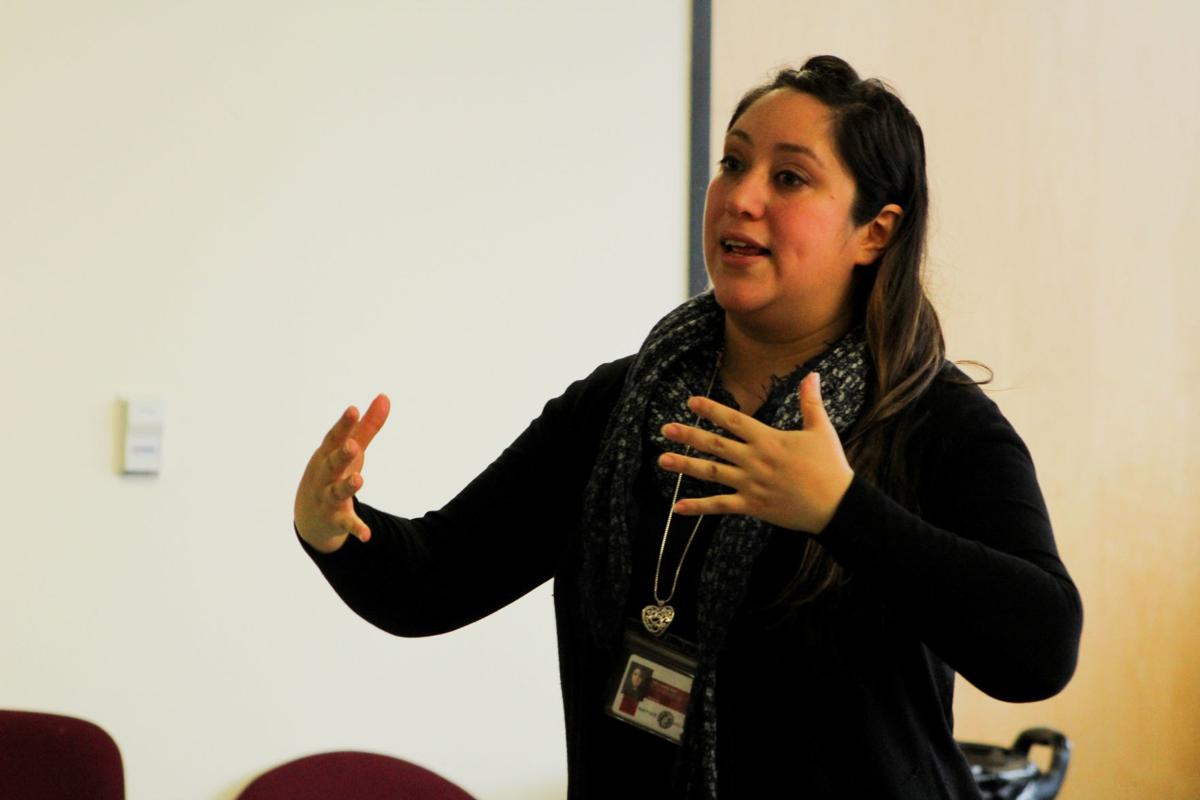 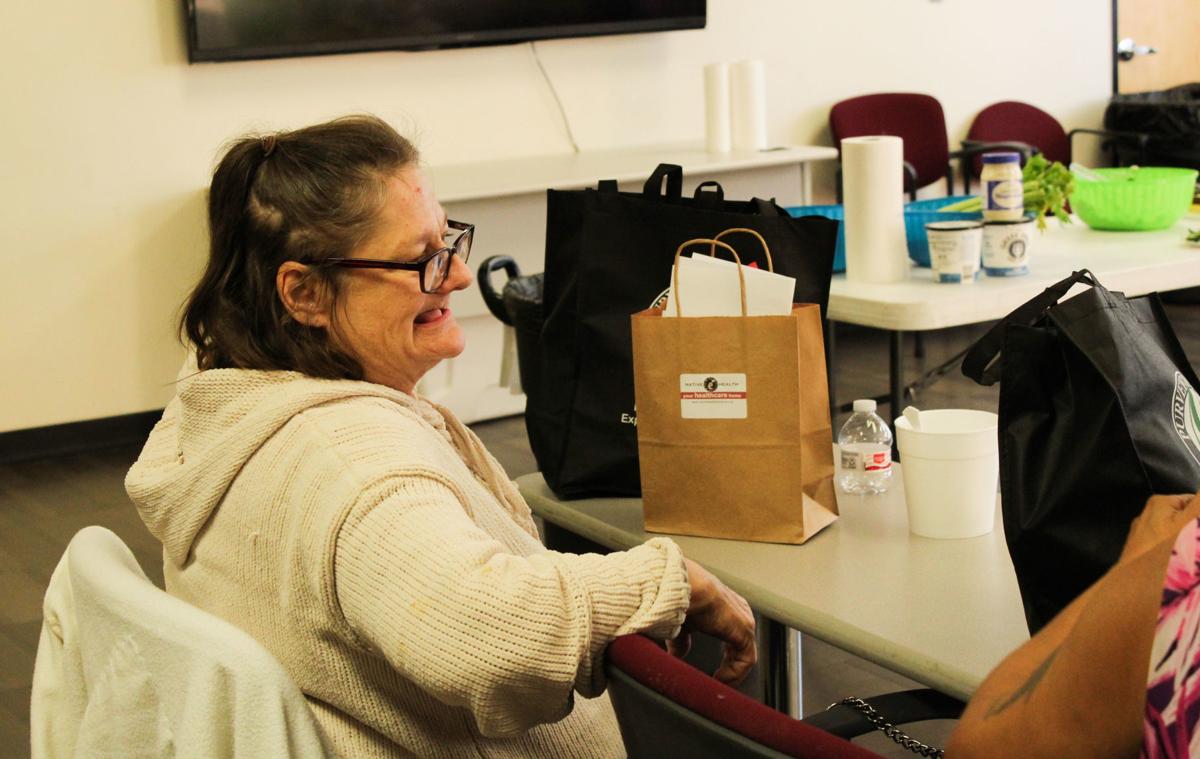 Diabetes patient Marla Wilson receives shopping bags full of ingredients to make a chicken Waldorf salad, along with a copy of the recipe. (Photo by Alicia Moser/Cronkite News) 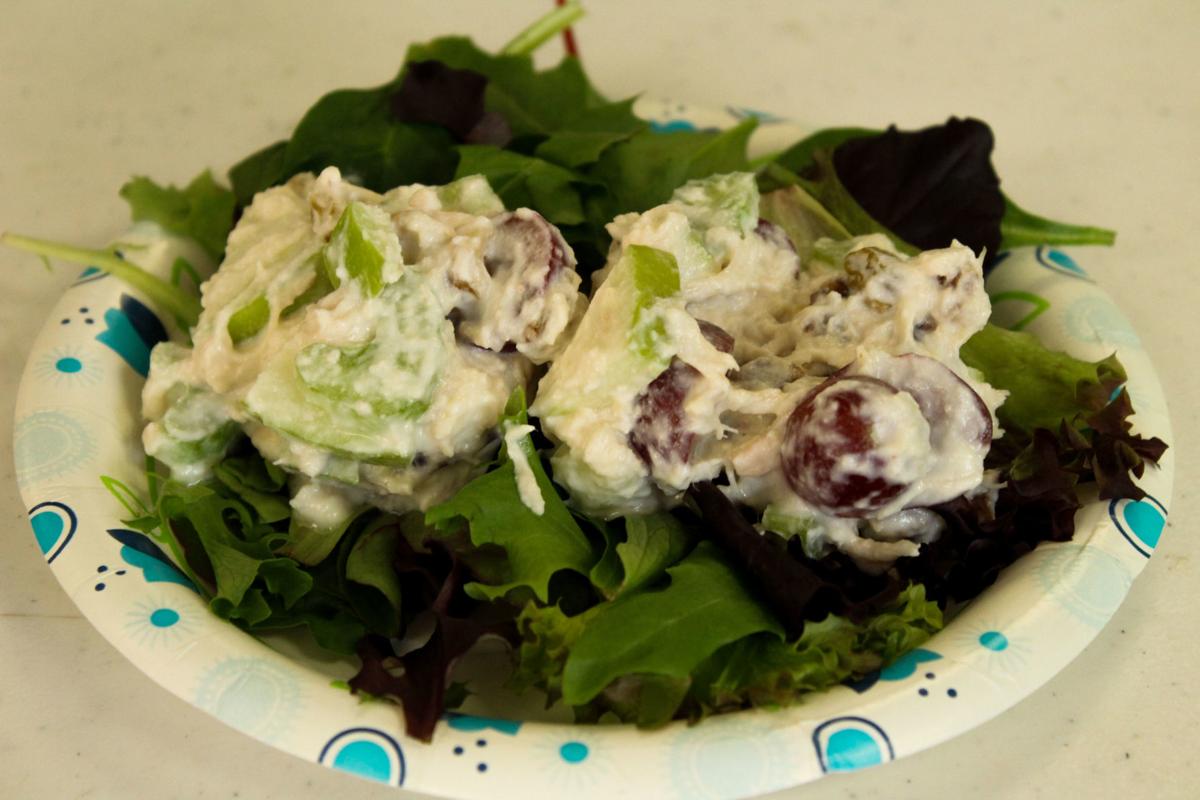 The finished product: a chicken Waldorf salad made with fresh produce. (Photo by Alicia Moser/Cronkite News) 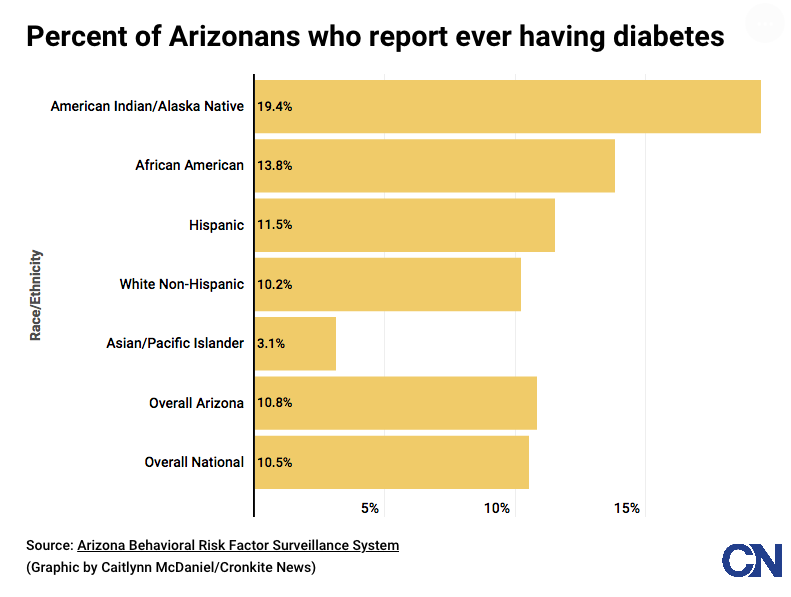 Diabetes nutrition technician Mallory Smith chops an apple for a chicken Waldorf salad on Jan. 23 at Native Health in Phoenix. Diabetics are taught to prepare healthy recipes during the 20-week free “Food for Thought” program.

PHOENIX — Cooking equipment at the ready, Mallory Smith stands before a table loaded with fresh greens, nuts and fruit.

“Has anyone used the apple slicer before?” she asks the dozen people gathered this weekday morning at Native Health. “Might take a little bit of practice.”

Over the next hour, Smith chopped, mixed and scooped as she demonstrated how to make a chicken Waldorf salad as part of a new class to encourage diabetes-friendly cooking to help diabetics manage their blood sugar.

“A lot of people in the Native American community and in the Phoenix community, they get diagnosed with diabetes but aren’t necessarily educated on it,” Smith said. “Having this class helps them … find out what diabetes is, what kind of foods they can eat with diabetes, what can help them for their overall health.”

The 20-week course, which is free and open to anyone, is held morning and evening every Thursday through June 4. Each week, Smith demonstrates a new recipe, and participants will go home with free groceries to replicate the dishes at home.

Food for Thought is part of Native Health’s diabetes management program for the Native American community. Michelle Hill, a certified diabetes educator at Native Health, said the goal is to show patients that eating properly can be “easy, accessible and economical.”

More than 30 million Americans have diabetes, according to the American Diabetes Association. That includes 695,000 Arizonans – or 12.5% of the adult population.

Both nationally and in Arizona, Native Americans have the highest rates of the disease, followed by blacks and Hispanics. More than 19% of adult Native Americans in the state have been diagnosed, the Arizona Department of Health Services reports.

Type 1 diabetes is a condition in which the body does not produce any insulin, which helps regulate blood sugar. In the more common type 2 diabetes, the body produces insulin but does not use it properly. Some people only need to maintain a healthy diet and exercise regimen to manage the disease, while others might need insulin injections or other medicines.

In order to properly regulate their blood sugar, diabetics are cautioned against eating foods high in processed sugar, such as white bread, sugary cereals and flavored yogurt and drinks. Hill told participants they should not be afraid to eat the natural sugar found in whole fruits.

Glorene Barton learned about Food for Thought from her health care providers during a recent appointment at Native Health.

“I was asking about snacks, because I’m a diabetic and I forgot to bring a snack with me. So she told me about this class that might be interesting for me,” Barton said. “I learned a few different things about eating and grams and carbs and things of that nature. It was interesting.”

Another participant, Marla Wilson, said her son motivates her to keep up with a healthy diet. She thought this program was a great opportunity to learn how.

“I have a son who’s very health-conscious. So I’m sure he’ll like it, too, because we were just talking about eating more salads and the health benefit,” Wilson said.

Hill kicked off the morning by providing some tips about managing diabetes. Participants learned they can test their bodies’ reaction to new foods by trying them over a few days, then checking their blood sugar levels two hours later each time.

Then it was time to get cooking. Smith guided the group through the process of making the salad, explaining some basic knife work, how to substitute in healthy ingredients and portioning.

The ingredient that surprised people the most was nonfat yogurt, which was used along with lemon juice to dress the salad. Smith said yogurt is an excellent substitute for less healthful ingredients, such as sour cream.

At the end, participants were able to take home both dry goods and fresh produce funded by the Mobilize AZ project from Blue Cross Blue Shield of Arizona.

“Being diabetic is a very expensive way of being, and so this is a plus,” Wilson said. “We get what we need to make our dinner tonight.”

Added Barton: “It’s the learning that’s more important to me. … I’m tired of eating the same thing all the time, so this is great.”