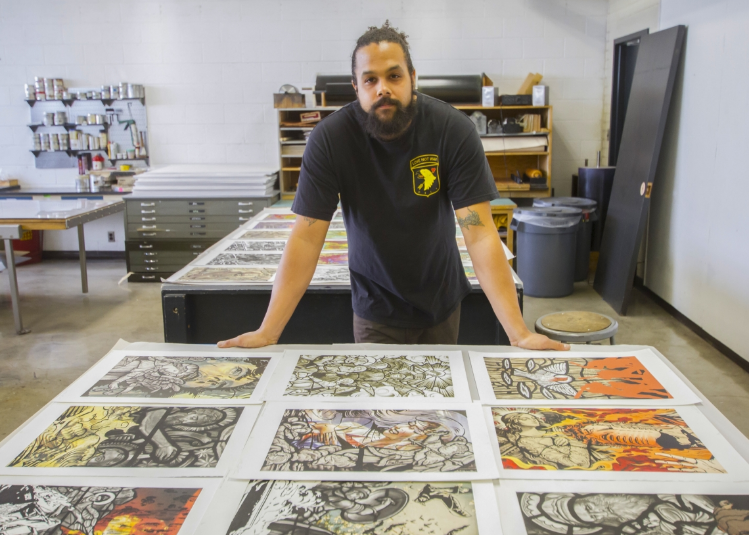 Aaron Coleman with some of his work at the UA School of Art's print shop. (Photo by Kyle Mittan/University Communications) 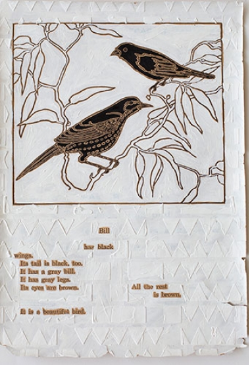 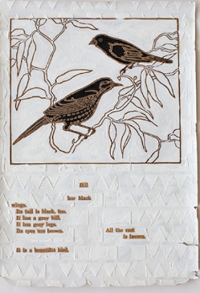 Aaron Coleman turned pages of a 1950 coloring book into messages about race in his "True and Livin'" collection. 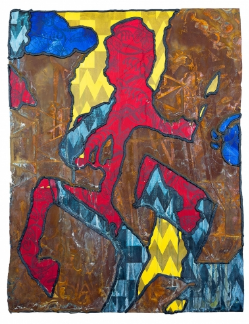 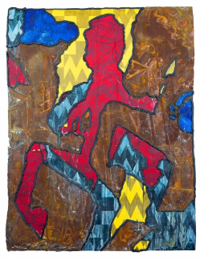 TUCSON -- Aaron Coleman, an assistant professor in the University of Arizona School of Art, has found a simple and seemingly innocent medium to communicate his thoughts on race: a children's coloring book from 1950.

The book tells the story of two children learning about colors through a series of activities over the course of a year. However, Coleman says, all of the children in the book are white, leaving children with a skewed view of reality.

"A child who sees this book is subconsciously being told that if you're going to see a depiction of a person, it's going to be a white person," Coleman said. "That means the way this child is learning about color is through the lens of someone who is white. There are no other perspectives being presented."

Coleman says the coloring book gives him a way to talk about how we perceive and use color. He paints directly onto the pages, covering up parts of the image and text to leave a poem or other message pertaining to color. The paintings are part of a collection called "True and Livin'." The pieces show how Coleman's work has evolved over the years.

From Street Art to Art School

Coleman began finding his artistic voice on the streets of Washington, D.C., and later Indianapolis by "re-appropriating the landscape" – spray painting block-letter graffiti and murals on bridges, billboards, trains and anything else that might provide a canvas. Although he avoided brushes with the law, Coleman ultimately decided he needed to find a "more responsible way" to create art.

He attended the Herron School of Art and Design at Indiana University – Purdue University Indianapolis and spent some time working in graphic design and painting before finding his true passion: printmaking. His early work explored human interaction with technology, and featured imagery of machines protruding from living characters. Some of his later work merges comic book-style art with religious imagery found on stained-glass windows.

Coleman says joining academia allowed him to provide the kind of guidance to students that he wished he had when he was their age. He held positions at Northern Illinois University, Elgin Community College in Elgin, Illinois, and California State University in Fresno before joining UArizona as an assistant professor in fall 2016.

Black History Month and Beyond

While racial issues are consistently at the center of Coleman's work, he says Black History Month provides increased opportunities and exposure for Black artists. He says the social unrest surrounding civil rights this year has provided a "flood of opportunities" for Black artists and others from underrepresented populations.

"The whole world is sharing the opportunities that used to be closed off," Coleman said. "Now is the time to push your work if you're a person of color or from another underrepresented community, because people are ready to listen and ready to support in ways that they never were before."

"It is crucial that we do not forget where we come from, as it is the only way to pave a new path forward," Coleman's exhibition statement says. "That path, laden with a knowledge of the past, produces empathy, understanding and trust."

Coleman's work also has been displayed at the University of Colorado, Wichita State University, the Ino-cho Paper Museum of Art in Kochi, Japan, and the Yekaterinburg Museum of Fine Arts in Yekaterinburg, Russia. You can see some of his art in this online gallery.

Andy Ober is assistant director for news at University Communications at the University of Arizona. He can be reached at andyober@arizona.edu or 520-621-9017.