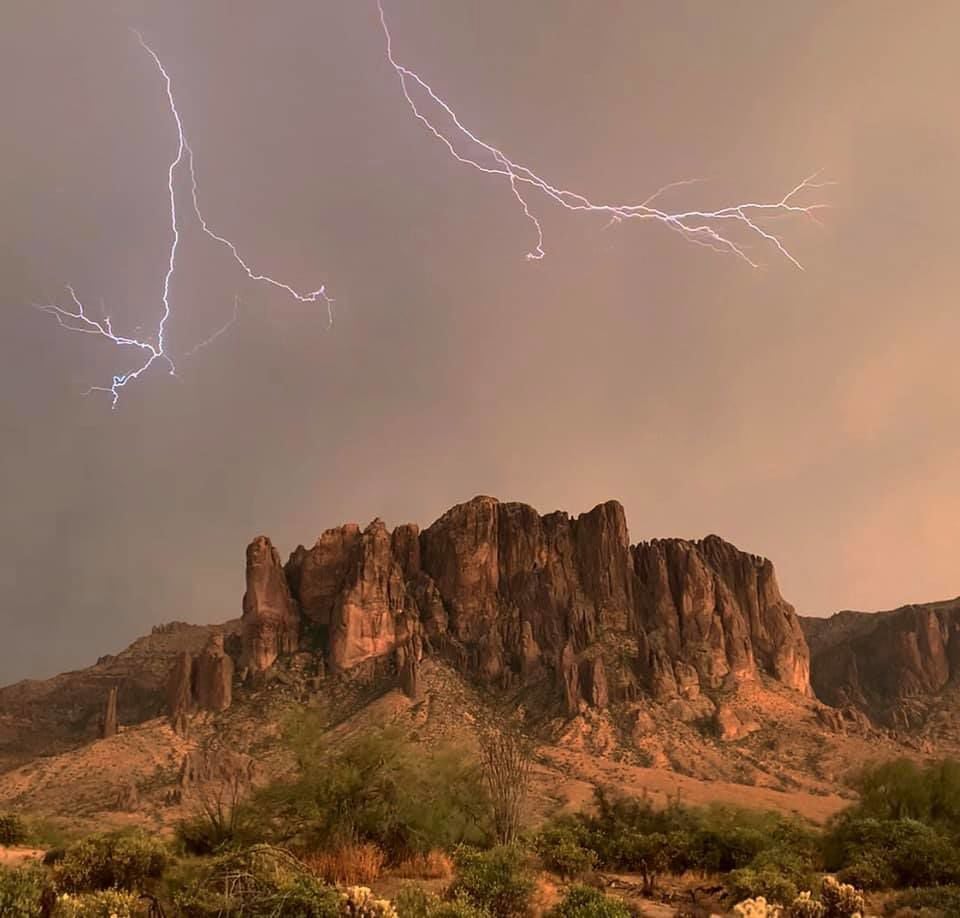 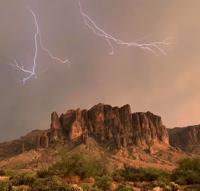 A Halloween event will focus on the scary stories and legends that surround the Superstition Mountains. 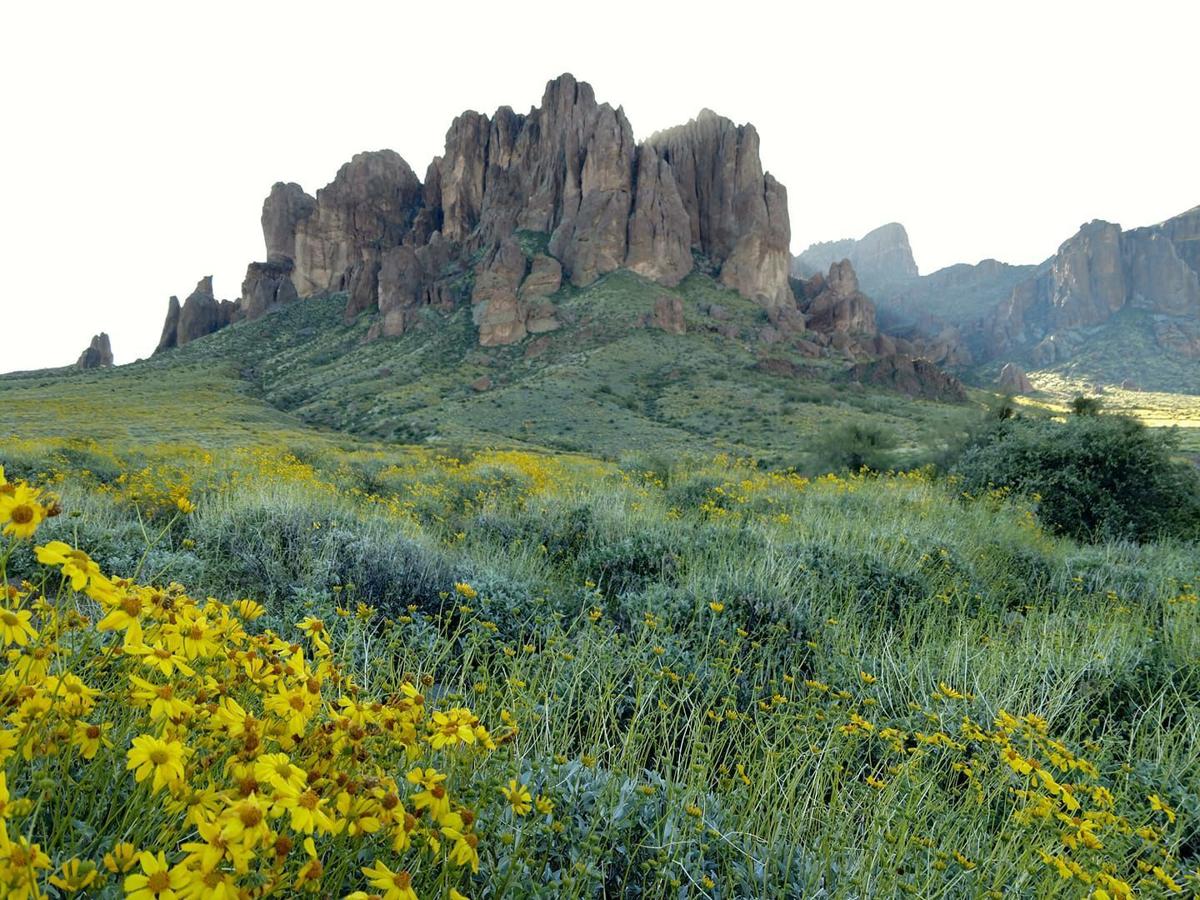 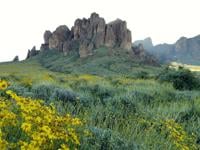 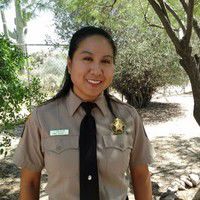 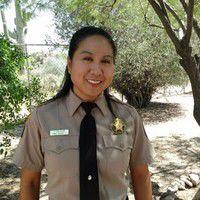 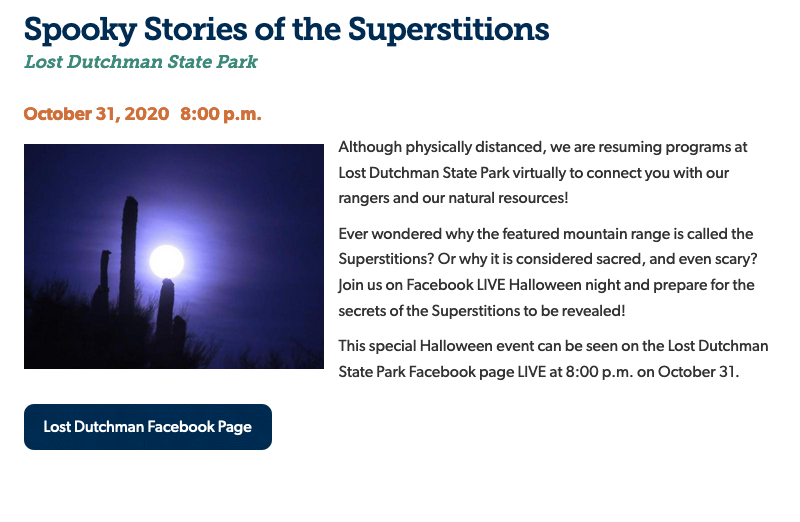 A Halloween event will focus on the scary stories and legends that surround the Superstition Mountains.

APACHE JUNCTION — Long before the story of the Lost Dutchman was formed, an ancient Pima legend told tales of people being turned to stone formations in what now are known as the Superstition Mountains.

Legends, lore and scary tales abound in the aptly named Superstition Mountains and an upcoming event, “Spooky Stories of the Superstitions,” aims to highlight some of myths and stories that have been told about the mountains.

“Spooky Stories of the Superstitions” is a virtual event on Facebook Live that begins at 8 p.m. on Halloween, Oct. 31.

The event will answer such questions as:

“Attendees will learn some of the superstitions, legends and history of the famed mountain (range) with its legendary hidden treasures,” said Jackie Vallejos, assistant manager at Lost Dutchman State Park. “The Superstitions stand out for their beauty, but also for the beliefs that (the mountain range) is cursed with mysterious deaths and disappearances.”

The virtual event was adapted from a formerly in-person event.

“This is the first time we’ve held the virtual event,” Vallejos said.

“Spooky Stories of the Superstitions” is about 20 minutes long. It’s narrated by Vallejos, who has been a ranger at the state park for about four years.

“My favorite story that’s told is an old Pima legend referencing the ‘stone people’ (hoodoos, or spires) above the Flatiron, because it is relatable and strikes a personal emotional chord — although I think the audience enjoys more the story about the Lost Dutchman gold,” Vallejos said.

The story of the Lost Dutchman’s gold has been the subject of several books, movies and fireside storytelling sessions.

The story begins in the 1840s when the Peralta family of northern Mexico reportedly developed rich and a profitable gold mine in the Superstitions. During their last trip to take gold back to Mexico in 1848, all but two members of the family reportedly were killed in a section of the mountains now known as “Massacre Grounds.”

The two who returned to Mexico told stories of the profitable mine and its location. Over the years, some alleged maps have surfaced but were later lost.

About 30 years later, in the 1870s, German immigrant Jacob Waltz, “the Dutchman,” reportedly found the mine with the assistance of a Peralta family member.

He and a partner are said to have worked the mine, then hiding one or more caches of gold somewhere in the mountain range.

Before his death in 1891, he reportedly told a neighbor where the mine was located but neither she nor the many others who searched for the gold were ever able to find it — and some met untimely deaths in their search for the hidden riches.

Vallejos said such stories have added to the lore of the mountains for decades.

The Halloween night event is designed for adults but is suitable for some children.

“Although it has been planned with a broader audience in mind — not just adults — we advise parents to watch first to make their decision on its suitability for children as it is not rated,” she said. The narrated portion of the live event will be followed by a question-and-answer session.

The Superstition Mountain range was formed about 15 million to 20 million years ago. Thousands of people visit every year.

“It is a favorite hiking spot, and the Lost Dutchman State Park makes it accessible to visitors with camping, picnic and day use areas,” Vallejos said.

The park has several trails that lead into the Superstition Mountains, including Siphon Draw Trail, which takes adventurous hikers to the top of the Flatiron section of the mountains.

To tune in to the Halloween event, visit the park’s Facebook page, found under Lost Dutchman State Park.