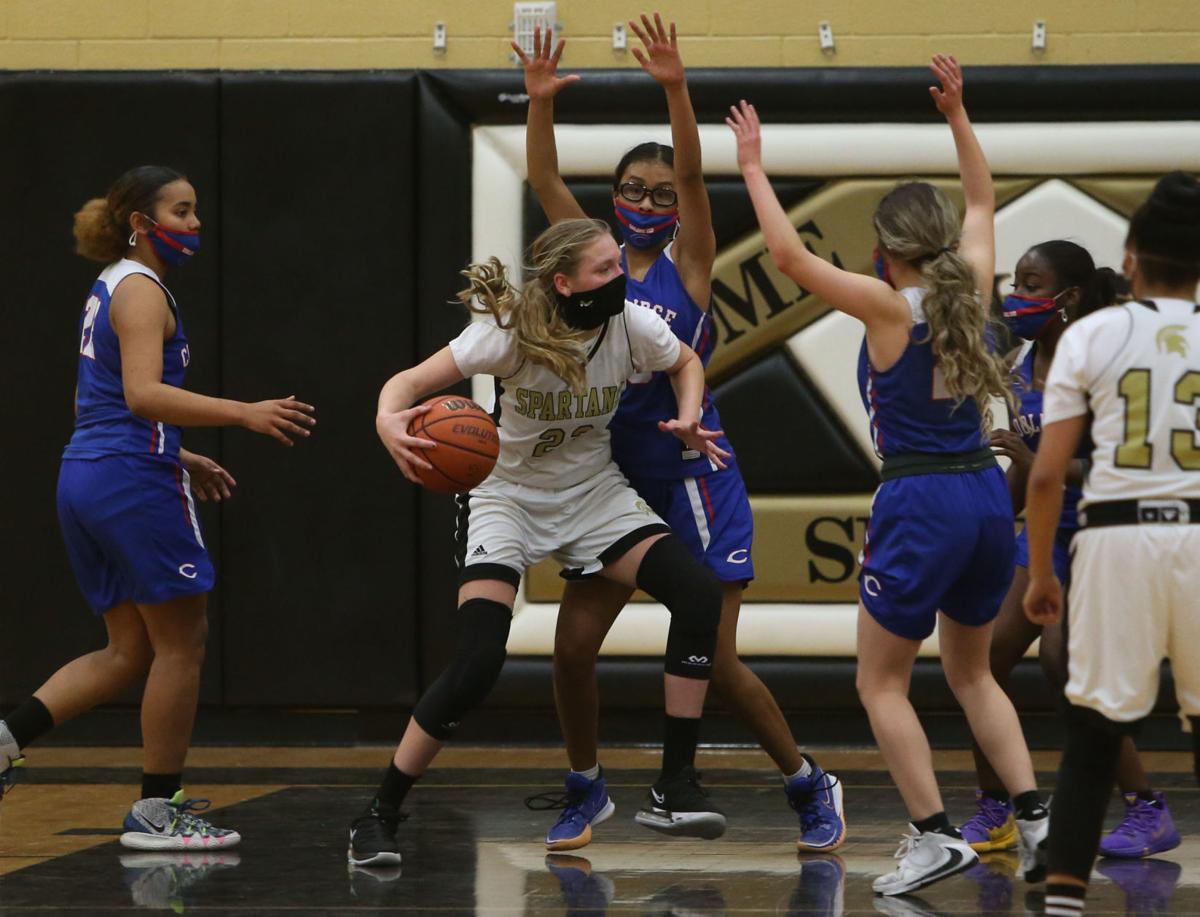 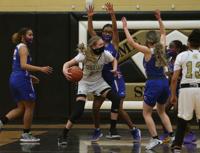 Vista Grande’s Jayla Scott works her way toward the basket against Coolidge’s Brooklyn Pablo on March 3 in Casa Grande. 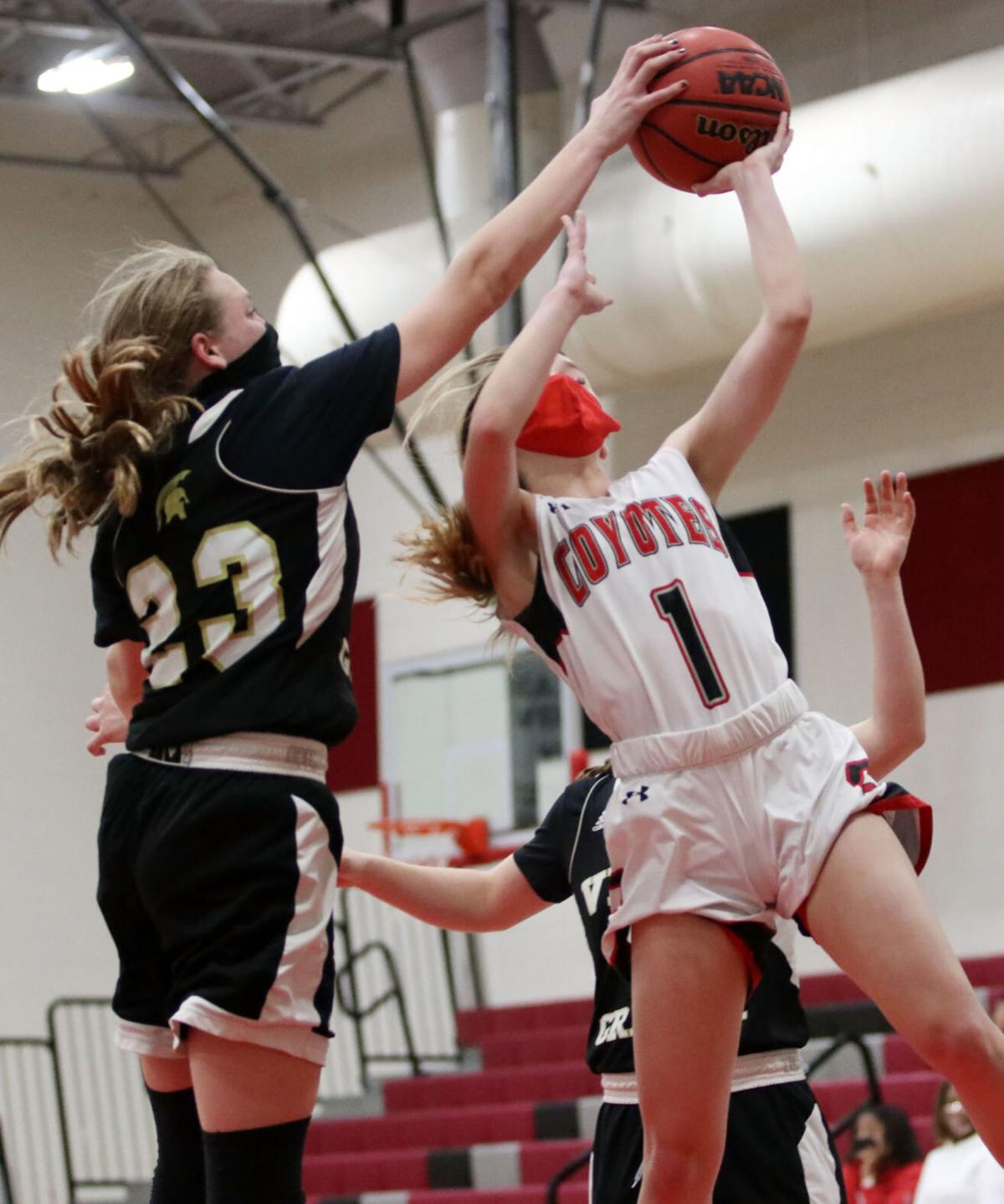 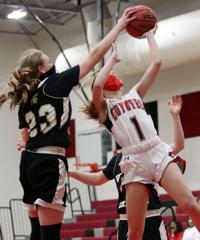 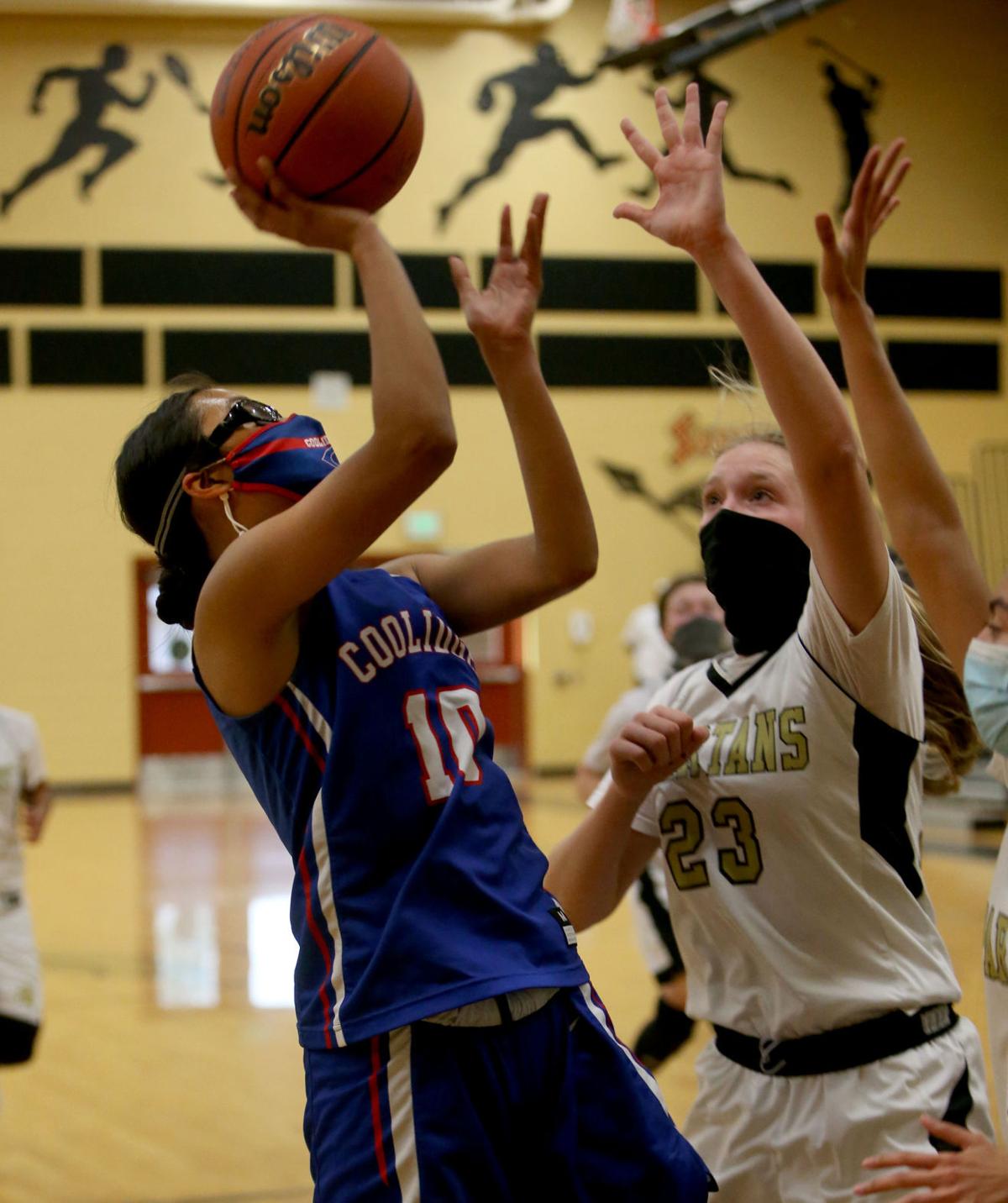 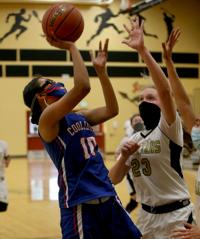 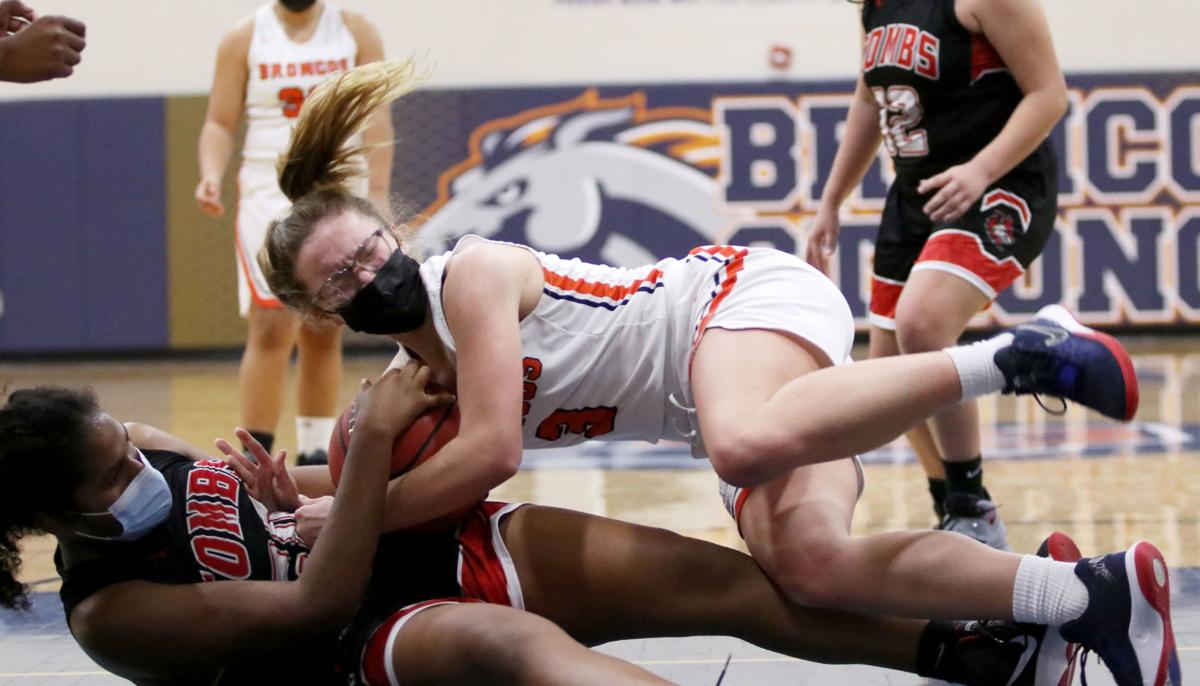 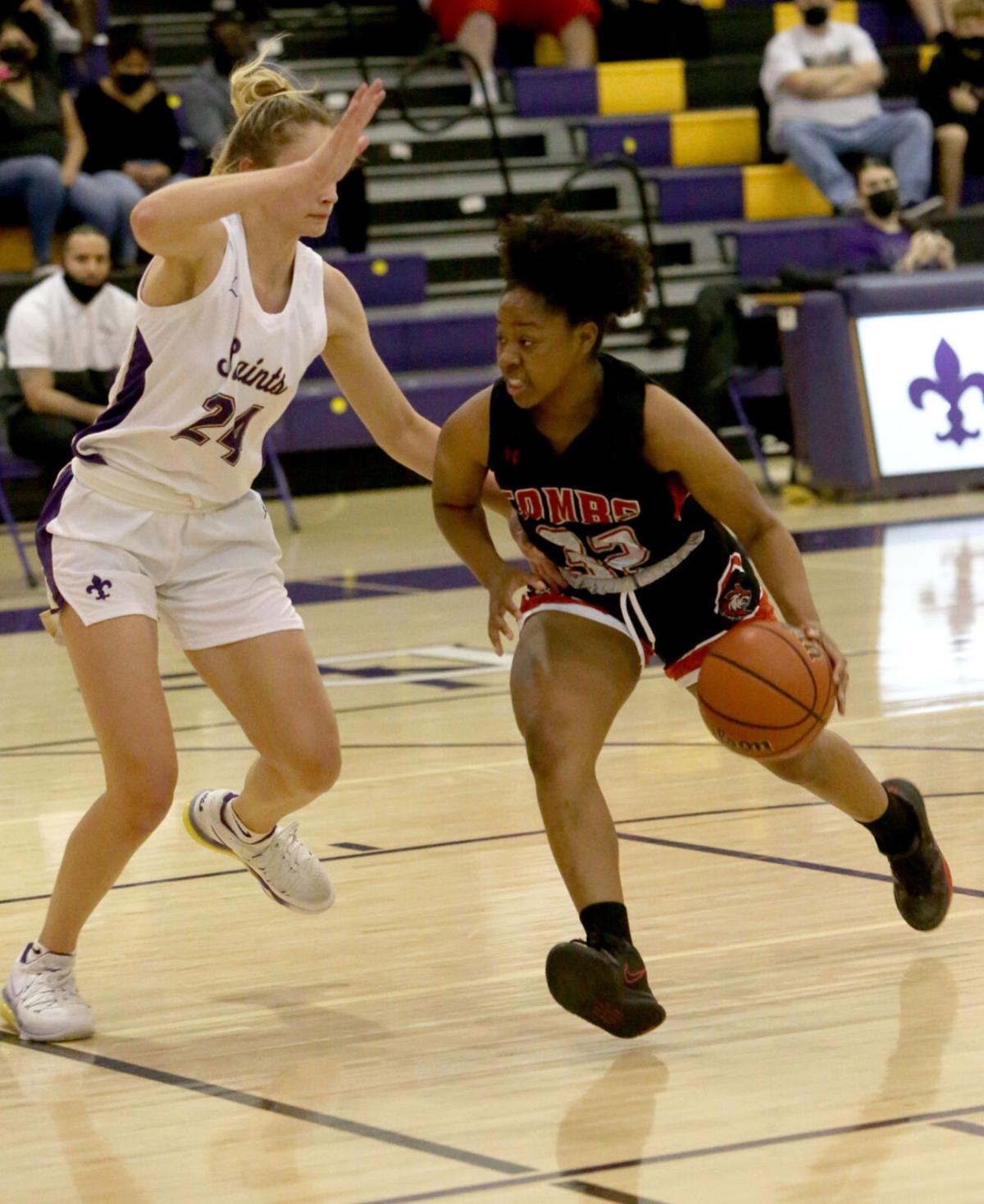 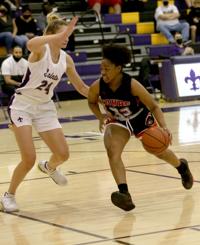 Combs senior Londyn Cunningham drives to the basket while being defended by Notre Dame Prep's Alivia Pautz during a 4A state playoff game March 9 in Scottsdale. 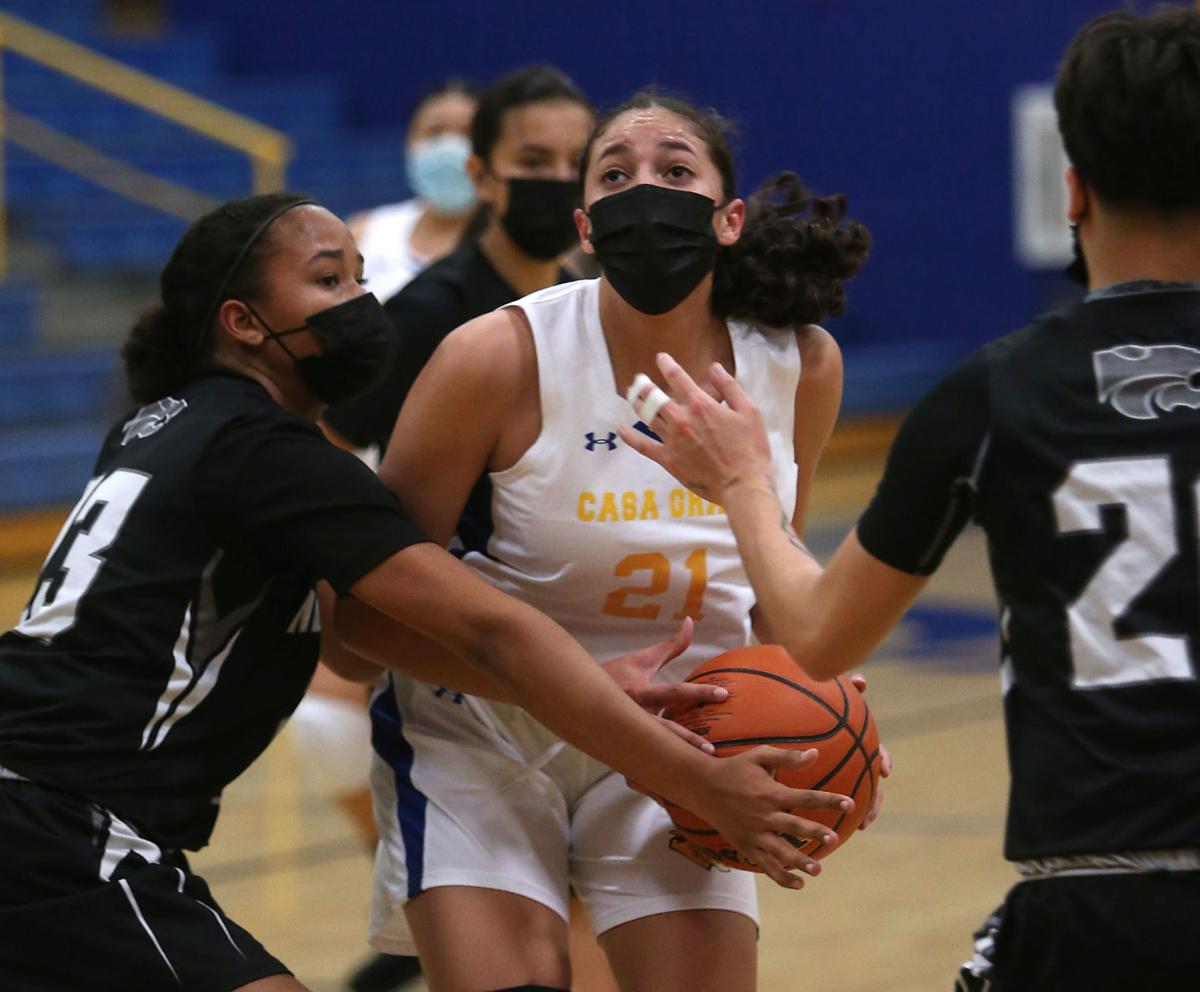 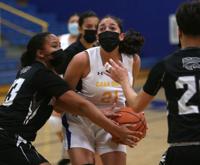 Casa Grande junior Aliyah Robbins is swarmed by Marana Mountain View defenders as she drives to the basket Jan. 29 at Jack Splisbury Gym in Casa Grande.

Vista Grande’s Jayla Scott works her way toward the basket against Coolidge’s Brooklyn Pablo on March 3 in Casa Grande.

Combs senior Londyn Cunningham drives to the basket while being defended by Notre Dame Prep's Alivia Pautz during a 4A state playoff game March 9 in Scottsdale.

Casa Grande junior Aliyah Robbins is swarmed by Marana Mountain View defenders as she drives to the basket Jan. 29 at Jack Splisbury Gym in Casa Grande.

CASA GRANDE — The future of Pinal County girls basketball is in good hands.

Four of the five positions on the PinalCentral Girls Basketball All-County Team’s first team are filled by players who will return next season, and that includes Vista Grande junior Jayla Scott.

Displaying an uncommon skill set for someone her height, the 6-foot-1 center can handle the ball, pass and shoot. And she uses her size exceptionally well to rebound and play defense.

Scott’s all-around game and dominance make her the PinalCentral Girls Basketball Player of the Year.

In the pandemic-shortened 2021 season, Scott averaged 20.4 points, 12.6 rebounds and 4.5 blocks while playing all 15 games for the Spartans. She ranked fifth in 4A in scoring, sixth in 4A in rebounding and fourth in the state — regardless of classification — in blocks.

Runner-up for Player of the Year goes to Coolidge junior guard Brooklyn Pablo, who did significant heavy lifting for the Bears. She ranked second in the entire state in blocks (first among schools 2A and larger) at 5.1 per game and is an intimidating defensive presence.

Joining Scott and Pablo on the all-county first team are guards Adriana Bachman of Poston Butte and Londyn Cunningham of Combs and forward Aliyah Robbins of Casa Grande Union.

Just a sophomore, Bachman is the youngest player on the all-county first or second team. Known for locking down whoever she is guarding, Bachman was named the 4A Black Canyon Defensive Player of the Year. She led the Broncos in scoring with 13.3 points per game while also averaging 5.5 rebounds, 3.2 assists and 5.4 steals (third in 4A).

Cunningham, the only senior on the first team, was a leader and floor general for the Coyotes (13-4). She led her team into the 4A state playoffs, just as Bachman did with the Broncos (13-6). Cunningham averaged 11.1 points, 4.4 rebounds, 4.2 assists and 3.2 steals.

Rounding out the first team is Robbins, a junior and an imposing athletic presence for the Cougars. With 11.9 points and 10.4 rebounds per game, the 5-foot-11 forward collected eight double-doubles in 14 total games. She was a first team all-region selection in the 5A Sonoran and tied for seventh in 5A in rebounding.

The all-county second team includes guards Brooke Smith of Maricopa, Lili Ramos of Florence and Nei’Shae Clegg of Coolidge and forwards Acacia Melvin of Combs and Shakaiya Irving of Maricopa.

Smith was the beating heart of the Rams, playing on the varsity since her freshman year. Injuries limited her to 10 of Maricopa’s 17 games during her senior season, but she led the team in scoring and averaged 10.3 points, 3.7 rebounds and 1.8 steals while being named first team all-region in the 6A Desert Southwest. She has signed to play basketball at Chandler-Gilbert Community College.

Ramos, a feisty senior guard, was one of the biggest reasons why Florence returned to the 3A state playoffs. She was first team all-region in the 3A South Central and led the Gophers in scoring at 10.7 points per game while also averaging 4.1 rebounds and 2.9 steals.

Clegg, another senior, is headed to SAGU American Indian College in Phoenix to play basketball after displaying her defensive talents for the Bears all season. She averaged 7.4 points, 8.1 rebounds (11th in 3A) and 4.3 steals (seventh in 3A).

The only non-senior on the second team is Melvin, a junior. Her height and physical presence are key to the success of the Coyotes, and she will play an even bigger role next season. Averaging 11.5 points, she also hauled in 10.1 rebounds (13th in 4A), 2.5 blocks (ninth in 4A) and 2.4 steals per game.

Maricopa’s first season playing at the 6A level was a smooth transition for Irving, as the 5-foot-10 senior averaged 7.6 points, 7.8 rebounds, 2.2 steals and 1.1 blocks in 17 games for the Rams. She tied for eighth in 6A in rebounding and tied for seventh in 6A in blocks.

See below for the complete all-county team, including honorable mention selections.