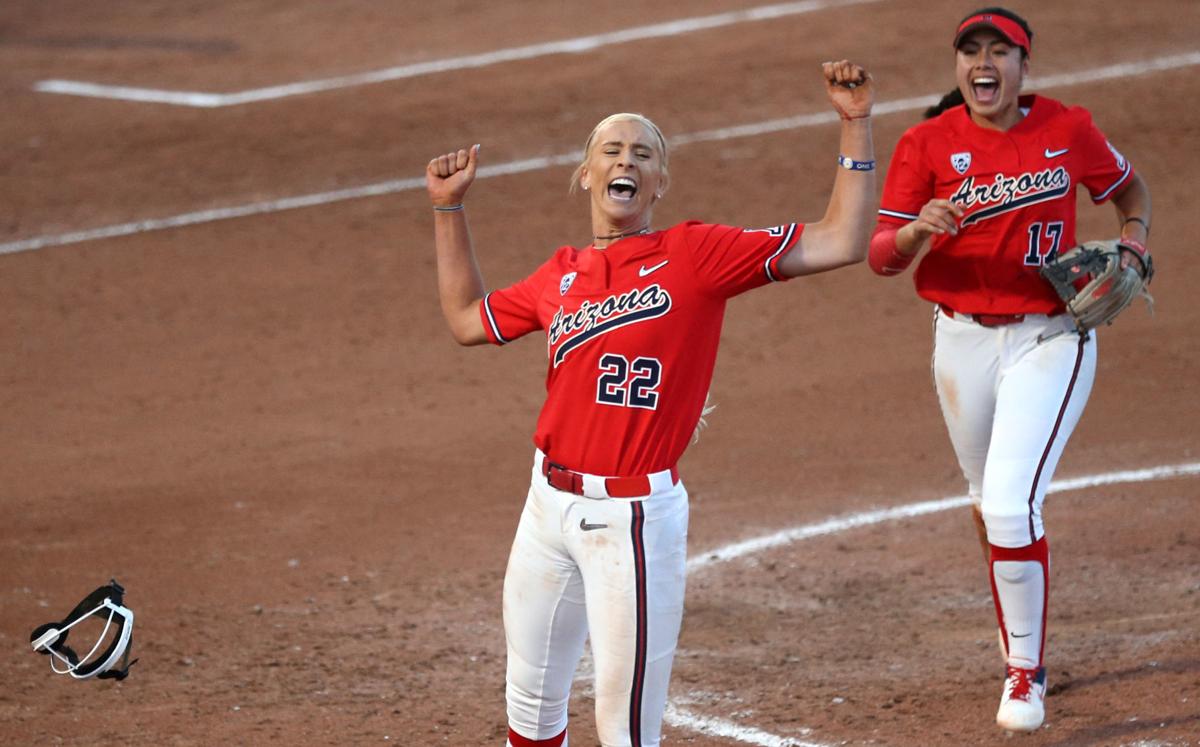 Arizona starting pitcher Alyssa Denham, left, tosses her facemask as third baseman Malia Martinez runs in after the final out in the Wildcats’ 9-1 win over Ole Miss in Game 2 of the Tucson Super Regional last May 25 at Hillenbrand Stadium in Tucson. The Wildcats swept the series to advance to the Women’s College World Series. 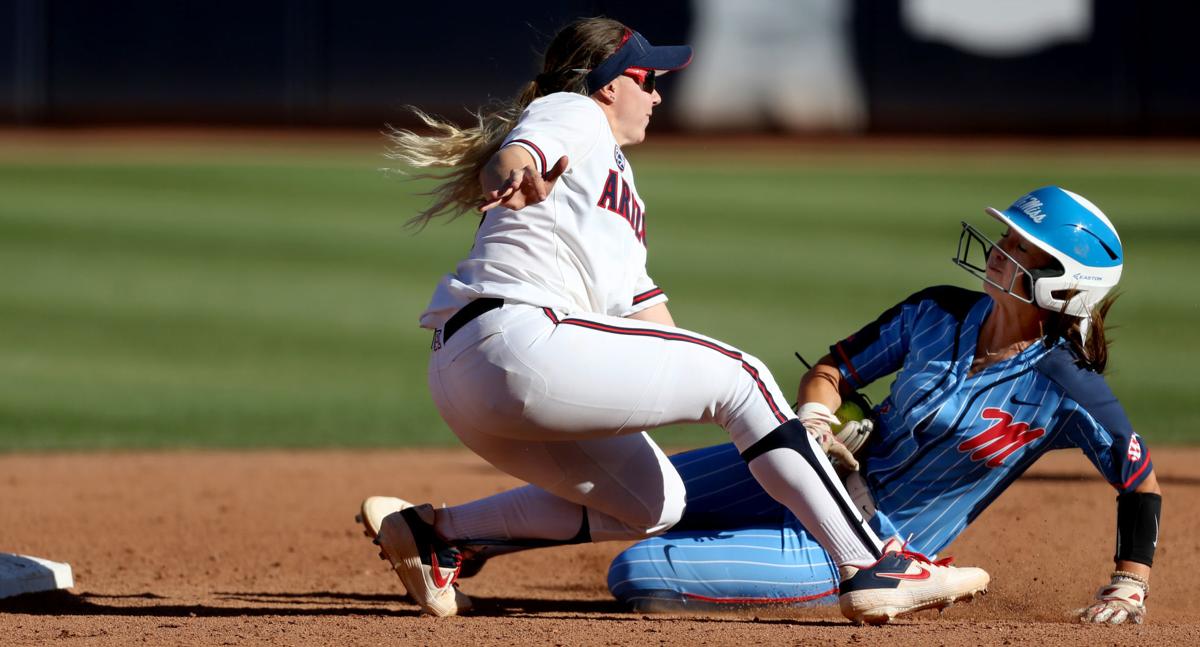 Arizona shortstop Jessie Harper applies the tag on Ole Miss baserunner Kaylee Horton on her steal attempt during the third inning of an NCAA Super Regional game May 24 at Hillenbrand Stadium in Tucson.

Arizona starting pitcher Alyssa Denham, left, tosses her facemask as third baseman Malia Martinez runs in after the final out in the Wildcats’ 9-1 win over Ole Miss in Game 2 of the Tucson Super Regional last May 25 at Hillenbrand Stadium in Tucson. The Wildcats swept the series to advance to the Women’s College World Series.

Arizona shortstop Jessie Harper applies the tag on Ole Miss baserunner Kaylee Horton on her steal attempt during the third inning of an NCAA Super Regional game May 24 at Hillenbrand Stadium in Tucson.

TUCSON — Last May, University of Arizona junior pitcher Alyssa Denham tossed her 100th pitch of the game as the ball came off the bat of Ole Miss’ Abbey Latham. It was a grounder to second baseman Hanah Bowen, who easily fielded the ball and threw to first for the final out.

The Wildcats bench cleared and gathered around Denham to celebrate the softball program’s return to the Women’s College World Series in Oklahoma City for the first time since 2010.

Fast forward to March 2020, and the fourth-ranked team in the country was riding an 11-game win streak with a 22-3 record, and a big reason for the Wildcats’ early season success was their senior class.

Would this be the UA softball team that goes all the way and wins the ninth national championship in program history? On an individual scale, would shortstop Jessie Harper break the all-time NCAA record for most career home runs?

The answer to those questions will have to wait until next season, after the COVID-19 pandemic led to the cancellation of the remainder of the 2020 season. The NCAA granted all spring athletes an additional year of eligibility, and all six Wildcats seniors have decided to return next season.

“This class has done a tremendous job both on the field and in the classroom and have represented this program and university with high character and tremendous class,” Arizona coach Mike Candrea said in a statement. “I cannot think of a group that is any more deserving of this opportunity to end their careers the right way.”

Palomino-Cardoza, who has been through two ACL surgeries and was dubbed the great-grandma of the team as she will enter her sixth season with the Wildcats, she said it was an instant yes on her decision to return.

“I’ve talked to other people who are in my position with knee injuries,” she said. “It is hard, there’s a lot of pain and mental stuff that goes into it, but I started something in an Arizona uniform and I want to finish it the way I want to. Playing four years and finishing four years is the goal, and in a heartbeat it was easy to say yes because I want to finish out with this team and this class, and see what this team can do.”

Denham admitted that she had done some thinking about her decision before the NCAA granted the additional year of eligibility.

She told PinalCentral she was initially shocked when the season was canceled. In that moment Denham also thought her college career was over because she had never heard of anything like this happening.

“I didn’t know (coming back) was a possibility; coach talked to us said there was a chance, and that instilled a little bit of hope back in me,” she said. “I think that’s what really got me through it, is having that slight opportunity to be able to return. So right when they said we could come back, I was super excited.”

Despite a shortened season, the Wildcats defeated some of college softball’s best teams and also had a memorable experience when they hosted Team USA in an exhibition match.

“Everybody was kind of coming together, our team chemistry was really great,” Denham said. “We were working super hard, I know all of our performances were just finally coming together, and I think that was what was most upsetting, we were having so much fun. We were doing really well, and when you’re having fun and doing really well, it sucks for everything to end.”

Denham added the Wildcats also had extra motivation to get back to the WCWS this year.

““I think us getting to go and experience that awesome opportunity just kind of instilled that extra drive every single day because we knew what we wanted to get back to ... but our coaches would try to explain it to us,” she said.

“I mean it is no feeling that can be explained. So I think actually getting to go there and have the opportunity to play in Oklahoma City, it was just amazing, and we knew where we wanted to end up at the end of the year.”

Denham, Harper and Palomino-Cardoza are excited about getting back on the field, and all three are planning to enjoy every second.

“I’m excited to basically pick up where we left off,” Denham said. “I feel like not much is going to change. They always say play the game like it could be your last game, and now I feel like we have a whole other respect for that and I feel like every time we take the field it’s going to be like this is a privilege for us getting to come back and so we’re trying to make the most of it.”

While many might look back on this shortened season and wonder what if, there’s no doubt the 2021 season will be one to watch, especially for the Wildcats and this group of seniors who are already set on that mentality of not taking anything for granted and playing every game like it’s your last.

“My parents and my family have had a huge influence on me wanting to come back because when I first found out that we wouldn’t be able to play again, I instantly thought about not being able to play in front of them again and make them proud,” Harper said.

“It didn’t really have anything to do with the whole home run thing. For me personally, it’s just playing in front of my family, in front of the fans and playing with my best friends and just really finishing what we started. This has taught us (to) never take anything for granted, to really take pride in putting on that uniform, and it’ll give us another sense of pride when it comes it wearing the ‘A’.”