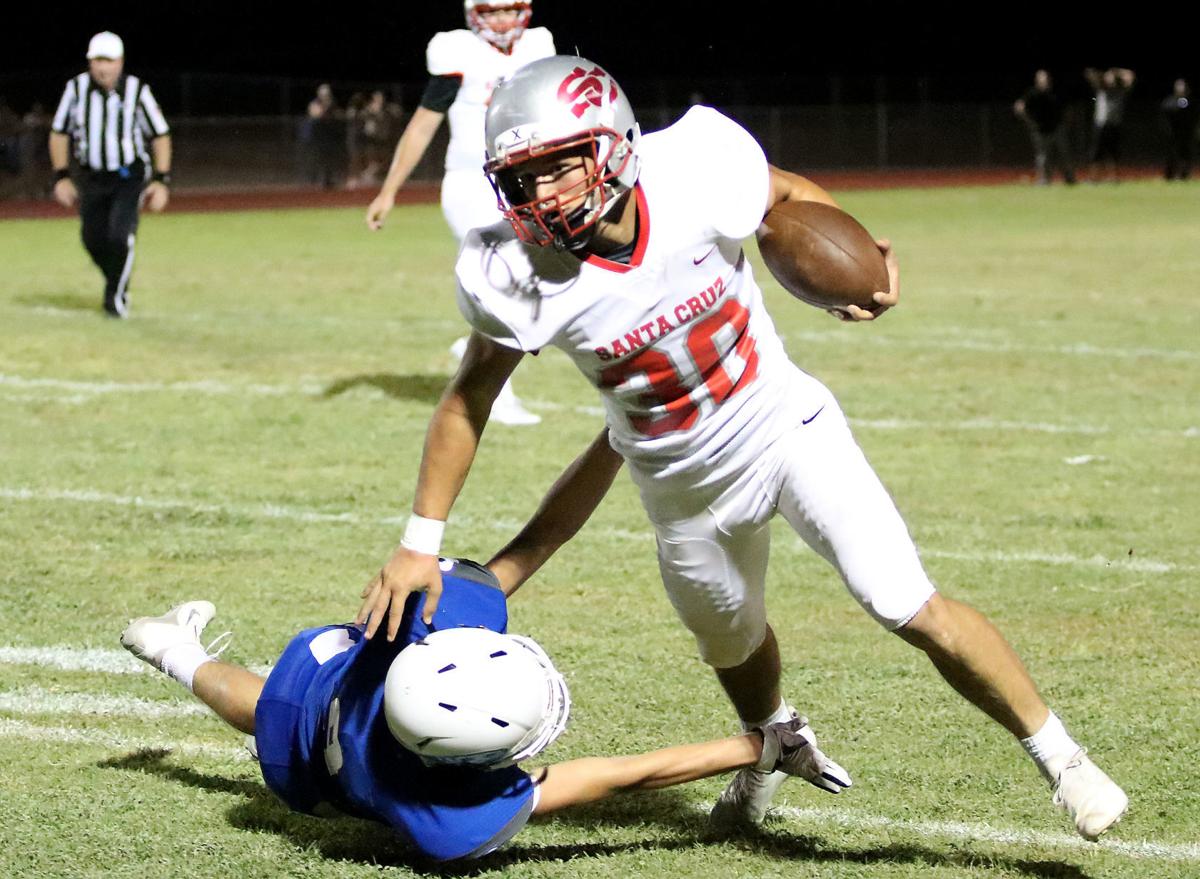 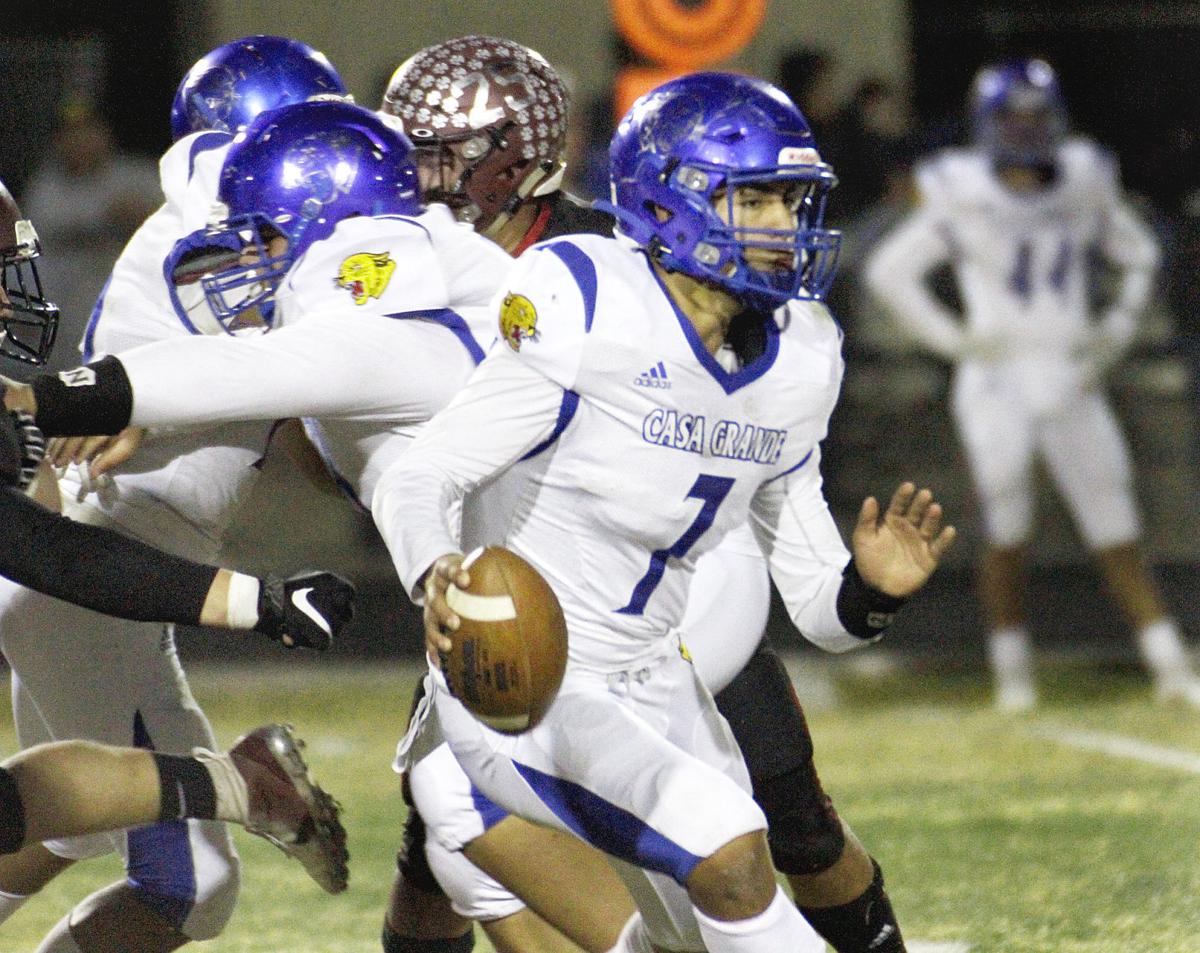 Casa Grande QB Angel Flores runs the ball in a 4A first-round playoff game against Sahuarita Walden Grove on Nov. 8 in Sahuarita.

Casa Grande QB Angel Flores runs the ball in a 4A first-round playoff game against Sahuarita Walden Grove on Nov. 8 in Sahuarita.

Ogle is a dominant running back and linebacker, and he even made first team all-region as a punter. The multifaceted junior is the PinalCentral Football Player of the Year.

Heading into Saturday’s 2A state semifinals, Ogle had 1,742 yards rushing and 21 touchdowns. He also led the Dust Devils with 83 tackles, in addition to his three sacks, five fumble recoveries and an interception.

Runner-up for Player of the Year goes to electric sophomore quarterback Angel Flores of Casa Grande. Flores led the Cougars to their first playoff win in 26 years and nearly guided the team to an upset win in the 4A state quarterfinals against Goodyear Desert Edge.

Flores completed 68.9% of his passes for 2,330 yards and 15 touchdowns with just six interceptions. He also rushed for 869 yards and 14 touchdowns, including six rushing TDs in two playoff games.

At the skill positions, the PinalCentral first team all-county selections include Zion Burns of Poston Butte and Ogle at running back, Cameron Garcia of Apache Junction and Joey Jensen of Combs at wide receiver, and Orlando Davis Jr. of Santa Cruz Valley at tight end.

Burns, a junior, shredded defenses for 1,542 yards and 20 touchdowns, averaging 171.3 yards per game. He also had 39 tackles and an interception while playing defensive back.

Garcia, a junior, put up some big numbers for the Prospectors, catching 48 passes for 836 yards and 11 touchdowns. Garcia’s speed is a major weapon for Apache Junction.

Jensen mainly played running back, but the junior caught 42 passes for 692 yards and seven scores. In addition to his receiving prowess, he rushed for 1,370 yards and 14 TDs.

Davis, also a junior, doesn’t have much of an opportunity to catch passes in a run-heavy offense, but heading into Saturday’s playoff game, he led the Dust Devils with 17 catches for 191 yards with two scores. And he helps pave the way for that dominant rushing attack.

On the defensive line, first-team selections include Jorge Aguilar of Casa Grande, Regen Terry of Florence and Ethan Wright of Apache Junction.

Aguilar, a senior, was the key up front to a very strong Cougars defense. He led the team with three sacks and also blocked a field goal at the buzzer to beat Oro Valley Canyon del Oro.

Terry, a senior with multiple Division I offers, had 70 tackles, including 10 tackles for a loss, for the Gophers. He also had four sacks and a forced fumble.

Wright was one of several defenders who wreaked havoc for the Prospectors, and he led the team with 66 tackles, including 19.5 stops behind the line of scrimmage and 10 sacks.

At linebacker, the first team is represented by Jake Thomas of Casa Grande, Anthony Valenzuela of Maricopa, Zachary Langenbach of Apache Junction and Malachi Rodriguez of Coolidge.

Thomas, a junior, was the man in the middle who anchored the Cougars defense. He led the team with 75 tackles in the regular season. Valenzuela had 50 tackles for the Rams and also tallied 14 tackles for a loss. The versatile senior added two sacks and two interceptions.

Langenbach, a senior, was the leader of a stout Apache Junction defense that at one point in October posted three consecutive shutouts. The 4A Black Canyon Defensive Player of the Year had 68 tackles, including 10 for a loss, and he picked off three passes.

Rodriguez, a junior, was a first team all-region selection in the 3A Central. He recorded 78 tackles to lead the Bears, and he also had six fumble recoveries and an interception.

Haman, a senior, is a true lockdown corner who can take a top receiver out of the game. He had three interceptions and also has the ability to blitz and deliver big hits.

Even in a defense that doesn’t face many big passing attacks, Calvin entered Saturday with a team-leading four interceptions for the Dust Devils. The sophomore also had six passes defended and two forced fumbles.

Velasquez, a senior, added to the deep and talented secondary for the Cougars. He had 36 tackles and two interceptions in the regular season.

Garcia, a junior, was a menace on the back end of the Rams defense. He led the team with 77 tackles and added eight passes defended and an interception.

Loggins, a senior, was a perfect 6-for-6 on field goals, including a long kick of 41 yards. He also hit 41 of 44 extra points and averaged 38.7 yards on kickoffs. Jurena, a sophomore, had one of the best punt averages in the state, averaging 39.5 yards with a season-long boot of 77 yards.

Brooks, a junior, was a field position weapon for the Broncos. He averaged 25.9 yards per kickoff return, including a 96-yard TD against Combs.