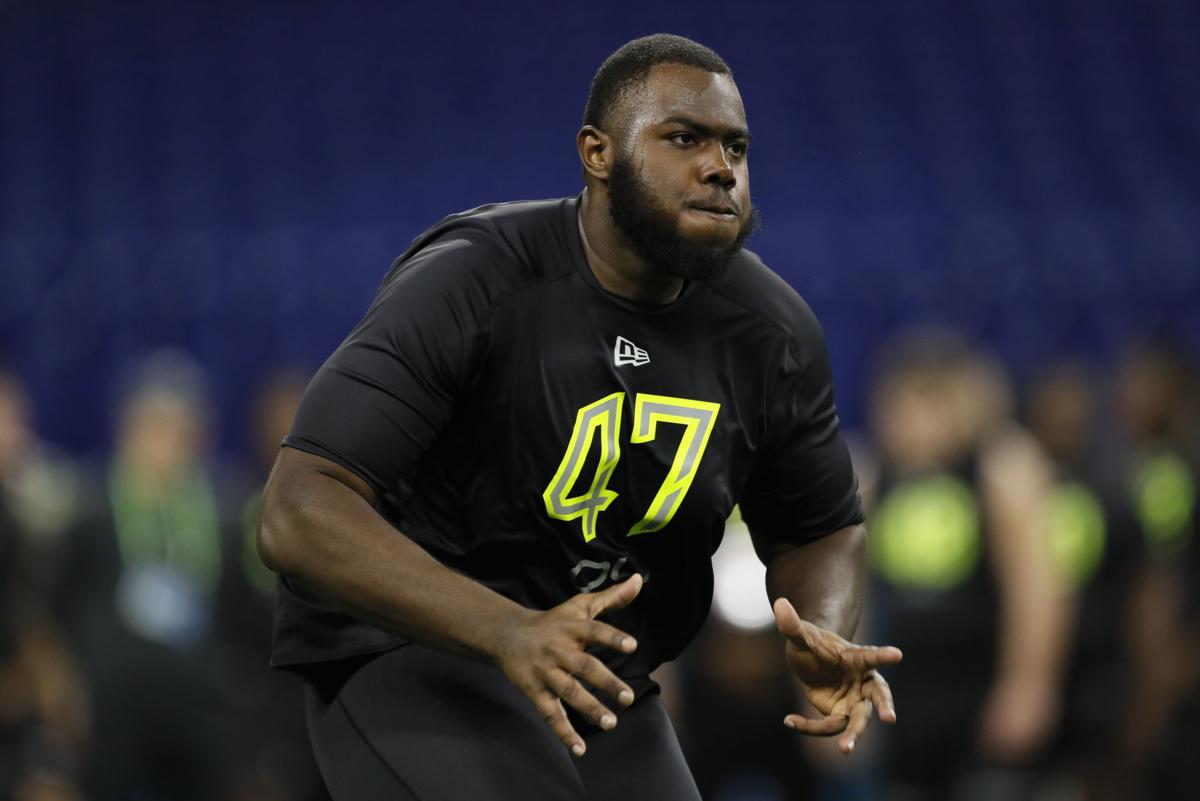 Georgia offensive lineman Andrew Thomas runs a drill at the NFL combine on Feb. 28 in Indianapolis. Thomas is considered a prime target for the Cardinals in the first round with their No. 8 overall pick. 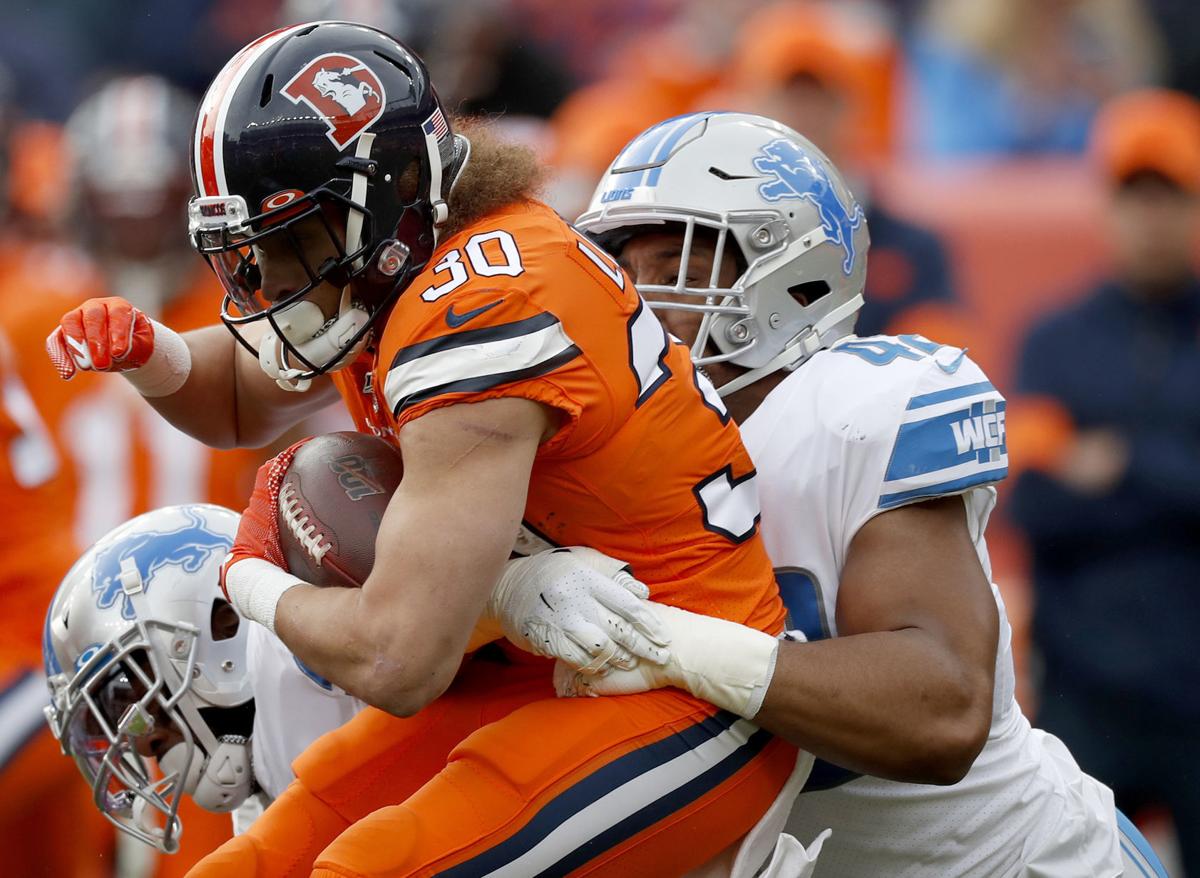 Denver Broncos running back Phillip Lindsay is tackled by Detroit Lions outside linebacker Devon Kennard during the first half Dec. 22 in Denver. The edge rusher had seven sacks in each of the past two seasons with the Lions and agreed to a three-year deal with the Cardinals on March 15.

Georgia offensive lineman Andrew Thomas runs a drill at the NFL combine on Feb. 28 in Indianapolis. Thomas is considered a prime target for the Cardinals in the first round with their No. 8 overall pick.

Denver Broncos running back Phillip Lindsay is tackled by Detroit Lions outside linebacker Devon Kennard during the first half Dec. 22 in Denver. The edge rusher had seven sacks in each of the past two seasons with the Lions and agreed to a three-year deal with the Cardinals on March 15.

Landing DeAndre Hopkins in a trade with the Houston Texans on March 16 was a monster acquisition for the Arizona Cardinals. Now that they have a star No. 1 receiver in the fold, they can focus on other needs in next month’s draft.

There’s no question that protecting Kyler Murray and getting him more weapons is a focal point. GM Steve Keim and the Cardinals front office got off to a great start in that regard by trading for Hopkins, arguably the best receiver in the NFL.

With Hopkins on the field, it moves Larry Fitzgerald to the No. 2 spot and Christian Kirk to the third option.

Perhaps Kirk, who played high school football at Scottsdale Saguaro, will thrive more in that role than he has as a No. 2 receiver in his first two seasons. That’s especially true because coach Kliff Kingsbury likes to run a lot of three-receiver sets, which should be beneficial to Kirk.

Here’s a look at some areas the Cardinals should address in the draft, which begins April 23.

The Cardinals offensive line has been one of the worst in the league in recent years. However, it wasn’t as bad as you might think in 2019.

Pro Football Focus put Arizona’s offensive line at No. 22 in its rankings. That may not seem like good news, until you consider the unit ranked dead last at No. 32 after the 2018 season.

The run blocking is still near the bottom of the league, but the pass blocking was good in Murray’s rookie season. Murray didn’t help himself much by holding onto the ball too long.

If the Cardinals do not re-sign center A.Q. Shipley, third-year pro Mason Cole is expected to take his place. Although he is entering his age 34 season, Keim would be wise to bring Shipley back.

The Cardinals have the No. 8 overall pick in the draft, and they should target a franchise left tackle. Depending on who is available, expect them to nab Georgia’s Andrew Thomas or Alabama’s Jedrick Wills Jr. with that first-round pick.

This has been a position of need for years. It may not be Kingsbury’s favorite position, but in today’s NFL, there are few positions more important to an offense’s success than tight end.

Arizona’s top tight end in receptions and yards last season was Charles Clay, who had just 18 catches and 237 yards with one touchdown. Clay is a free agent, but he’s heading into his age 31 season.

The Cardinals have just seven total draft picks, but they should take a mid-to-late round flier on a tight end who can make plays catching the ball.

Defense is where Arizona needs the most help, as it finished last in the NFL in yards allowed per game (402) and 28th in scoring defense (27.6 points).

With a ranking of 31st in passing yards allowed, the Cardinals need help in the secondary. They spent a second-round pick last year on CB Byron Murphy, but he allowed the second most receptions (70) of any corner in the league in 2019.

Arizona could go for a corner with its third-round pick (No. 72 overall) for someone to play opposite star veteran Patrick Peterson. Options include Jaylon Johnson of Utah and Damon Arnette of Ohio State.

Arizona ranked in the middle of the pack with 40 sacks, tied for 17th in the league. Outside linebacker Chandler Jones accounted for nearly half of those, as he had a career year with 19 sacks, in addition to eight forced fumbles. He is a bonafide stud, posting double-digit sack totals in all four of his seasons with the Cardinals.

But the NFL is all about having bookend pass rushers. Arizona needs someone who can line up on the opposite side of the field and create havoc for quarterbacks.

Adding Devon Kennard, a veteran who played at Phoenix Desert Vista in his high school days, in free agency was solid move. The Cardinals signed him to a three-year deal.

In addition to their third-round pick, the Cardinals also have two fourth-rounders (No. 114 and No. 131 overall). Edge rushers they could target with those picks include Jonathan Greenard of Florida, Khalid Kareem of Notre Dame and Kenny Willekes of Michigan State.