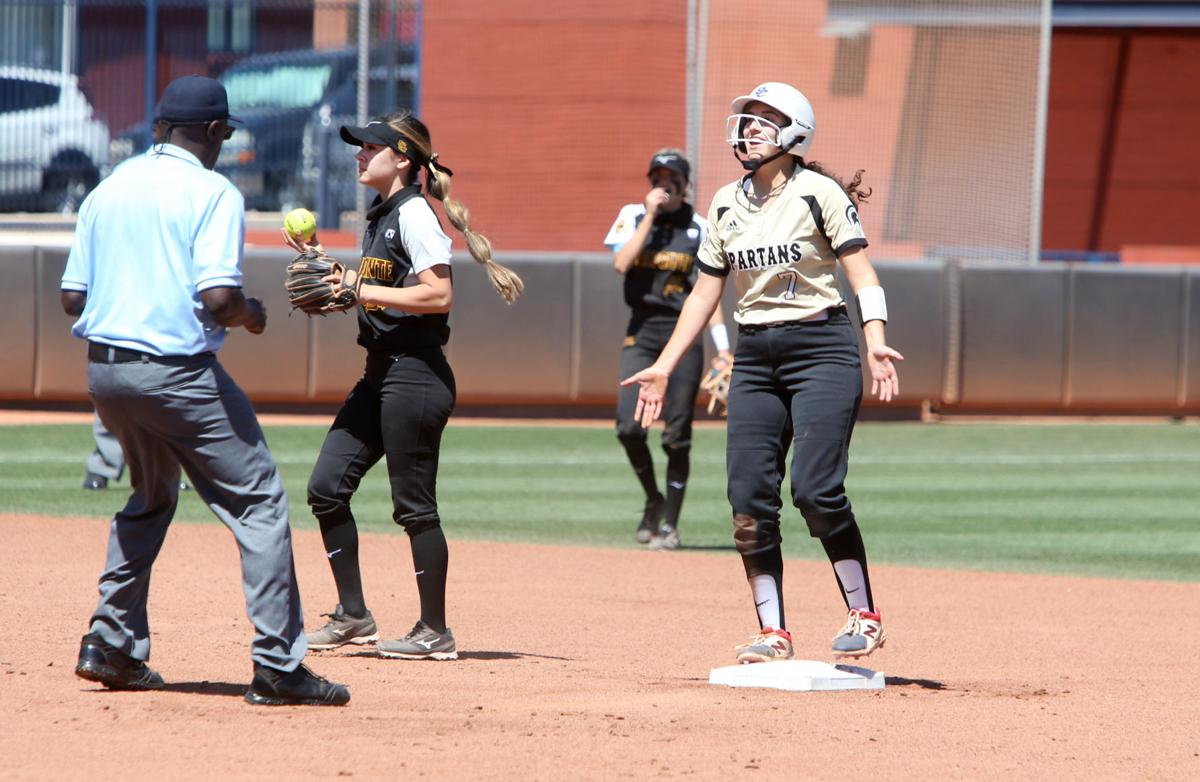 Vista Grande’s Bri Jorgensen encourages her teammates to get pumped up after she belted an RBI double against Tucson Salpointe Catholic during the 4A state championship game Monday at Hillenbrand Stadium in Tucson. 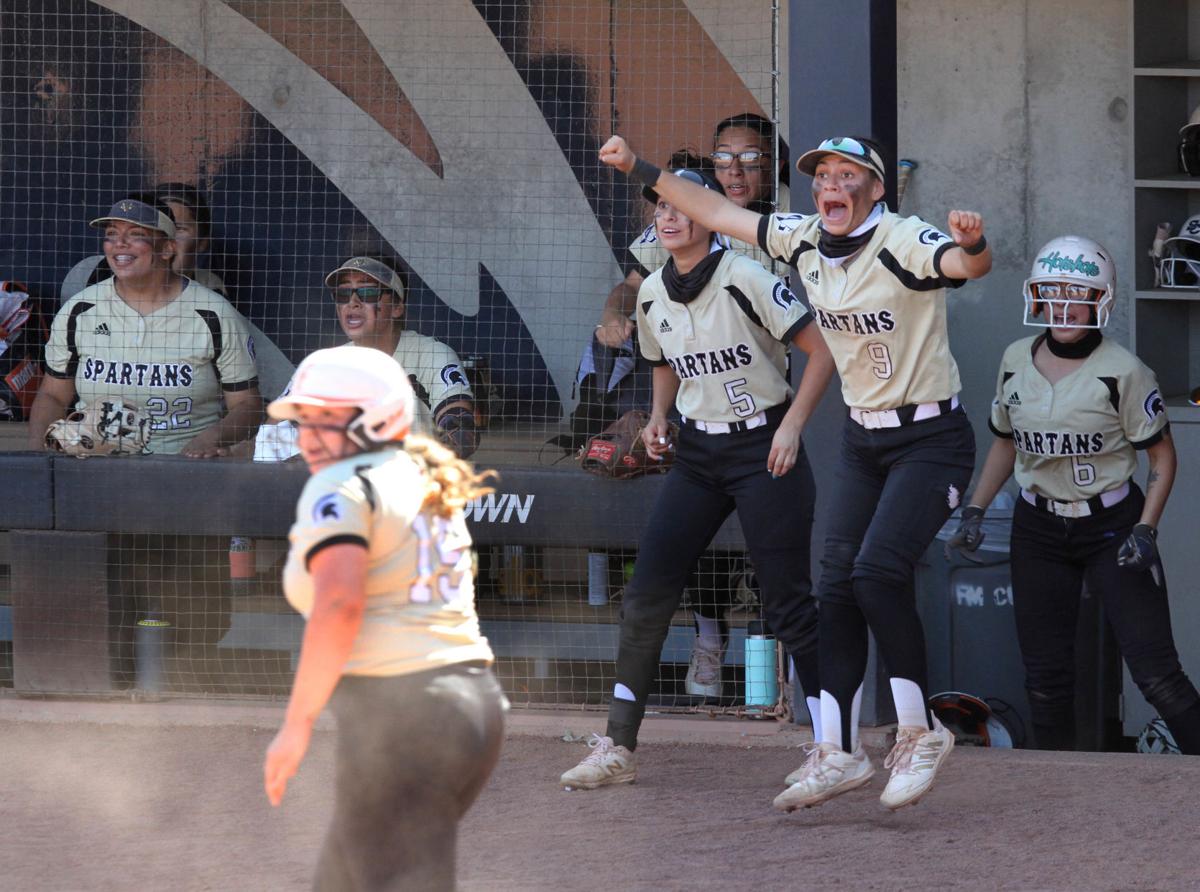 Vista Grande players react from the dugout after Adecelli Archuleta, 15, hits a two-run homer in the seventh inning against Tucson Salpointe Catholic during the 4A state championship game Monday at Hillenbrand Stadium in Tucson. 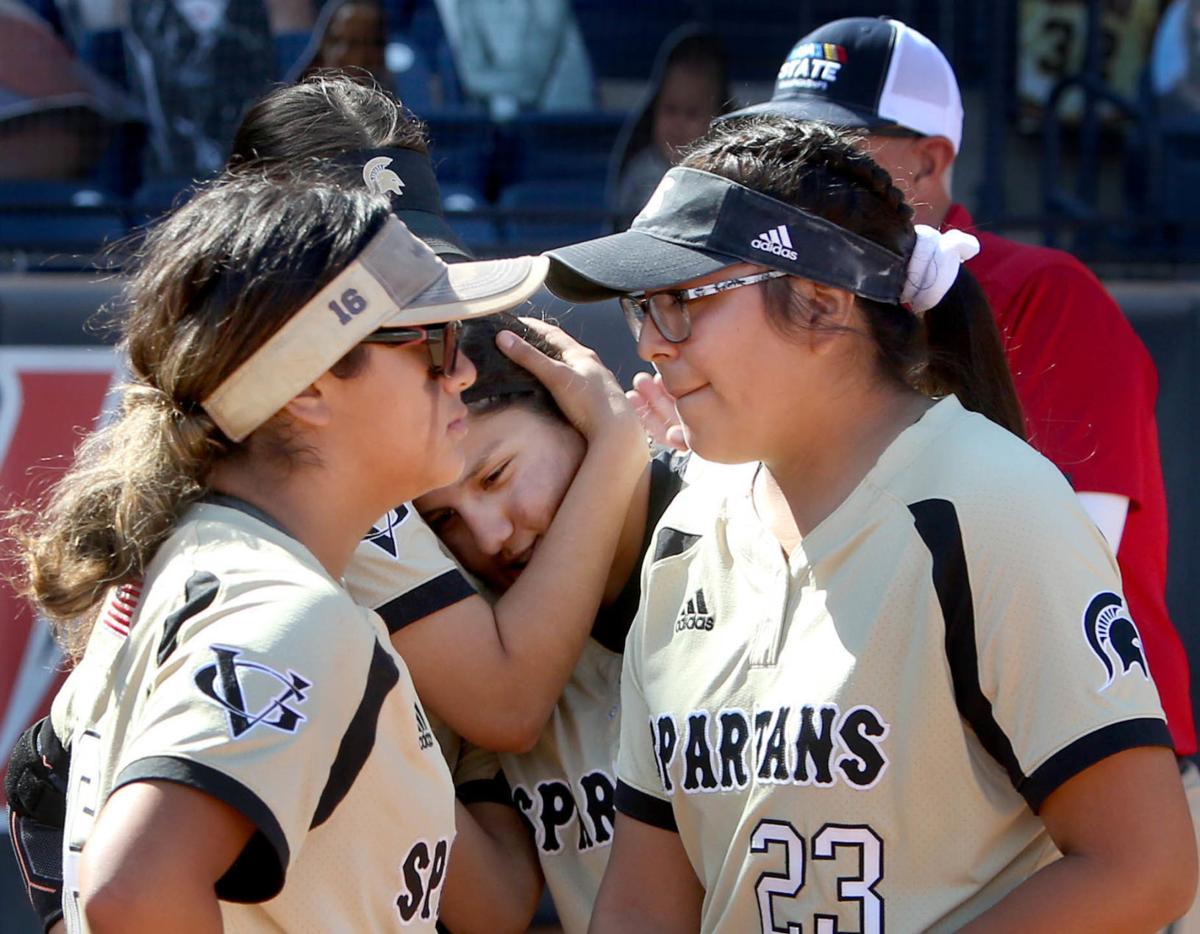 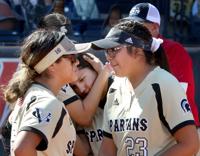 Vista Grande’s Bri Jorgensen encourages her teammates to get pumped up after she belted an RBI double against Tucson Salpointe Catholic during the 4A state championship game Monday at Hillenbrand Stadium in Tucson.

Vista Grande players react from the dugout after Adecelli Archuleta, 15, hits a two-run homer in the seventh inning against Tucson Salpointe Catholic during the 4A state championship game Monday at Hillenbrand Stadium in Tucson.

If Monday’s 4A softball state title game were a boxing match, Vista Grande did not lose a lopsided decision to Tucson Salpointe Catholic. Instead, the Spartans landed big punch after big punch late, and had the Lancers on the ropes just hoping to survive.

Ultimately, the scintillating rally in the top of the seventh fell one run short, as mighty Salpointe Catholic held on for a 5-4 win at the University of Arizona’s Hillenbrand Stadium in Tucson.

Vista Grande (18-2), the No. 2 seed, came achingly close to winning a coveted state championship. But regardless of the outcome, it was a shining sendoff for beloved Spartans coach Rudy Valenzuela, who has coached the team since the school’s inception in 2009.

Monday’s game was his last as head coach, although he said he may still coach Vista Grande in an assistant role. He’s hoping the program is taken over by assistant coach and former Spartans player Victoria Belloc.

As Valenzuela, 66, addressed his team on the field after the game, he put everything into perspective.

“I love all of you young ladies,” he said, adding that even though they came up short of the ultimate goal, the final outcome wasn’t the most important thing to him.

“You gave me your heart,” he said.

With Vista Grande trailing No. 1 Salpointe Catholic (24-0) 5-1 in the seventh, the Spartans showed they weren’t going down without a fight.

They had already stunned Oro Valley Canyon del Oro in the semifinals, coming back from down 5-3 in their final at-bat to win 6-5.

On Monday, they did it by rattling Lancers ace Alyssa Aguilar. Illeana Cosillos started the inning with a single and then scored on an RBI double by Bri Jorgensen.

Adecelli Archuleta came to the plate, and she blasted a towering two-run homer to left-center, the opposite field for the lefty hitter. All of a sudden it was 5-4, and there were still no outs.

Aguilar, a dominant pitcher, then righted the ship and got three consecutive outs, two via strikeout, to secure the win.

Alyssa Tinnin (15-2, 1.21 ERA), the star pitcher for Vista Grande, said the Spartans did have some nerves playing in the big stadium in front of a large crowd on the sport’s biggest stage.

Those nerves may have contributed to a couple of Spartans errors in a four-run third inning for the Lancers.

But you’d never know there were nerves by looking at Tinnin. From the first pitch, she looked calm and composed. She carried herself with the same confidence and swagger she always does.

It was an attitude of “Bring it on.”

“I knew we had it in us (to beat Salpointe Catholic),” Tinnin said. “I knew we could do it last year, just (the season) got cut short … right when it got cut is when we finally started bonding and becoming a team.”

A perpetual underdog spirit propelled Vista Grande all season, even though they dominated their opponents. Tinnin said they don’t have the big, athletic players of a team like Salpointe Catholic. Many people she spoke to didn’t even know where Casa Grande is located.

Many athletes talk about putting their team and school on the map, but in this case, it was literal because these people couldn’t find Casa Grande on a map.

That helped fuel the fire for the Spartans.

“They never saw us coming, we were the underdogs from the beginning,” Tinnin said.

Valenzuela announced his impending retirement late in the season — after a 5-4 win over CDO on April 29 — and once the players heard that, they wanted to send him out the right way.

Tinnin first played for Valenzuela in a summer league when she was 7 years old, then again during middle school. She said Valenzuela is the reason she chose to play at Vista Grande.

“When he said he was retiring, honestly it made me really sad,” Tinnin said. “I just wanted him to be able to say he went to state (the title game) at least once … It’s a bittersweet moment knowing he won’t be the head coach.”

There was some melancholy in Valenzuela after the game as well.

“I’ll be honest with you, I’m feeling sad,” he said. “But these girls, like I told them, I love them like my daughter. They’re like daughters to me.”

Valenzuela said the girls “battled to the end,” and it was easy to see how much that meant to him. Upon his retirement announcement, the players told him they wanted to take him to the state championship game.

That mission was accomplished, as well as many other remarkable achievements during a historic season.

“They brought me to where I wanted to go,” Valenzuela said.

Valenzuela said Vista Grande has just as good of a team as big, bad nationally-ranked Salpointe Catholic. And he’s absolutely right. Anyone who watched the game Monday would acknowledge that, otherwise they would be lying to you.

Valenzuela has great relationships with many of his former players, and the girls on the 2021 team will surely be no different.

“I just hope that they enjoyed me being their coach and that our relationship hopefully will stick forever,” he said. “I hope this team … down the road when they have senior night, if I’m at the game, that they come, they still give me my hugs, give me my high-fives … I’ll love them until the end.”