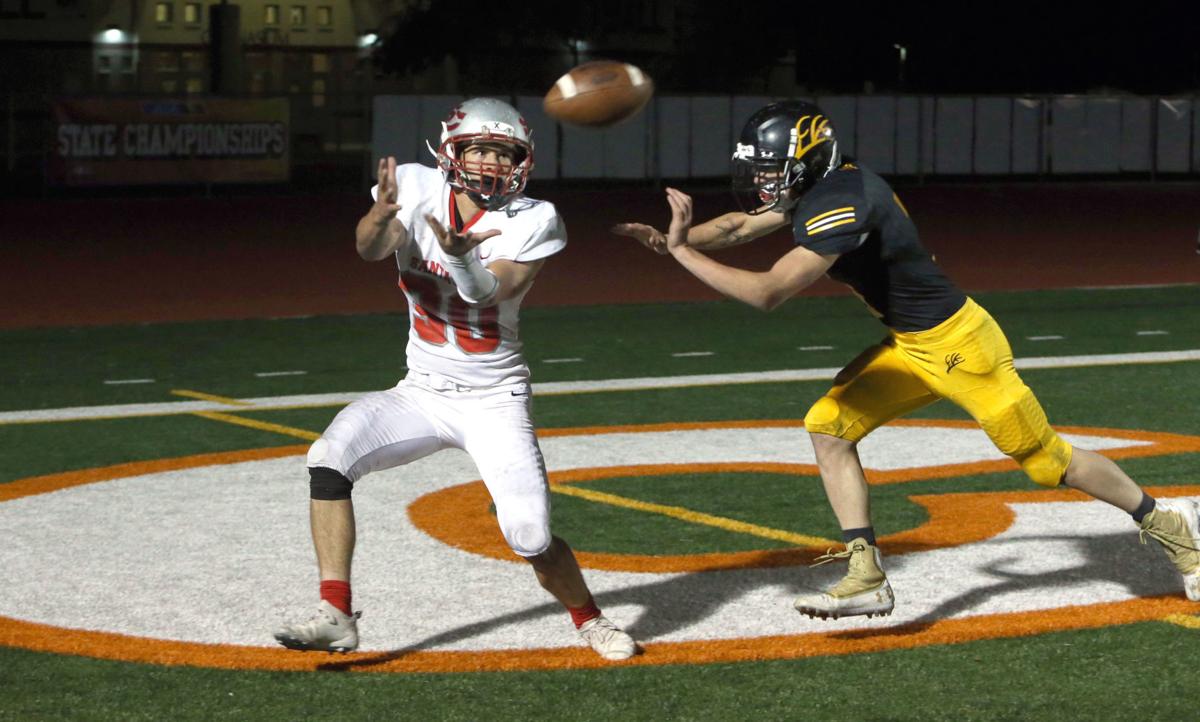 Hunter Ogle of Santa Cruz makes a reception on a two-point conversion as Round Valley’s Dylan Jordan trails during the Class 2A semifinals Nov. 23 at Campo Verde High School in Gilbert. 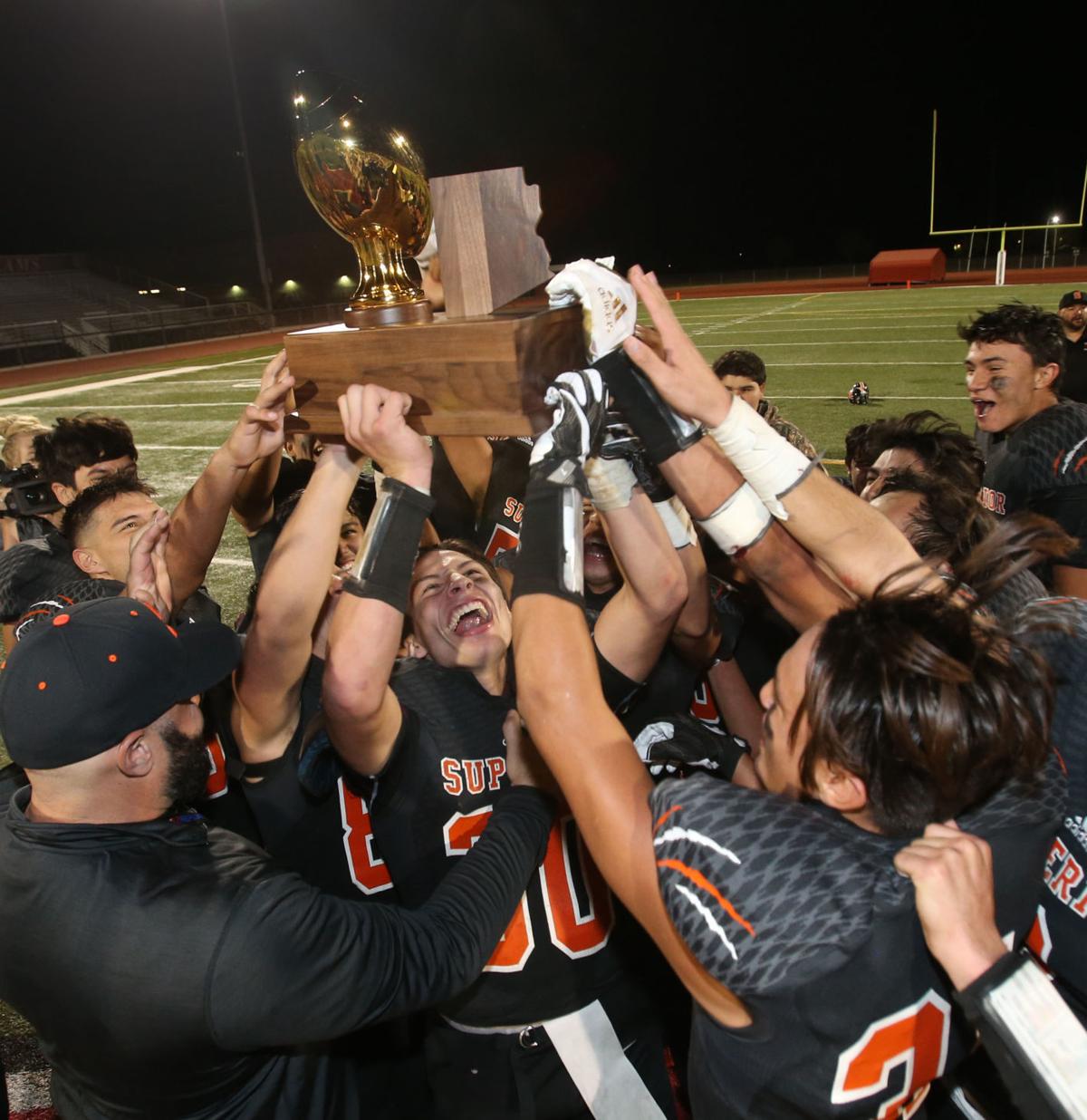 Superior quarterback Steven Ybarra, center, holds up the the Class 1A state championship trophy after defeating the Hayden Lobos 70-20 on Nov. 10 at Maricopa High School. 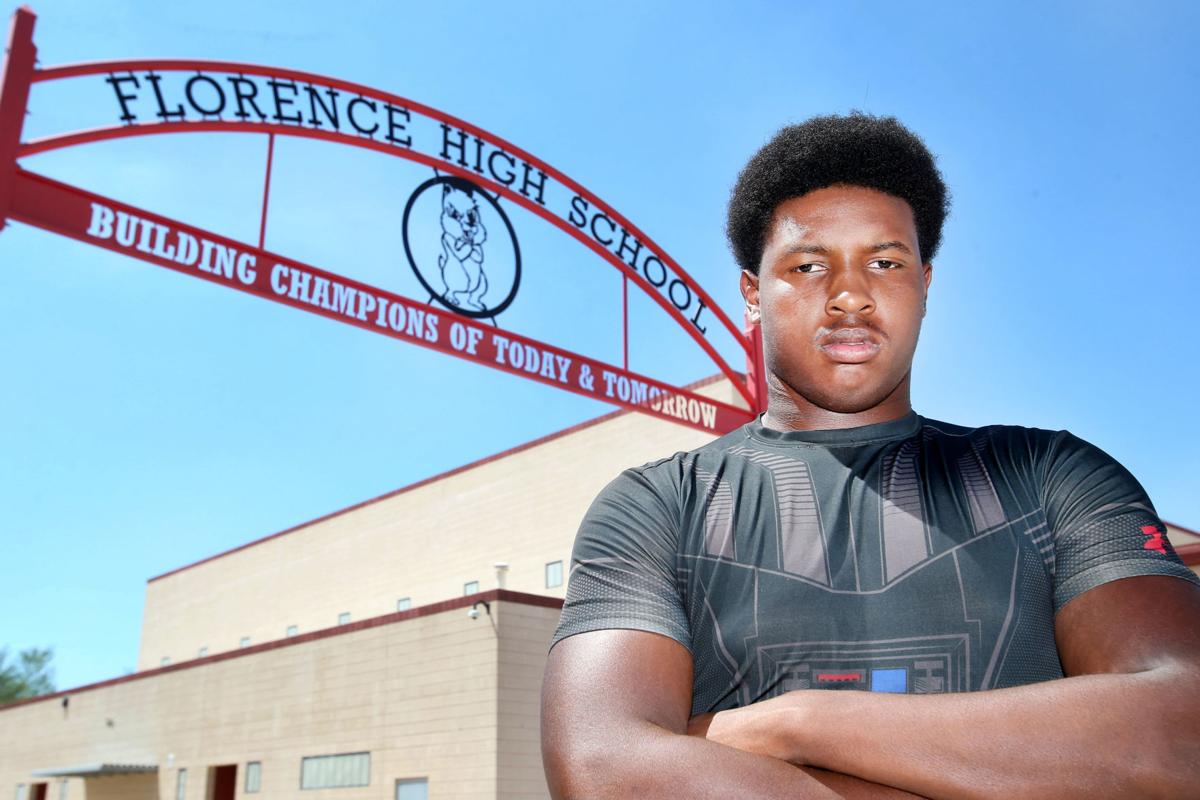 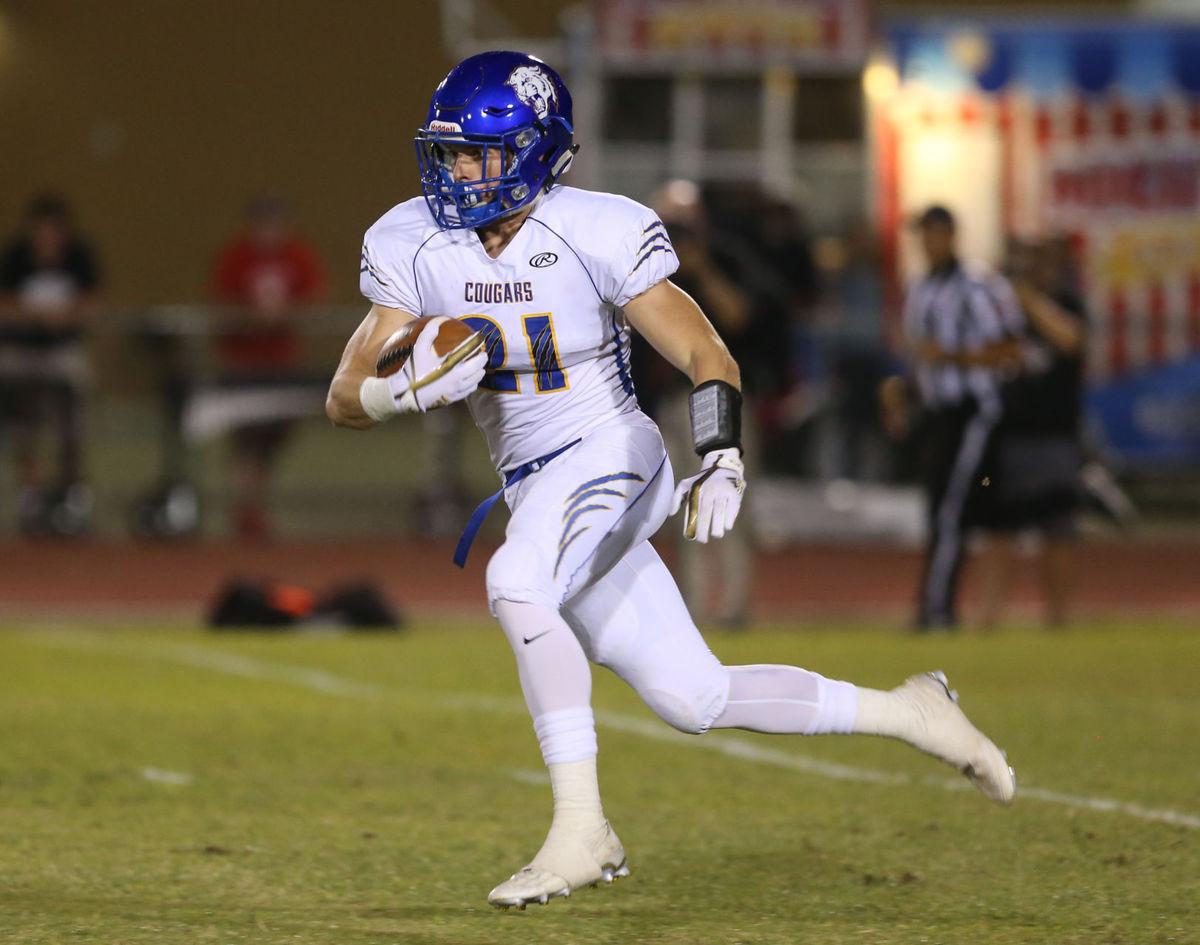 Hunter Ogle of Santa Cruz makes a reception on a two-point conversion as Round Valley’s Dylan Jordan trails during the Class 2A semifinals Nov. 23 at Campo Verde High School in Gilbert.

Superior quarterback Steven Ybarra, center, holds up the the Class 1A state championship trophy after defeating the Hayden Lobos 70-20 on Nov. 10 at Maricopa High School.

Now is as good a time as any to look back, and it’s of course a great time to make lists. Here’s a look at the best football players to grace Pinal County the last three years.

While I covered football and other sports on occasion in my first stint with PinalCentral, it wasn’t my main gig. I was the county reporter, mainly covering government and politics.

Starting in December 2016, I became the sports editor. So for the purposes of this list, I’m only considering football players from seasons played since then: 2017, 2018 and 2019.

I compile an all-county team for football every year. This list will combine all players from the last three seasons into one PinalCentral all-county team that covers 2017-19.

Starting at quarterback, I went an unconventional route and picked Steven Ybarra, who played 8-man football at Superior. Ybarra had an outstanding career that culminated with him leading the Panthers to a 1A state championship in 2018, their first state title since 1954.

In his junior and senior seasons combined, Ybarra threw 64 touchdowns to six interceptions, and he rushed for 2,281 yards and 41 TDs. Other notable quarterbacks during this time included Gibson Limongello of Apache Junction and Jared Wood of Florence.

Running back was a loaded position, and it was difficult to narrow down to two. The two that make the list are Nolan Susel of Florence and Hunter Ogle of Santa Cruz Valley. As a senior, Susel accumulated 2,239 yards from scrimmage and 36 total TDs. Ogle, who has yet to play his senior season, rushed for 1,844 yards and 23 scores as a junior in 2019.

Wide receiver was more clear-cut. Jacob Cowing of Maricopa was the best. In his final two seasons with the Rams, he had 1,953 yards and 21 TDs. As a senior, he averaged an absurd 31.1 yards per catch.

At the other receiver spot, Cameron Gardner was a big playmaker for Casa Grande Union. In his high school career, he had 2,138 receiving yards and 24 scores, in addition to 606 rushing yards and 10 rushing TDs.

Tight end is a difficult position to evaluate in high school, especially the blocking aspect. I went with Deven Mock of Combs, who played tight end and receiver. In his junior and senior seasons combined, he caught 64 passes for 951 yards and eight TDs.

We don’t often see offensive linemen string together consecutive great seasons, but perhaps the most consistent guy on the O-line was Isaiah Navarro, who made the PinalCentral all-county first team all three years.

The rest of the offensive line includes Michael Flood of Maricopa (headed to UTEP), Izack Salazar of Santa Cruz Valley (currently at Greenville University), Quinton Tucker of Florence and Santos Cornejo of CG Union, who still has a senior year to play.

The defense starts with Regen Terry of Florence on the defensive line. The most decorated recruit the county has seen in many years, Terry has signed with the Arizona Wildcats.

The defensive line is rounded out by two Maricopa stars, Tylen Coleman and Logan Taylor. Coleman posted double-digit sacks in each of his final two years in high school (13 in 2017 and 11.5 in 2018), while Taylor had 15 sacks and 22 tackles for a loss as a senior in 2018.

The linebacking corps is represented by Tyler Thompson of Poston Butte, Shelton Mathis of Florence, Bakari Jackson of Maricopa and Zachary Langenbach of Apache Junction.

Thompson was the PinalCentral Defensive Player of the Year in 2017 after posting 127 tackles, 15 tackles for a loss, 4.5 sacks, two forced fumbles and an interception. Mathis had more than 100 tackles as a junior and senior, and he recorded 34 tackles for a loss in those two seasons.

In the secondary, Jahmier Haman of Casa Grande Union is the best player I’ve seen during the last three years. He is a lockdown corner who can do it all. He had three interceptions as a senior, returning one for a touchdown.

Zimmerman had 71 tackles, seven interceptions and two forced fumbles as a senior. Shane Mathis had 77 tackles and five interceptions as a senior and had nine picks in his high school career. In his final two seasons at Maricopa, Nelson combined for 144 tackles, 22 passes defended and four interceptions.

Lastly, the special teams unit has Ian Loggins of Combs at kicker, Brandon McMahan of San Tan Foothills at punter, and Gardner at return specialist.

Loggins went 6 for 6 on field goals as a senior in 2019, with a long kick of 41 yards. McMahan averaged 44.2 yards per punt in 2018, pinning six inside the 20. Gardner was an electric returner who had seven return touchdowns (six on kickoffs) in his career with the Cougars.

The Wright Perspective: MLB could rise from ashes in Phoenix

In mythology, the phoenix is a bird reborn by rising from the ashes. The MLB season could si…

When the NCAA canceled all spring sports due to the COVID-19 epidemic, it left athletes wond…

The Wright Perspective: Storylines we won’t see from seniors this spring

The inevitable happened Monday, as the Arizona Interscholastic Association canceled the spri…

The Wright Perspective: How to deal with missing sports

We all have our own ways of dealing with the absence of sports in our lives.

The Wright Perspective: Where Cards should focus in draft

The Wright Perspective: Time for AIA to shut down season

The Wright Perspective: It’s OK to miss sports, even though drastic action necessary

If Phoenix Christian administrators wanted to send a message, they did. And it’s a weak one.…

Combs valedictorian, athlete was stuck in Peru during pandemic

The Wright Perspective: NCAA football without fans? Don’t bet on it

The NCAA has some major issues at hand. There’s a high probability that one of two options with play out with football, and neither one of the…

Central Arizona College has a well established reputation of getting its baseball players drafted to the majors. With the 2020 MLB draft in fl…