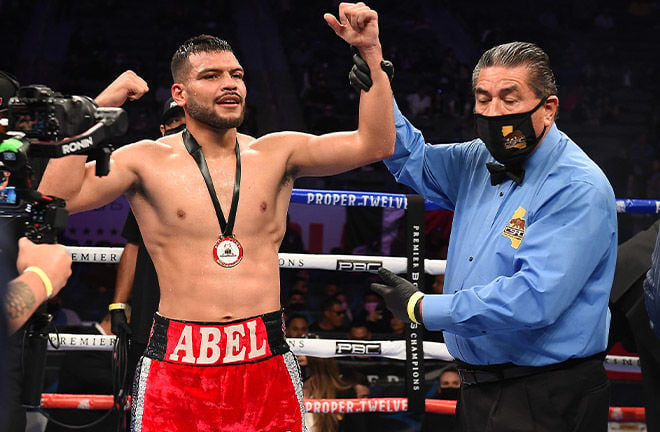 Abel Ramos has his hand raised after scoring a 6th round TKO win over Omar Figueroa on Saturday at Dignity Health Sports Park in Carson, Calif. 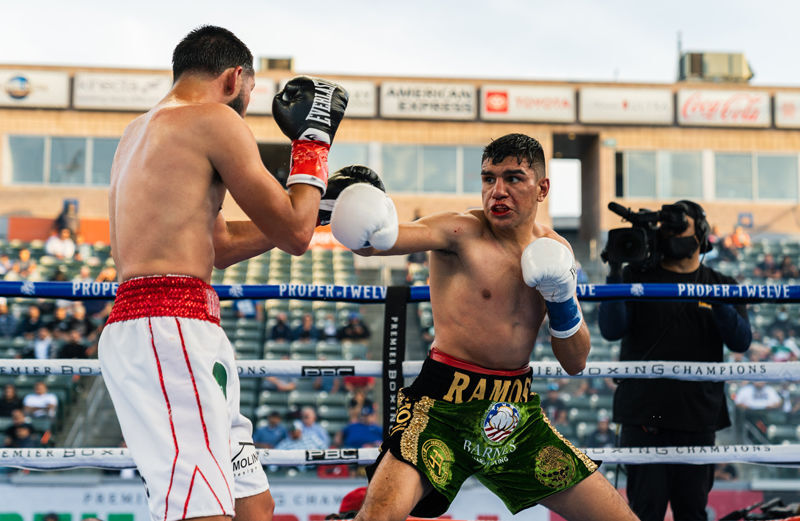 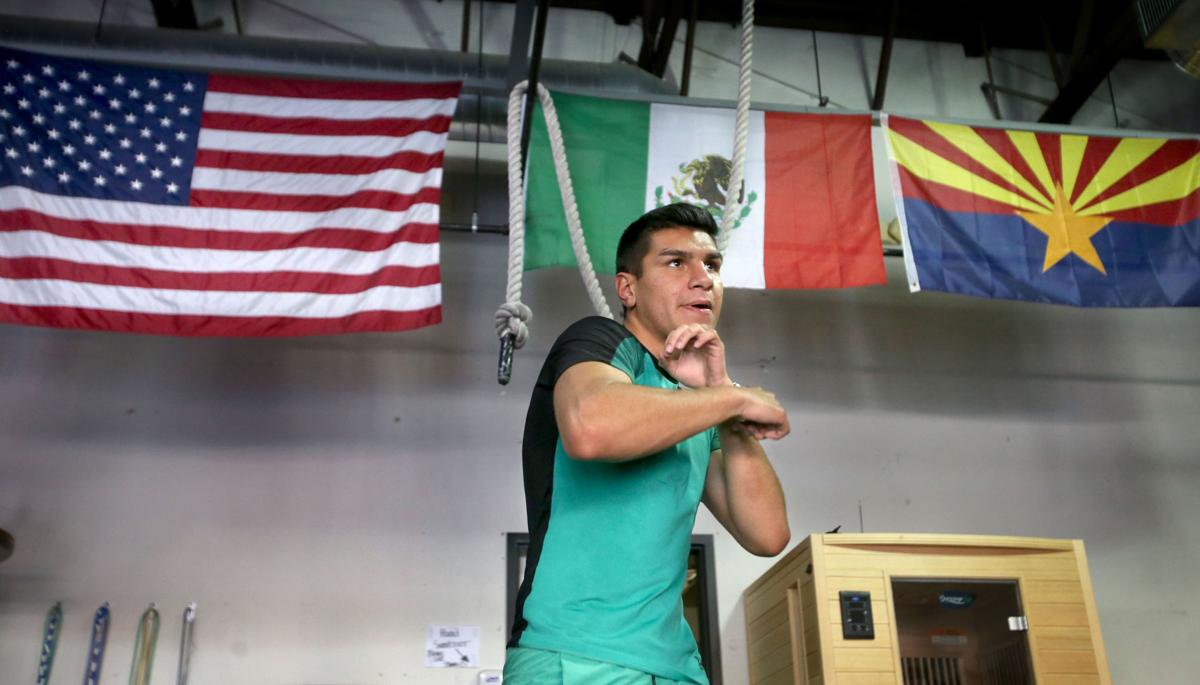 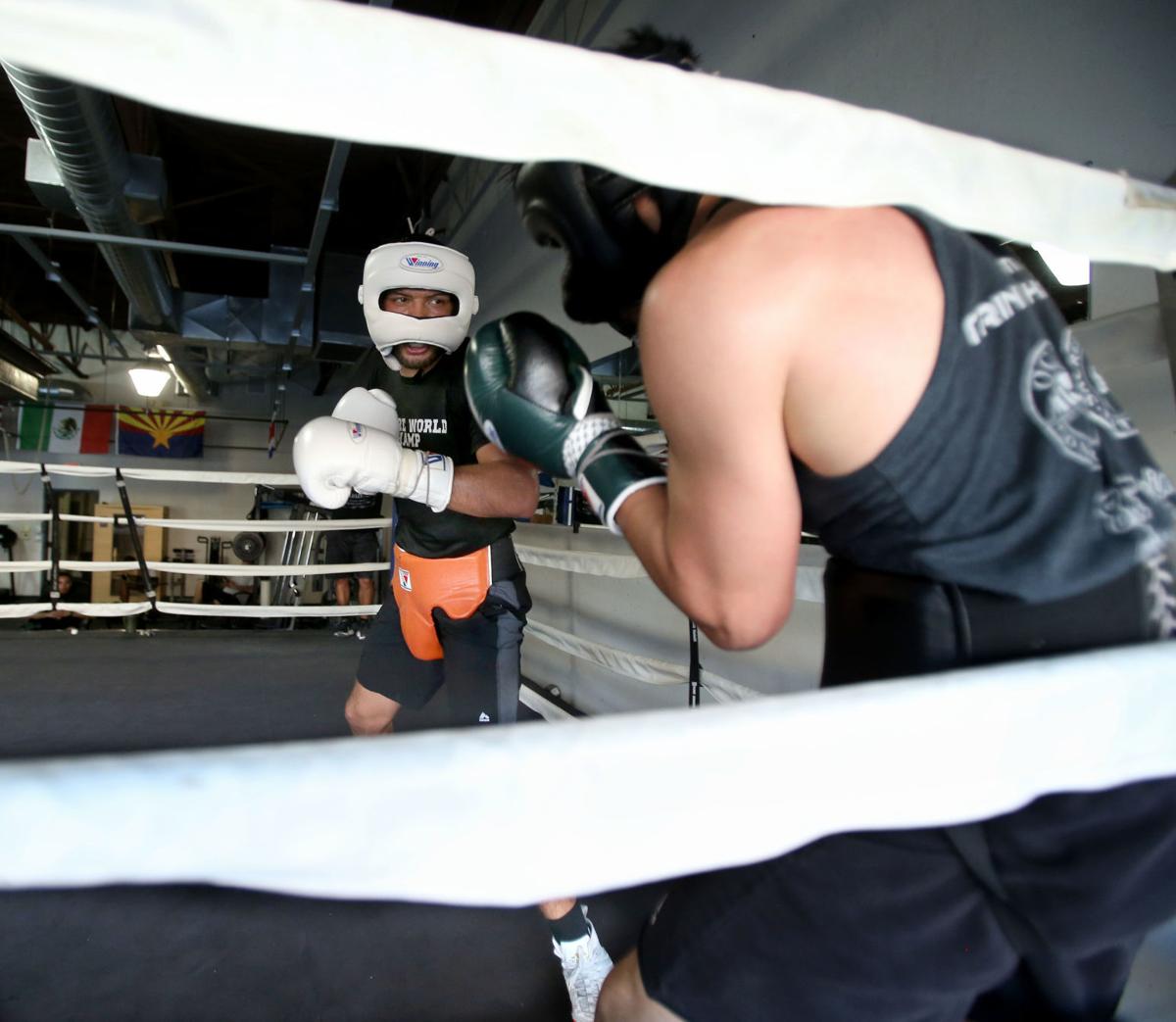 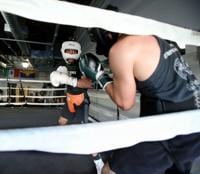 Abel Ramos has his hand raised after scoring a 6th round TKO win over Omar Figueroa on Saturday at Dignity Health Sports Park in Carson, Calif.

May 1, 2021, is a day the Ramos family will never forget. With two scintillating victories by Abel and Jesus Ramos on a boxing pay-per-view card, all was right in the family’s world Saturday night in Carson, California.

Adding to the drama and excitement was the fact that the entire PPV card — headlined by a bout between former heavyweight champion Andy Ruiz taking on Chris Arreola — was filled with fighters of Mexican or Mexican-American heritage.

Fans, albeit limited due to the ongoing COVID-19 pandemic, were back in the stands at Dignity Health Sports Park in Carson, a Los Angeles suburb. The geography was strategic, drawing a sizable crowd of enthusiastic fans of Mexican descent.

While both Ramos fighters had nights to remember — and Jesus Ramos Sr. worked the corner for each of them — it was an especially significant performance for Abel.

And it was a night of pride for Casa Grande, the city both boxers call home.

At 29, Abel is a boxing veteran and the uncle of 20-year-old Jesus.

In his previous fight, Abel lost a split decision to elite welterweight Yordenis Ugas for a vacant WBA belt. Ringside observers and announcers had the fight as lopsided in favor of Ugas.

Abel admitted he was upset with himself after the fight. He knew he fought hard, but it was also about a missed opportunity. Would there be another shot at a title belt?

For Abel (27-4-2, 21 KOs), Saturday’s fight against former WBC lightweight champ Omar Figueroa (28-2-1, 19 KOs) was a title eliminator in more ways than one. A loss would be devastating to Abel’s chances of fighting for a title again.

He wasn’t about to let that happen.

Figueroa came in with an incredibly awkward style, bobbing and shaking his head side to side and moving as if someone dumped a bucket of fire ants down his trunks.

Ramos spent the first two rounds trying to figure out this 500-piece jigsaw puzzle, but once he did, it was all over. He began timing his shots and blasting through the defense of Figueroa.

Just like Abel said he would do, he went directly at Figueroa’s body, breaking him down round by round. That eventually created openings upstairs as well, with Ramos giving Figueroa a black eye.

At the end of the sixth round, a weary Figueroa was fighting back but was clearly hurting and in big trouble. In the final few seconds of the round, Ramos unleashed some hellacious punches to Figueroa’s body.

As Figueroa returned to his corner and sat on his stool, he began vomiting up blood — lots of it. His corner couldn’t let him take any more punishment, and the referee stopped the fight.

I’ve seen many fights in my day, and this was one of the most brutal assaults to the body I’ve ever witnessed.

Ramos was the bigger, stronger fighter, and it was a showstopping performance. It’s a signature win over a high-quality opponent, exactly what he needed.

Abel is back in line among the title contenders, a clear top 10 fighter in a loaded welterweight division. Boxing website BoxRec now has him ranked as the No. 7 welterweight in the world.

The PPV version of the undercard was opened by Jesus, a future star in the sport. At just 20 years old, Jesus had already beaten his first 15 opponents, 14 of them by knockout.

Saturday’s fight was seen as a step up in class against former Olympian Javier Molina, who entered with a 22-3 record and nine knockouts.

While Molina had a clear edge in experience, the moment was never too big for Jesus. It’s impressive watching the 5-foot-10 welterweight from Casa Grande who is still growing into his body and looks massive for his weight class.

In the weeks leading up to the fight, Jesus told me he wanted to show fans he was more than just a power puncher. He wanted to show his other skills, including the ability to go deep in a fight.

Jesus moved forward, stalking Molina just like he has with all his other opponents. He showed good head movement, good feet and the ability to outbox a high-quality boxer.

The fight went all 10 rounds, but Jesus was calm, cool and in control of the fight the whole way. He won by unanimous decision, with two of the three judges giving him nine of the 10 rounds on their scorecards.

The younger Ramos (16-0, 14 KOs) passed his test with flying colors. He showed he’s more than a knockout artist, and his stamina was never in doubt as the fight went the distance.

His goal is to be a champion by age 21. He turns 21 next March. With the way he’s fighting, that goal is well within reach.

If Abel Ramos keeps performing like he did at the MGM Grand in Las Vegas on Saturday, a shot…

The Wright Perspective: Basketball teams on fire in Florence

David Silvas and Bob Bellemare deserve a round of applause. The two coaches have made Floren…

The Wright Perspective: No sympathy for Serena

The Wright Perspective: Even in defeat, Ramos ready for prime time

When fighting in another man’s backyard, winning a decision can be tougher than climbing Mou…