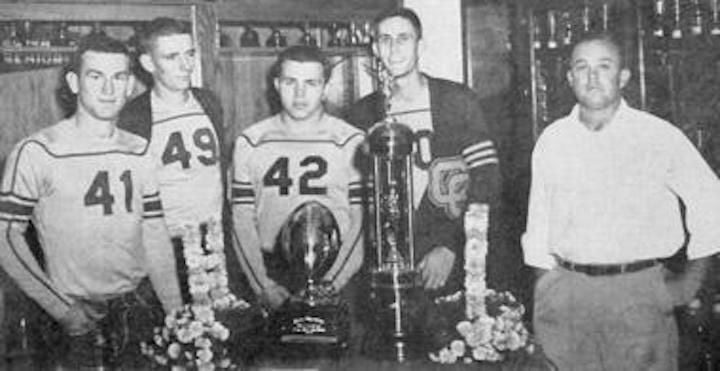 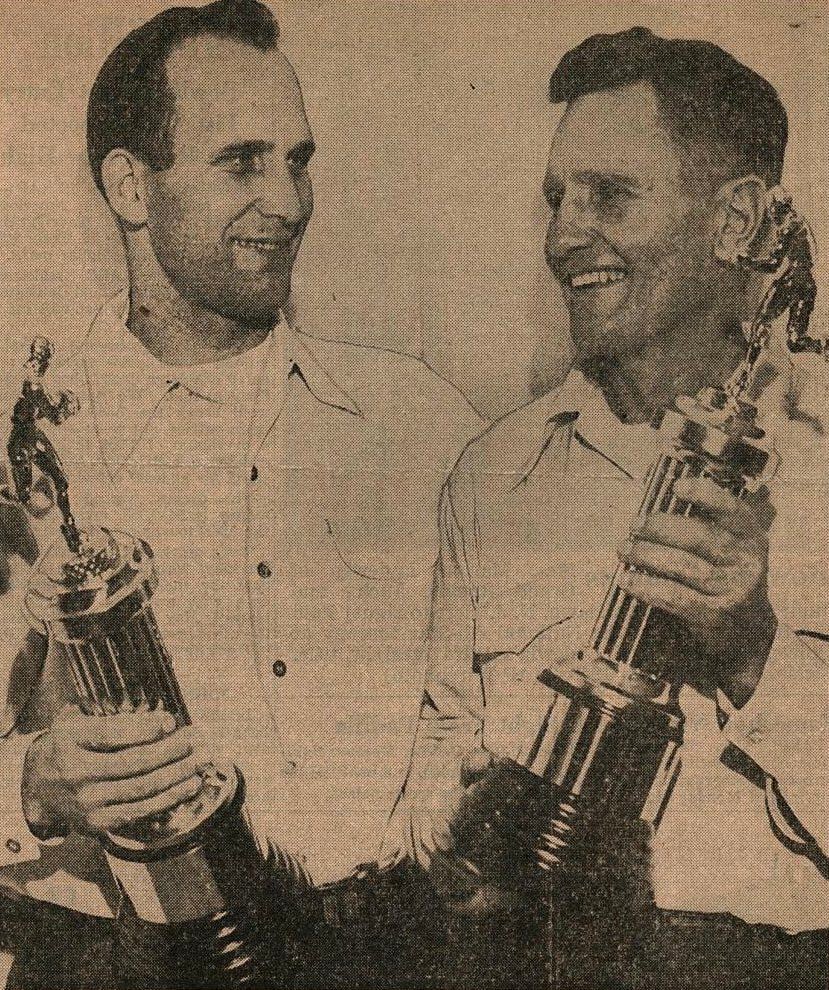 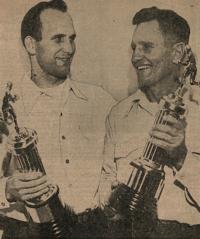 Casa Grande coach Al Van Hazel, left, and Chandler coach Clarence Skousen congratulate each other while holding identical trophies for winning the co-championship of the East Central District. Each team had 4-1 records in conference play.

Casa Grande coach Al Van Hazel, left, and Chandler coach Clarence Skousen congratulate each other while holding identical trophies for winning the co-championship of the East Central District. Each team had 4-1 records in conference play.

The current Cougars easily boast the best collection of football talent the team has had in decades. But there are some Casa Grande Union teams from the 1950s whose dominance still echo down the school’s hallways and reverberate through the community.

The Cougars advanced to the 4A semifinals this season before losing 35-13 to Glendale Cactus on Dec. 4, a historic achievement for the school.

Sometimes when firing off a story at Formula One speed while on a tight deadline, mistakes are made. I recently made a mistake when writing about Casa Grande’s 4A quarterfinal victory over Peoria.

While that win put the Cougars in the state semifinals for the first time, I also wrote that the team had another goal yet to come — winning its first state championship. I later deleted that line from the online version of the story, realizing it was inaccurate.

This was not a mistake that came from lack of knowledge. I knew Casa Grande had previously won a football state championship. What I meant to write was that a win in the semifinals would put the school in its first ever state title game. There is a distinction.

For those who don’t know the history, state playoffs like we see today didn’t really begin in Arizona — via the Arizona Interscholastic Association — until 1959. Before that, state champions were determined by a meeting of the minds akin to an informal committee.

Usually the team with the best record in its classification won.

The 1950 team was coached by Thomas E. “Shanty” Hogan, with Al Van Hazel as the lone assistant coach. Van Hazel was the head coach for the other two championship teams.

The 1950 and 1958 teams won their titles outright, while a bizarre set of circumstances resulted in the 1953 title being a co-championship shared by three schools — Casa Grande, Globe and Phoenix Carver. The latter was an all-Black segregated high school that closed a year later in 1954.

In 1953, Carver finished with a 7-2 record, but it was undefeated against Arizona Class B competition. Its only losses came to Blythe, a Class B school in California just 5 miles across the state line, and Phoenix St. Mary’s, a Class A program.

There are all sorts of interesting nuggets about how the 1953 Class B champion was chosen, many of which are included in a Casa Grande Dispatch article from that year, which unfortunately, has no byline.

“Although no actual state champion is chosen by any specified group, each year the sports writers and announcers about the state, as well as the coaches, come to some sort of agreement on a state champion,” the article states.

The article refers to the state title as “mythical” several times, and that is the accepted vernacular for championships won prior to the advent of state playoffs.

There is some discussion of other criteria discussed to determine the champion, such as total points scored and “defensive record,” which I assume refers to total points allowed.

“Again this year the situation appeared to give the much sought state crown to Carver, but experts took a better look at the records and came up with the Monarchs, Tigers and Cougars as Co-state champions,” the Dispatch article reads.

Much has been written about the 1950 team, which is certainly the most dominant and celebrated team in school history. Those Cougars were 10-0 and outscored their opponents 478-91. Their smallest margin of victory was 21, a 34-13 win over Chandler in Week 6.

Shanty Hogan was a former University of Arizona quarterback who later coached Phoenix College to a JUCO national championship in 1964.

“He was an offensive genius,” Frank Coxon, a first team all-state center on the 1950 team, told PinalCentral in 2011. “He used to say show me a defense, and I’ll show you how to beat it.”

The Cougars were so fabulous in 1950 that Arizona Daily Star sports writer Lou Pavlovich traveled from Tucson to cover their last game of the season against Florence. Casa Grande put an exclamation point on its season by eviscerating Florence 55-0.

Pavlovich then waxed poetic about the Cougars in his Monday morning column.

Pavlovich wrote that it was “very likely one of the top elevens (teams) of any high school club in Arizona’s past.” Speed was the name of the game for the 1950 Cougars, but to Pavlovich, simply calling them fast did not do them justice.

“They were syncopated murder on the gridiron, relatively small for any high school team, but extremely fleet afoot ... all of ‘em,” he wrote. “They were the type of team that one coach in a thousand gets once in a lifetime.”

Glenn King was the star halfback on the 1950 crew, rushing for 2,200 yards and scoring 24 total touchdowns. King’s single-season school record for rushing yards and total TDs stood until 1994 when Russell Trejo surpassed them with 2,349 yards and 25 TDs.

Fullback Bob Perguson had 17 TDs, and he was followed by halfback Dave MacGregor with 11 TDs and Morgan with nine scores.

Although the team didn’t throw much, quarterback Jim Stevens still had 16 TD passes.

“Where in this big, wide, cruel world can you find anything to compare with Casa Grande high school? It’s heaven, I tell you ... heaven,” Pavlovich wrote in the closing of his 1950 column.

The Cougars fell a little short of ultimate glory in 2020, but the 2021 team has a good shot of adding a long-awaited fourth state championship to the trophy case.

I think the trophies from the 1950s would welcome a new friend.

When looking back on 2020, the COVID-19 pandemic, and the devastation left in its wake, will…

As the coronavirus continues to ravage the country, it’s important to be grateful for the go…

Apparently there is no kiddie pool for podcasting.

The Wright Perspective: Benchmark makes some nervous, but prep football will start on time

We’re getting closer to the actual start of high school football games in Arizona, and some …

At some point next fall, it will be fun for Angel Flores to sit back and count all his Divis…

The Wright Perspective: Keep all options open for prep sports

Sometimes change is difficult. But in this unprecedented time of a global pandemic, all opti…

Everyone wants to return to football. The problem is, everyone has a different idea of when …

A little more than two minutes remained on the clock. Rishard Davis bent over, his face buried into his knees. The emotion struck deep within …