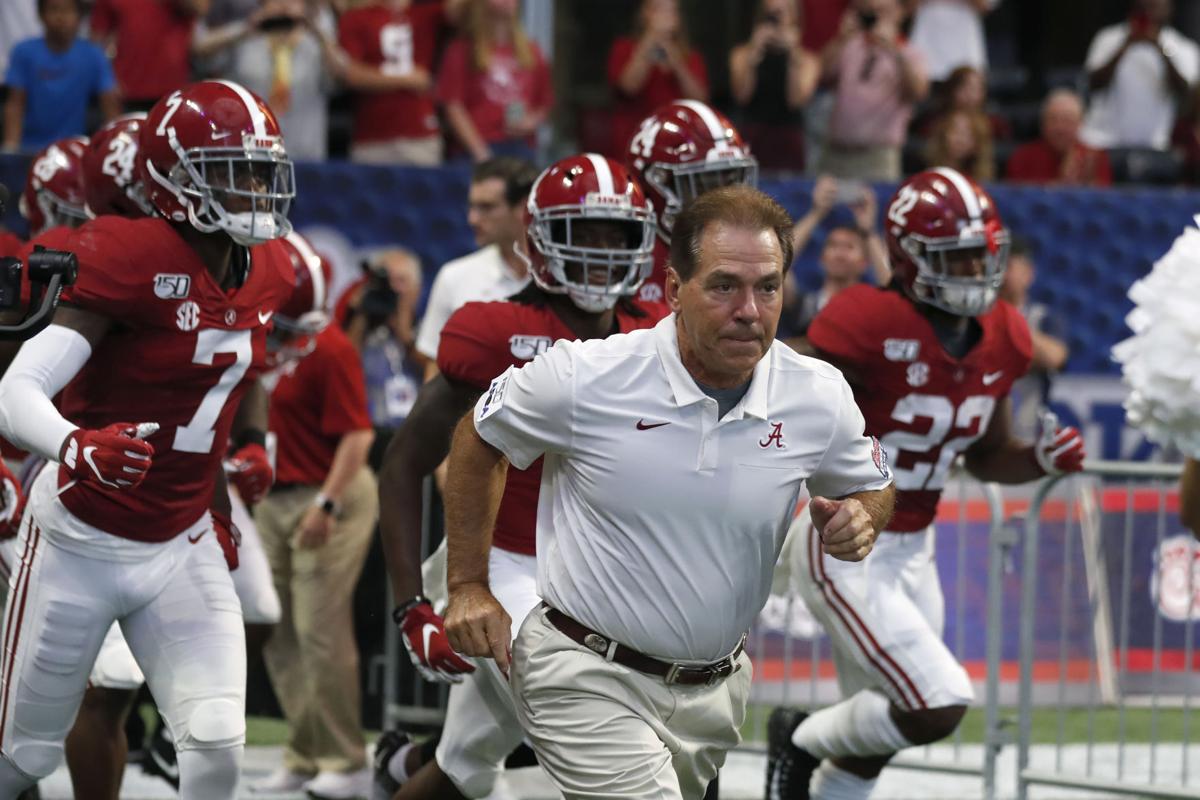 Alabama coach Nick Saban leads his team onto the field against Duke on Aug. 31, 2019, in Atlanta. 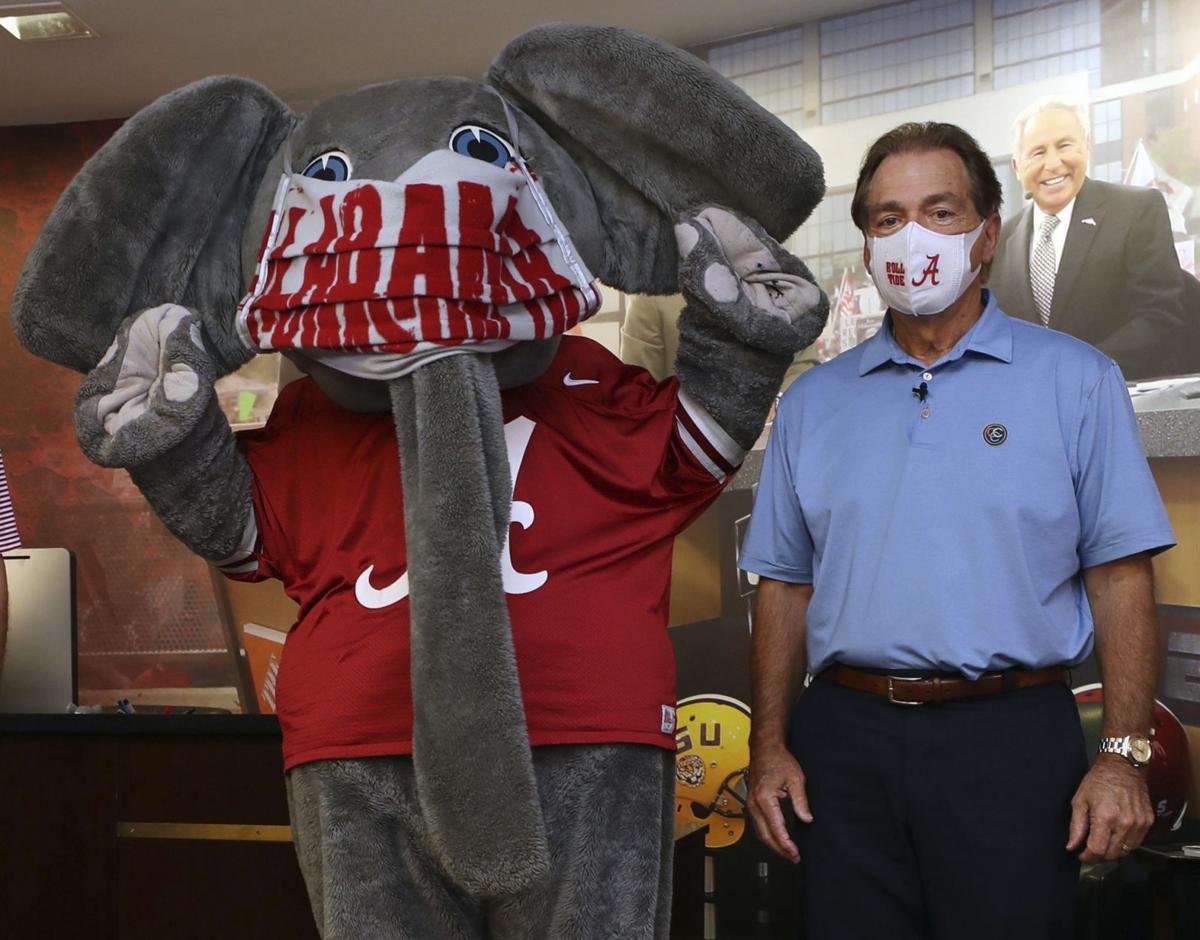 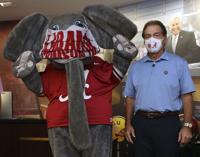 Alabama football coach Nick Saban and the school's elephant mascot, Big Al, wear masks on the university campus May 20 in Tuscaloosa, Ala. 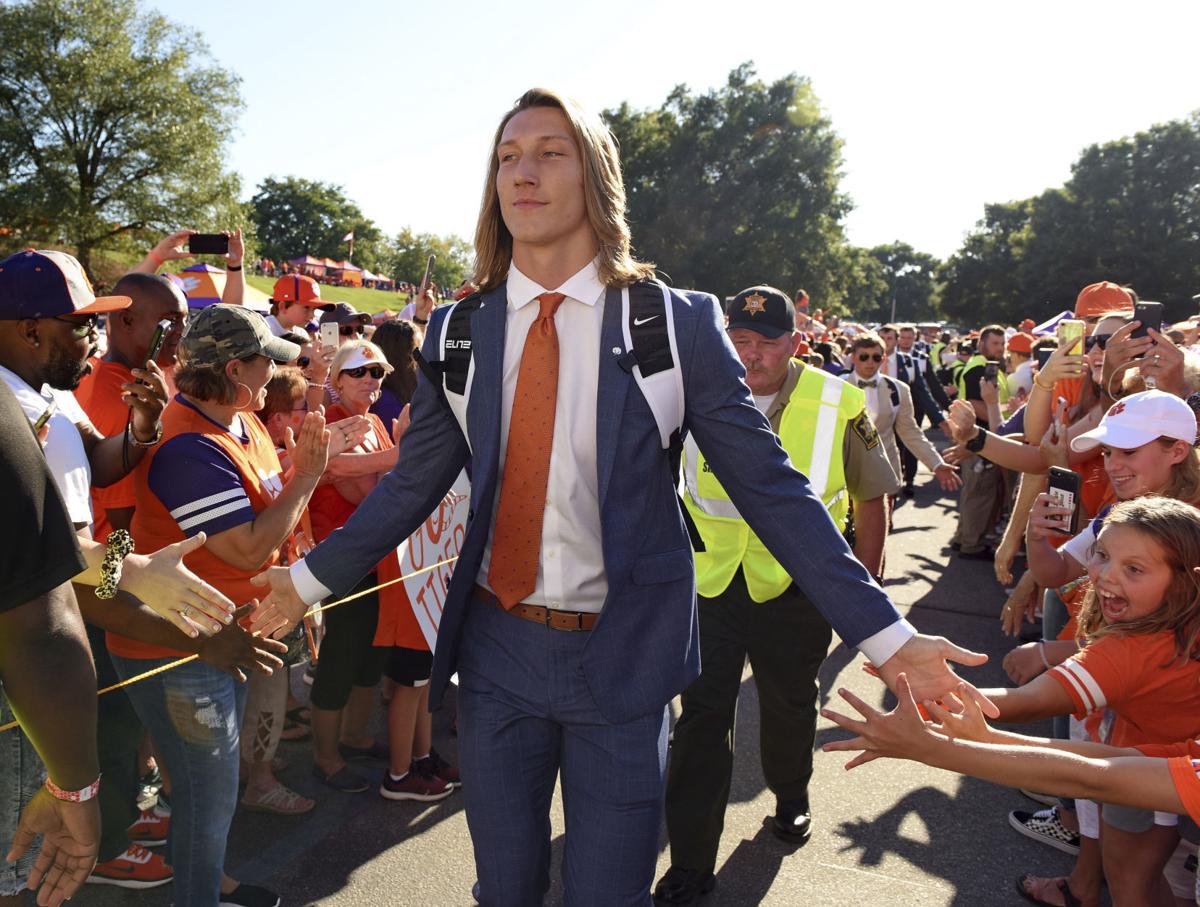 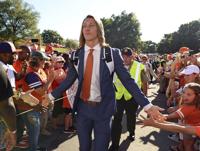 Clemson's Trevor Lawrence greets fans as he arrives for the team's game against Georgia Tech on Aug. 29, 2019, in Clemson, S.C.

Alabama coach Nick Saban leads his team onto the field against Duke on Aug. 31, 2019, in Atlanta.

Alabama football coach Nick Saban and the school's elephant mascot, Big Al, wear masks on the university campus May 20 in Tuscaloosa, Ala.

Clemson's Trevor Lawrence greets fans as he arrives for the team's game against Georgia Tech on Aug. 29, 2019, in Clemson, S.C.

The Big Ten and Pac-12 have postponed fall football. But major college football will be played this fall.

Tuesday morning provided a quick one-two combination gut punch and head shot to many in college athletics. The Big Ten announced it was postponing fall football with the hopes of salvaging the season in the spring. About an hour later, the Pac-12 announced the exact same thing.

For the purposes of this column, I am focusing on football.

This is life in 2020, as we continue to deal with a global pandemic. My immediate thoughts are that I feel bad for the athletes. I also feel bad for the coaches, trainers, staff and everyone involved in football in those major conferences.

But another thought was, why? I understand that public health is more important than football. That’s a simple argument, and it misses the point on several levels.

In conferences such as the Big Ten and Pac-12, schools have resources. Not every school is Ohio State or Oregon, but the resources are plentiful. Ohio State and Michigan have been transparent about stringent COVID-19 testing and protocols to keep players safe.

Pac-12 schools have similar capabilities. At this point, it’s safer for the college football players who are in controlled environments with access to continuous testing than it is for a regular student on campus.

It’s also safer for the football players in that environment than it would be for them at home or on their own. College students do dumb things. They party a lot. I know. I was one.

But the salient point is liability. And to throw in another l-word, lawyers. How about a third? Lawsuit.

The Big Ten and Pac-12 decisions were driven not by the fear that they couldn’t keep their student-athletes safe and healthy but instead by fear of massive lawsuits that would inevitably result if an athlete became seriously ill, or God forbid, died due to COVID-19.

For Big Ten and Pac-12 fans, the news sucks. You can’t watch your team this fall. Arizona State and Arizona won’t be playing any games.

However, the conferences have postponed fall football. I have seen the word “canceled” in too many reports. It’s misleading at best. Both conferences have said they are trying to make a spring football season happen.

While I hope spring football can be played in the Big Ten and Pac-12, we’re a ways off from knowing how that will play out.

And I’m here to tell you, the SEC is going to play football this fall. During the pandemic, I have always advocated that sports should be played when it is safe for the athletes. I believe it is in the SEC. More importantly, the conference itself believes that.

“I remain comfortable with the thorough and deliberate approach that the SEC and our 14 members are taking to support a healthy environment for our student-athletes,” SEC commissioner Greg Sankey said in a statement Tuesday.

That statement came a day after Alabama coach Nick Saban said his players were safer in the confined, controlled environment of Alabama Football than they were anywhere else.

It’s not often I find myself in agreement with Saban. But he’s right about this. And there are plenty who will criticize him for his comments and say that he’s just being selfish.

Take it for what it’s worth, but Saban said it’s not about him.

“I want to play, but I want to play for the players’ sake, the value they can create for themselves,” he told ESPN. “Players are a lot safer with us than they are running around at home. We have about a 2% positive ratio on our team since the Fourth of July. It’s a lot higher than that in society.”

Saban added his players can get tested “as many times as they want or anytime they feel like they need to.”

The ACC is standing firm and is scheduled to play football in the fall. The Big 12 announced Wednesday that it is also moving forward with fall sports, including football, beginning in September.

“The safety of our students, staff and overall campus communities will always be our top priority, and we are pleased with the protocols being administered on the 15 campuses,” the ACC said in a statement Tuesday. “We will continue to follow our process that has been in place for months and has served us well.”

This conference-by-conference piecemeal approach exposes how badly college football — or at least Power Five conferences — needs a commissioner or some sort of centralized leadership. That’s an argument for another day.

Football will be played this fall. And if you’re not going to watch the SEC, the ACC or the Big 12, there’s always the NFL. That’s not going anywhere. And it may even come to you on Saturdays.