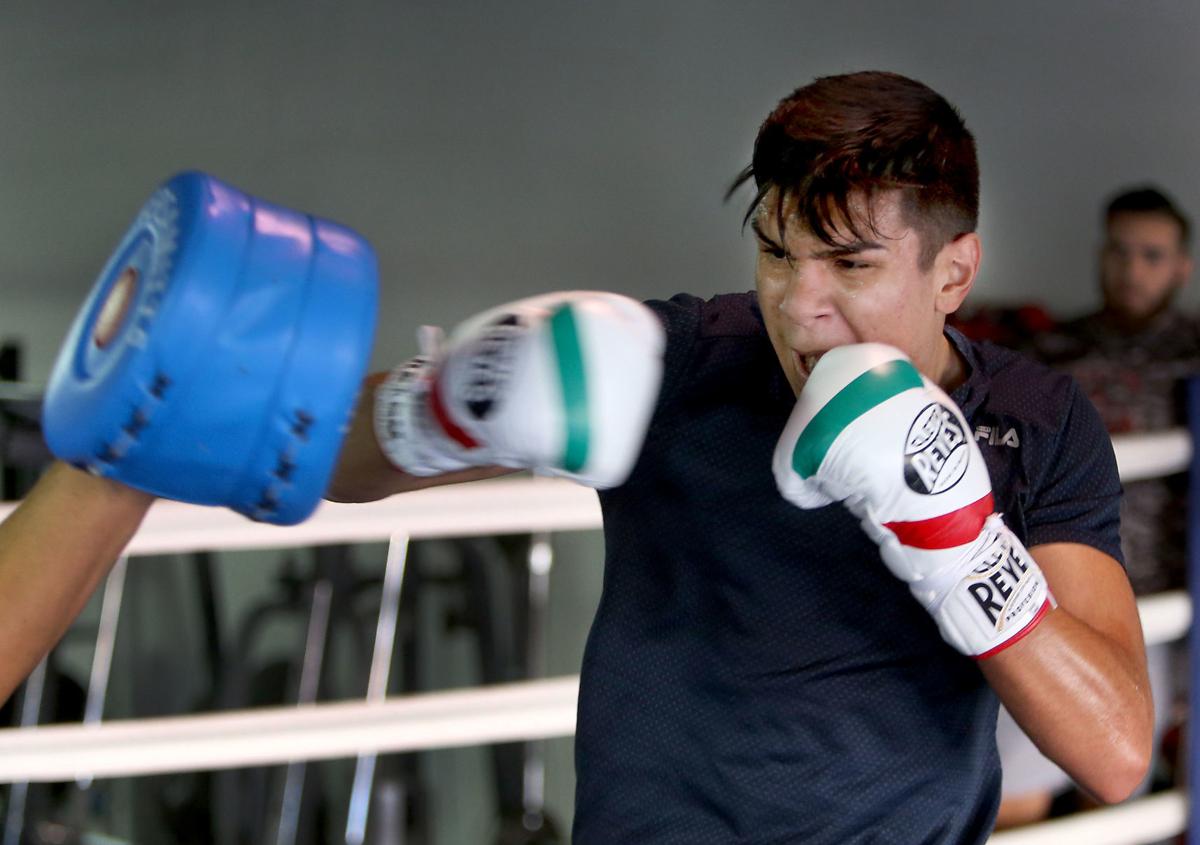 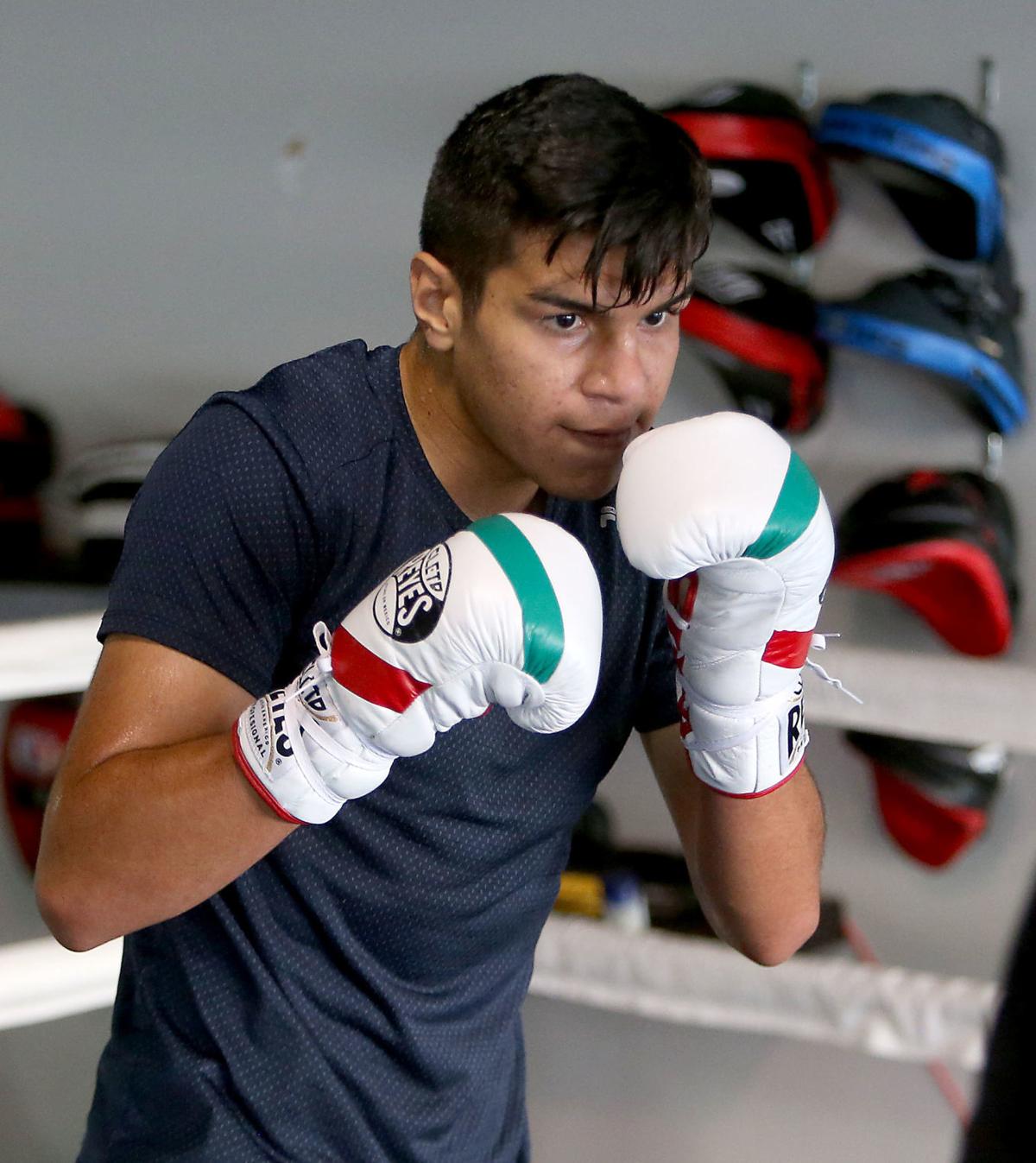 Jesus Ramos goes through his training routine June 18 at Ramos Boxing Academy in the Promenade Mall.

Jesus Ramos goes through his training routine June 18 at Ramos Boxing Academy in the Promenade Mall.

Jesus Ramos is just 18 years old, but he already has his sights set on becoming a world champion boxer. The undefeated prospect will fight again Saturday, looking to get one step closer to his goal.

Ramos (10-0, nine KOs) will battle Rickey Edwards (12-3, three KOs) in a junior welterweight (140 pounds) bout Saturday at Rabobank Arena in Bakersfield, California. The fight will be televised live on FS1, and coverage begins at 7:30 p.m.

After a five-week training camp in Las Vegas, Ramos flew into Bakersfield on Thursday.

“I had a really great training camp for this fight,” he told PinalCentral a couple of hours after his flight landed.

The Casa Grande teenager isn’t shy about proclaiming his goals for his boxing career. He said Edwards, 29, is a “game” opponent who is hungry to get his own career back on track. But Ramos has his eyes on the prize.

Ramos won’t break the record of youngest champion — that belongs to Wilfred Benitez, who won a junior welterweight title at 17 in 1976 — but if he achieves his goal, it would put him in the company of some legendary heavyweights, and an active super middleweight from Phoenix.

And in 2017, David Benavidez of Phoenix won a super middleweight belt at age 20.

Saturday’s fight will be Ramos’ second fight on national TV, as he won a unanimous decision over Kevin Shacks on June 23 at the Mandalay Bay Events Center in Las Vegas.

Specifically, Ramos said his training included significant work on his cardio and stamina. While he is a power puncher, he knows he has to be prepared to go deep into fights.

The fight against Shacks was four rounds, but the bout with Edwards is scheduled for eight. Ramos has trained to go 10 to 12 rounds, knowing he may have to go the distance at any time.

During his training in Las Vegas, Ramos did mountain runs and track work, including sprints. He also stepped up his preparation in terms of diet and sleep habits.

One of the most beneficial aspects of his training, Ramos said, was sparring with 29-year-old Keandre Gibson, a welterweight with a record of 19-2-1.

Although barely out of high school, Ramos is working like a seasoned pro. That time commitment sometimes means missing important events.

“I missed my little brother’s birthday, I missed a lot of things, but if I become a champion, it will be worth it,” he said.

While Ramos won his first nine pro fights by knockout, he was unable to do so in his last fight against Shacks.

He did, however, pitch a shutout, winning all four rounds on each judge’s scorecard.

Ramos was disappointed that he didn’t get a knockout against Shacks, and he’s looking to stop Edwards on Saturday.

“I have to make a statement and prove myself,” he said.

In the lead-up to his last fight in Las Vegas, Ramos admitted he was “really nervous” dealing with all the media interviews and fighting under the bright lights of Las Vegas for the first time. He feels more relaxed and comfortable heading into Saturday’s fight against Edwards.

And Ramos appreciates all the support he’s getting from his growing Casa Grande fanbase. He said he’s received “a bunch of messages” from people wishing him luck. He also said Ramos Boxing Academy, where he trains with his father, Jesus Sr., and his uncle, pro welterweight Abel Ramos, “has been packed.”

The support feels especially good to Ramos because it wasn’t always that way when he first told people about his boxing ambitions a few years ago.

“In the beginning, there was a lot of doubters that I could make it big in such a tough sport,” he said.

Ramos, as his father often reminds him, still has a long way to go. But it’s so far, so good for the 18-year-old prospect.

If Abel Ramos keeps performing like he did at the MGM Grand in Las Vegas on Saturday, a shot…

Next generation: Ramos wants to join the family business

BILOXI, Miss. — Jesus Ramos is about to fight someone double his age, but he isn’t taking his opponent lightly.