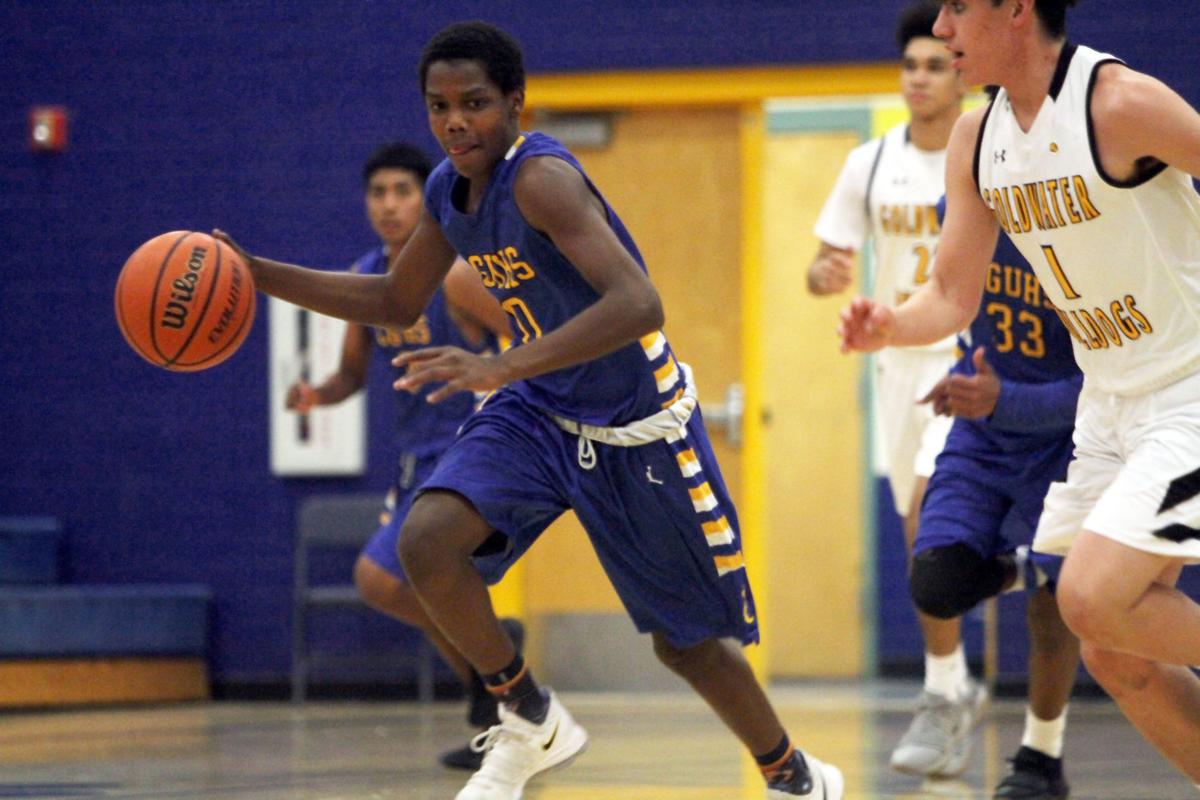 Case Grande Union’s Montae Tyler drives to the basket during the first half of the Cougars’ 82-38 loss to Phoenix Goldwater in 2017 in the Central Arizona Holiday Classic at Casa Grande Union High School. 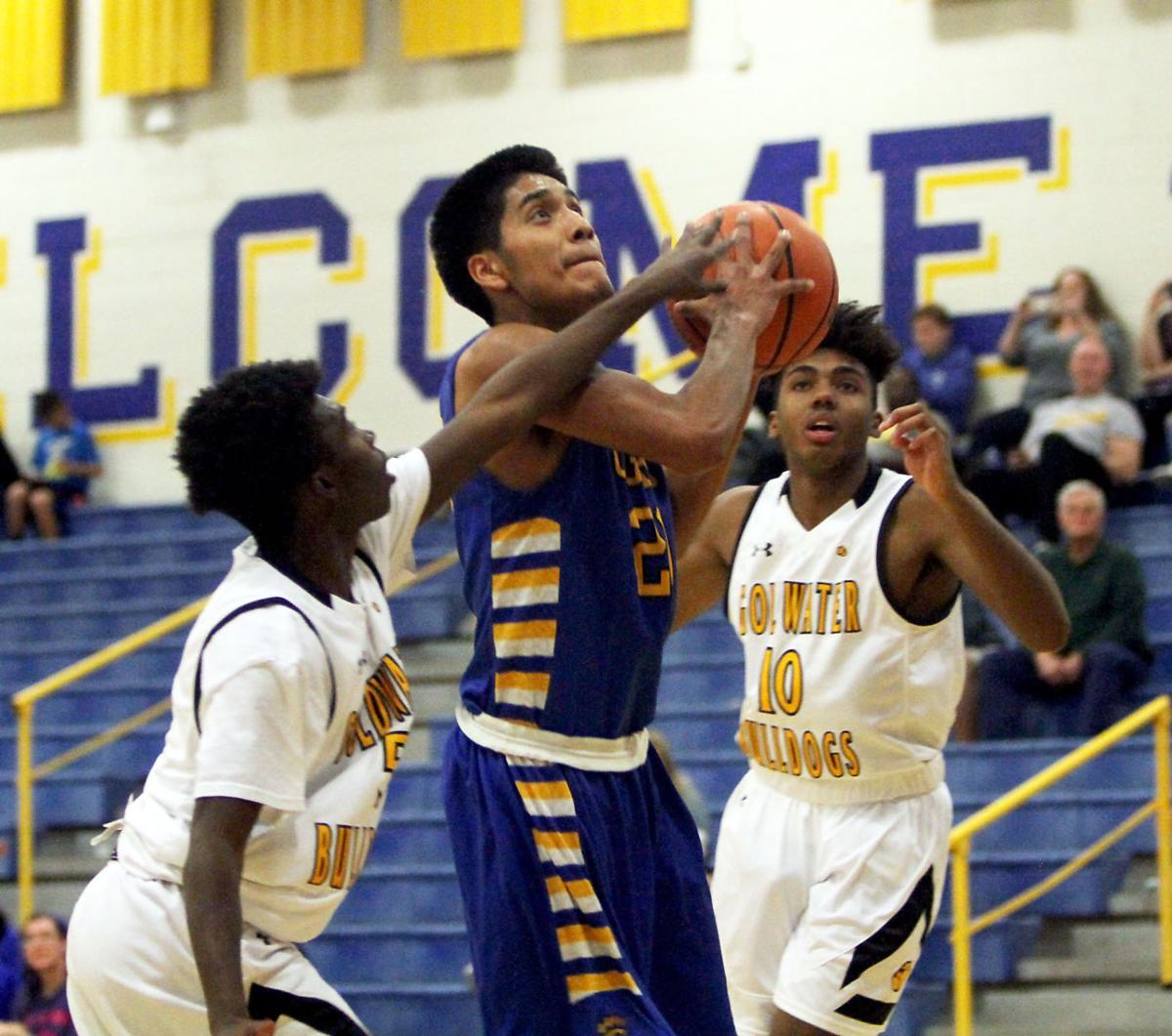 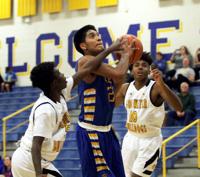 Casa Grande Union’s Gavin Carlos goes up for a shot during the second half of the Cougars’ 82-38 loss to Phoenix Goldwater on Thursday night in the Central Arizona Holiday Classic at Casa Grande Union High School.

Case Grande Union’s Montae Tyler drives to the basket during the first half of the Cougars’ 82-38 loss to Phoenix Goldwater in 2017 in the Central Arizona Holiday Classic at Casa Grande Union High School.

Casa Grande Union’s Gavin Carlos goes up for a shot during the second half of the Cougars’ 82-38 loss to Phoenix Goldwater on Thursday night in the Central Arizona Holiday Classic at Casa Grande Union High School.

It was December 2017 when Rizzo was coaching basketball at Phoenix Goldwater, and his team made the trip for the Cougars’ holiday tournament in late December.

“Going to that tournament, I saw what they got. They have a lot of athletic kids that are long and lanky like myself when I played in high school and college,” Rizzo said. “[The players] were just willing to help out (with the tournament), that was cool to see. I saw that most of them were two-sport athletes; they would be playing football and basketball, which was cool to see.”

It’s amazing how the little things happen in life, where following that season and the next season, Rizzo took time away from coaching after the birth of his son and accepted a job a Sacaton Elementary School.

But despite not coaching, the bug was still itching for Rizzo, who was named the new boys basketball coach at CG Union. He will now have plenty of time to enjoy the holiday tournament.

“My son was born halfway through my last season coaching at Goldwater and so I finished up the season and I was like, ‘Oh man I need to be at home,’” he said. “There’s daddy duties that I need to take care of, and now that he’s a little bit older, I got that (coaching) itch again.”

Rizzo takes over for Robert Peterson, who went 30-65 in four years as the Cougars head coach.

“Rob is a great guy, good guy, it’s just sometimes it just doesn’t work. It just didn’t work for him,” CG Union athletic director Randy Robbins said. “When you decide to move on in a different direction, that’s a tough conversation to have, but you have to have it. He’s a great guy and I told him if he needs a recommendation, to give [me] a call and he did.”

During his time at Goldwater, Rizzo compiled a 10-29 record in two years. Robbins said he feels Rizzo will be a perfect fit for CG Union, as both schools are Title I schools and he’s a PE teacher at Sacaton, which is a feeder school for CG Union.

Robbins added that building a program with youth clinics has been something that has been lacking for both the boys and girls basketball programs. He said other sports such as football and softball have done similar approaches where they get into the middle schools and the youth clinics, and it has transitioned to success on the field.

“That’s what we’ve doing with softball, we have club teams that feed into both schools, so that’s building,” Robbins said. “That’s what we are doing in football. We got youth programs and youth clinics. The only sport that we have not done that has been basketball — boys or girls. They only play in the season or they play club ball.

“I want coaches to develop a great high school experience for the kids and teach them the game of basketball. That’s what I’m looking for.”

It’s also something Rizzo is excited to do.

“As soon as this COVID (pandemic) ends, I want to do some camps during the offseason that’s not going to be just for the high schoolers, but I want to have the feeder school kids,” he said. “I think it’s great that I’m working at a feeder school.”

For Rizzo, it’s also an age group where kids are sometimes faced with a fork in the road in their life. They can either take one direction and a path of poor decision making, or they can go in a positive direction with the help of someone taking an interest in their life.

“I think so. You get them into the gym early and away from trouble. Just spending the extra time,” he said. “I think that is one of the better things I did at Goldwater. It was a tough area, the kids come from tough homes, and the parents weren’t always around. At Goldwater, some of the times, they would ask, ‘Can I shoot? Can I get some shots up?’ I wasn’t really coaching, I was just letting them be in the gym and staying out of the trouble.

“I would open up the gym and let them do their drills, just let them know that I’m here and I’m willing to put in the extra time.”