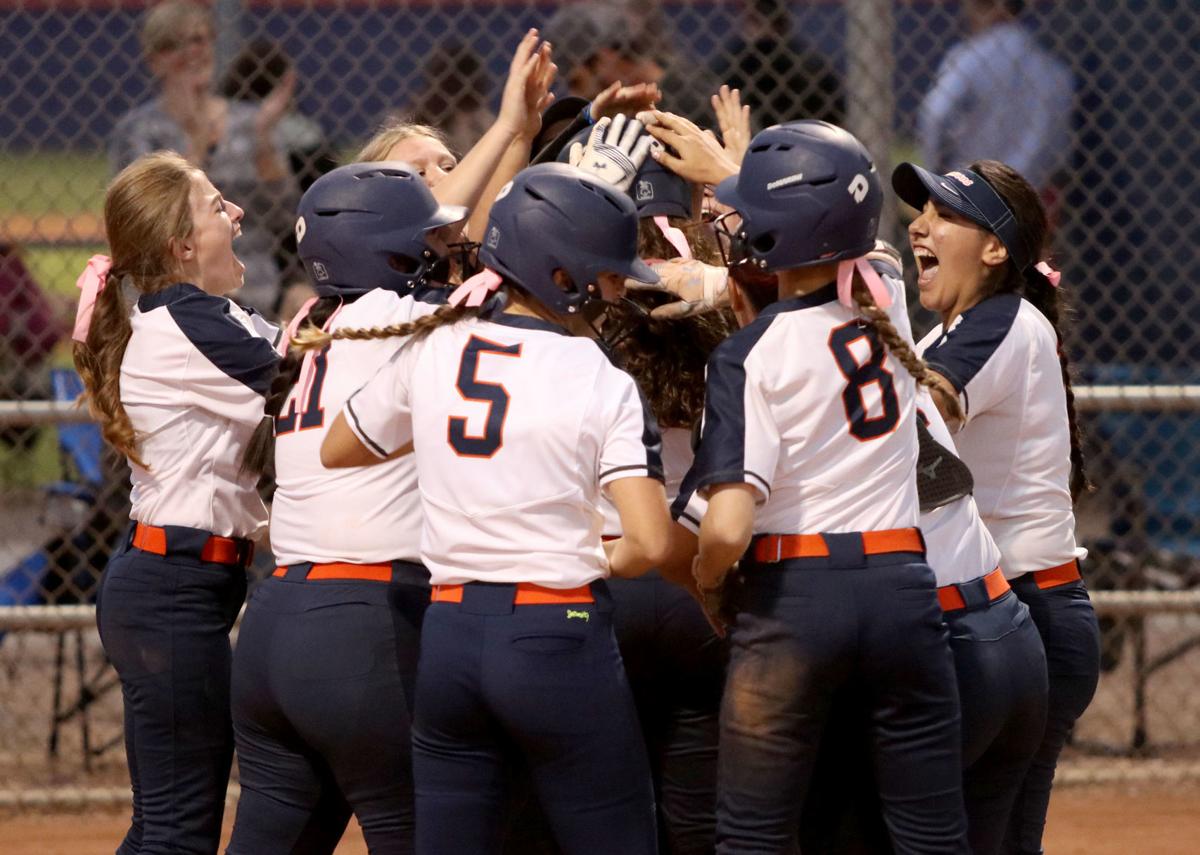 Poston Butte celebrates during a game against Combs on Feb. 28 in San Tan Valley. 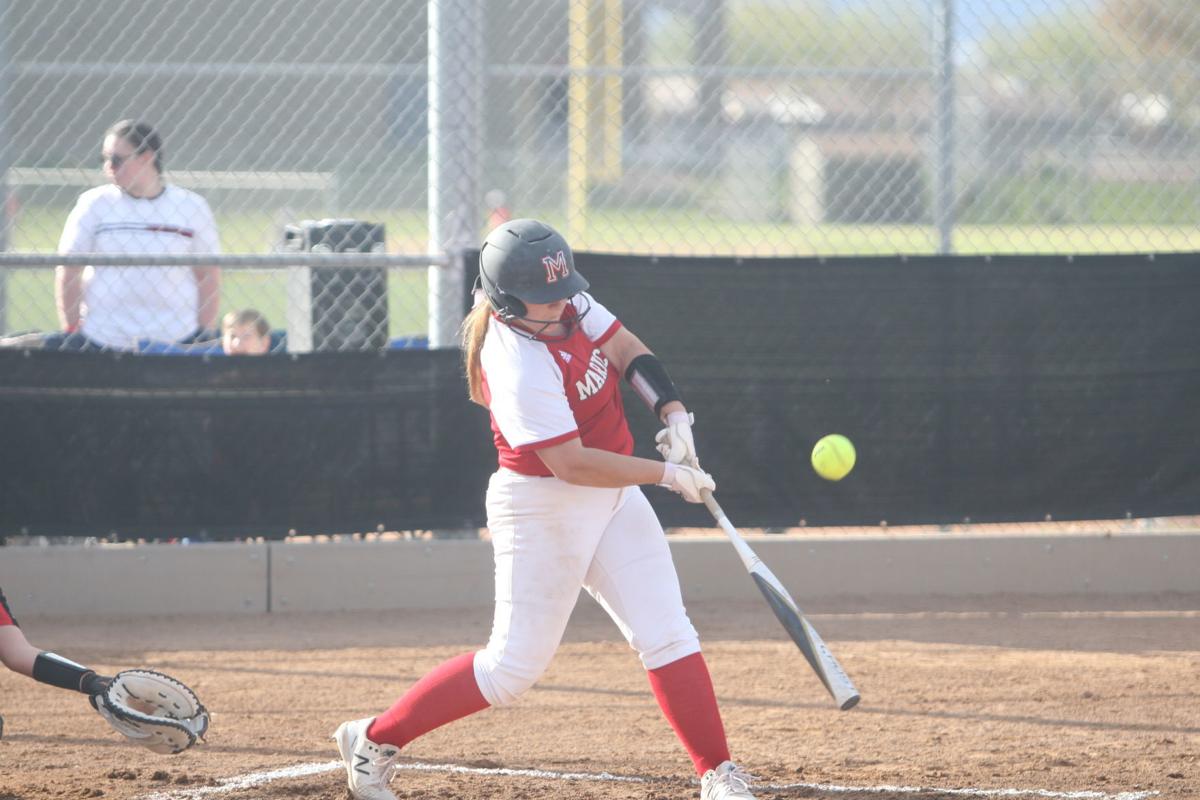 Maquela Pino squares up a pitch against Florence during the Krystin Diehl Tournament on Feb. 28. 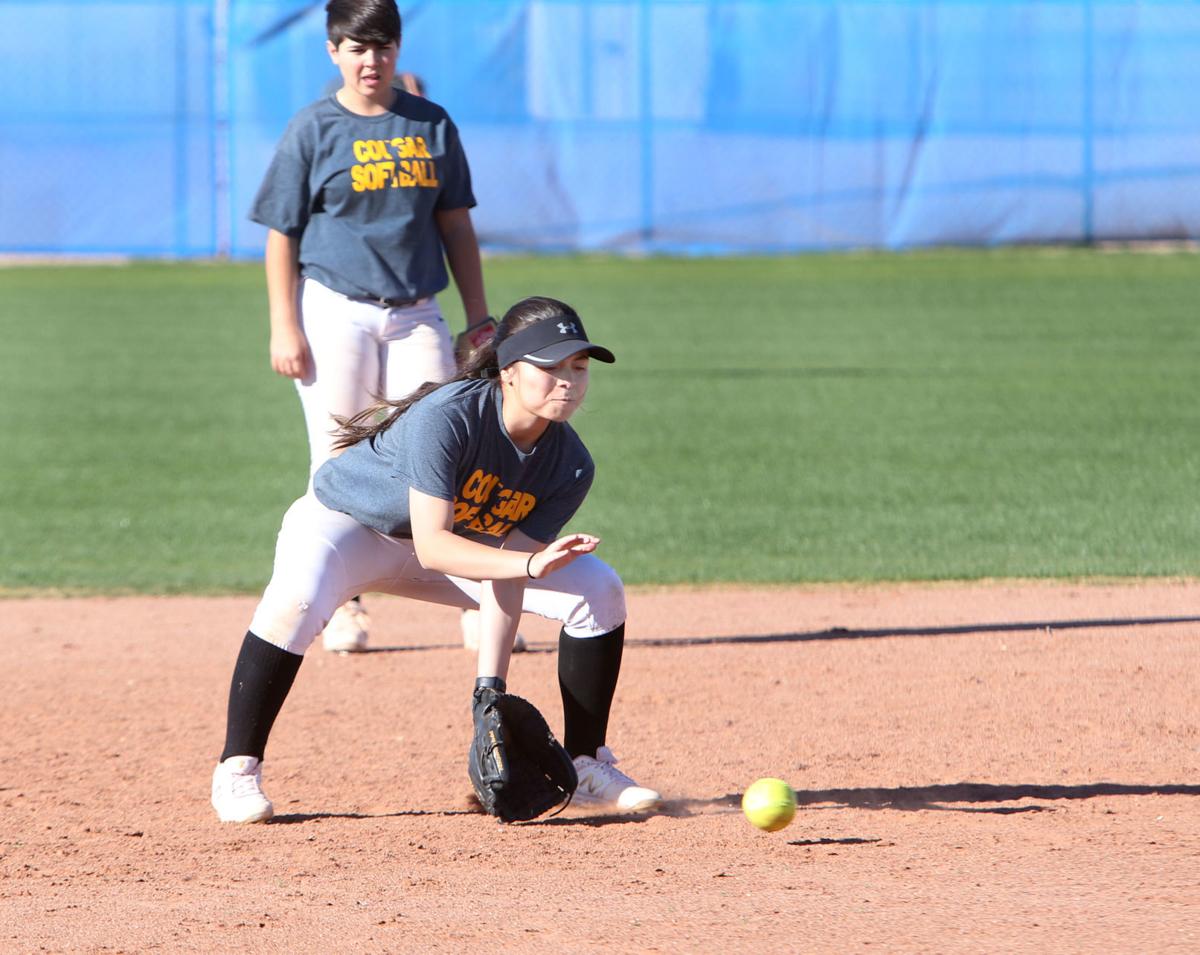 Poston Butte celebrates during a game against Combs on Feb. 28 in San Tan Valley.

Maquela Pino squares up a pitch against Florence during the Krystin Diehl Tournament on Feb. 28.

Earlier this week, PinalCentral released the first power rankings of the season for Pinal County baseball teams. There is still hope that high school sports in Arizona will resume fairly soon, but no one knows if or when that will occur due to the COVID-19 outbreak. Despite that uncertainty, here are the top softball teams in Pinal County.

If the season does resume at some point, look out for Vista Grande. The Spartans made a deep run in the 4A state playoffs last year with freshman pitcher Alyssa Tinnin dominating in the circle, and she’s only getting better. The sophomore already has 86 strikeouts in 52 innings with a 1.75 ERA. Vista Grande has a deep lineup, with five players hitting over .400, led by junior shortstop Amayah Boostedt, who is batting .600 (18 for 30) with eight doubles and two home runs.

Hot on the heels of Vista Grande is Poston Butte, another 4A state title contender. The Broncos lost ace Lindsay Lopez, who now plays for Arizona State, but Katelyn Westover has done well in the No. 1 pitcher role. In 27 2/3 innings, the sophomore has allowed just 16 hits with 25 strikeouts and a 0.76 ERA. There are dangerous hitters up and down the lineup, but none has been hotter than Kyleigh Potter, who has an otherworldly 2.419 OPS with two homers in seven games.

Proof that Pinal County has some great 4A teams, the Prospectors are another talented squad. They have outscored opponents 102-48 and are led by two outstanding players in senior Elexis Toro and junior Tristen Greer. The Prospectors can really rake, with a team OPS of .977. Toro (.556) and Greer (.512) are both hitting better than .500, and four players have an OPS over 1.000 — Toro, Greer, sophomore Addison Cooksey and senior Priscilla Saldate.

A new-look Maricopa team is turning heads. With seven players transferring in, the Rams are a totally different team than a year ago. That is most evident with transfer Gillian Gardner, a junior. Gardner is a legitimate ace who can carry a team. In just 38 1/3 innings, she has 71 strikeouts to just 11 walks with a 1.10 ERA. The offense is also producing, led by players like juniors Miquela Pino (.519, four doubles, 12 runs) and Maria Carias (.464, three doubles, home run).

The Warriors have just three games under their belt, but they have bashed their way to 59 runs scored. Their team OPS is an absurd 1.593, led by junior Lauren Shaw, who has a slash line of .600/.667/1.900 with two doubles, a triple and three homers in just 10 at-bats. Sophomore Olivia Gammill is expected to be a force in the circle despite a bit of a rocky start, and freshman Ella Verdine has eight strikeouts in 8 innings with a 3.50 ERA.

Two freshmen are pitching lights out for Santa Cruz, which is an exciting turn of events for the program. Destiny Cervantes (0.60 ERA) and Rhaylyn Tarango (0.00) are setting the tone for the Dust Devils; Cervantes has 24 strikeouts in 11 2/3 innings, while Tarango has pitched 12 scoreless innings, fanning 16. There are six freshmen on the varsity, and they are also carrying the offense. Elyana Garza is hitting .571 with seven RBIs.

Off to a 3-5 start, the Cougars are nonetheless a team to watch, mostly due to star pitcher Jessica Mercado. The senior is as good as any pitcher in the state, and she has a magnificent strikeout to walk ratio of 71-to-six in 44 innings with a 0.95 ERA. Casa Grande is relying on several freshmen and a very young supporting cast. The bats are not producing much so far, but expect the hitting to improve.

Despite a record of 2-4, Florence has outscored its opposition. That’s largely due to a 26-0 victory over Chandler Valley Christian (0-7) on March 3. There is talent on the roster with players such as Riley Ecenbarger and Alexis Padilla, just to name two. The Gophers will need better pitching to turn things around. Ecenbarger (1.116) and Kendall Drake (1.029) are hitting well, while Jonnie Cornett has two homers, a double and eight RBIs in just three games.

A 3A playoff team last season, Coolidge has stumbled out of the gate. The Bears have lost four of their first five games, being outscored 72-55. They are scoring runs but have not done anything to prevent the opposition from scoring. Senior first baseman Tatyiana Rushing can really mash, but Coolidge has to get better pitching to compete.

Combs made the postseason last year, but things aren’t looking as promising in 2020. The Coyotes have lost their first four games, scoring just 14 runs. Senior Reagan Foster is one of the best players in the county, but she needs some help. Foster has a double, triple and a homer already, but she has struggled in the circle. Senior Kailyn Aikens has a double, triple and four RBIs.

Expectations are simple for San Tan Foothills — it just wants to improve and set a foundation for future success. The Sabercats went 2-17 last season. They already picked up one win this year, a wild 20-19 victory over 1A Kearny Ray. Pitching is the biggest weakness for San Tan Foothills, as it has allowed 51 runs in four games.