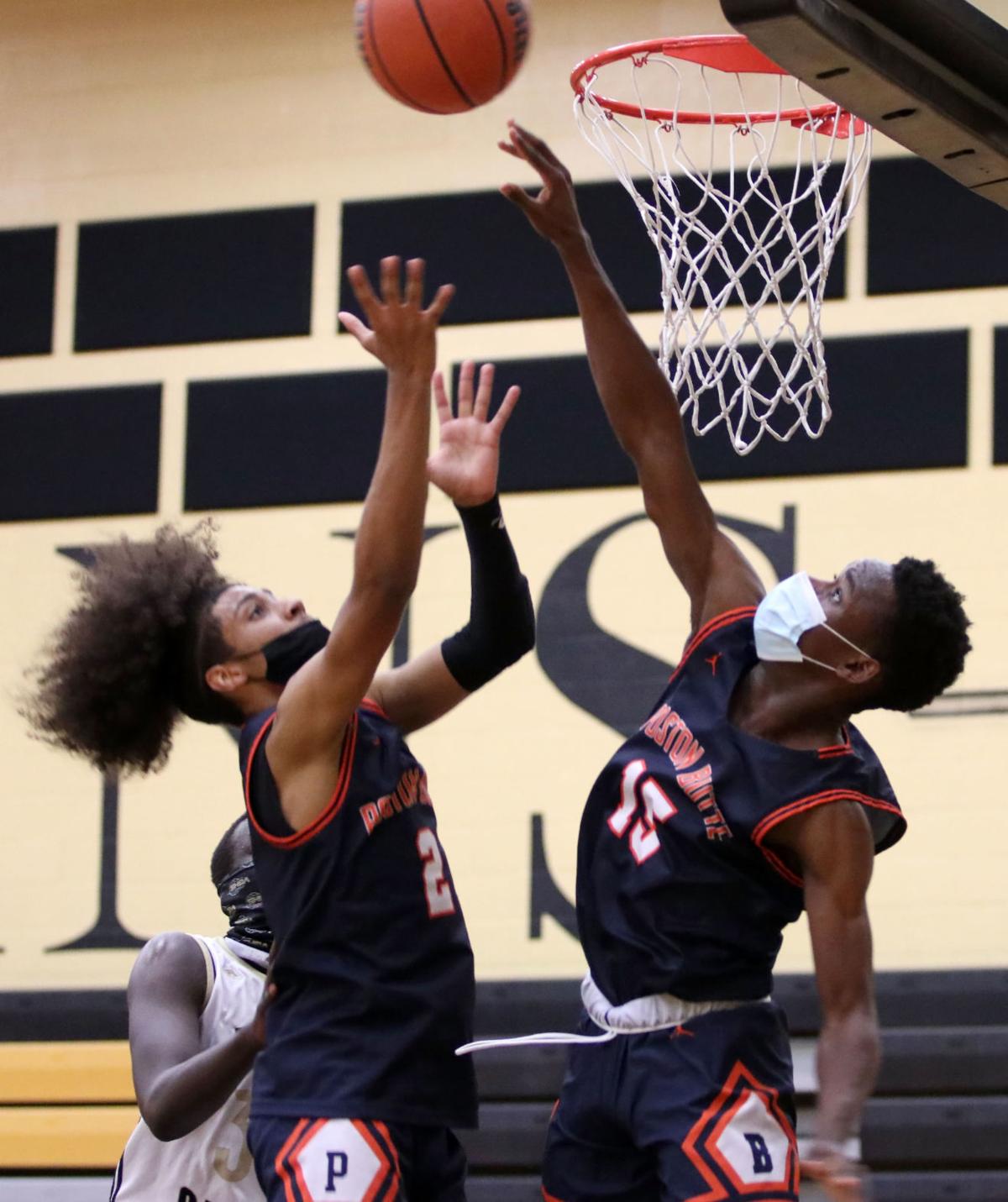 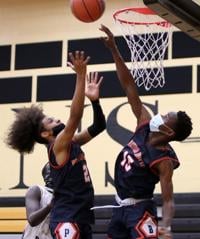 Poston Butte's Travalle Beckwith, left, and Edmond Touye reach for a rebound against Vista Grande on Jan. 22 in Casa Grande. 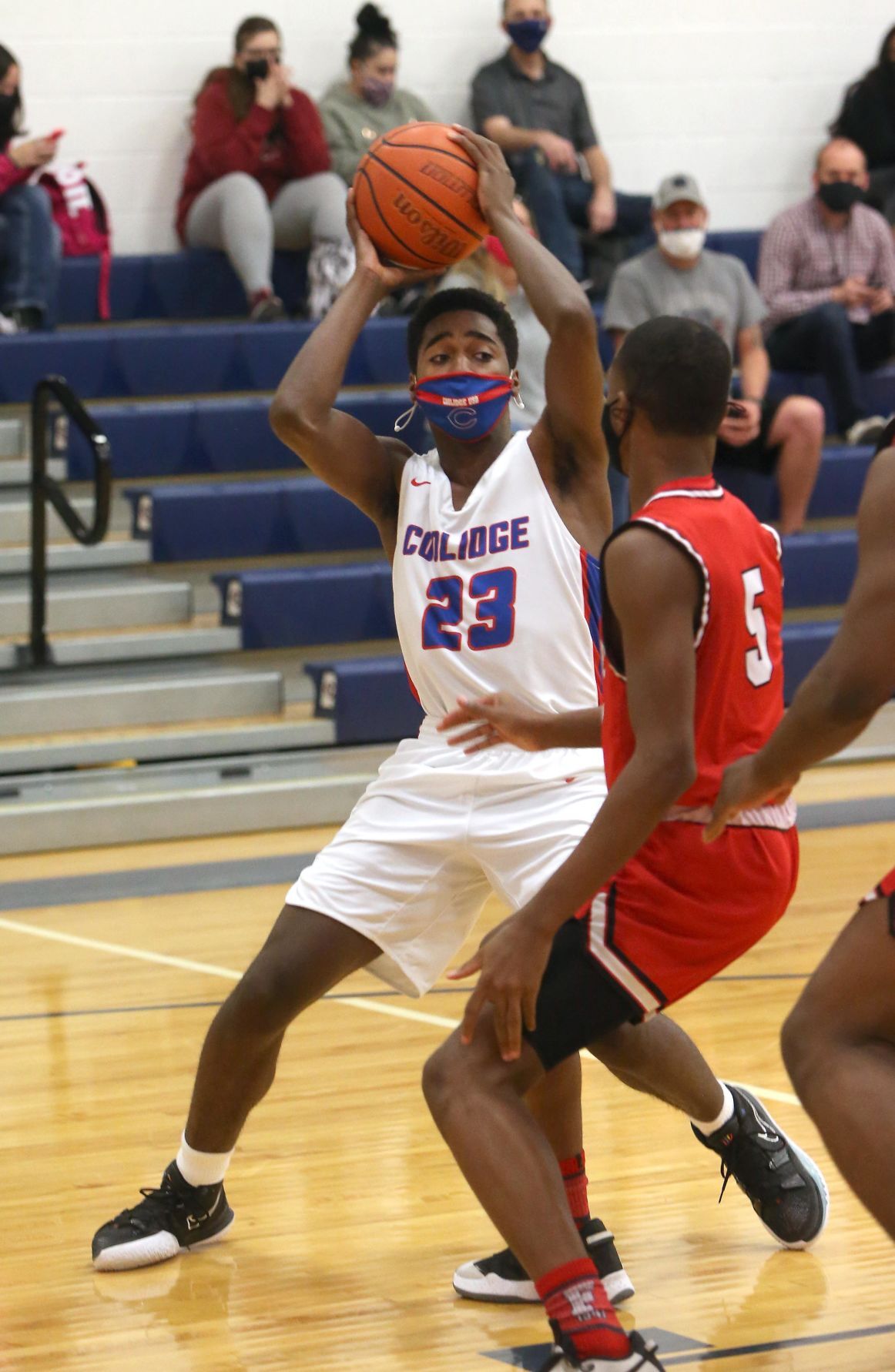 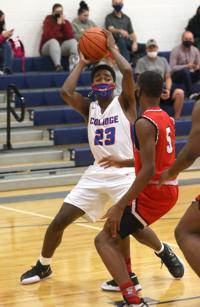 Coolidge’s Kam Steward looks to pass while being defended by Florence’s Eddie Chapple on Feb. 12 in Coolidge. 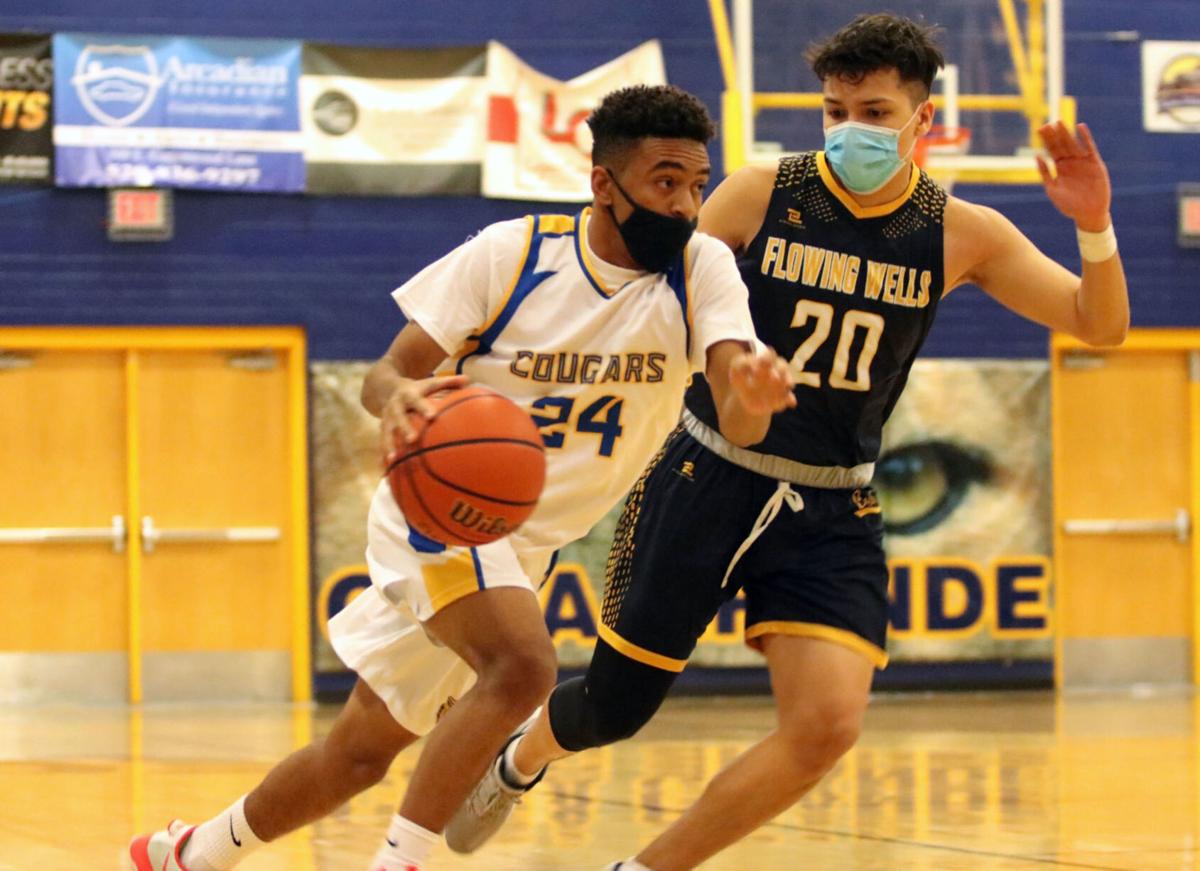 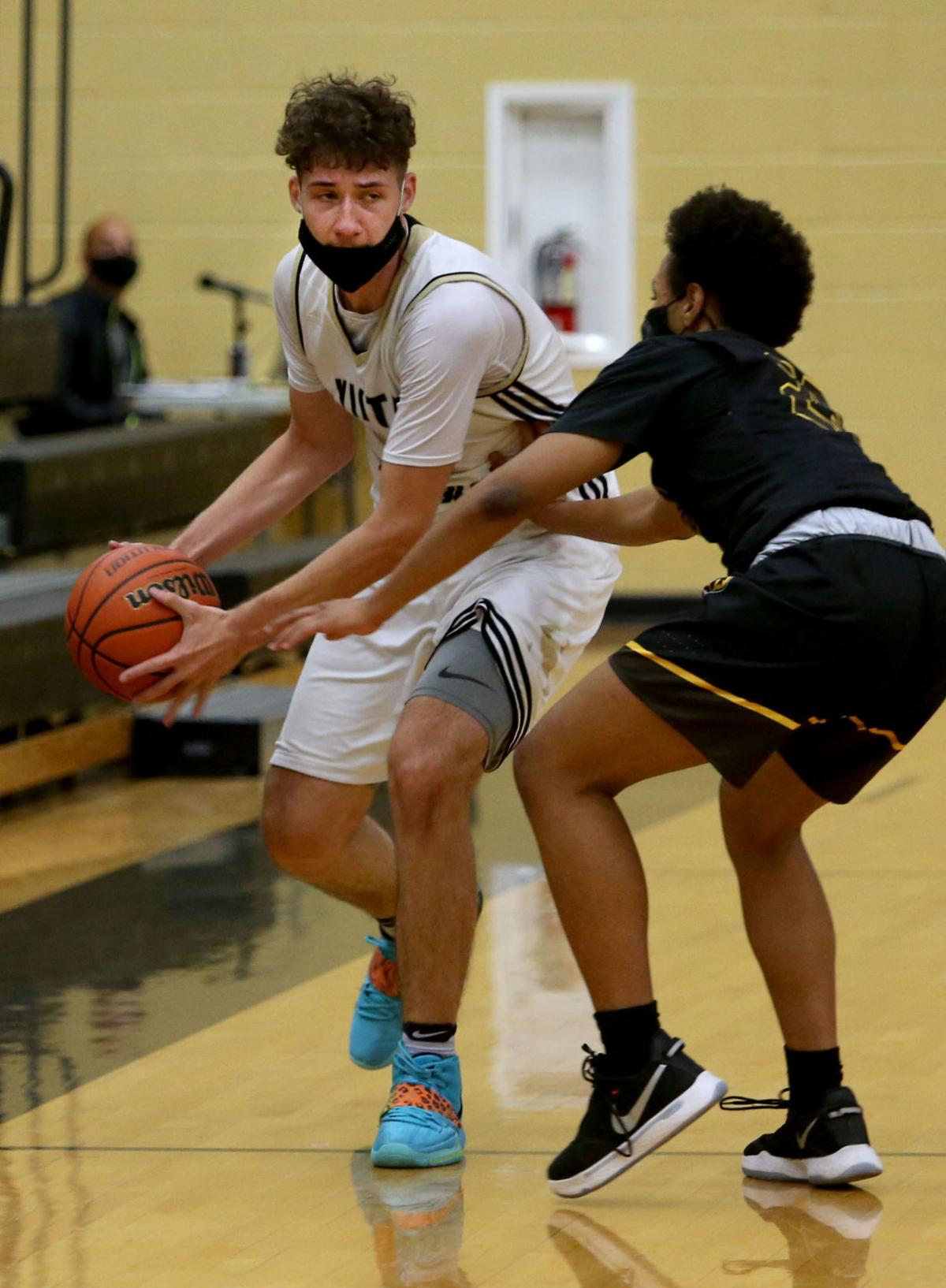 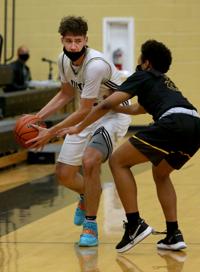 Poston Butte's Travalle Beckwith, left, and Edmond Touye reach for a rebound against Vista Grande on Jan. 22 in Casa Grande.

Coolidge’s Kam Steward looks to pass while being defended by Florence’s Eddie Chapple on Feb. 12 in Coolidge.

With a pandemic-shortened regular season in high school basketball, there are just a handful of games left for most teams before the playoffs begin. Here’s a look at the latest PinalCentral boys basketball power rankings.

Another dramatic overtime win against Coolidge on the road was a big boost for Florence last Friday. The Gophers followed that up by hammering San Tan Foothills 64-34 on Tuesday. Malik Payton had 19 points, 13 rebounds and five assists in the win, and the team shot a scorching 60.5% (26 of 43) from the field. Florence is No. 4 in the state’s 3A rankings.

The losing streak against rival Florence ran to 12 after a 55-50 overtime loss at home last Friday. But it was another classic game, and the Bears showed plenty of fight. Coolidge bounced back with an impressive road win against Thatcher on Tuesday, and Nick Harrison led the way with 18 points. Two less heralded players also scored in double figures, as junior Mark Clegg and sophomore Dru Madrid each had 10 points.

The Broncos are fighting to get in position for a postseason berth. The top 16 teams qualify for the state playoffs, and Poston Butte is No. 20 in the 4A rankings. In the last week, the Broncos picked up wins over No. 35 Phoenix Shadow Mountain and No. 41 Chandler Seton Catholic and lost to No. 16 Peoria. Travalle Beckwith dropped 21 points against Seton Catholic, and Jess Gray had 15 points against Peoria.

Speaking of state playoff spots, ALA-Ironwood is in position, as it’s ranked No. 13 in 3A. The Warriors have been hot lately, but their five-game winning streak was snapped with a 54-47 loss to No. 11 Queen Creek Benjamin Franklin on Tuesday. Senior guard Kyree Jackson has scored at least 21 points in five straight games, averaging 24.8 points during that span.

Vista Grande in the same spot it was last week after losing four straight because no team below it made a strong case to move up. The Spartans have a very short bench and are forced to play a six- or seven-man rotation. But they have two stars in 6-foot-4 Devin Bradford, who had 30 points and 17 rebounds in a triple overtime game against Tempe Marcos de Niza on Tuesday, and 6-foot-7 junior Chris Long.

After blowing out Vista Grande by 30 on Feb. 5, Combs looked prime to go on a run. Instead, the Coyotes lost their next four games. They were competitive in losses to ALA-Ironwood and Marcos de Niza, but lost by 17 to No. 14 Gilbert Mesquite and by 24 to No. 5 Tucson Pueblo. Shot making has been a struggle for Combs, which is shooting 37% from the field.

A rash of overtime games struck Pinal County in the last week, and Casa Grande played in two of them. The Cougars beat Tucson Cholla 81-79 in double overtime last Thursday, and they also lost 68-66 in overtime to No. 17 Tucson Flowing Wells on Wednesday. Casa Grande is improving, and Anthony Flores was terrific with 26 points against Flowing Wells.

Last Friday was big for Maricopa. The Rams came into their game against Mesa Westwood on a seven-game losing streak. But they got a much needed win, knocking off the Warriors 45-43. Junior forward Merhauti Xepera, also a talented football player, had a big night against Westwood with 16 points and 16 rebounds, while Justin Stovall added 17 points and seven assists. Maricopa’s next game was a 60-49 loss to Mesa Dobson on Tuesday.

The Sabercats only played once in the last week, but it was not a good result. They were blown out 64-34 by Florence on Tuesday, their sixth straight loss. Brian Turner had 12 points, but he and the rest of the Sabercats had a rough night offensively, shooting 29% as a team. While Florence is very good, San Tan Foothills played it earlier this season and lost by just eight points.

Things didn’t get any better for the Pumas in the past week, as they lost 97-36 to No. 12 Mesa Sequoia Charter and 98-15 to No. 3 Scottsdale Rancho Solano Prep. While both of those scores indicate many areas that need improvement, there’s no doubt that defense is the biggest area of concern for the Pumas.

The Dust Devils had just one game in the last week, and they were defeated 72-38 by Phoenix Veritas Prep. Santa Cruz is still searching for its first win, but it’s running out of chances. Only three games remain on its schedule — a home game against No. 25 Phoenix Christian on Friday followed by road games against No. 7 Phoenix Country Day next Tuesday and No. 32 Heritage Academy Laveen next Friday.