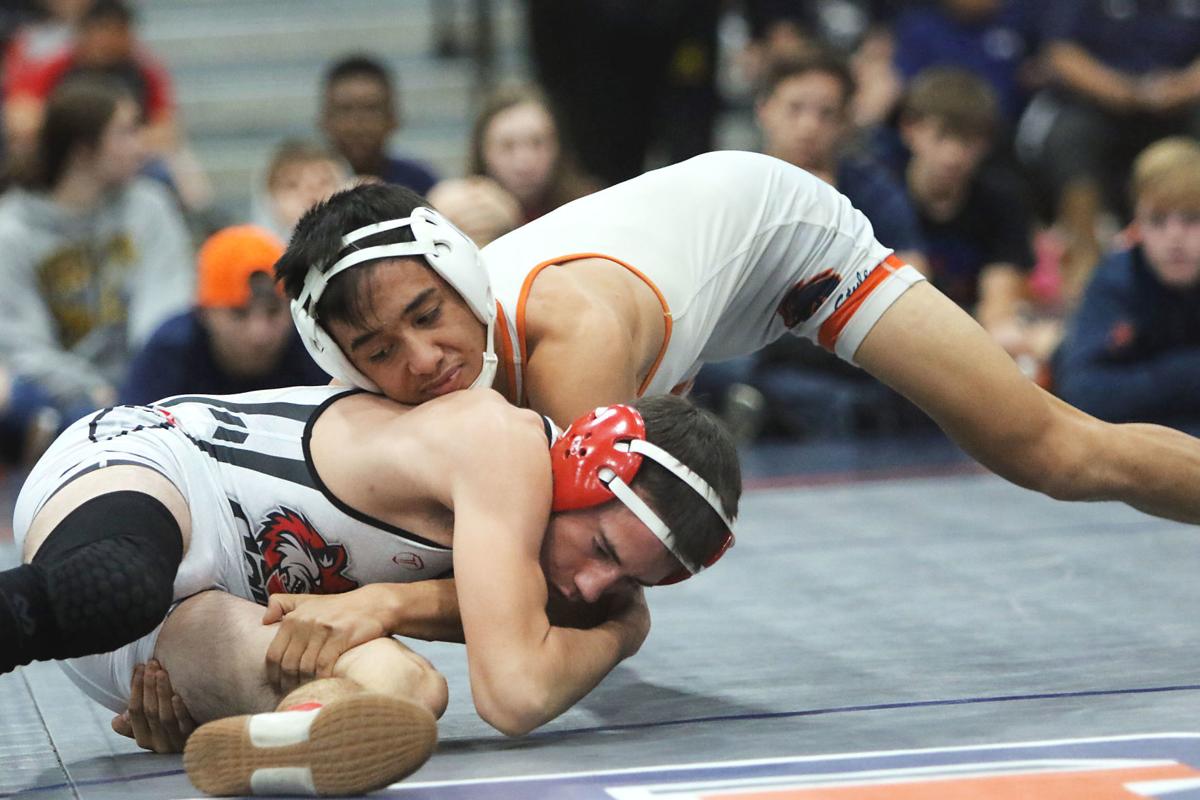 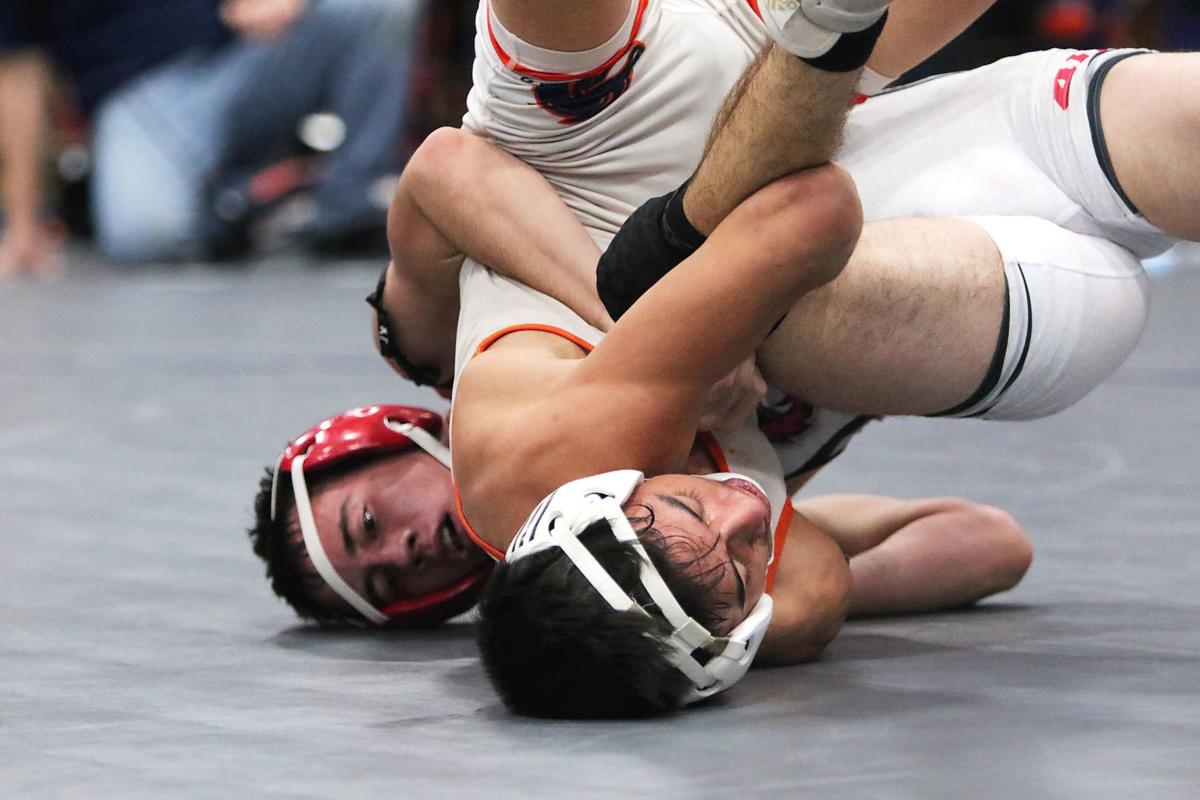 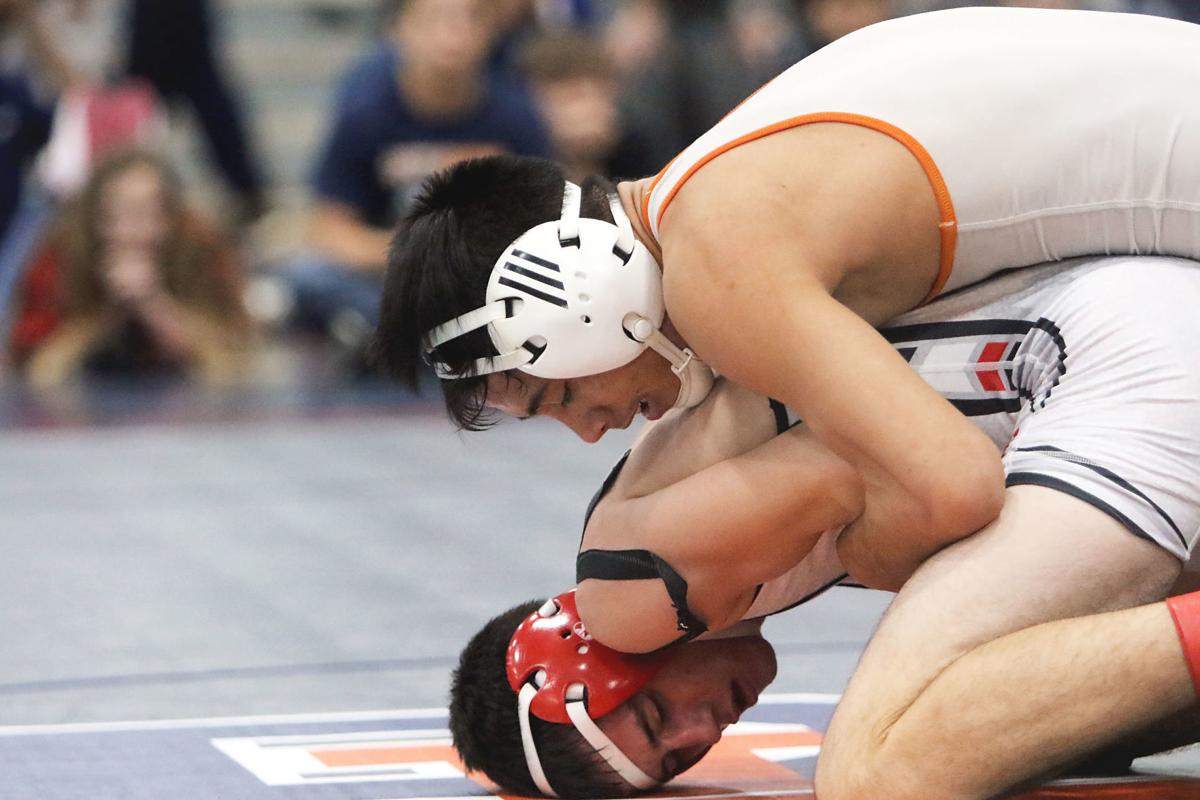 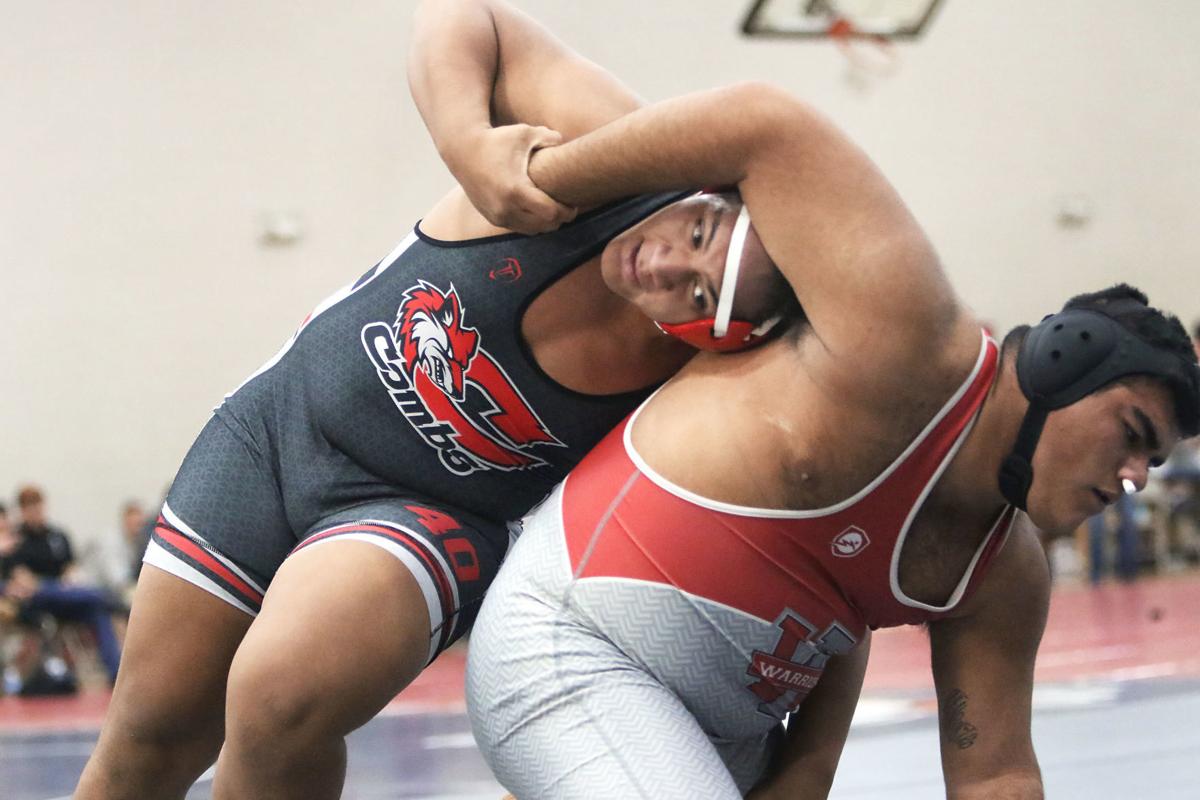 Combs’ Taniela Taunima and American Leadership Academy-Ironwood’s compete in the semifinal round of the 285-pound weight class Saturday at the Division III Section II tournament in San Tan Valley.

Combs’ Taniela Taunima and American Leadership Academy-Ironwood’s compete in the semifinal round of the 285-pound weight class Saturday at the Division III Section II tournament in San Tan Valley.

The takedown gave Taunima a 4-2 lead going into the third and final period and eventually a 5-4 decision win that punched his ticket to next week’s Division III state meet at Findlay Toyota Center in Prescott Valley.

“I’m real proud of the fact that we had five finalists,” Combs coach Travis Miller said. “I didn’t count across the teams, but I don’t’ think nobody had as many in the finals as we did.”

Along with Taunima, the Coyotes also sent Shawn McDougal (120), Michael Davenport (132), Seth Fernandez (145) and Cody Owen (152) to the finals, with three of them coming in first, while Zavier Fernandez placed fourth at 126.

As a team, Combs finished second with 147 points behind Mesa Thunderbird’s 165.

“That’s a little sad because we wanted to repeat as champions,” Miller said of the second-place finish. “But you know what, we still have six guys going to state and three champions from this tournament. I think we are going to score a lot of points at state.”

Host team Poston Butte finished fourth with 141 points. The Broncos are sending five wrestlers to Prescott Valley a year after they sent just two wrestlers and two years after sending just one.

Apache Junction finished sixth with 116 points after qualifying five wrestlers for the state.

Ethan Wright will lead the Prospectors at 182 and Preston Lindstrom at 220, both finished first. Joining Wright and Lindstrom at state will include Cody Arbogast who placed second at 195, while Blaine Lira (106) finished third and Nathan Munoz (170) placed fourth.

“We had a couple guys fall through but we’re young and we’re old,” Apache Junction coach David Smith said. “The young guys fell down today and the old guys came through, and we have a lot of seniors going to state.”

A total of 47 wrestlers from Pinal County qualified for the state tournament. Here’s a recap of who’s heading to Prescott Valley this weekend.

Santa Cruz Valley: The Dust Devils will have 12 wrestlers heading to state as Santa Cruz looks to repeat its team title. Leading the way this year will be Davian Guanajuato who will put his 39-0 record on the line this weekend after taking first at the sectional tournament. Other qualifers for the Dust Devils include Daniel Guanajuato (106), Derek Guanajuato (120), Emillio Ysquirre (125), Joaquin Jimenez (132), Wyatt Ogle (138), Evan Clute (152), Hunter Ogle (160), Emilio Gobea (170), Diego Chavez (182), Tanzor Gil (220) and Faustino Chaydez (285).

Casa Grande: The Cougars will send five wrestlers to Prescott Valley, led by Damian and Rafael Quiroz. Damian qualifyed at 126, while Rafael qualifed at 132. Joining them will be Gunner Garey (113), Dayton Lewis (138) and Jake Slyvestre (145)

CG teen a pioneer for girls wrestling in Pinal County

PRESCOTT VALLEY — A sixth-place finish may not have been what Briana Quiroz had in mind, but it will live on in school history.

PRESCOTT VALLEY — Of the 49 wrestlers that competed in this weekend’s state wrestling tournament, Pinal County came home with 19 state placers…