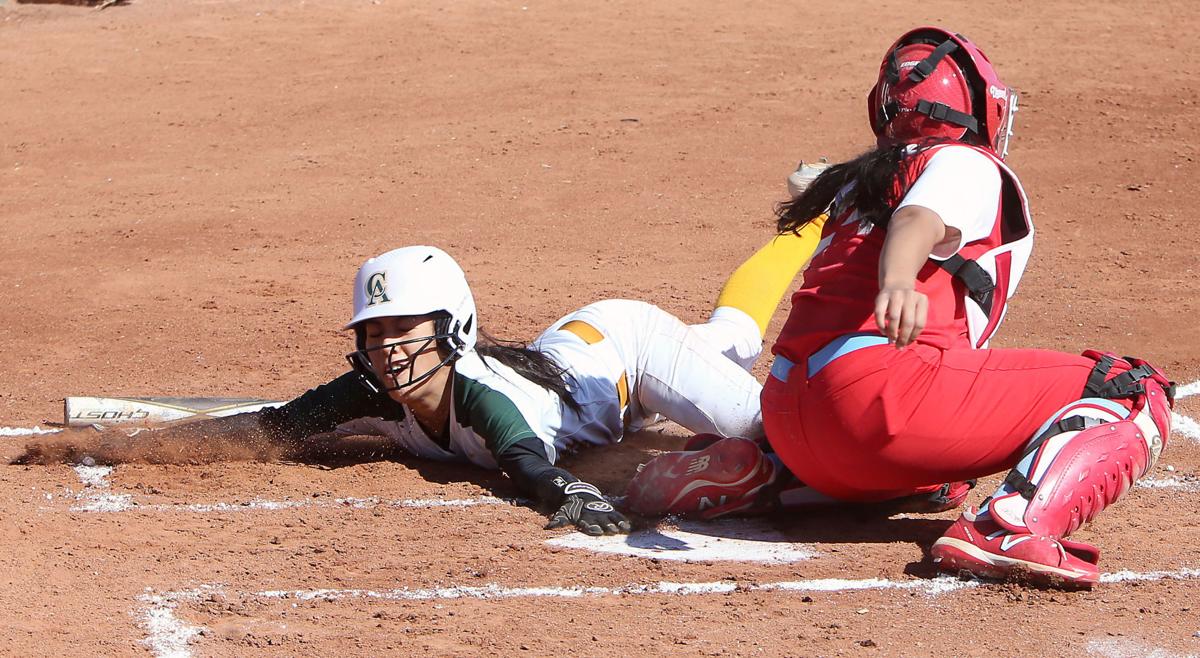 Central Arizona runner Serrina Cabral slides safetly into home while Mesa Community College and former Combs catcher Absidee Sanchez tries to block the plate during the first inning of the Vaqueras’ doubleheader sweep of the Thunderbirds on Tuesday at CAC. 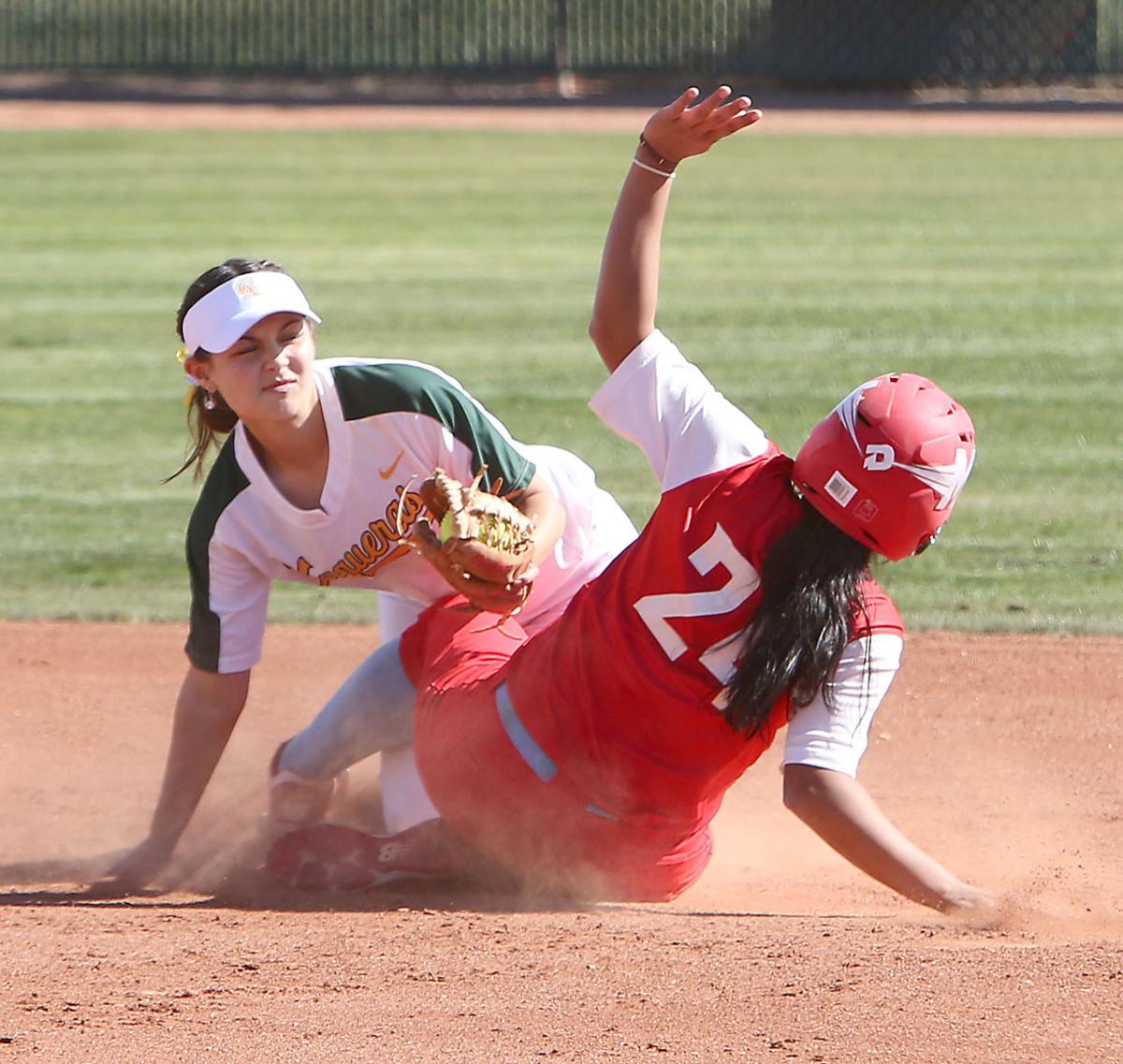 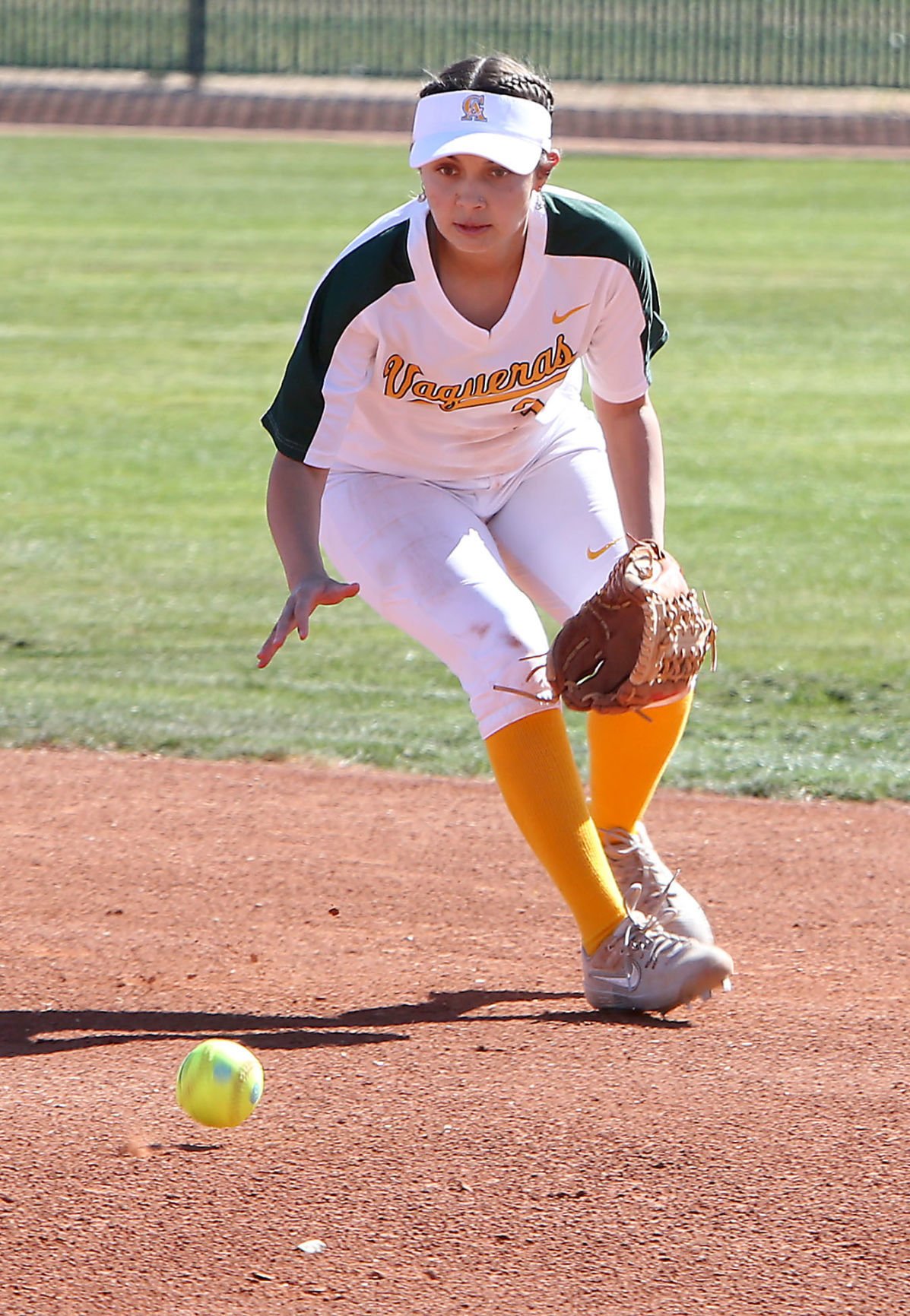 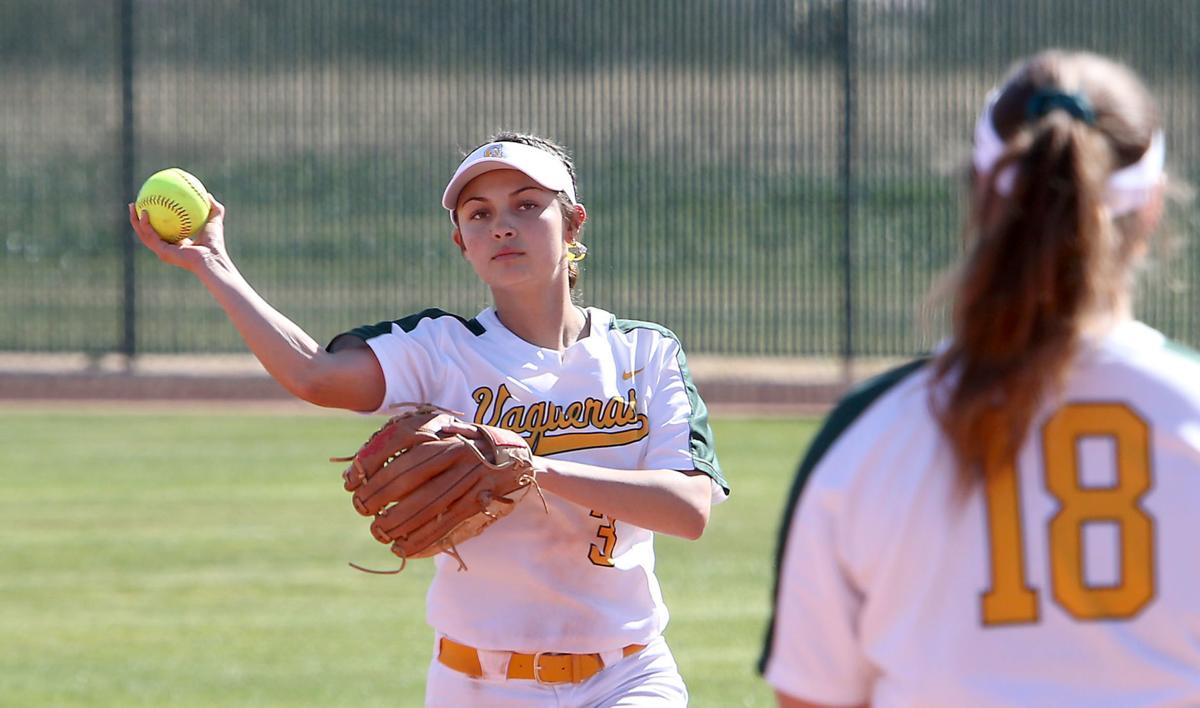 Central Arizona runner Serrina Cabral slides safetly into home while Mesa Community College and former Combs catcher Absidee Sanchez tries to block the plate during the first inning of the Vaqueras’ doubleheader sweep of the Thunderbirds on Tuesday at CAC.

The Vaqueras defeated Mesa 6-4 and 7-5 on Tuesday in their home debut, overcoming deficits of 3-1 in the opener and 4-2 in Game 2. Central got enough pitching, defense and timely hits to sweep the Division II Thunderbirds despite some fielding and baserunning blunders.

Freshman right-hander Sarah Norton retired 12 of the 13 batters she faced in the second game, including the last 11. Second baseman Nicol Ley saved two runs in Game 1 by making a diving stop with the bases loaded in the sixth for an inning-ending forceout. That game ended with former Casa Grande Union standout Amaya Dasti throwing out a runner at the plate from right field.

Serrina Cabral and Michaela Kittredge delivered two-run doubles in the fourth inning of the opener, as CAC scored five runs to take a 6-3 lead. Chloe Krason went 5 for 6 in the doubleheader, and her fourth-inning RBI single off Mesa reliever Alyssa Matus snapped a 5-5 tie in Game 2. Ley was 4 for 4 with four runs scored in the second game.

After going 1-4 in last week’s season-opening slate of games in Henderson, Nevada, Tuesday’s performance was undoubtedly a step in the right direction.

“We still need to clean some things up,’’ CAC coach Shelby Davis said. “But when we needed some big hits, we executed. And we made some clutch (defensive) plays to preserve the win” for Game 1 pitcher Trinity Valentine.

The lone hit off Norton was a one-out single in the fourth. That runner eventually scored on an error – one of three unearned runs for Mesa (6-2, 0-2 ACCAC). Norton struck out two in the fifth and the last two batters in the seventh.

“She’s coming off an injury and only been throwing a couple of weeks,” Davis said. “She’s only going to get better. She just needs to get some innings.”

Valentine allowed 12 hits and three walks in the opener, as Mesa put the leadoff batter aboard in five of its seven at-bats. The Thunderbirds, who had at least two runners on base in all but one inning, wound up stranding 11 – five in scoring position.

“Trinity shut them down when she needed to,” Davis said.

Mesa snapped a 1-1 tie with two runs in the third. Jaden Encinas had an RBI triple – one of five extra-base hits for the Thunderbirds – and scored on Brittany Walkingstick’s sacrifice fly.

Central batted around in the fourth against Mesa pitcher Abril Nerey. Isabel Gallo’s RBI single put the Vaqueras ahead to stay following Kittredge’s two-run double, and Cabral’s two-run double extended the lead to 6-3.

Sonia Solis had an RBI groundout in the CAC first.

Taylor Brown’s two-run double off CAC starter Devan Dickson staked Mesa to a 2-0 lead in the first inning of Game 2. The Vaqueras got one back in the bottom of the frame on a sacrifice fly by Solis following Ley’s triple.

Dasti’s RBI single in the CAC second made it 2-2.

After Mesa went ahead 4-2 with two unearned runs in the third, the Vaqueras sent eight batters to the plate in their half in taking a 5-4 lead. Among their five hits off Mesa starter Jadin Placencio were RBI singles by Krason and Danielle Farinas. The other run scored on Kittredge’s sacrifice fly.

Solis, who went 3 for 4, gave Central a two-run cushion with her RBI double in the sixth.