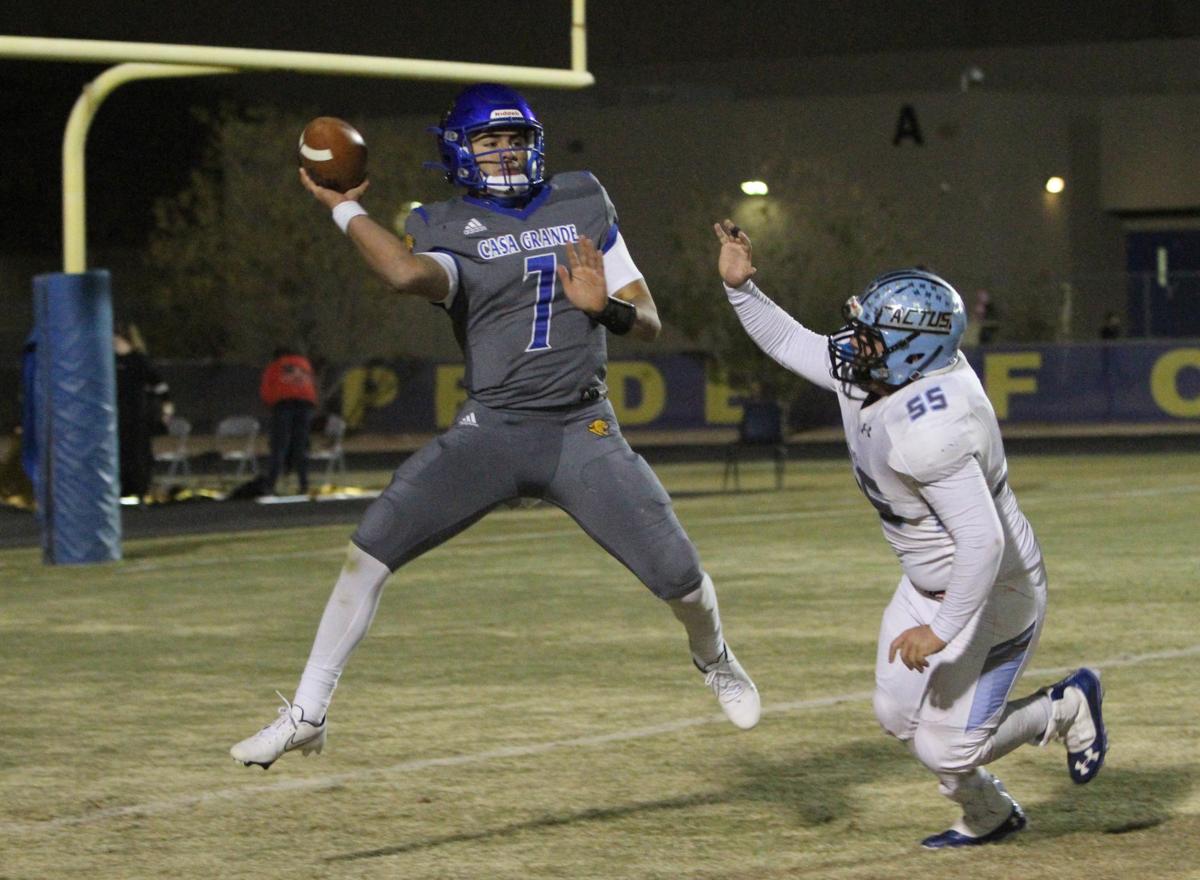 Casa Grande junior quarterback Angel Flores throws a pass while under pressure during a 4A state semifinal game against Glendale Cactus on Dec. 4, 2020, at Al Van Hazel Stadium. 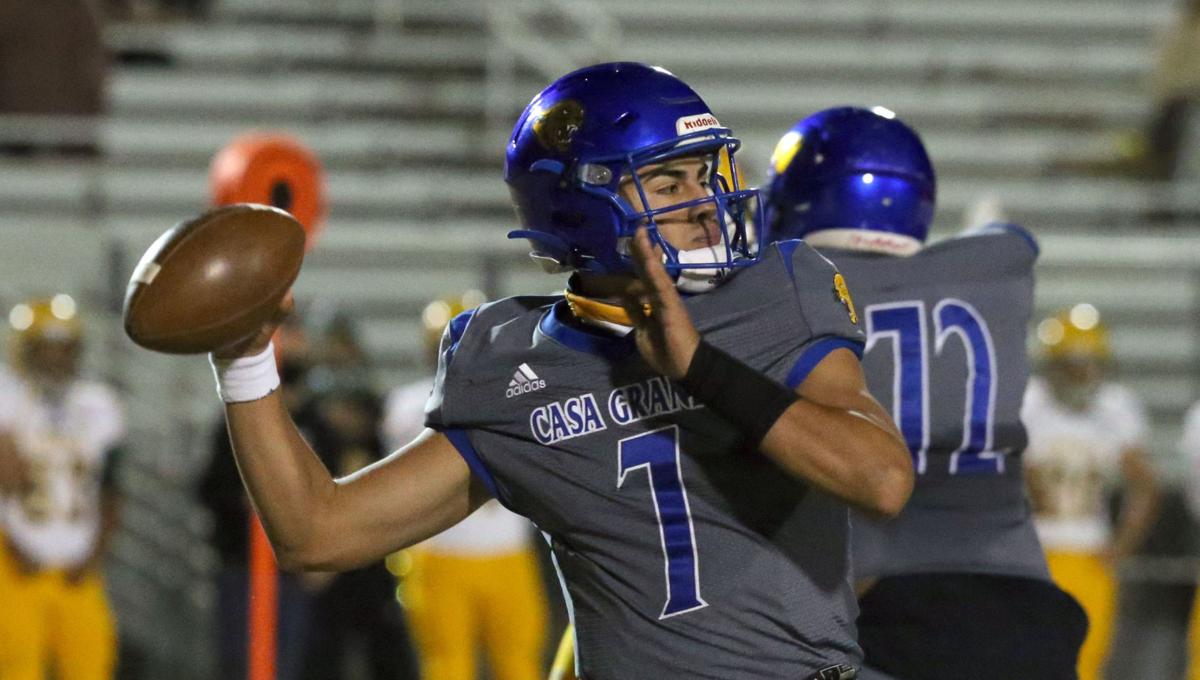 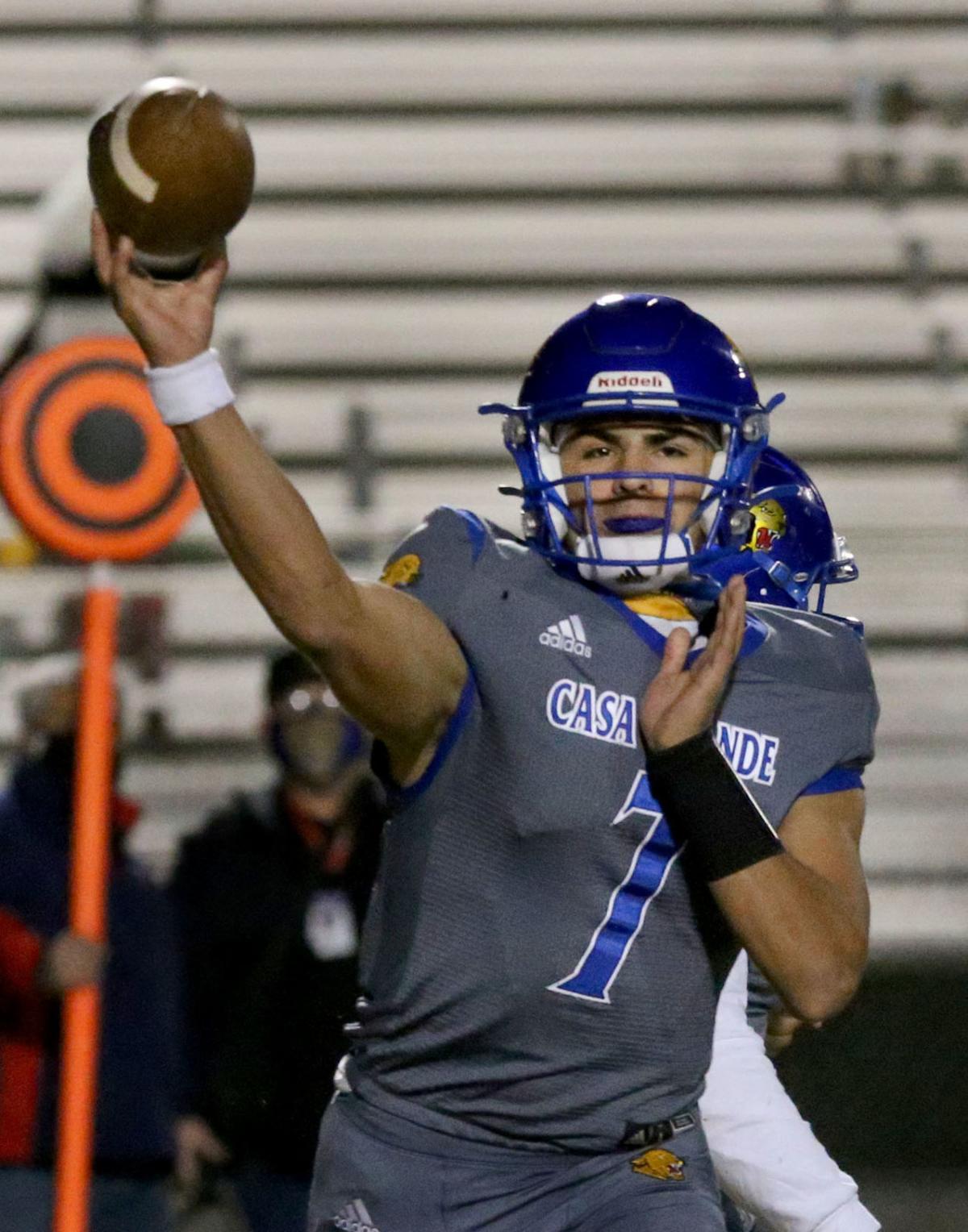 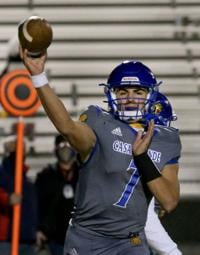 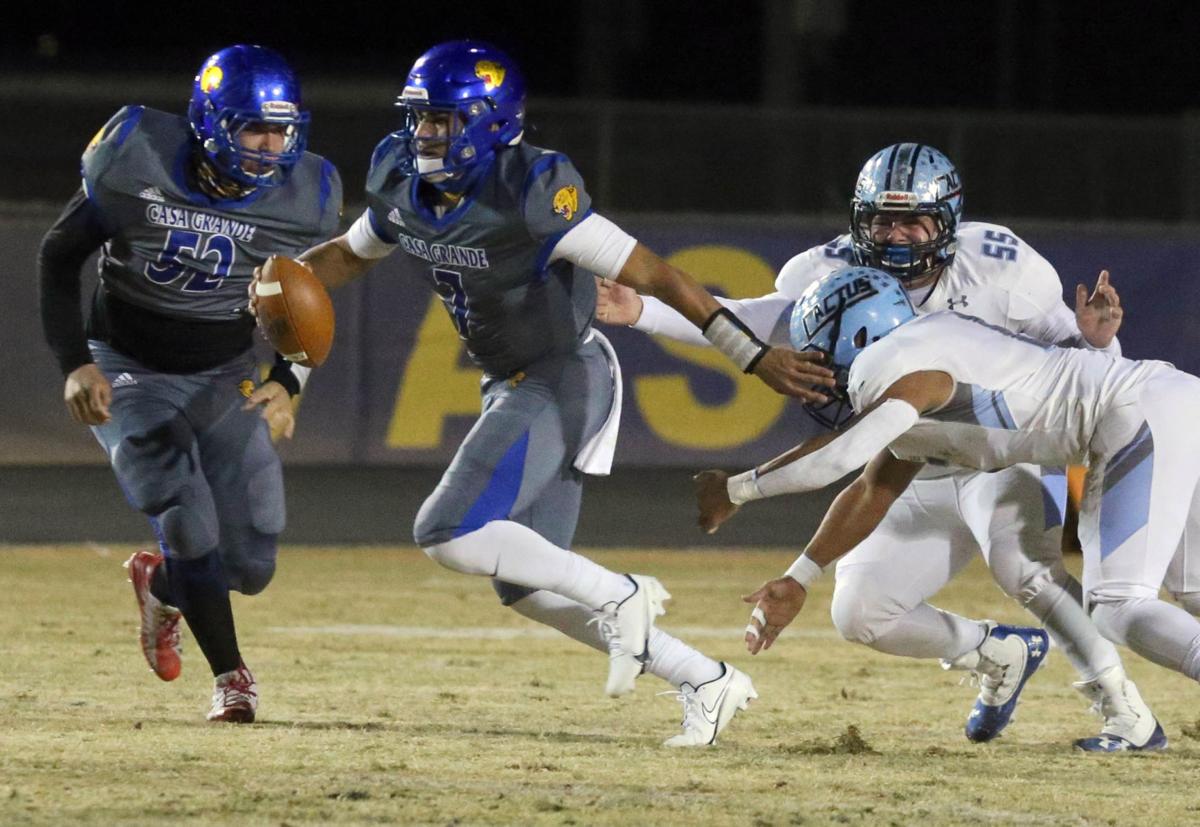 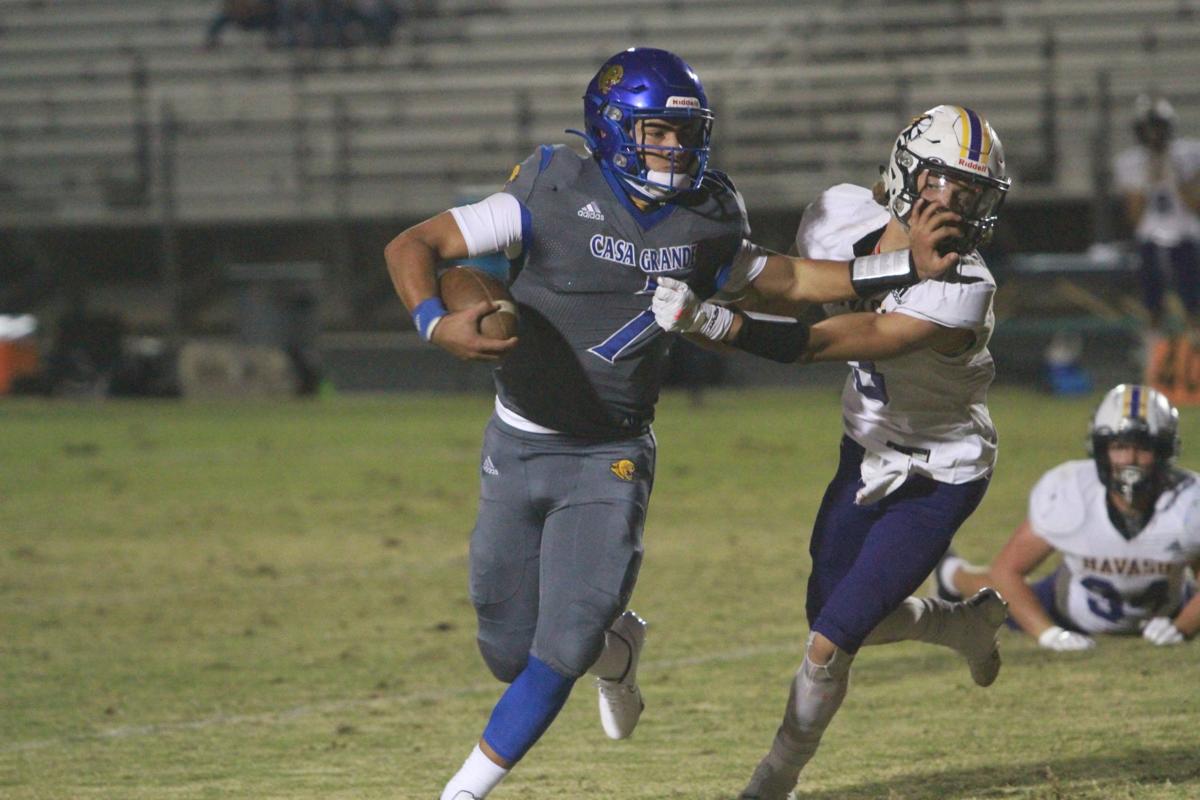 Casa Grande Union quarterback Angel Flores stiff-arms a defender during one of his big runs in a 4A play-in round game against Lake Havasu on Nov. 20, 2020, in Casa Grande.

Casa Grande junior quarterback Angel Flores throws a pass while under pressure during a 4A state semifinal game against Glendale Cactus on Dec. 4, 2020, at Al Van Hazel Stadium.

Casa Grande Union quarterback Angel Flores stiff-arms a defender during one of his big runs in a 4A play-in round game against Lake Havasu on Nov. 20, 2020, in Casa Grande.

CASA GRANDE — Someday soon, a large number of colleges will realize what Angel Flores brings to the table as a quarterback and leader. Until then, he’s pushing forward and meeting every challenge in his own way.

The Casa Grande Union quarterback, a junior, is coming off his best season yet. But while he has more to prove to himself and to others, he’s taking those steps with his actions every day.

He was invited to attend an Elite 11 Regional camp in Los Angeles on June 6.

Elite 11 has been recognized as the premier quarterback camp in the nation for high school quarterbacks. There are eight regional camps across the country, and the best of the best (about 20 players) are eventually chosen to compete in the Elite 11 Finals.

“I’m doing everything I can to get better each and every day — throwing, running ... whatever it takes,” Flores said in a phone interview with PinalCentral.

The thought of competing with some of the top high school quarterbacks in the nation at the Elite 11 Regional has Flores amped. He thrives on being challenged.

Flores was the starting QB on the varsity as a freshman. He handled that high level of responsibility well and has continued to improve each season.

Playing in Casa Grande for the Cougars, Flores hasn’t received the same amount of attention as some of the other top quarterbacks in the state. But he has often risen to the occasion throughout his career.

As a sophomore in 2019, Flores led the Cougars to their first playoff win since 1994. He completed 68.8% of his passes for 2,330 yards and 15 touchdowns with six interceptions. He added another 14 TDs on the ground to go with 912 rushing yards.

After helping lead Casa Grande to a 26-19 win over Sahuarita Walden Grove in the first round of the 2019 playoffs, he matched up with another one of the state’s best QBs — Adryan Lara of Goodyear Desert Edge.

The two sophomores battled in that 4A state quarterfinal game held at Desert Edge, and although Lara was receiving far more college attention, Flores outplayed him. Desert Edge won on a last-second field goal, but Flores shone.

He threw a couple of interceptions in that game, but neither was particularly bad — one was tipped and the other was a good play by Desert Edge’s Andrew Patterson. Flores made plays throughout, completing 17 of 23 passes for 221 yards and rushing for 125 yards and three TDs.

Lara has verbally committed to Washington State, and he had other Power 5 offers from Iowa State, Oregon State and Kansas.

And even though Flores followed up his stellar sophomore year with an even better junior season, he’s still waiting for his first Power 5 offer. Part of that has to do with the COVID-19 pandemic causing chaos with college scholarships and evaluations.

“It’s really hard to offer someone when you haven’t seen them throw in person ... and I understand,” Flores said of not having an ability to do normal campus visits and workouts during the pandemic.

Despite the complications brought on by the pandemic and being overlooked to an extent, Flores is still receiving interest from colleges. He’s already received Division I (FCS) scholarship offers from Northern Arizona and Morgan State in Baltimore.

Several other schools would have offered him by now if not for the wild card that is COVID-19. Some of the schools showing significant interest in Flores are Arizona, Stanford, Fresno State, Rice and Yale.

The next 12 months are very important. Fortunately, Flores isn’t as badly hurt by the COVID-19 scholarship problem as those in the Class of 2021. He still has another year to impress colleges and bolster his resume.

That starts with the Elite 11 Regionals, which provide the best training, skills and competition the country has to offer high school quarterbacks.

Since only highly-accomplished and talented quarterbacks are invited to attend the regionals, it will help Flores’ exposure, since college coaches and scouts from just about everywhere attend the camps.

Flores has clear goals about what he wants to accomplish at the Elite 11 Regionals.

“To go make a name for myself, turn some eyes,” he said.

One area Flores is looking to improve is his ability to read defenses, including understanding blitzes and different formations before the snap.

Asked to grade his junior season, Flores said it was “pretty good,” adding the Cougars accomplished much of what they set out to do.

It’s a fairly humble assessment from a humble guy.

Casa Grande (8-2) entered the 4A state playoffs as the No. 1 seed, and it advanced to the state semifinals for the first time in school history. The Cougars fell short of reaching the title game, losing 35-13 in the semifinals to Glendale Cactus.

With cannon-like arm strength and outstanding athleticism, the physical skills have never been an issue for Flores.

When it comes to his college choices, it won’t be solely about football. Flores is an exceptional student, which is why schools like Stanford, Yale and Rice are interested.

“I will be thinking a lot about life after football and what would set me up after football,” said Flores, who wants to study sports medicine and physical therapy.

Although he may lack prototypical size at the position, Flores is big enough, especially considering how many shorter QBs are succeeding in today’s game.

A shade under 6-2, Flores is taller than NFL guys like Kyler Murray, Baker Mayfield and Russell Wilson, not to mention countless top college quarterbacks. Flores said he weighs 208 pounds and is working to pack on a little more muscle and get in the 215-220 range.

“I want to get bigger, stronger, faster,” Flores said of his goals for the next year.

Another goal includes improving a skill in which he’s already shown unique ability, although it can’t be measured in traditional numbers.

CASA GRANDE — It took guts and toughness, but the Cougars made history Friday, advancing to …