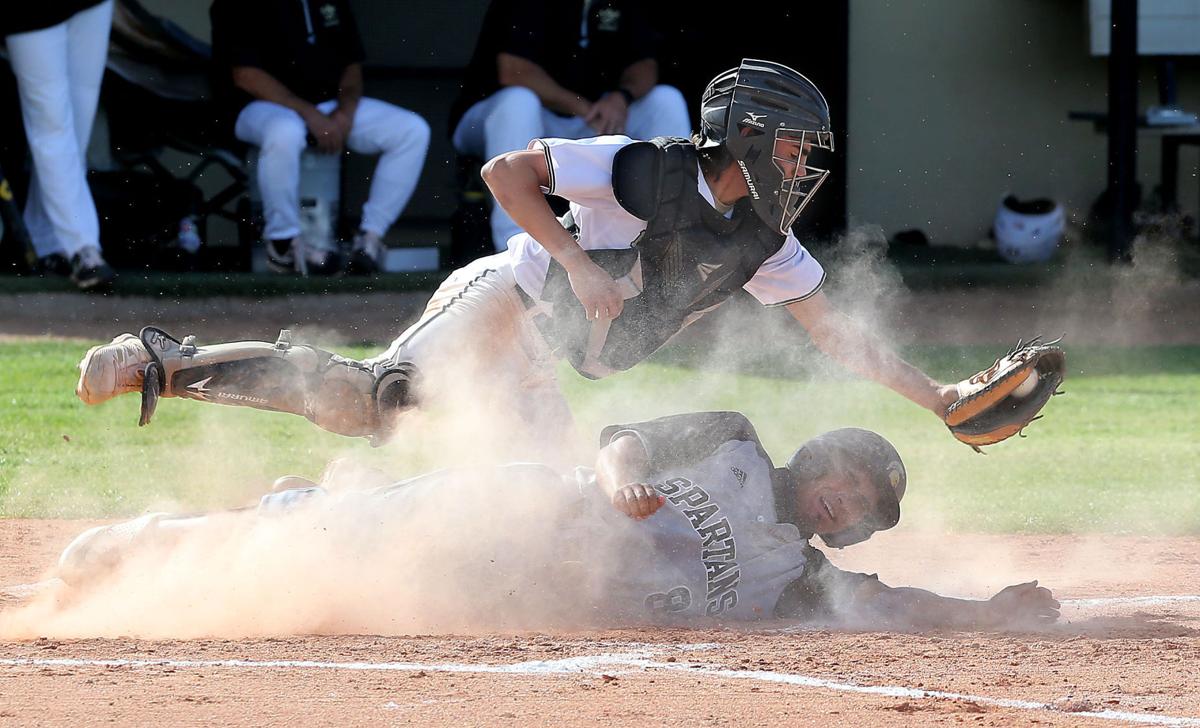 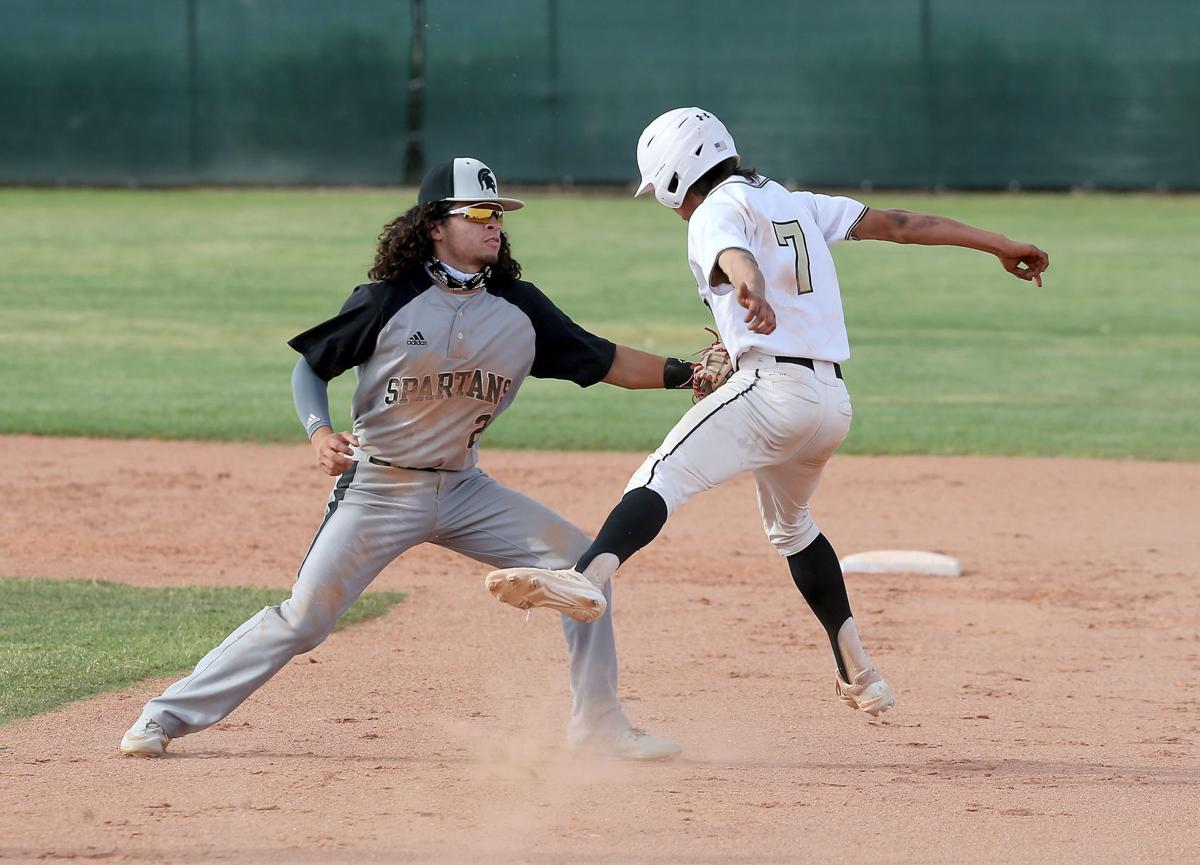 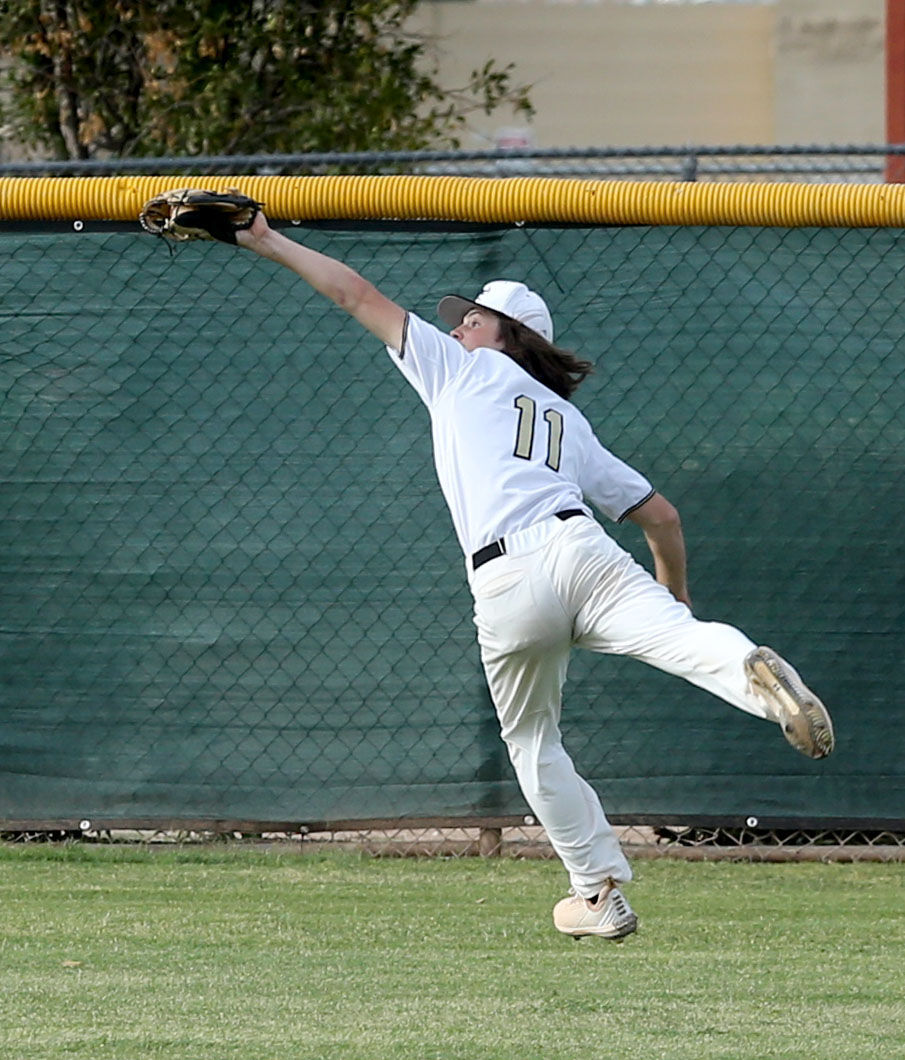 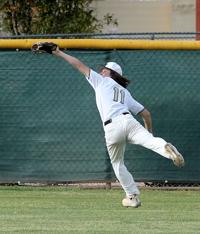 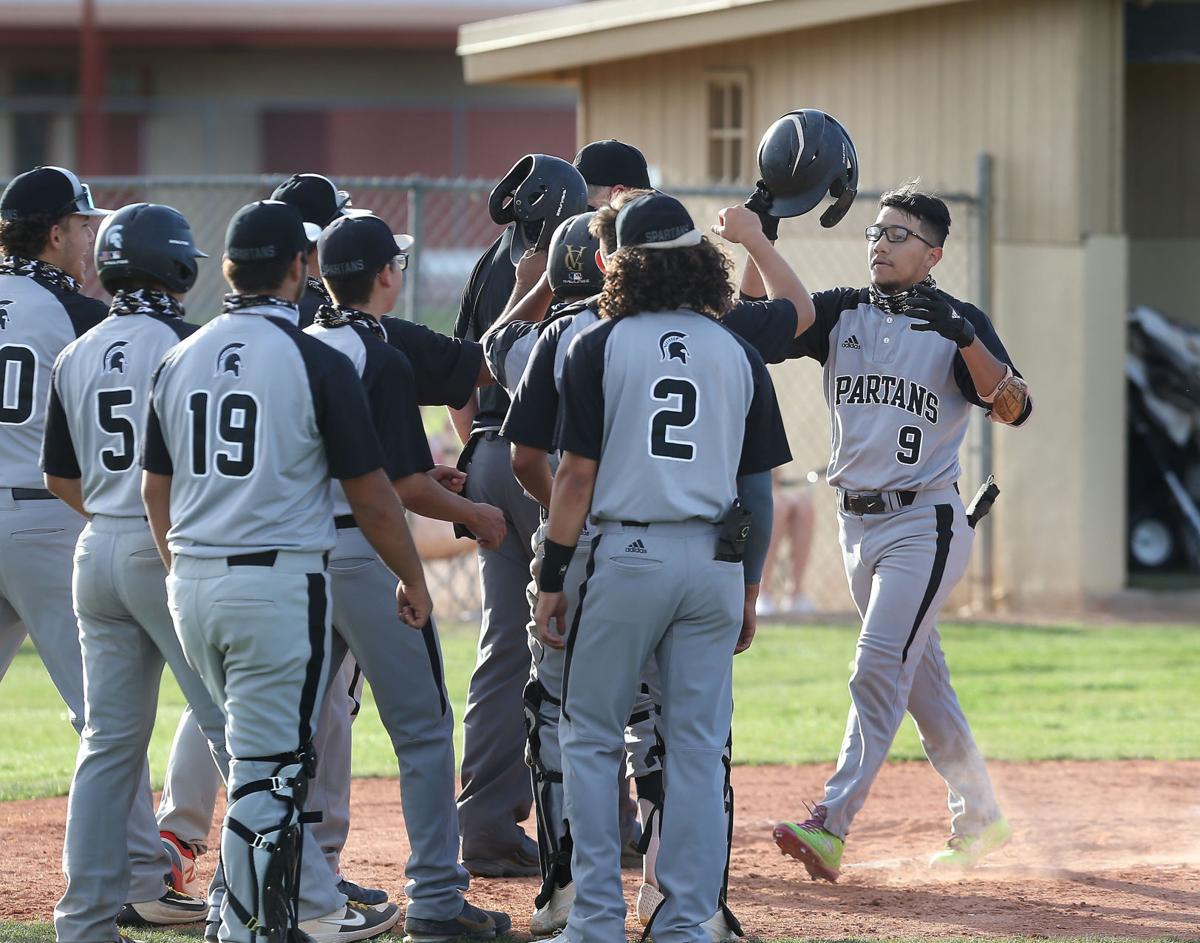 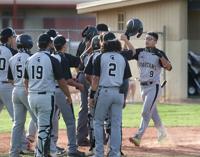 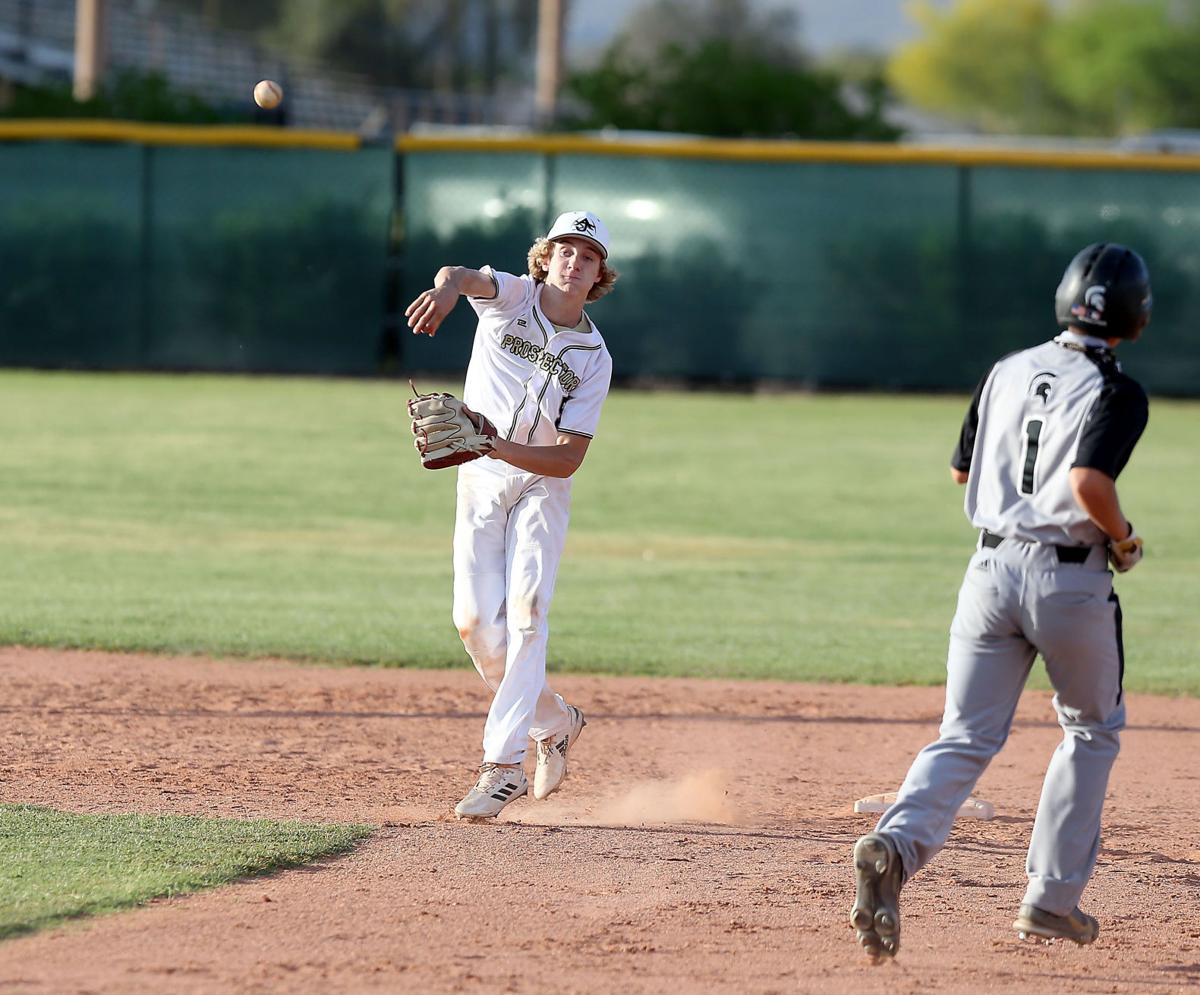 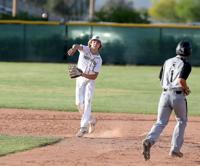 Apache Junction’s Seth Wright, left, gets the force out of Vista Grande’s Sebastian Hidrogo and attempts to complete a doubleplay during Tuesday’s April 13, 2021 game at Apache Junction.

Apache Junction’s Seth Wright, left, gets the force out of Vista Grande’s Sebastian Hidrogo and attempts to complete a doubleplay during Tuesday’s April 13, 2021 game at Apache Junction.

APACHE JUNCTION — The pitching wasn’t in top form for Vista Grande, but its bats led the way in a second straight win over Apache Junction on Tuesday.

While the competition level hasn’t been stellar so far, Vista Grande’s offense has scored 76 runs through its first eight games. No one is swinging a hotter bat than senior Anthony Bolanos, who followed up a five-RBI performance Friday by going 2 for 5 with a home run, double and four RBIs on Tuesday.

Nathan Acevedo started the game for the Spartans, going 1 2/3 innings and allowing four runs on three hits. He struck out three but walked the first three batters of the second inning.

Erubiel Ozuna picked up the slack, throwing the final 4 1/3 innings, giving up one unearned run on four hits with three strikeouts and two walks.

The Vista Grande offense, which barreled up the ball consistently all day, took care of the rest.

“Overall, we like what we’re seeing both offensively and on the mound,” Spartans assistant coach Victor Olivares said. “I don’t think we’ve played anybody really (good) yet, so I think we’re beating teams that we’re supposed to and we’re winning big like we’re supposed to, but we’ve just got to keep it rolling until we face a litter better competition.”

Bolanos had an RBI double in the first inning and smacked a two-run homer to left field in the fifth. He leads the team in slugging percentage (.863), extra-base hits (six) and RBIs (14).

The best inning for the Apache Junction offense came in the second, as Jordan Farrow, Garrett Garcia and Michael Thompson led off the inning by drawing three consecutive walks.

Sophomore Coleson Letteer belted a double off the base of the wall in center, scoring Farrow and Garcia. Junior Seth Wright and Nate O’Brien also had RBI singles in the frame.

“It’s tough. We’ve got some young guys out there, and they’re battling,” he said. “They’ve got to believe in themselves because we believe in them ... they threw a few runs up early on us in the first, and we got down a bit. I just huddled them up in the dugout, got on them a little bit and said, ‘Hey, you guys need to start playing.’”

His players responded, and heading into the third inning, Apache Junction trailed just 7-4.

The star of the game for the Prospectors was Wright, who went 3 for 3 and drove in a pair of runs. He was out of the lineup in Friday’s game due to illness.

“He definitely makes us better; he’s our leadoff hitter, he gets on, he’s got good wheels,” Hutchens said. “He definitely keeps the defense honest, for sure.”

Hutchens added his group is loaded with sophomores (eight of them), which gives him optimism about the future of the program.

For the Spartans, junior Emilio Barreras made some swift defensive plays at shortstop and was 2 for 4 with a double, an RBI and three runs scored. Ozuna had three hits, including a triple, and Johnny Brown, Jayden Fahnholz and Acevedo each collected two hits.

Bolanos continues to be a driving force for Vista Grande after racking up nine RBIs in his last two games.

“He’s hitting well,” Olivares said of Bolanos. “The best part about him right now is he’s hitting the ball to all fields. And today’s home run, the [pitcher] just missed it in, and he hit the ball where it was pitched and took it over the [fence] in left field.”