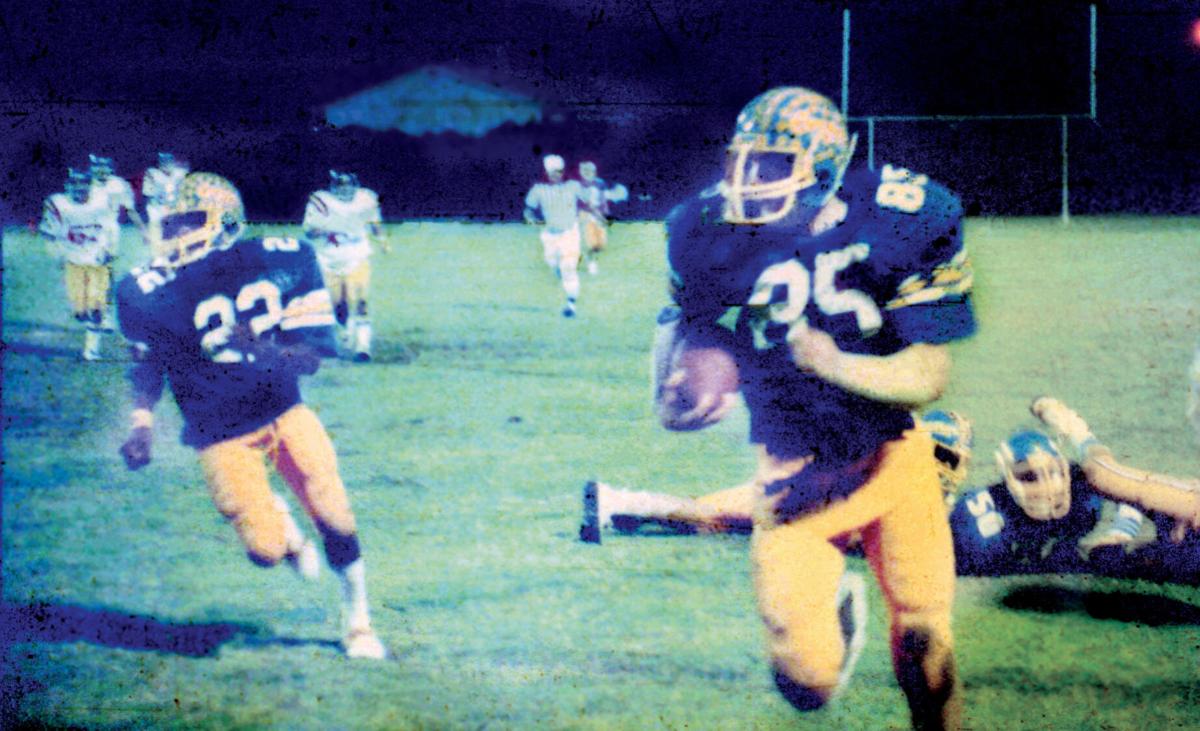 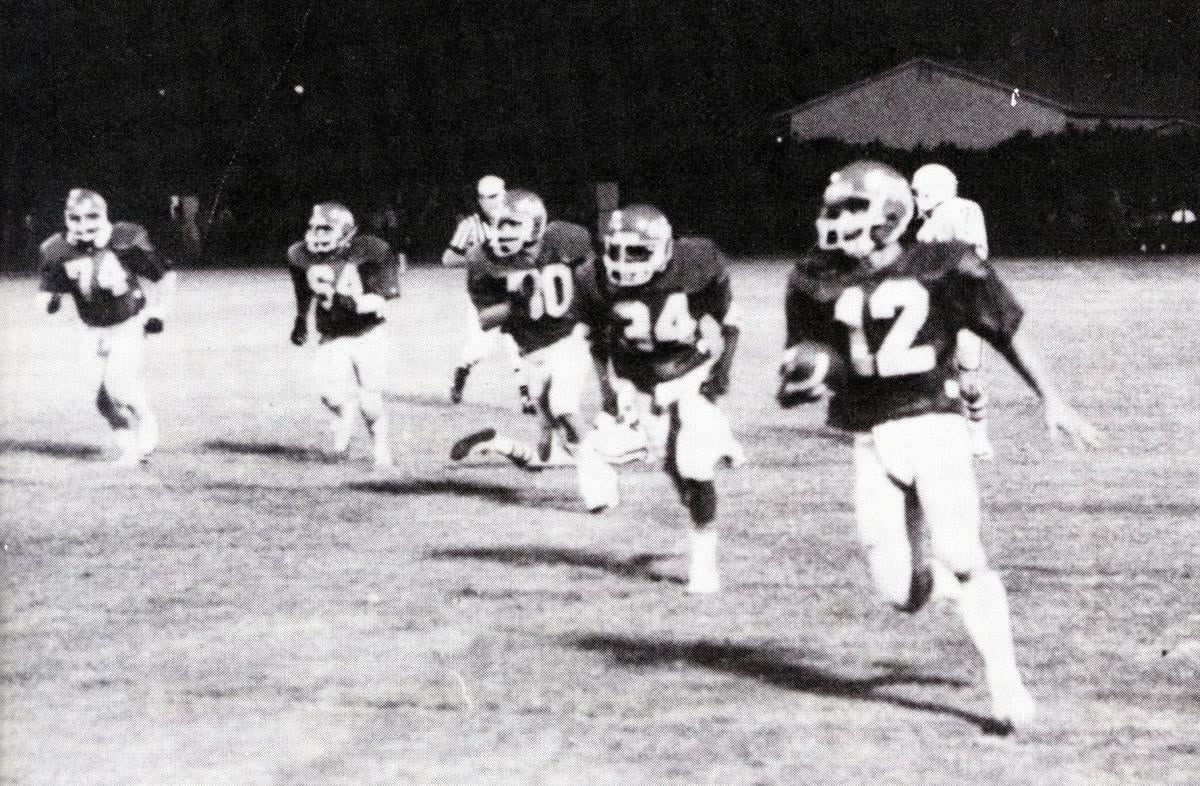 Casa Grande Unions’ Jeff Berryhill, right, carries the ball for a touchdown during the 1983 season. 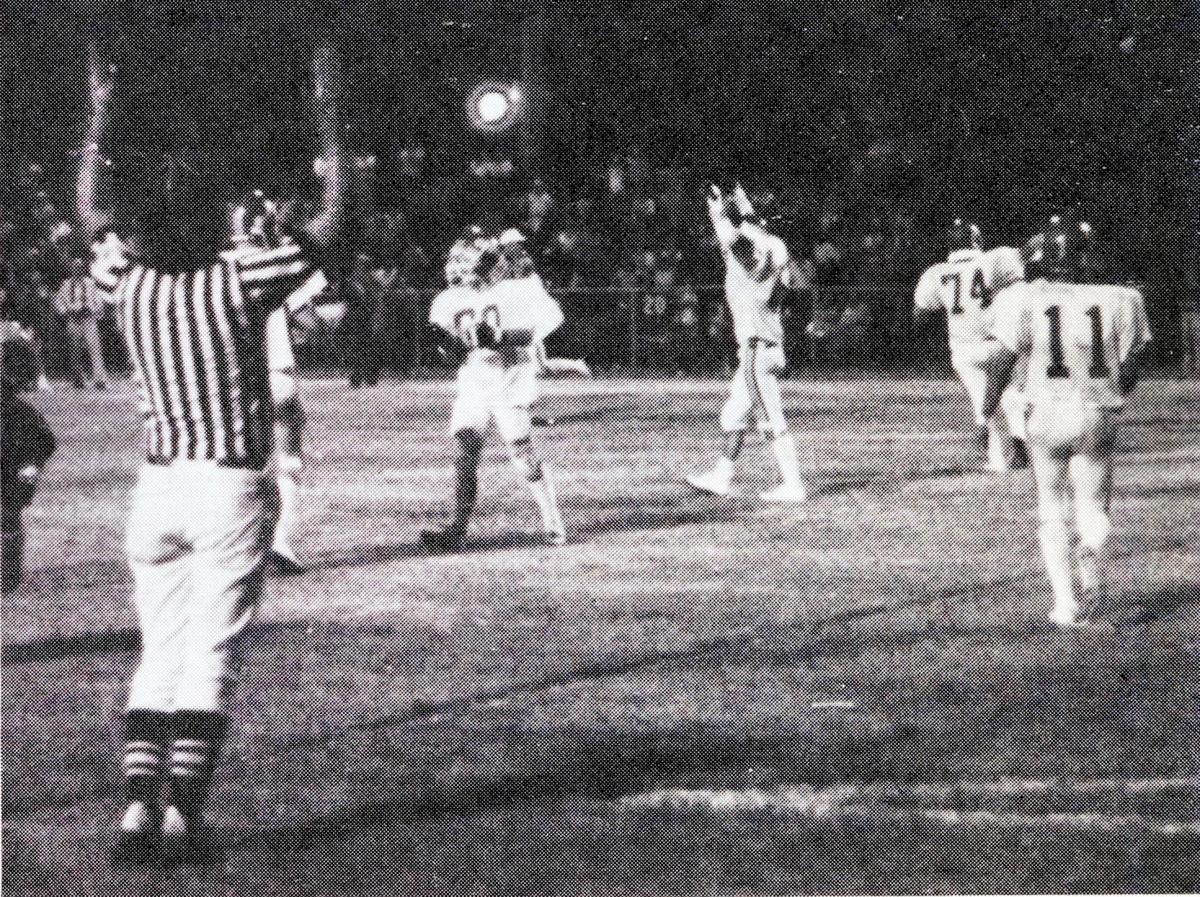 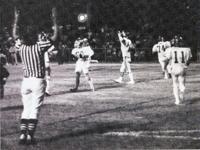 Casa Grande Union scores a touchdown against Nogales winning 34-6 during the 1983 football season. 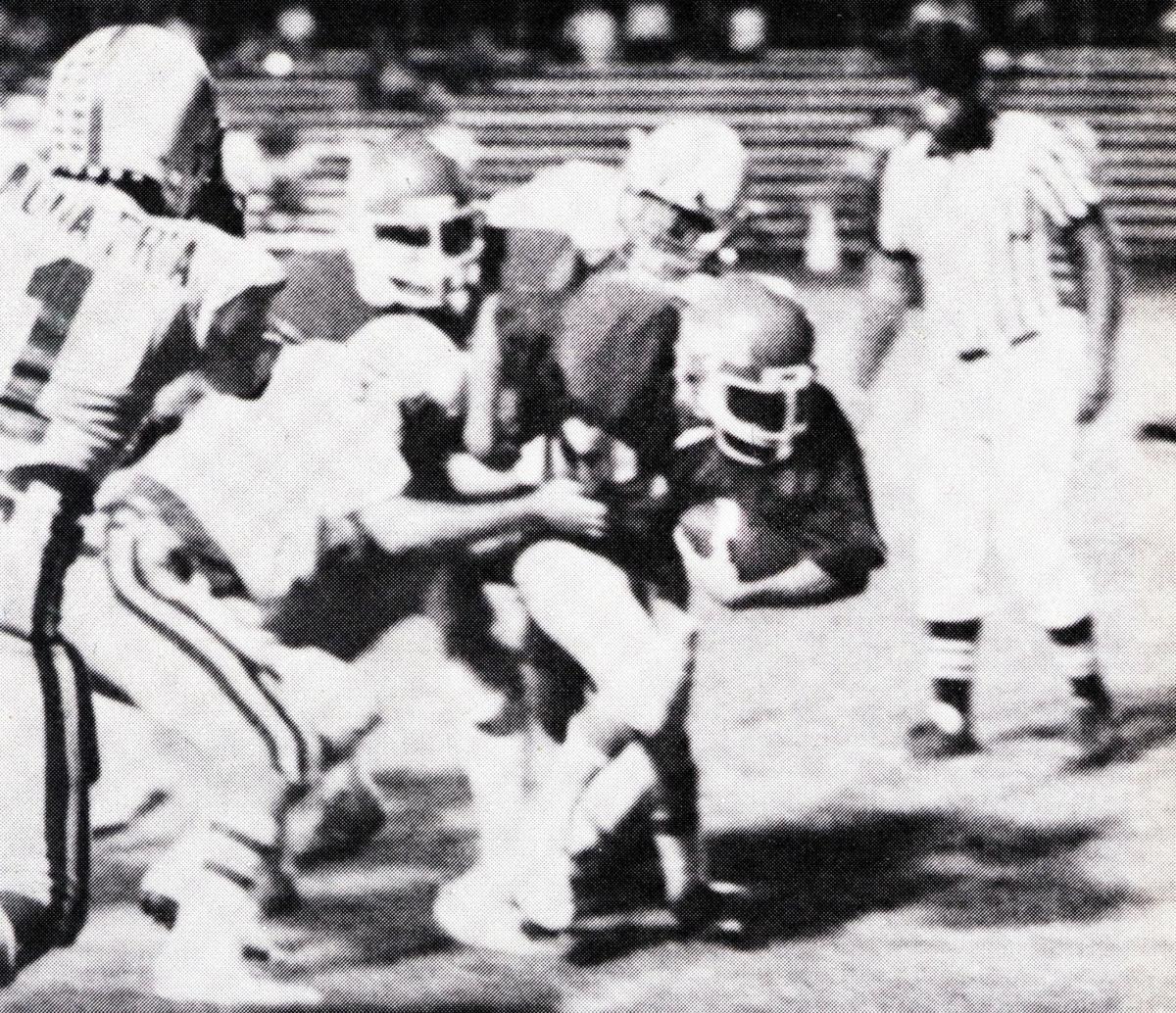 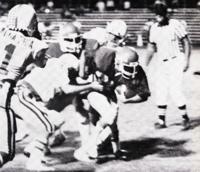 A Casa Grande Union ball carrier gains some yards during the 1983 football season. 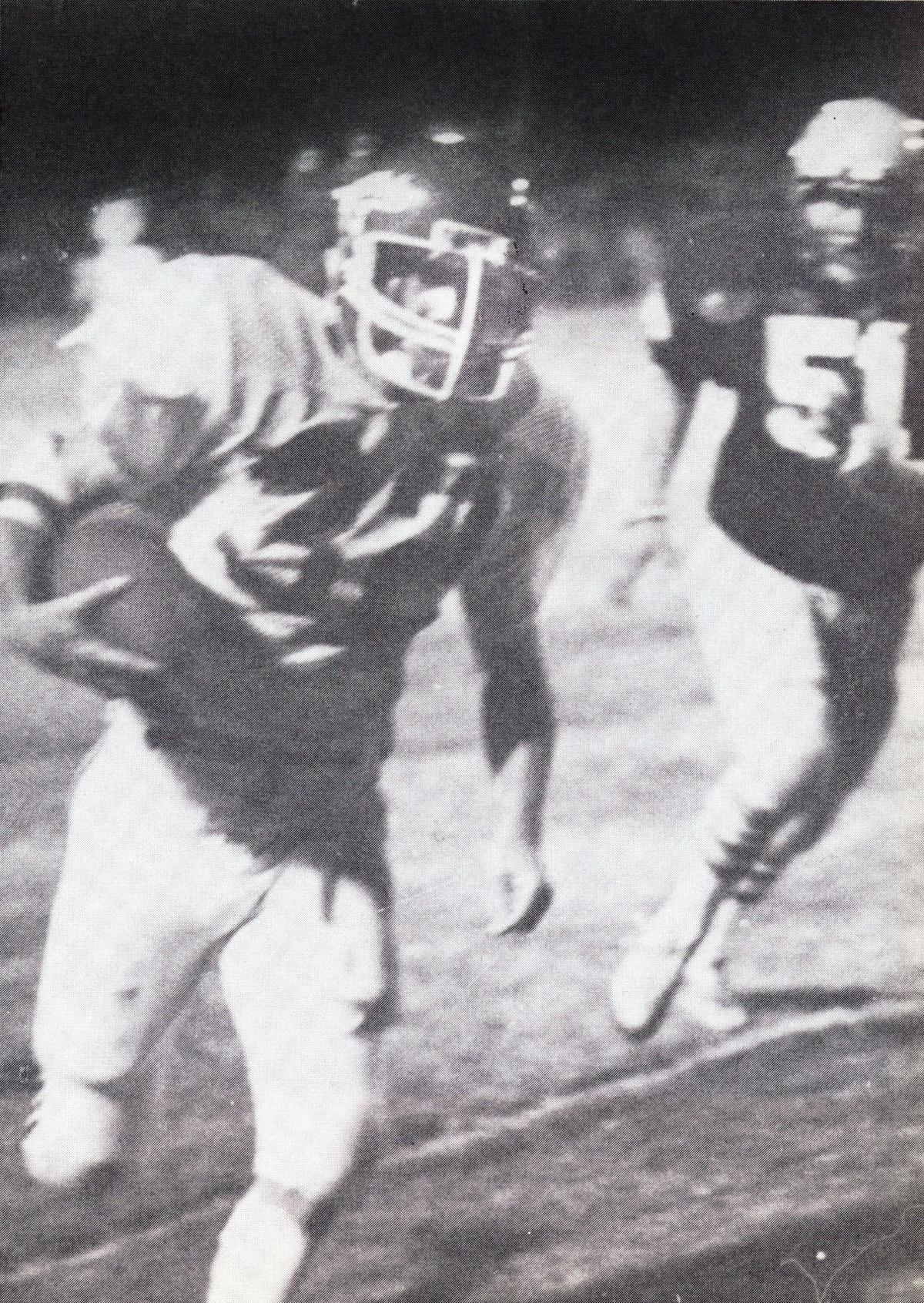 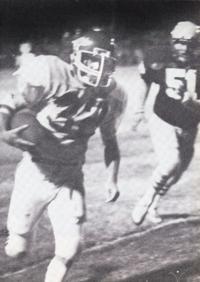 Casa Grande Unions’ Jeff Berryhill, right, carries the ball for a touchdown during the 1983 season.

Casa Grande Union scores a touchdown against Nogales winning 34-6 during the 1983 football season.

A Casa Grande Union ball carrier gains some yards during the 1983 football season.

First of all, let’s set the stage for what made this victory so amazing and so unexpected.

CG Union lost its first nine games in 1982 before defeating Phoenix Carl Hayden 20-14 in the season finale. The Cougars had produced only 26 points total prior to the Carl Hayden game and were held scoreless by five opponents during that miserable stretch, which began with a 34-0 loss at Chandler.

The Wolves came into the 1983 opener with designs on winning a state championship. Quarterback Deke Schutes was the coach’s son, and the youngster — as might be expected — was very adept at running his dad’s option offense.

So it was no surprise that Chandler scored on its first two possessions — on touchdown runs of 43 yards by Schutes and 77 yards by fullback Don Sowell on its next play from scrimmage.

The Cougars stopped two-point conversion attempts following both of the TDs, then made it 12-7 when quarterback Jeff Berryhill ran into the end zone from 7 yards out early in the second quarter to cap a 44-yard, six-play drive.

Chandler responded with ferocity, getting scoring runs of 31 yards by Schutes and 68 yards by Joey Jeffries, along with a two-point run to go up 27-7 with 1:23 left in the first half.

Safe to say, nobody could have predicted what would unfold in the final two periods. Buoyed by big plays on both sides of the ball, the Cougars outscored the Wolves 21-0.

John Kashner, who was CG Union’s head coach for seven seasons from 1979-85, recalled the stunning turn of events during a recent phone interview with PinalCentral.

“The kids dug deep,” he said. “Things started to click, and once that happened there was no stopping them. Not only did that game set the tone for us, it set the tone for the whole community. It made everybody feel good.”

The third quarter began with the CG Union defense forcing Chandler to punt. An 11-play, 86-yard drive followed for the Cougars. The key plays of that march — capped by Brent Kinser’s 4-yard TD run with 4:12 remaining in the quarter — were Berryhill’s 22-yard run and a third-down pass to Anthony Edwards for 8 yards that gave CG Union a 1st-and-goal.

Edwards intercepted a pass on Chandler’s next possession. His 20-yard return set up a three-play, 16-yard TD drive which ended with Kinser’s 2-yard run.

The defense stepped up once again on Martin Monreal’s interception and 35-yard return to the Chandler 45 with 7:45 remaining. Five plays and an extra-point kick later, the Cougars owned a 28-27 lead with 4:33 to play. Berryhill connected with a wide-open Edwards from 31 yards out for the game-tying TD, moments after Tim Ferguson caught a 14-yard pass on 3rd-and-9.

“Any time you can score when your team is down, it’s a great feeling,” Edwards told PinalCentral by phone. “We had a lot of fight. I knew we had it in us.”

Edwards has been the senior director of player development for the Arizona Cardinals since 1999 following a 10-year NFL career with the Cardinals (1991-98) and Philadelphia Eagles (1989-90).

“That game has crossed my mind many times over the years,” Edwards said. “We were able to move the ball in the second half, and the defense stepped up.”

Chandler’s final possession ended when Jimmie Peace, Butch Elliott and Tom Lytle gang-tackled Schutes on fourth down for a 2-yard loss. CG Union proceeded to run out the clock on five consecutive runs by Kinser.

The Cougars finished the season with a 7-3 record.

“Almost everybody was back from the year before,” Kashner said, including the assistant coaches, “and nobody wanted a repeat” of 1982.

Kicking straight on, John Batina — a tight end and linebacker — converted each of his four PAT attempts. He also caught four passes for 51 yards and recovered a fumble midway through the fourth quarter to halt a potential Chandler touchdown drive at the CG Union 20.

“We wanted some payback,” Batina said in a recent phone interview. “That was an awesome night. We had a pretty tight-knit group of guys who had a quiet confidence going in.”

As for his 4-for-4 performance on the PAT kicks: “There wasn’t that much pressure. I felt like I was on autopilot.”

The 17-year-old senior was playing with a heavy heart. His father, Jess, had passed away a month earlier.

Emotions came gushing out, as the Cougars celebrated one of the most unlikely victories in program history. Especially moving was the sight of Batina and Kashner both sobbing with sheer joy as they embraced each other.

“Your dad was up there watching,” Kashner told Batina.

• Hampered by four turnovers, Chandler was limited to 40 offensive plays. Jaime Chacon finished with 17 tackles and one caused fumble. Peace had 12 tackles and a fumble recovery.

• Edwards played in 106 games during his NFL career, scoring five touchdowns and averaging 13.8 yards on 107 receptions. He also averaged 17.1 yards on 33 kickoff returns and 7.4 yards on 43 punt returns.

• Batina was the football coach at Eloy Santa Cruz for two seasons and at CG Union for four. He is currently a physical education teacher and the baseball coach at CG Union, and his 175 wins are the most in program history.