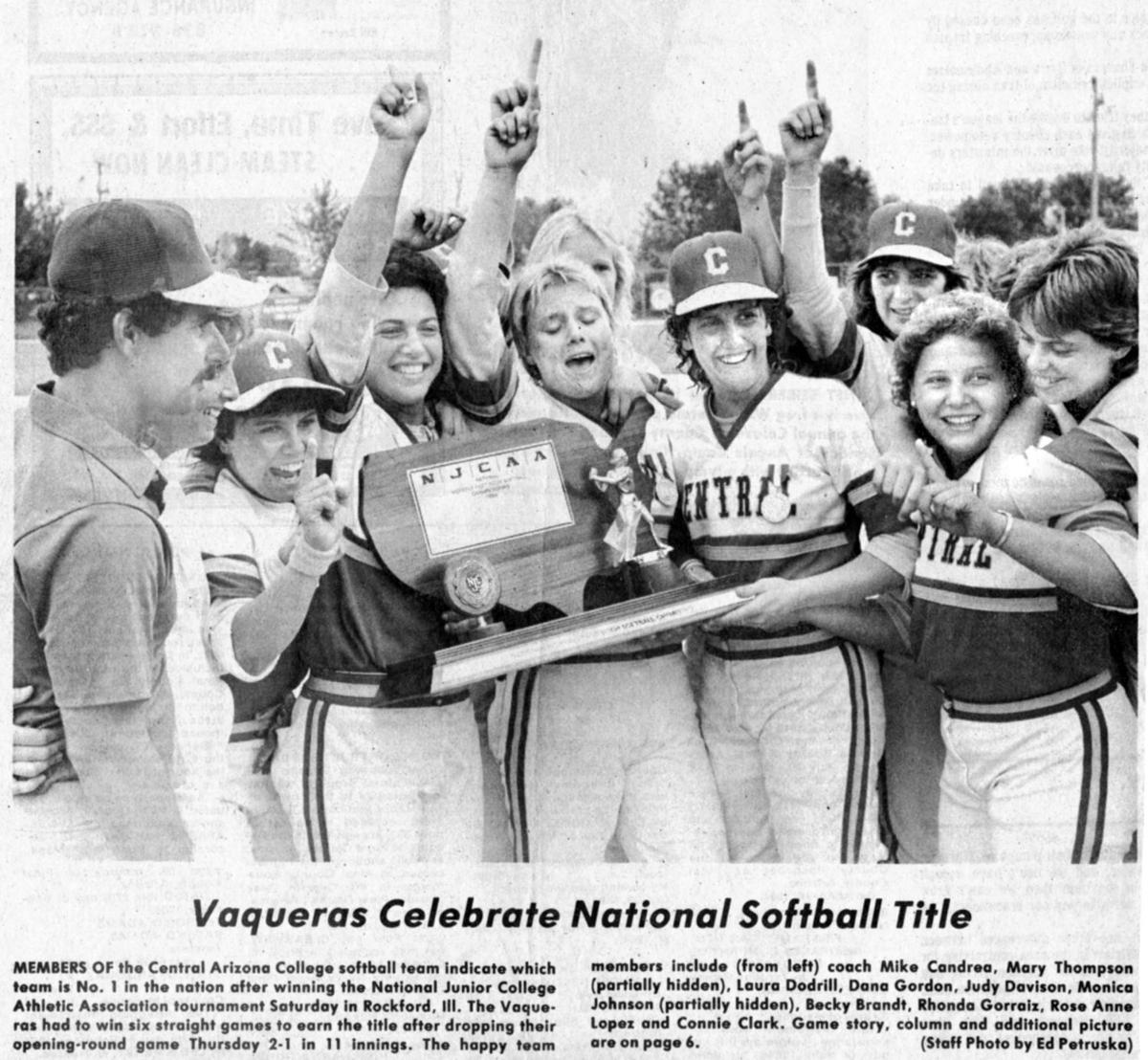 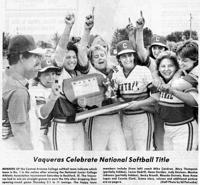 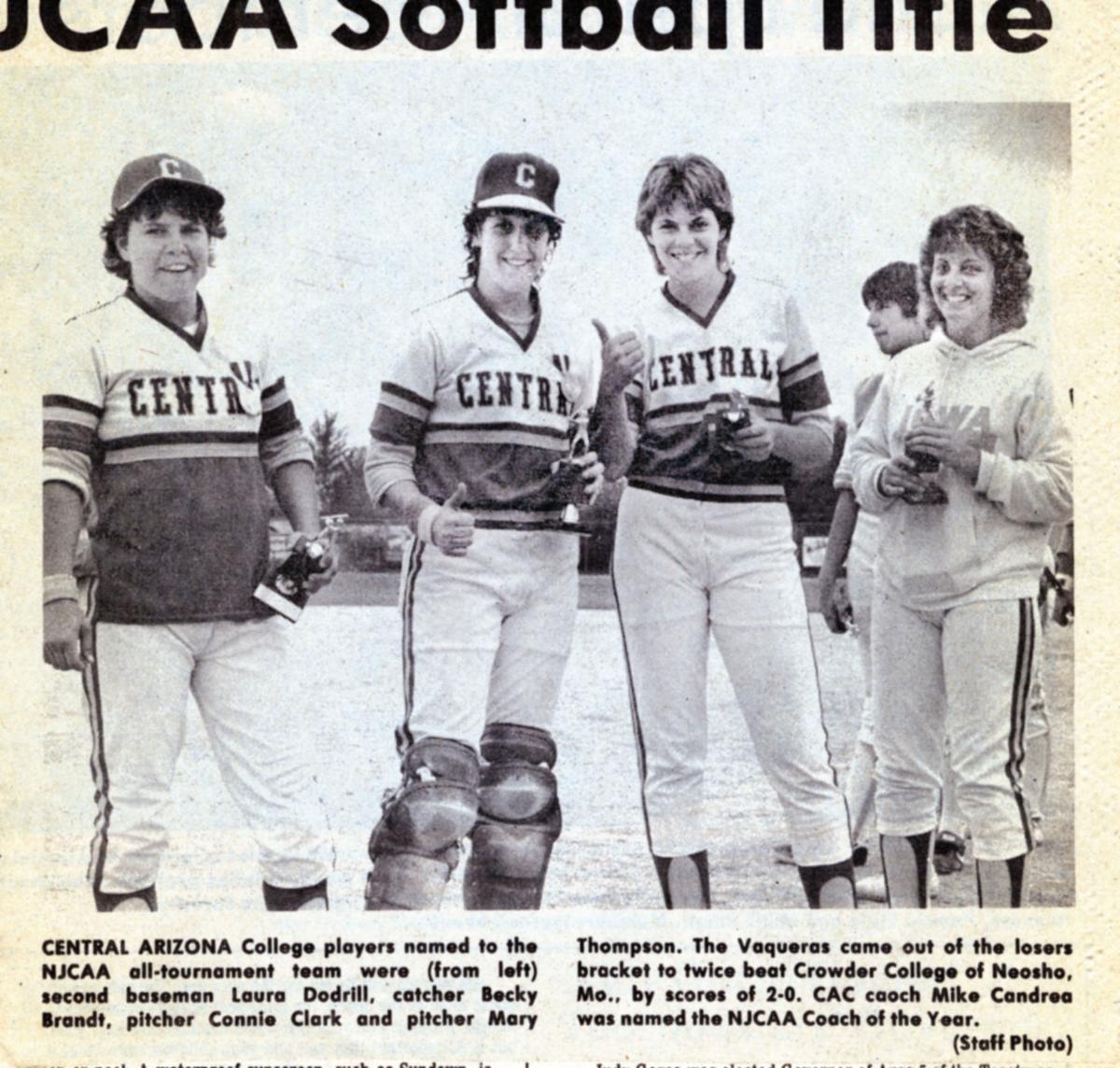 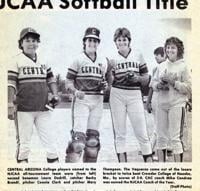 EDITOR’S NOTE: Former Dispatch sports editor Ed Petruska (1979-2016) will revisit on a periodic basis some of the most memorable events he covered. Today’s installment: Central Arizona College wins the first of its record 12 NJCAA softball national championships by defeating Crowder (Missouri) 2-0 on May 19, 1984, in Rockford, Illinois.

Faced with the daunting challenge of needing to reel off six consecutive victories to claim the national title, the Vaqueras did so in spectacular fashion. Following a 2-1 loss in 11 innings to Lake Michigan (Michigan) in Thursday’s opening round of the NJCAA Tournament, CAC pitchers Connie Clark and Mary Thompson held the opposition scoreless for the remainder of the three-day tournament.

All but one of those elimination games were fraught with tension. In reaching the title round, the Vaqueras posted 1-0 wins over Rochester (Minnesota) on Thursday and Waldorf (Iowa) on Friday and defeated Cleveland State (Tennessee) 4-0 in 10 innings on Saturday.

The lone “breather” during that stretch was Friday’s 7-0 victory over Erie (New York). Clark struck out 16 in recording her sixth no-hitter of the season.

A pair of 2-0 wins over Crowder (Missouri) in Saturday’s championship round provided a joyous conclusion to the remarkable run.

“I was waiting for a bug to go through my mind because I was in the air 15,000 feet,” CAC coach Mike Candrea said shortly after the final out. The quote didn’t make a whole lot of sense, but it captured the essence of his jubilation.

The finale ended with Clark registering her 13th strikeout of the game and 69th of the tournament. The right-hander took a no-hitter into the bottom of the seventh inning before surrendering a leadoff single. A two-out error put the potential tying run aboard.

The Vaqueras — who went 42-10 on the season — scored both of their runs in the sixth. After Kim Brown singled with one out, she came around when Crowder misplayed Becky Brandt’s bunt for a three-base error. Monica Johnson’s RBI single provided the all-important two-run cushion.

Crowder came into the opener of the title round with a 22-game winning streak and had not been scored on for 49 consecutive innings. CAC swiftly seized the momentum, however.

Brandt led off the second with a single and took second on Tracy Almhjell’s sacrifice. Denise Adent singled to put runners at the corners. Johnson made it 1-0 with an RBI double and Laura Dodrill drove in the second run with a sacrifice fly.

After that, it was all Thompson. The right-hander struck out eight and limited Crowder to three hits in a game that lasted a mere 56 minutes.

Thompson went 3-0 in the tournament, striking out 40. She hurled a no-hitter in the win over Rochester and a one-hitter against Waldorf.

Pitching in front of her mother and her brother, who traveled to Rockford from her home state of Iowa, Thompson was at her best.

“I really felt the pressure,” she said. “But this is what we were here for – to go for broke. These were definitely some of my best games. I’ve never felt so good in all my life.”

The Saturday morning elimination game was played in a steady drizzle. What a duel it was between Clark (23 strikeouts) and Cleveland State counterpart Kim Gentry — who no-hit Morris County (New Jersey) in the opening round.

With two outs in the top of the 10th, the floodgates opened. Johnson reached on an error. Dana Gordon was beaned. Dodrill singled to drive in a run. Rhonda Gorraiz followed with a two-run single. Judy Davison made it 4-0 with an RBI double.

“That group had a special bond that great teams have,” Candrea said in a recent telephone interview. “We didn’t have any (position-player) superstars, but anyone could contribute on any given day. They were a very hard-working group and loved to play the game.”

Central became the first team in tournament history to claim the title after losing in the opening round.

“As long as you have another game, you have an opportunity,” Candrea said. “The kids just had to go through the process to get there. They were not going to be denied to play for a championship.”

The season was in its very early stages when Clark put on a display for the ages. She pitched all 17 innings in CAC’s 2-1 victory over Glendale on Feb. 29, striking out 32 without issuing a walk.

Clark was asked about that game during an interview on the eve of NJCAA Tournament play.

“That was a long one. I felt strong and I could have gone more innings,” she said.

“I’m in my own little world out there,” Clark went on to say. “I can’t show emotion because the batter will pick up on that, plus it will get to you. My main word is ‘relax’ if you get too tense.”

With Clark in the circle and Candrea calling the shots, the Vaqueras posted a 56-7 record in 1985 and repeated as NJCAA champions. Both left CAC after that season and went on to further greatness.

Clark never got to compete in the Olympics; she was 31 years old when the sport made its debut in the 1996 Atlanta Games. But after six years as a Florida State assistant coach, Clark was named the inaugural head coach at the University of Texas-Austin.

During his 35 seasons at Arizona (Candrea took leaves of absence in 2004 and 2008 to coach the U.S. Olympic team), the Wildcats have won eight national championships in 23 WCWS appearances. Only UCLA (12) has accumulated more titles. His winning percentage at Arizona is .795 (1,633-421-2).

Candrea’s Olympic teams took the gold medal at Athens in 2004 and the silver at Beijing in 2008.

Candrea turns 65 in August. Although “this COVID has changed everything,” he has no immediate plans to retire.

“I’m closer to the end than I am the beginning but I still enjoy what I’m doing,” he said.

SIGNAL PEAK — Some sports truisms are virtually inarguable, such as this one: Mike Candrea is the GOAT softball coach. How did he attain that …